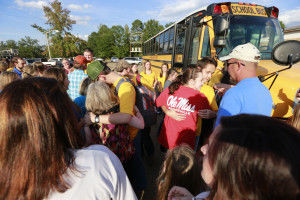 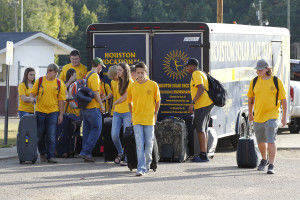 Buy at PHOTOS.DJOURNAL.COMParents get one last hug before the Houston High School Solar Race Team leaves for Australia to compete on Wednesday.

Buy at PHOTOS.DJOURNAL.COMParents get one last hug before the Houston High School Solar Race Team leaves for Australia to compete on Wednesday.

HOUSTON – Fourteen students stepped onto a big yellow school bus Wednesday afternoon, Oct. 7, for the first leg of a trip that had them chasing the Sun west to Australia to compete in the World Solar Car Challenge.

The Houston Solar Car has won 14 national solar car races in a row and now steps onto the world stage to race against universities and corporations in a 1,800-mile trek across the Australian Outback from Darwin to Adelaide. The Houston Solar Car is a product of the Houston School of Science and Technology.

“I'm not as anxious as I thought I would be and I think everyone is ready to get to Australia and start racing,” said Team Captain Allyson Taylor, a senior at Houston High School. “We've been planning this trip for over a year. Once we get on the airplane, I think we will be Ok.”

The team flew out of Memphis at 10 a.m. Wednesday for a six-hour flight to Los Angeles. From there it is a 20-hour flight to Sydney and another six hours to Darwin. In Darwin the team has set about the businesses of getting Sundancer, their solar car, in shape for the race.

The car was shipped over to Australia more than a week ago with an advance team of adults and solar car guru and Houston High School Electrical Engineering teacher Keith Reese.

“We have built a better and stronger solar car than we have ever had before,” said junior Hunter Moore, who is a mechanic and driver of Sundancer. “We've got a better solar array, better batteries, better motors. We've also trained hard for this race. We are a ready as we can be.”

“We've got a lot of different people on this team this year and we have a lot of juniors,” said Moore. “We are definitely excited about this. I've never seen a kangaroo in person in the wild.”

And solar car racers will get their chance to see kangaroo’s “in person” as they will camp out each night of the race on the roadside in the Australian Outback.

“It's going to take teamwork to compete in this race,” said Taylor. “We have gotten this town and community behind this and a lot of people from across Northeast Mississippi and the state have donated to us to help us pay for this trip.”

Taylor pointed out she has been outside the country once but many on the team have never been outside the U.S. She said she is confident the diverse group of students will pull together and focus on the race when Sundancer hits the road.

She also said this is the trip of a lifetime and the crew hopes to have a little fun.

“I've already had my best friend tell me I need to bring her back a boomerang,” said Taylor. “I've also had people joke an tell me to bring them back a kangaroo, but I don't think that is going to happen.”

“Let us win this race first and we'll find some time to go shopping and do a little sight-seeing in Sydney,” she added.