Print and Online Subscriptions to the Chickasaw Journal with online e-Edition Access. Print prices are for in-county subscriptions. Please call 662-456-3771 if you are out-of-area and would like to subscribe. 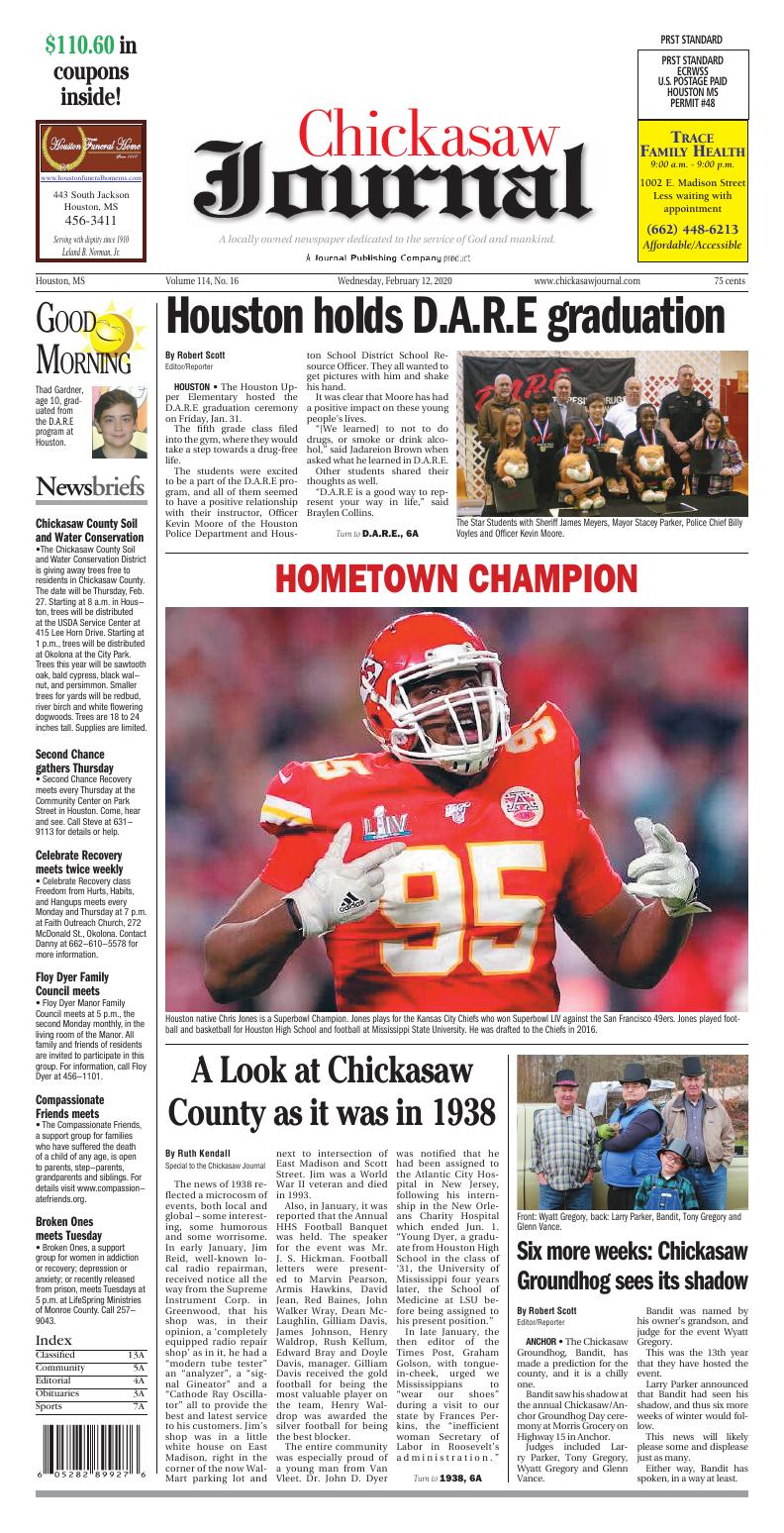 The fifth grade class filed into the gym, where they would take a step towards a drug-free life.

The students were excited to be a part of the D.A.R.E program, and all of them seemed to have a positive relationship with their instructor, Officer Kevin Moore of the Houston Police Department and Houston School District School Resource Officer. They all wanted to get pictures with him and shake his hand.

It was clear that Moore has had a positive impact on these young people’s lives.

“[We learned] to not to do drugs, or smoke or drink alcohol,” said Jadareion Brown when asked what he learned in D.A.R.E.

Other students shared their thoughts as well.

“D.A.R.E is a good way to represent your way in life,” said Braylen Collins.

“I think it’s a good model to show kids, like teens for example to stop doing drugs, and I liked D.A.R.E, it was very interesting,” added Gabi Moore.

There were 148 students who graduated from the program. Among these were the Star Students, who were chosen by an essay contest. These students were, Katy Tabb, Jayden Kinson, KB Gregory, Vanity Gathings, Millie Gann and Thad Gardner.

These students read their essays to the audience, and got special medals and other treats.

“I though D.A.R.E was very helpful to all of us kids, just to help us learn about drugs and awareness of all the bad things that can hurt us,” said Reagan Kilgore.

Chickasaw
A Look at Chickasaw County as it was in 1938
By Ruth Kendall Special to the Chickasaw Journal
02.13.20

The news of 1938 reflected a microcosm of events, both local and global – some interesting, some humorous and some worrisome. In early January, Jim Reid, well-known local radio repairman, received notice all the way from the Supreme Instrument Corp. in Greenwood, that his shop was, in their opinion, a ‘completely equipped radio repair shop’ as in it, he had a “modern tube tester” an “analyzer”, a “signal Gineator” and a “Cathode Ray Oscillator” all to provide the best and latest service to his customers. Jim’s shop was in a little white house on East Madison, right in the corner of the now Wal-Mart parking lot and next to intersection of East Madison and Scott Street. Jim was a World War II veteran and died in 1993.

Also, in January, it was reported that the Annual HHS Football Banquet was held. The speaker for the event was Mr. J. S. Hickman. Football letters were presented to Marvin Pearson, Armis Hawkins, David Jean, Red Baines, John Walker Wray, Dean McLaughlin, Gilliam Davis, James Johnson, Henry Waldrop, Rush Kellum, Edward Bray and Doyle Davis, manager. Gilliam Davis received the gold football for being the most valuable player on the team, Henry Waldrop was awarded the silver football for being the best blocker.

The entire community was especially proud of a young man from Van Vleet. Dr. John D. Dyer was notified that he had been assigned to the Atlantic City Hospital in New Jersey, following his internship in the New Orleans Charity Hospital which ended Jun. 1. “Young Dyer, a graduate from Houston High School in the class of ‘31, the University of Mississippi four years later, the School of Medicine at LSU before being assigned to his present position.”

In late January, the then editor of the Times Post, Graham Golson, with tongue-in-cheek, urged we Mississippians to “wear our shoes” during a visit to our state by Frances Perkins, the “inefficient woman Secretary of Labor in Roosevelt’s administration.” Seems she was scheduled to speak in Hattiesburg and Golson wanted children and adults to wear their best Sunday-go-to-meeting shoes while “Sister Perkins is in our midst. It will not do for Ma Perkins to go back to Washington and say that she was right in saying ‘Southern chillun did not have shoes’. We must be on our best behavior while she is in our midst as we have a reputation to uphold”. Golson did not have a problem with speaking his mind and political correctness be --------.

By early March, the news from across the ocean was beginning to sound ominous. It was reported that “Adolph Hitler of Germany made his impassioned demand for return of Germany’s colonies in a three-hour speech Sunday. Foreign Secretary Anthony Eden of Great Britain resigned immediately afterward, causing a crisis in the British cabinet. He differed with Prime Minister Chamberlain over policies dealing with Hitler. Chamberlain is willing to dicker with Hitler and Eden was not. Parliament voted on Tuesday a policy to conciliate the dictators. The United States is watching.”

I found this article to be most interesting. The title was “Chickasaw Handles Go to Many Countries” – and it continued “to England, Sweden, South America, East Africa and China – in fact more than 879,000 handles from Chickasaw County last year. That amounted to more than 50 box carloads and they all went from the E. F. Dyer Manufacturing Company of Van Vleet, Miss.” I can remember long ago, when I was in Miss Ora Felton’s Latin Class and she was trying to convince us Latin students that it really was a good decision to take her class, she told of helping the folks at E. F. Dyer translate the orders they received from all over the world. And because Latin was the ‘mother of all languages’ she was able to help them.

There were several interesting articles about early telephone service in Houston. Mind-blowing descriptions when you think of how far we have come in just over 81 years. First of all, Dr. J. Rice Williams, a well-known physician who today would probably be referred to as a radiologist, owned the first telephone system in Houston. The magazine, “Southern Telephone News” reported the conversion of the Houston Exchange from magnetic to common battery and an interview with Dr. Williams. He placed the second long distance call over the new exchange (allowing Mayor Ashton Toomer to do the honors for the first). Dr. Williams said when he moved to Houston, he bought a six-drop switchboard and had one subscriber. The switchboard was in the Post Office and when the post master went home, he plugged the subscriber in so that Houston would have an outside connection. The size of the switchboard continued to increase. He later had a ‘grounded system’ i.e. one wire was strung on poles and grounded the other side of the telephone. Subscribers could not talk so well, he stated, but they had the pleasure of listening to all conversations in town. This switchboard was located in Dr. Williams’s home, later being moved to the 2nd story of the Tabb Drug Store building where it remained until 1938. Now, just read the instructions for Houstonians to use their new telephone system: “To recall the operator on a connection, move the receiver hook up and down slowly until the operator answers. If you jiggle the hook, the operator cannot see the signal. Do not hang up the receiver until you have finished with the connection as this gives the operator a signal to disconnect. If the person or firm you wish to call is not listed in the directory, call “Information”. If you are a party line subscriber and wish to call another party on your line, do not give the operator the complete number of the telephone wanted. Just say “I want to talk to ‘J’ on this line or ‘M’ as the case may be. As soon as the operator has acknowledged your request, hang up the receiver long enough for the operator to ring the other telephone. Then remove the receiver and wait for the other telephone to answer. Your cooperation in consulting the directory before calling and in using the service properly, will enable us to render the best possible service”. Signed by L. E. Slawson, Manager, Southern Bell Telegram and Telegraph Co., Inc.” Now, I ask you – would you talk on the telephone or throw it out the window in frustration??

In May, there was a report as follows: The Army and Navy are cooperating in preparing a new air-defense outpost far out in the Pacific at Midway Island. Aerial surveys have been completed for a harbor channel and seaplane base to cost upward of two million dollars. After the work has been completed in about two years, similar work is contemplated upon Wake Island.

In the July 14th issue, an article announced the Houston Hospital’s plans for an anniversary celebration. Various speakers were invited from here and yonder but the interesting part stated that “the Houston Hospital was organized and chartered in 1919 by a group of interested citizens and doctors in order to provide adequately for the medical and hospital needs of Chickasaw and surrounding counties. On July 19, 1920, the new building was occupied and patients admitted for treatment. The program was in the charge of a committee composed of Dr. J. M. Hood, Houlka; Dr. E. K. Guinn, McCondy and Dr. W. J. Aycock, Calhoun City.

In late August, an article began with “Marshall Alexander After Fast Drivers” It continues with “Means business does Marshall Jim Alexander, who has declared war on fast drivers in the city limits. Too many people are disregarding the town’s ordinance against fast driving on the streets, declares the Marshall. You are advised that the speed limit is 25 MPH in town and that we are going to try to enforce this law, he warns. If you are in the habit of breaking it, do not be surprised to find yourself being called before the Mayor. This will apply to all who break the law, regardless of who they may be. Please slow down and avoid paying a fine.”

ANCHOR • The Chickasaw Groundhog, Bandit, has made a prediction for the county, and it is a chilly one.

Bandit saw his shadow at the annual Chickasaw/Anchor Groundhog Day ceremony at Morris Grocery on Highway 15 in Anchor.

Bandit was named by his owner’s grandson, and judge for the event Wyatt Gregory.

This was the 13th year that they have hosted the event.

Larry Parker announced that Bandit had seen his shadow, and thus six more weeks of winter would follow.

This news will likely please some and displease just as many.

Either way, Bandit has spoken, in a way at least. 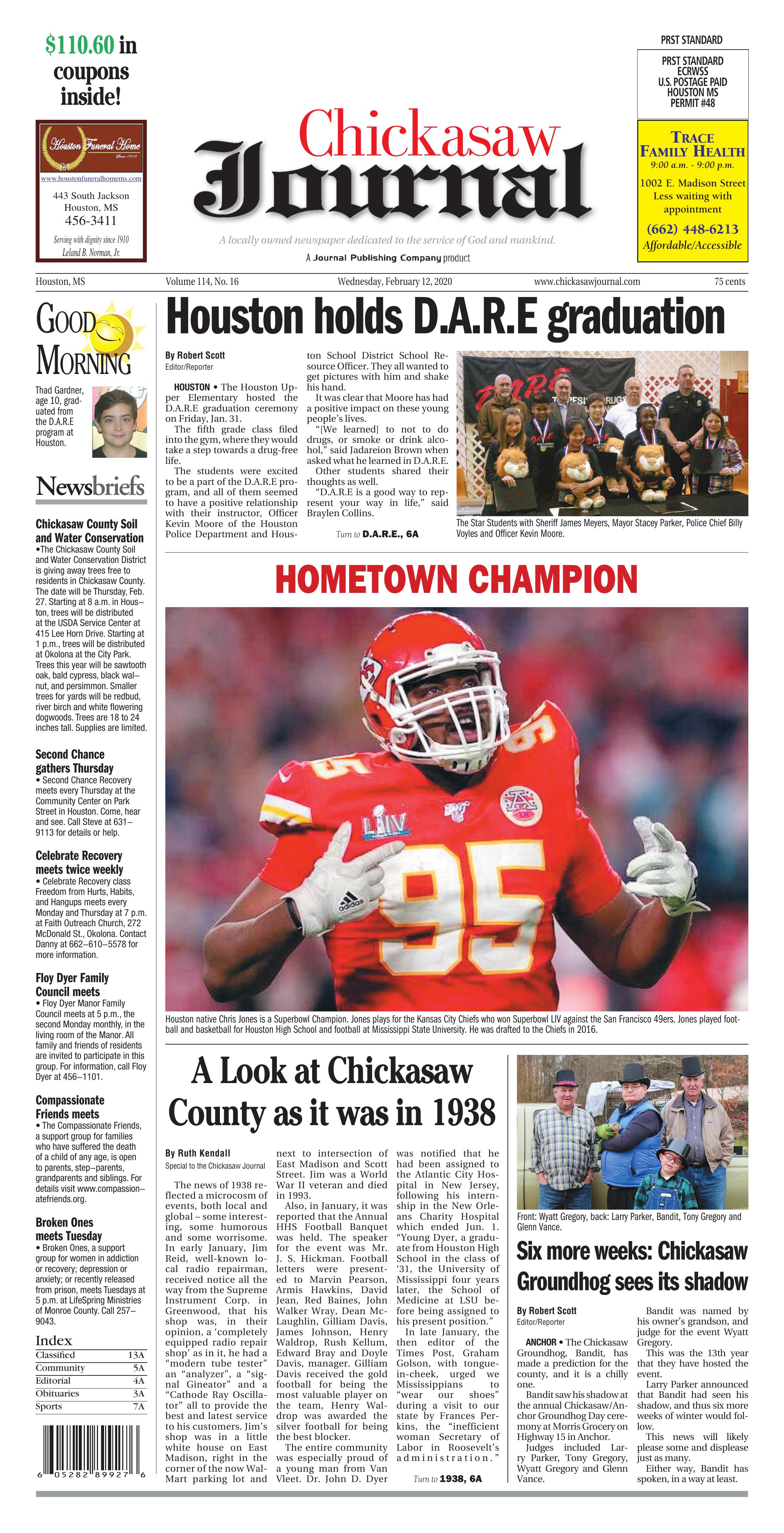