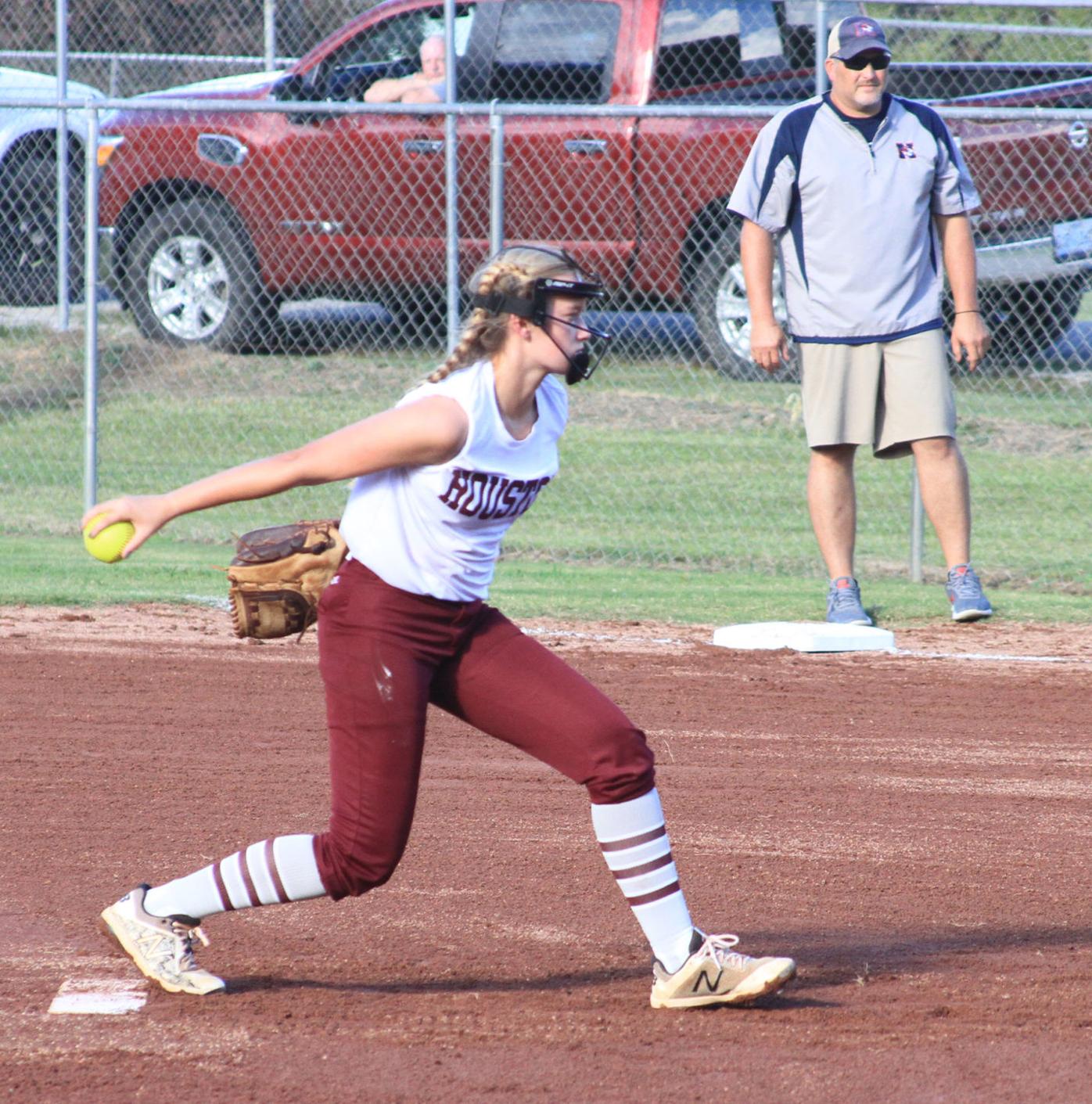 Houston pitcher Maegen Carr (5) sends the ball to the plate in the Lady Toppers game with Nettleton last week. 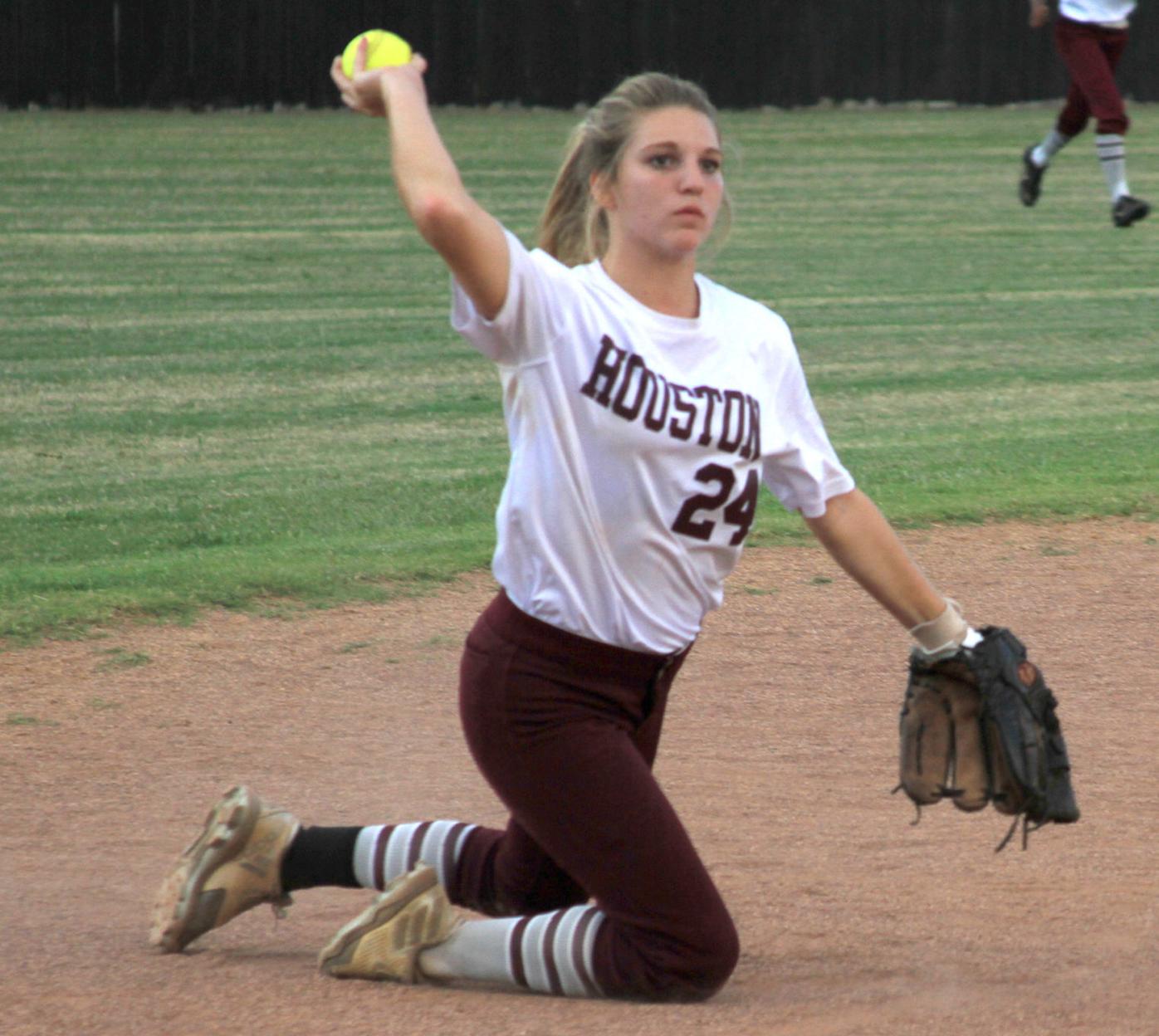 Houston’s Jordyn Moore (24) scrambles and comes up with the ball in the Lady Toppers game with New Hope.

Houston pitcher Maegen Carr (5) sends the ball to the plate in the Lady Toppers game with Nettleton last week.

Houston’s Jordyn Moore (24) scrambles and comes up with the ball in the Lady Toppers game with New Hope.

HOUSTON – After a district win on Tuesday, the Lady Toppers of Houston were back in division play on Thursday as they hosted division frontrunner Nettleton.

And in a game that showed Houston’s recent struggles at the plate, the Lady Toppers fell to the Lady Tigers 3-2.

Nettleton drew first blood in the opening inning as they plated their first run, but after this run, the Houston defense and pitching, behind Maegan Carr on the mound, played fantastic all night. Besides the run in the first inning Houston held the explosive Lady Tigers scoreless for the next three innings.

Houston, while strong on defense, struggled at the plate. With Nettleton walking Aquana Brownlee each plate appearance, it was up to her teammates to make the offense run, and it wasn’t to be on this night.

While the Lady Tigers were held at bay including five total strikeouts, Houston couldn’t scratch runs across.

Runners got on base for Houston on the night, but they could find the big hit, only managing 10 hits throughout the game.

While Houston battled, the wind was taken out of their sails in the fourth. As Paige Kilgore, Georgia McMullen and Jasmine Rogers loaded the bases with no outs, three straight popouts, including two on the infield, kept the Lady Toppers off the board.

Nettleton tacked on two more runs on a two-run home run in the fifth to extend their lead, and in the seventh Houston was down to their last chance.

And after a double by Jerilyn Jenkins, single by Anna Claire Kirby and an RBI single by Maegan Carr that nearly left the yard, Houston was on the board. Following a walk to Brownlee, Jordyn Moore kept the rally going with a smash that scored Kirby.

With the bases loaded, Kilgore was up with a chance to win, and with a crack of the bat, she gave the ball a ride to the wall but it fell in a Nettleton glove for the final out of the game.

“Two runs in a slow-pitch softball game is embarrassing,” Houston head coach Derick Kirby said after the game. “I’m not saying our kids aren’t trying, they’re trying, but they’ve got to get together themselves and figure it out.”

“It’s little, simple things that their not doing,” Kirby said. “They’ve got to get some concentration back and do it pretty quick.”

With the loss, Houston drops to 3-2 in division play, and they will look to bounce back this weekend in the Houston Tournament.

And in a tooth-and-nail battle, Houston edged out the Lady Trojans 10-9.

In the top of the first, New Hope struck for a run, and Houston was quick to tie it at one with an Aquana Brownlee solo shot.

Houston added a run in the second with an RBI sacrifice fly by Jerilyn Jenkins that scored Georgia McMullen, but even with two runs in the first two innings, the Houston wasn’t as explosive as normal.

In the third, after holding New Hope scoreless again, Houston found a groove in the inning with four runs by way of a walk to Brownlee with the bases loaded, a two RBI single by Paige Kilogre, and an RBI single by PJ Cooper.

In the top of the fourth, New Hope took 7-6 lead by way of several hits and a few walks, but in the bottom of the inning, Houston retook the lead 9-7 to end the fourth after two walks with the bases loaded and an RBI flyout by Kilgore.

In the fifth, the game was tied again at nine after New Hope a New Hope two-run smash.

In the sixth, Houston scored what would be the game-winning run after Kilgore tacked on her fourth RBI of the game with a single that scored Brownlee.

And after a excellent sliding stop and throw by Jordyn Moore, a diving catch by Brownlee and a catch at the wall with the bases loaded by Jenkins, Houston sealed the much-needed victory.

After the game, Houston head coach Derick Kirby said he was a little “pestered” even with the important district win.

Kirby added the worst thing in his mind is having questions at this point, but he must deal with those quickly.

“I don’t like having question marks right now,” Kirby said. “But it’s on me to figure those out and get things turned around.”

Homecoming Returns to the Square

Harmon to be first appointed Police Chief of Houston

The heat is here