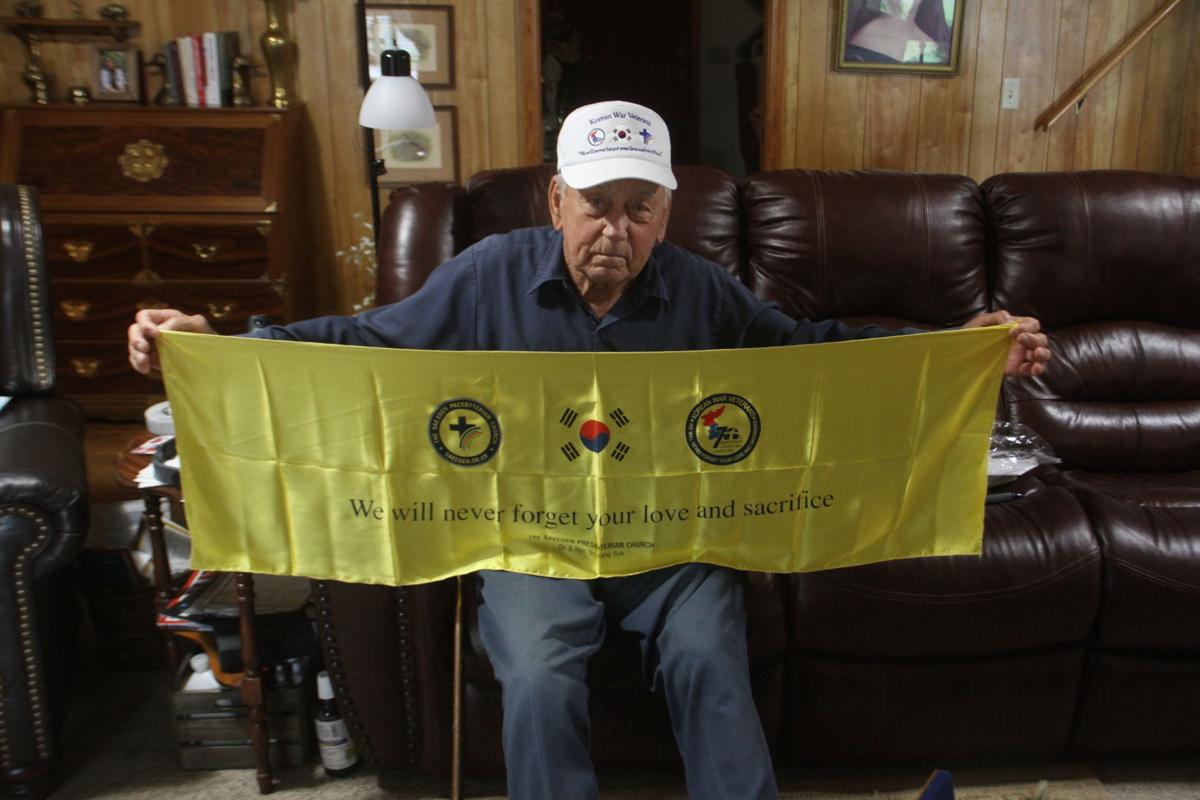 Vernon Fortner received a package from across the globe thanking him for his service in the Korean War. Pictured is Fortner with the hat and banner which was included. 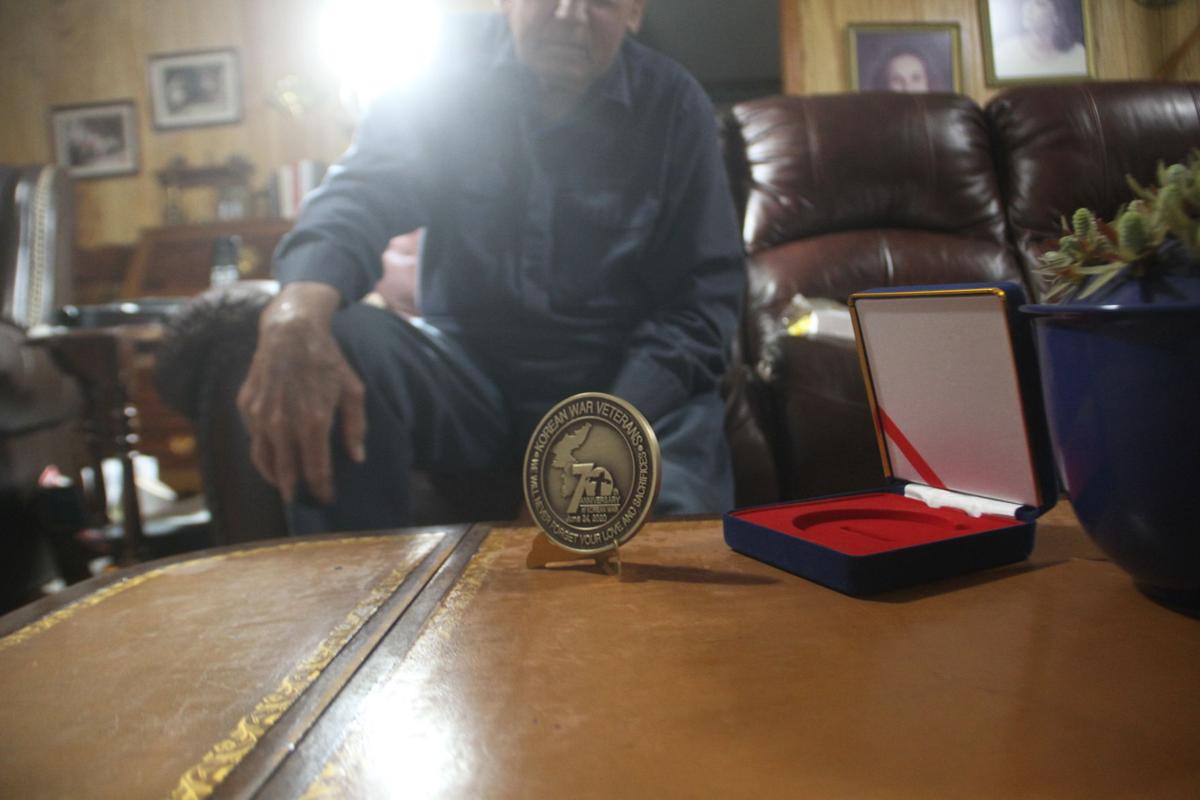 Fortner proudly displays the commemorative coin that he received. 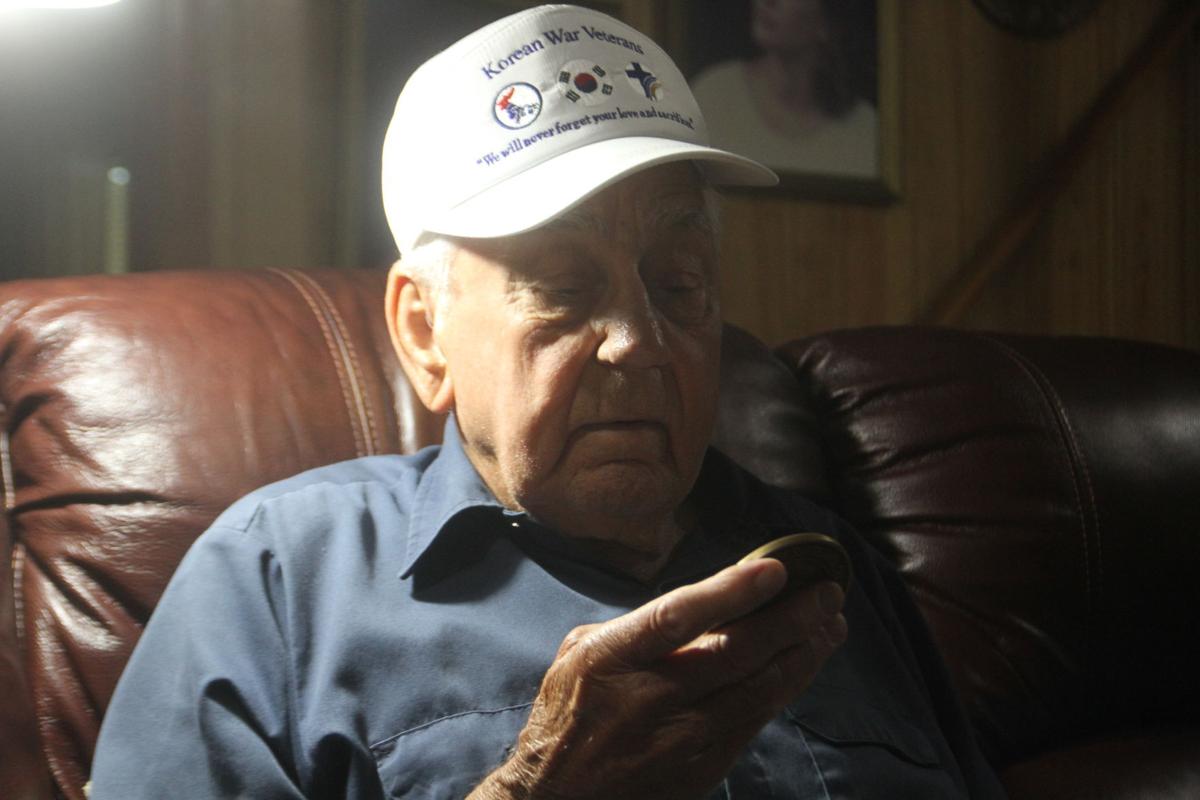 Memories flood back to Fortner as he examines the coin that was gifted to him. 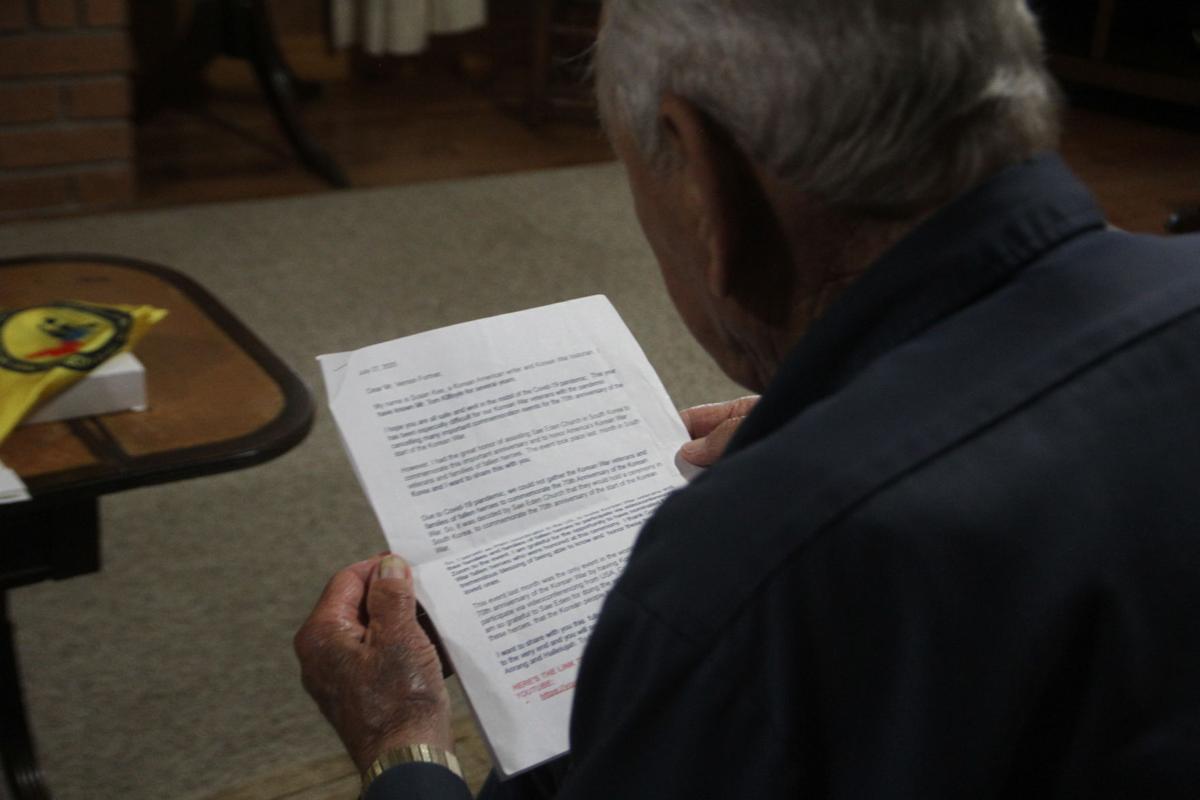 Fortner reads the letter which was included with his package.

Vernon Fortner received a package from across the globe thanking him for his service in the Korean War. Pictured is Fortner with the hat and banner which was included.

Fortner proudly displays the commemorative coin that he received.

Memories flood back to Fortner as he examines the coin that was gifted to him.

Fortner reads the letter which was included with his package.

WOODLAND – When 90 year old Vernon Fortner opened his mailbox, he was not expecting anything out of the ordinary.

Inside, he found a nondescript Postal Service envelope, but thought nothing of it. Little did he know that when he opened it, 70 plus years of memories would come flooding back, as fresh as they were then.

He had received a care package from a church in Korea thanking him for his service to their country during the Korean War.

The package was sent out to surviving Korean War Veterans to commemorate the 70th anniversary of the conflict.

The contents included a cap adorned with the Korean flag as well as the logo of the church, a commemorative coin inscribed with the church's logo on one side, and a decorative monument to the veterans on the other side. In addition, the package contained some literature about the church, and a pamphlet with letters to the veterans from various officials in Korea as well as US President Donald Trump. Lastly, he received a silken banner symbolically tying the whole package together in a bond that could not be broken, not even by the test of time.

“Something like that is appreciated, just to know that people still appreciate the sacrifices, and that there was 30,000 something men that didn't make it home,” said Fortner.

Fortner enlisted in the army, and he was stationed in Japan as part of the 24th Infantry Division where he served as a tank commander. After being in Japan for 29 months, and with two weeks left until he was set to return stateside, Uncle Sam once more called out for assistance in preserving freedom, a call the Fortner was willing to answer.

“I had already agreed to an indefinite enlistment because I was going to stay in the military for 20 years...unfortunately when Korea got through with me I couldn't.”

The men of the 24th Infantry were shipped off to Korea for what was to be a three-week campaign, running the enemy back across the 38th parallel, and then returning home, however, this was not the way it would play out.

Sent in support of the 34th Regiment, Fortner and the men of the 24th Infantry soon found out that the trip was going to be a longer one than they bargained for.

“It didn't work out like they thought,” he added with a chuckle. “When we got there we found out that the North Koreans had 20 divisions coming south, and we just fought, delaying action, more of a hit and run deal.”

He entered into combat south of Enchon on July 4, 1950, America's Independence Day, but he spent it fighting for another country's independence, a service the people of that country have yet to forget.

Fortner's tour in Korea, and his military career as a whole, were cut short by a bullet fired from a machine gun while fighting 60 miles north of Pongyang, North Korea.

Fortner would go on to spend the next 18 months in the Fort Campbell Military Hospital before returning home.

Flash forward to today, and the members of The Sae Eden Presbyterian Church in Saeeden, Korea find it in their hearts to send these packages. There was a letter included in the package.

My name is Susan Kee, a Korean American writer and Korean War historian. I have known Mr. Tom Kilfoyle for several years.

I hope you are safe and well in the midst of the COVID-19 pandemic. This year has been especially difficult for Korean War Veterans with the pandemic canceling many important commemorative events for the 70th anniversary of the start of the Korean War.

However, I have had the great honor of assisting Sae Eden Church in South Korea to commemorate this important anniversary and to honor America's Korean War veterans and families of fallen heroes. The event took place last month in South Korea and I want to share this with you.

It also included a summary of the event that was held. However, her message at the end of the letter resonated.

“I thank you for your service that saved my family and gave me the life and liberties I am able to enjoy today. I hope you take great pride in the legacy and gift of freedom you have given to many generations of Koreans,”

This was a central theme throughout the items received, as many bore the quotation “We will never forget your love and sacrifice.”

Fortner settled here in Chickasaw County after returning home from the war. He opened Fortner's Jewelry in Houston and the rest, as they say, is history.