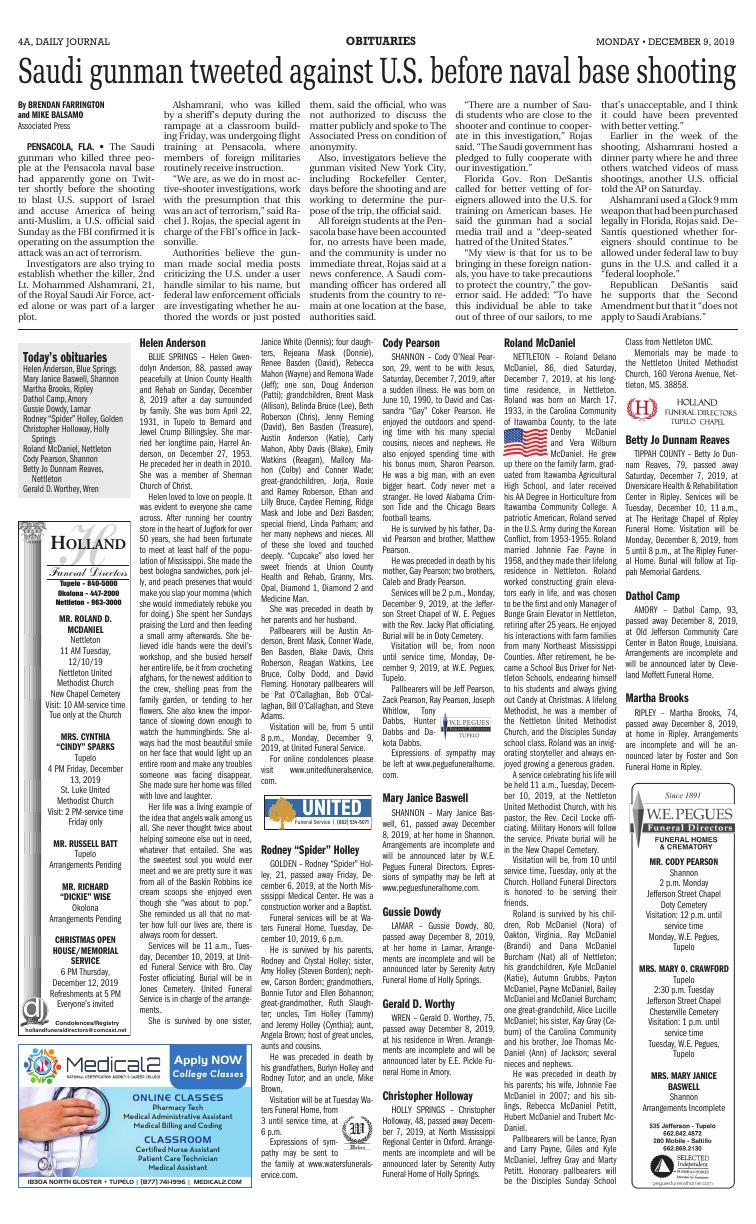 PENSACOLA, Fla. • The Saudi gunman who killed three people at the Pensacola naval base had apparently gone on Twitter shortly before the shooting to blast U.S. support of Israel and accuse America of being anti-Muslim, a U.S. official said Sunday as the FBI confirmed it is operating on the assumption the attack was an act of terrorism.

Investigators are also trying to establish whether the killer, 2nd Lt. Mohammed Alshamrani, 21, of the Royal Saudi Air Force, acted alone or was part of a larger plot.

Alshamrani, who was killed by a sheriff’s deputy during the rampage at a classroom building Friday, was undergoing flight training at Pensacola, where members of foreign militaries routinely receive instruction.

“We are, as we do in most active-shooter investigations, work with the presumption that this was an act of terrorism,” said Rachel J. Rojas, the special agent in charge of the FBI’s office in Jacksonville.

Authorities believe the gunman made social media posts criticizing the U.S. under a user handle similar to his name, but federal law enforcement officials are investigating whether he authored the words or just posted them, said the official, who was not authorized to discuss the matter publicly and spoke to The Associated Press on condition of anonymity.

Also, investigators believe the gunman visited New York City, including Rockefeller Center, days before the shooting and are working to determine the purpose of the trip, the official said.

All foreign students at the Pensacola base have been accounted for, no arrests have been made, and the community is under no immediate threat, Rojas said at a news conference. A Saudi commanding officer has ordered all students from the country to remain at one location at the base, authorities said.

“There are a number of Saudi students who are close to the shooter and continue to cooperate in this investigation,” Rojas said. “The Saudi government has pledged to fully cooperate with our investigation.”

Florida Gov. Ron DeSantis called for better vetting of foreigners allowed into the U.S. for training on American bases. He said the gunman had a social media trail and a “deep-seated hatred of the United States.”

“My view is that for us to be bringing in these foreign nationals, you have to take precautions to protect the country,” the governor said. He added: “To have this individual be able to take out of three of our sailors, to me that’s unacceptable, and I think it could have been prevented with better vetting.”

Earlier in the week of the shooting, Alshamrani hosted a dinner party where he and three others watched videos of mass shootings, another U.S. official told the AP on Saturday.

Alshamrani used a Glock 9 mm weapon that had been purchased legally in Florida, Rojas said. DeSantis questioned whether foreigners should continue to be allowed under federal law to buy guns in the U.S. and called it a “federal loophole.”

Republican DeSantis said he supports that the Second Amendment but that it “does not apply to Saudi Arabians.”

The official who spoke Saturday said one of the three students who attended the dinner party hosted by the attacker recorded video outside the classroom building while the shooting was taking place. Two other Saudi students watched from a car, the official said.

In a statement, the FBI confirmed Sunday that it had obtained base surveillance videos as well as cellphone footage taken by a bystander outside the building, and had also interviewed that person.

Rojas would not directly answer when asked whether other students knew about the attack beforehand or whether there was anything “nefarious” about the making of the video. She said that a lot of information needs to be confirmed by investigators and that she did not want to contribute to “misinformation” circulating about the case.

Rojas said federal authorities are focused on questioning the gunman’s friends, classmates and other associates. “Our main goal is to confirm if he acted alone or was he part of a larger network,” she said.

President Donald Trump’s national security adviser, Robert O’Brien, said on CBS’ “”Face the Nation” that the shooting looked like “terrorism or akin to terrorism.” But he cautioned that the FBI was still investigating.

“Look, to me it appears to be a terrorist attack,” he said. “I don’t want prejudge the investigation, but it appears that this may be someone that was radicalized.” O’Brien said he did not see evidence so far of a “broader plot.”

The U.S. has long had a robust training program for Saudis, providing assistance in the U.S. and in the kingdom. More than 850 Saudis are in the United States for various training activities. They are among more than 5,000 foreign students from 153 countries in the U.S. going through military training.

Foreigners allowed into the U.S. for military training are subject to background checks to weed out security risks.

“This has been done for many decades,” Trump said on Saturday. “I guess we’re going to have to look into the whole procedure. We’ll start that immediately.”

BLUE SPRINGS – Helen Gwendolyn Anderson, 88, passed away peacefully at Union County Health and Rehab on Sunday, December 8, 2019 after a day surrounded by family. She was born April 22, 1931, in Tupelo to Bernard and Jewel Crump Billingsley. She married her longtime pain, Harrel Anderson, on December 27, 1953. He preceded her in death in 2010. She was a member of Sherman Church of Christ.

Helen loved to love on people. It was evident to everyone she came across. After running her country store in the heart of Jugfork for over 50 years, she had been fortunate to meet at least half of the population of Mississippi. She made the best bologna sandwiches, pork jelly, and peach preserves that would make you slap your momma (which she would immediately rebuke you for doing.) She spent her Sundays praising the Lord and then feeding a small army afterwards. She believed idle hands were the devil’s workshop, and she busied herself her entire life, be it from crocheting afghans, for the newest addition to the crew, shelling peas from the family garden, or tending to her flowers. She also knew the importance of slowing down enough to watch the hummingbirds. She always had the most beautiful smile on her face that would light up an entire room and make any troubles someone was facing disappear. She made sure her home was filled with love and laughter.

Her life was a living example of the idea that angels walk among us all. She never thought twice about helping someone else out in need, whatever that entailed. She was the sweetest soul you would ever meet and we are pretty sure it was from all of the Baskin Robbins ice cream scoops she enjoyed even though she “was about to pop.” She reminded us all that no matter how full our lives are, there is always room for dessert.

She was preceded in death by her parents and her husband.

GOLDEN – Rodney “Spider” Holley, 21, passed away Friday, December 6, 2019, at the North Mississippi Medical Center. He was a construction worker and a Baptist.

He was preceded in death by his grandfathers, Burlyn Holley and Rodney Tutor; and an uncle, Mike Brown.

Visitation will be at Tuesday Waters Funeral Home, from 3 until service time, at 6 p.m.

Expressions of sympathy may be sent to the family at www.watersfuneralservice.com.

SHANNON – Cody O’Neal Pearson, 29, went to be with Jesus, Saturday, December 7, 2019, after a sudden illness. He was born on June 10, 1990, to David and Cassandra “Gay” Coker Pearson. He enjoyed the outdoors and spending time with his many special cousins, nieces and nephews. He also enjoyed spending time with his bonus mom, Sharon Pearson. He was a big man, with an even bigger heart. Cody never met a stranger. He loved Alabama Crimson Tide and the Chicago Bears football teams.

He is survived by his father, David Pearson and brother, Matthew Pearson.

He was preceded in death by his mother, Gay Pearson; two brothers, Caleb and Brady Pearson.

Services will be 2 p.m., Monday, December 9, 2019, at the Jefferson Street Chapel of W. E. Pegues with the Rev. Jacky Plat officiating. Burial will be in Doty Cemetery.

Visitation will be, from noon until service time, Monday, December 9, 2019, at W.E. Pegues, Tupelo.

Expressions of sympathy may be left at www.peguefuneralhome.com.

SHANNON – Mary Janice Baswell, 61, passed away December 8, 2019, at her home in Shannon. Arrangements are incomplete and will be announced later by W.E. Pegues Funeral Directors. Expressions of sympathy may be left at www.peguesfuneralhome.com.

LAMAR – Gussie Dowdy, 80, passed away December 8, 2019, at her home in Lamar. Arrangements are incomplete and will be announced later by Serenity Autry Funeral Home of Holly Springs.

WREN – Gerald D. Worthey, 75, passed away December 8, 2019, at his residence in Wren. Arrangements are incomplete and will be announced later by E.E. Pickle Funeral Home in Amory.

HOLLY SPRINGS – Christopher Holloway, 48, passed away December 7, 2019, at North Mississippi Regional Center in Oxford. Arrangements are incomplete and will be announced later by Serenity Autry Funeral Home of Holly Springs.

NETTLETON – Roland Delano McDaniel, 86, died Saturday, December 7, 2019, at his longtime residence, in Nettleton. Roland was born on March 17, 1933, in the Carolina Community of Itawamba County, to the late Denby McDaniel and Vera Wilburn McDaniel. He grew up there on the family farm, graduated from Itawamba Agricultural High School, and later received his AA Degree in Horticulture from Itawamba Community College. A patriotic American, Roland served in the U.S. Army during the Korean Conflict, from 1953-1955. Roland married Johnnie Fae Payne in 1958, and they made their lifelong residence in Nettleton. Roland worked constructing grain elevators early in life, and was chosen to be the first and only Manager of Bunge Grain Elevator in Nettleton, retiring after 25 years. He enjoyed his interactions with farm families from many Northeast Mississippi Counties. After retirement, he became a School Bus Driver for Nettleton Schools, endearing himself to his students and always giving out Candy at Christmas. A lifelong Methodist, he was a member of the Nettleton United Methodist Church, and the Disciples Sunday school class. Roland was an invigorating storyteller and always enjoyed growing a generous graden.

A service celebrating his life will be held 11 a.m., Tuesday, December 10, 2019, at the Nettleton United Methodist Church, with his pastor, the Rev. Cecil Locke officiating. Military Honors will follow the service. Private burial will be in the New Chapel Cemetery.

Visitation will be, from 10 until service time, Tuesday, only at the Church. Holland Funeral Directors is honored to be serving their friends.

He was preceded in death by his parents; his wife, Johnnie Fae McDaniel in 2007; and his siblings, Rebecca McDaniel Petitt, Hubert McDaniel and Trubert McDaniel.

Memorials may be made to the Nettleton United Methodist Church, 160 Verona Avenue, Nettleton, MS. 38858.

RIPLEY – Martha Brooks, 74, passed away December 8, 2019, at home in Ripley. Arrangements are incomplete and will be announced later by Foster and Son Funeral Home in Ripley. 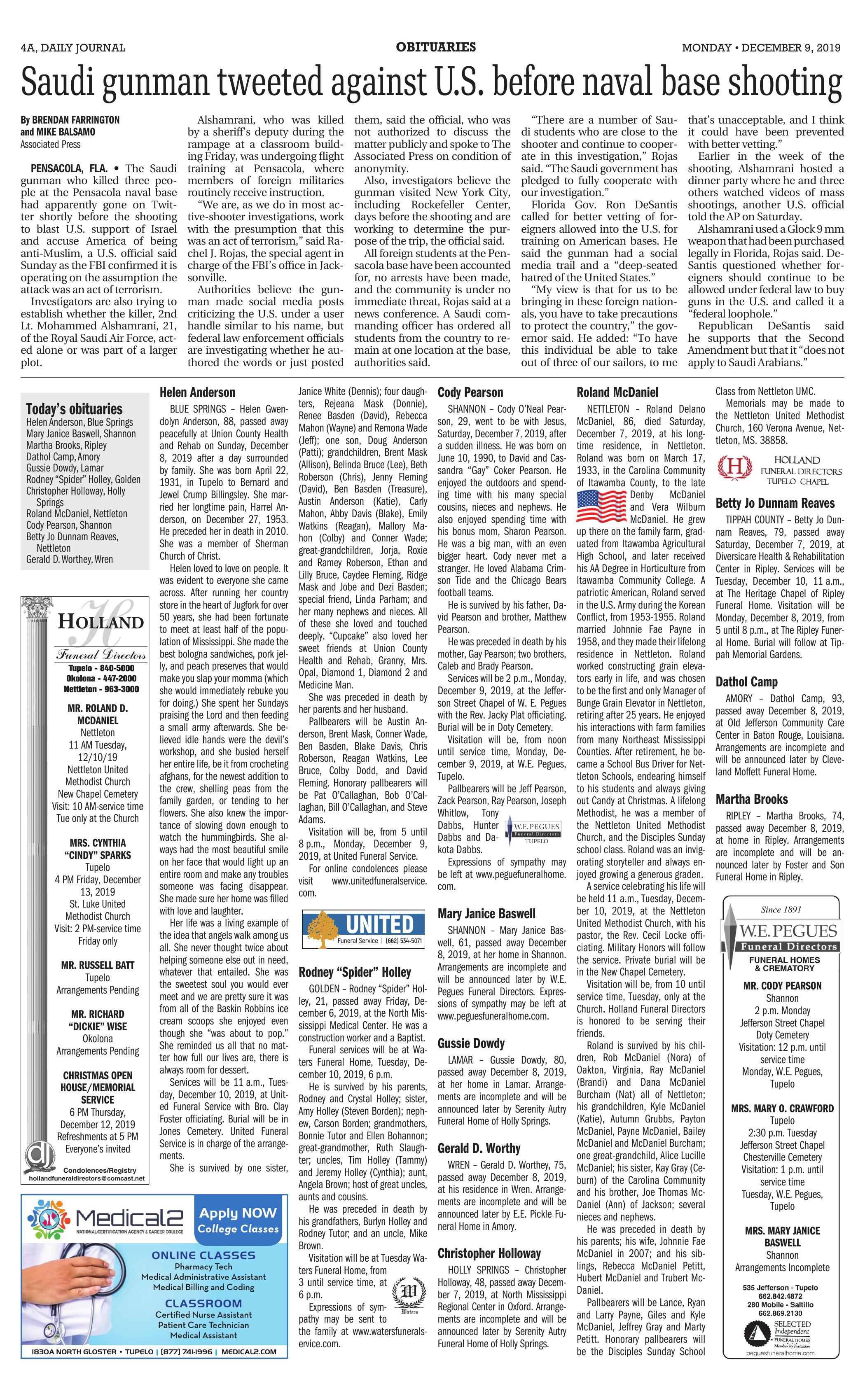