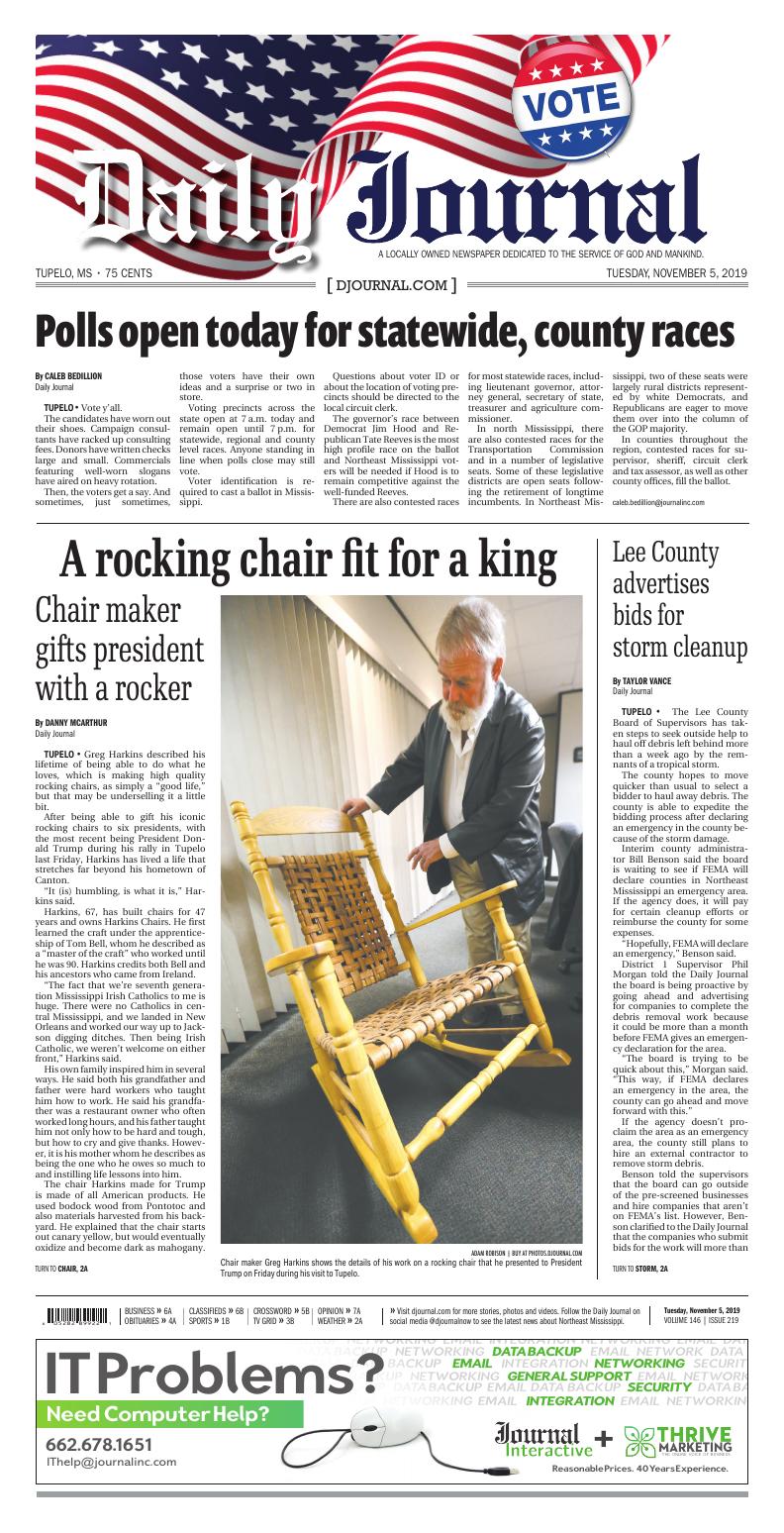 The candidates have worn out their shoes. Campaign consultants have racked up consulting fees. Donors have written checks large and small. Commercials featuring well-worn slogans have aired on heavy rotation.

Then, the voters get a say. And sometimes, just sometimes, those voters have their own ideas and a surprise or two in store.

Voting precincts across the state open at 7 a.m. today and remain open until 7 p.m. for statewide, regional and county level races. Anyone standing in line when polls close may still vote.

Voter identification is required to cast a ballot in Mississippi.

Questions about voter ID or about the location of voting precincts should be directed to the local circuit clerk.

The governor’s race between Democrat Jim Hood and Republican Tate Reeves is the most high profile race on the ballot and Northeast Mississippi voters will be needed if Hood is to remain competitive against the well-funded Reeves.

There are also contested races for most statewide races, including lieutenant governor, attorney general, secretary of state, treasurer and agriculture commissioner.

In north Mississippi, there are also contested races for the Transportation Commission and in a number of legislative seats. Some of these legislative districts are open seats following the retirement of longtime incumbents. In Northeast Mississippi, two of these seats were largely rural districts represented by white Democrats, and Republicans are eager to move them over into the column of the GOP majority.

In counties throughout the region, contested races for supervisor, sheriff, circuit clerk and tax assessor, as well as other county offices, fill the ballot.

Greg Harkins shows the details of his work on a rocking chair he presented to President Trump during his visit to Tupelo.

Chair maker Greg Harkins has made chairs for several past presidents.

TUPELO • Greg Harkins described his lifetime of being able to do what he loves, which is making high quality rocking chairs, as simply a “good life,” but that may be underselling it a little bit.

After being able to gift his iconic rocking chairs to six presidents, with the most recent being President Donald Trump during his rally in Tupelo last Friday, Harkins has lived a life that stretches far beyond his hometown of Canton.

Harkins, 67, has built chairs for 47 years and owns Harkins Chairs. He first learned the craft under the apprenticeship of Tom Bell, whom he described as a “master of the craft” who worked until he was 90. Harkins credits both Bell and his ancestors who came from Ireland.

“The fact that we’re seventh generation Mississippi Irish Catholics to me is huge. There were no Catholics in central Mississippi, and we landed in New Orleans and worked our way up to Jackson digging ditches. Then being Irish Catholic, we weren’t welcome on either front,” Harkins said.

His own family inspired him in several ways. He said both his grandfather and father were hard workers who taught him how to work. He said his grandfather was a restaurant owner who often worked long hours, and his father taught him not only how to be hard and tough, but how to cry and give thanks. However, it is his mother whom he describes as being the one who he owes so much to and instilling life lessons into him.

The chair Harkins made for Trump is made of all American products. He used bodock wood from Pontotoc and also materials harvested from his backyard. He explained that the chair starts out canary yellow, but would eventually oxidize and become dark as mahogany. This is the third time he has tried to arrange giving a chair to Trump, and he said on the last visit, he was told by Gov. Phil Bryant that while it was too short notice to give it to him at that time, they would arrange it for the next trip Trump made to Mississippi.

Both Sen. Roger Wicker and Bryant escorted Harkins to meet Trump, who did not get to see the chair but did sign a photo of the chair for Harkins. Harkins said the chair will be transported to the White House at a later date, escorted by either himself or Wicker.

“I had a few minutes to talk to (Trump), and that went real well. I told him about the classes and teaching,” Harkins said. “I showed him my Donald Trump socks and asked him if he had some Greg Harkins socks, and he laughed.”

Harkins keeps an album full of memories of the presidents who received his chairs: Jimmy Carter, Ronald Reagan, George H.W. Bush, Bill Clinton and George Bush Jr. Harkins has also been able to make chairs for famous Mississippi natives such as Oprah Winfrey and Morgan Freeman.

Harkins also has a plethora of memories to go along with those photos. For example, Harkins said it was his banker who gifted his first presidential chair to Carter, and he did not find out about it until later. He remembers that Clinton sent him letters after he received his chair, and considers Reagan and 44th Vice President Dan Quayle as two of his favorite recipients of his chairs.

Harkins said life has been good for him, but he wants to focus on giving back as much as he can and creating a legacy by finding an apprentice. His current focus is preserving St. Anne Church, which is where several generations of his family have attended; and working on Greg Harkins’ School of Arts and Crafts, which features chair-making classes, cooking, and other art classes. Harkins also wants to start a mission to raise money for artists and musicians in need.

“What I have done with my life is exactly what Donald Trump is talking about. In this country, if you’re big enough, you can do whatever you want to do,” Harkins said. “You have to have faith in yourself, and it’s not a matter of someone taking care of you. It’s a matter of you taking care of everything that comes along.”

Powerful winds spawned by Tropical Storm Olga snapped off a huge oak tree which fell on this North Main Street home and vehicle owned by Tim Jones in Pontotoc Oct. 26. No one was injured. The storm caused widespread power outage and damaged numerous homes, sheds and barns throughout Pontotoc County.

TUPELO • The Lee County Board of Supervisors has taken steps to seek outside help to haul off debris left behind more than a week ago by the remnants of a tropical storm.

The county hopes to move quicker than usual to select a bidder to haul away debris. The county is able to expedite the bidding process after declaring an emergency in the county because of the storm damage.

Interim county administrator Bill Benson said the board is waiting to see if FEMA will declare counties in Northeast Mississippi an emergency area. If the agency does, it will pay for certain cleanup efforts or reimburse the county for some expenses.

District 1 Supervisor Phil Morgan told the Daily Journal the board is being proactive by going ahead and advertising for companies to complete the debris removal work because it could be more than a month before FEMA gives an emergency declaration for the area.

“The board is trying to be quick about this,” Morgan said. “This way, if FEMA declares an emergency in the area, the county can go ahead and move forward with this.”

If the agency doesn’t proclaim the area as an emergency area, the county still plans to hire an external contractor to remove storm debris.

Benson told the supervisors that the board can go outside of the pre-screened businesses and hire companies that aren’t on FEMA’s list. However, Benson clarified to the Daily Journal that the companies who submit bids for the work will more than likely already be approved and licensed to do work for FEMA.

Lee Bowdry, the county’s emergency management director, told the Daily Journal the county has conducted its initial assessment of the storm damage and sent its preliminary numbers to state and federal agencies.

“Now, we’re just waiting for the state to get numbers from other counties,” Bowdry said.

Morgan urged residents of the county to remain patient and to cooperate with the county with the debris removal process.

The board will vote to take any further action at its next regular meeting on Monday, Nov. 18. 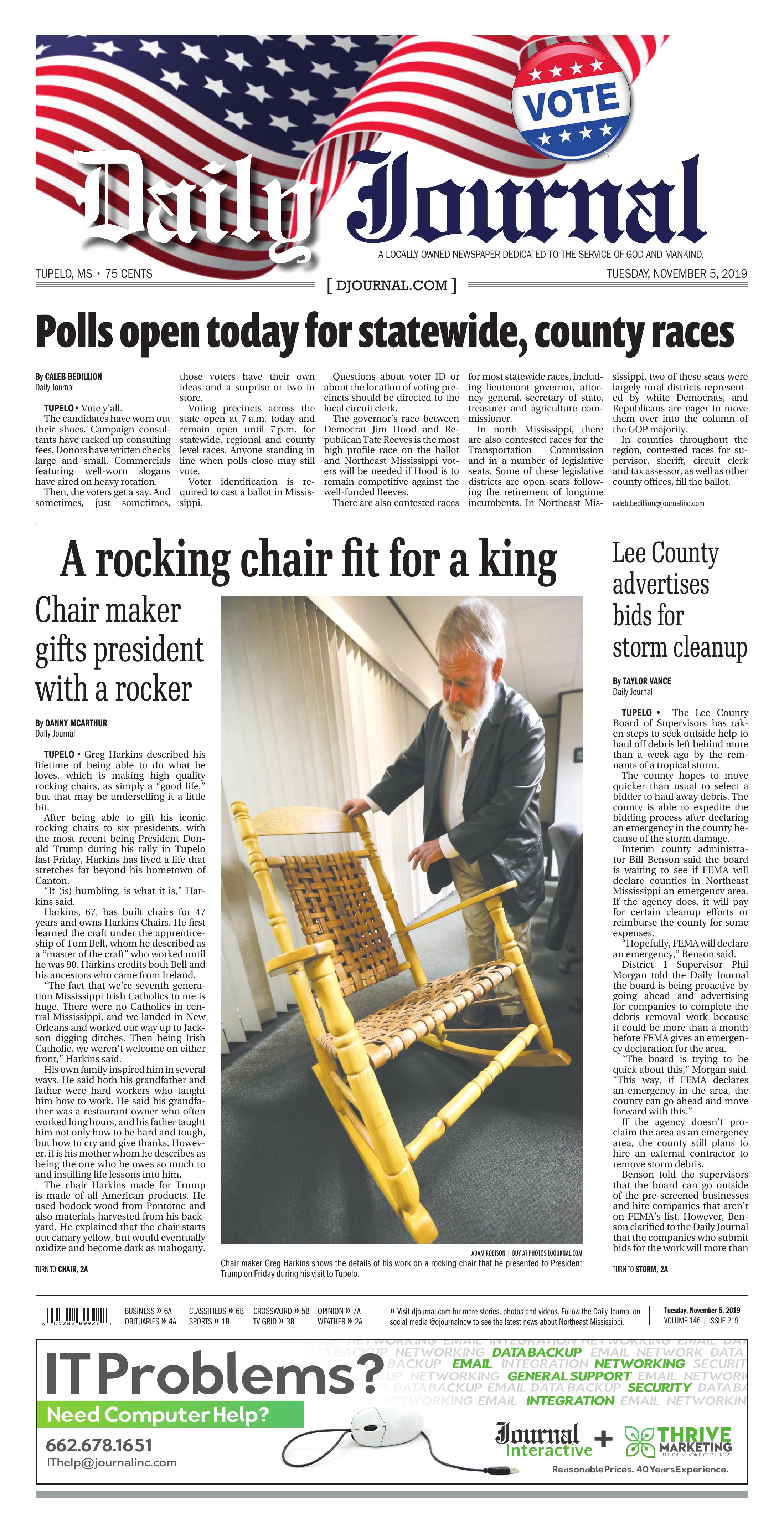