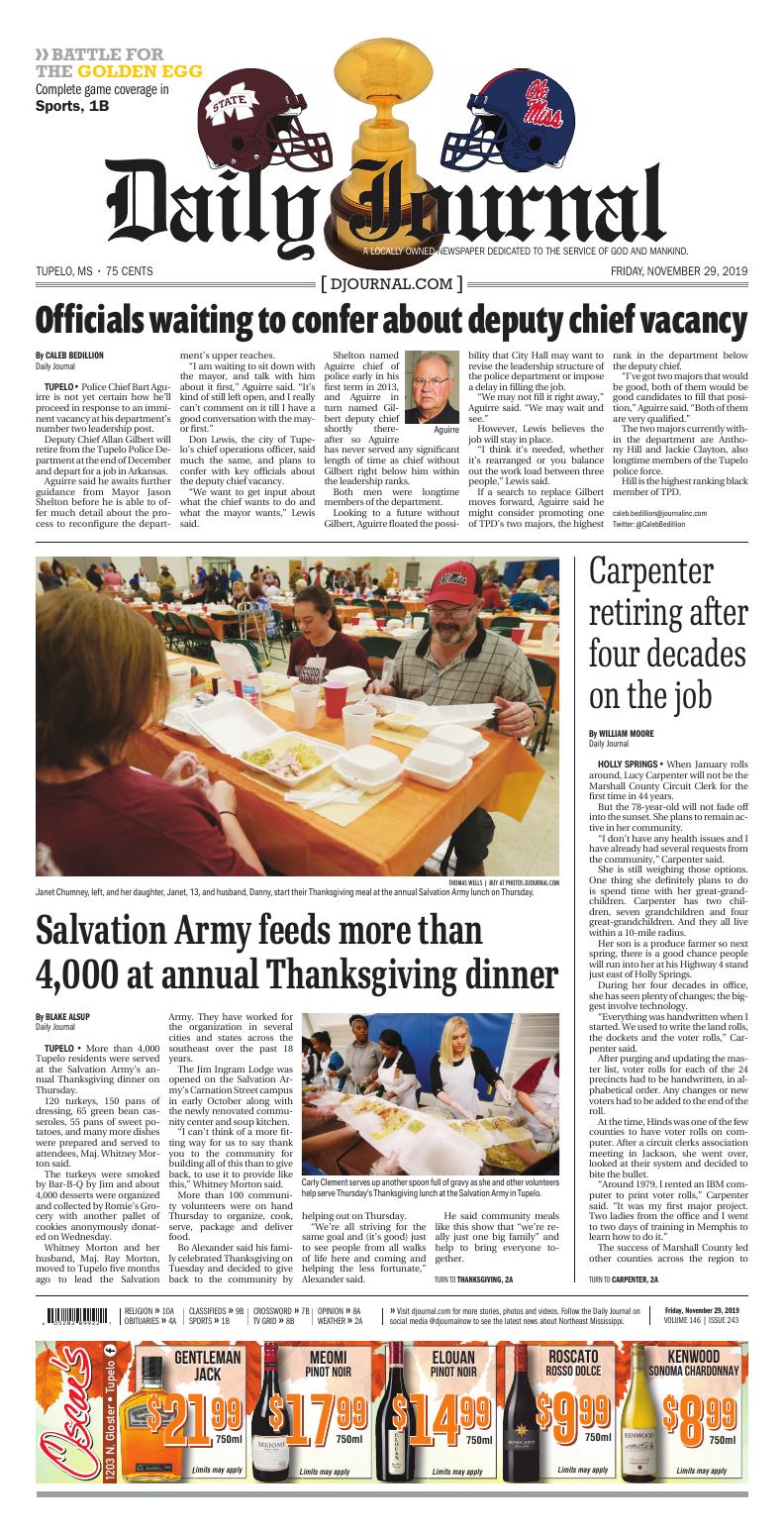 TUPELO • Police Chief Bart Aguirre is not yet certain how he’ll proceed in response to an imminent vacancy at his department’s number two leadership post.

Deputy Chief Allan Gilbert will retire from the Tupelo Police Department at the end of December and depart for a job in Arkansas.

Aguirre said he awaits further guidance from Mayor Jason Shelton before he is able to offer much detail about the process to reconfigure the department’s upper reaches.

“I am waiting to sit down with the mayor, and talk with him about it first,” Aguirre said. “It’s kind of still left open, and I really can’t comment on it till I have a good conversation with the mayor first.”

Don Lewis, the city of Tupelo’s chief operations officer, said much the same, and plans to confer with key officials about the deputy chief vacancy.

“We want to get input about what the chief wants to do and what the mayor wants,” Lewis said.

Shelton named Aguirre chief of police early in his first term in 2013, and Aguirre in turn named Gilbert deputy chief shortly thereafter so Aguirre has never served any significant length of time as chief without Gilbert right below him within the leadership ranks.

Both men were longtime members of the department.

Looking to a future without Gilbert, Aguirre floated the possibility that City Hall may want to revise the leadership structure of the police department or impose a delay in filling the job.

“We may not fill it right away,” Aguirre said. “We may wait and see.”

However, Lewis believes the job will stay in place.

“I think it’s needed, whether it’s rearranged or you balance out the work load between three people,” Lewis said.

If a search to replace Gilbert moves forward, Aguirre said he might consider promoting one of TPD’s two majors, the highest rank in the department below the deputy chief.

The two majors currently within the department are Anthony Hill and Jackie Clayton, also longtime members of the Tupelo police force.

Hill is the highest ranking black member of TPD.

Carly Clement serves up another spoon full of gravy as she and other volunteers help serve Thursday’s Thanksgiving lunch at the Salvation Army in Tupelo.

Janet Chumney, left, and her daughter, Janet, 13, and husband, Danny, start their Thanksgiving meal at the annual Salvation Army lunch on Thursday.

Dr. Roma Taylor, left, and her sister, Elizabeth, both of Tupelo have it made a tradition to have their Thanksgving lunch at The Salvation Army.

Volunteers at the Salvation Amry get boxes of Thanksgiving lunches ready for delivery Thursday afternoon.

TUPELO • More than 4,000 Tupelo residents were served at the Salvation Army’s annual Thanksgiving dinner on Thursday.

The turkeys were smoked by Bar-B-Q by Jim and about 4,000 desserts were organized and collected by Romie’s Grocery with another pallet of cookies anonymously donated on Wednesday.

Whitney Morton and her husband, Maj. Ray Morton, moved to Tupelo five months ago to lead the Salvation Army. They have worked for the organization in several cities and states across the southeast over the past 18 years.

The Jim Ingram Lodge was opened on the Salvation Army’s Carnation Street campus in early October along with the newly renovated community center and soup kitchen.

“I can’t think of a more fitting way for us to say thank you to the community for building all of this than to give back, to use it to provide like this,” Whitney Morton said.

More than 100 community volunteers were on hand Thursday to organize, cook, serve, package and deliver food.

Bo Alexander said his family celebrated Thanksgiving on Tuesday and decided to give back to the community by helping out on Thursday.

“We’re all striving for the same goal and (it’s good) just to see people from all walks of life here and coming and helping the less fortunate,” Alexander said.

He said community meals like this show that “we’re really just one big family” and help to bring everyone together.

“A lot of people don’t realize that the people in need are just right there around you,” Neal Hobson, a volunteer from Pontotoc, said. “You never know it because they don’t ever show it, so giving back and doing this is a really big deal.”

Nicole Miller attended the community meal with her husband, daughter and two grandchildren.

Her family came to Tupelo from Winston County, Ala., two weeks ago. She said they’re currently staying in a local motel, just “trying to start over.”

“It’s touching, it really is,” Miller said. “To be able to come here means a lot.”

The annual meal started around 50 years ago when Jennie Lynn Johnson began cooking Thanksgiving meals in her home for the children taught at the Salvation Army. From there it grew over the years and now it not only feeds thousands, but offers a community setting on a holiday that can be lonely for many.

“What you’ll see is the wealthiest people in Tupelo sitting down with the poorest people and they’re having a conversation on equal footing,” Whitney Morton said. “There’s no difference.”

“Everybody’s just a neighbor,” she added. “It’s just like it should be.”

Johnson believes many of the people at Thursday’s dinner wouldn’t have a meal if it wasn’t for the Salvation Army.

“The state of Mississippi is the hungriest state in the union,” Whitney Morton said.

HOLLY SPRINGS • When January rolls around, Lucy Carpenter will not be the Marshall County Circuit Clerk for the first time in 44 years.

But the 78-year-old will not fade off into the sunset. She plans to remain active in her community.

“I don’t have any health issues and I have already had several requests from the community,” Carpenter said.

Her son is a produce farmer so next spring, there is a good chance people will run into her at his Highway 4 stand just east of Holly Springs.

During her four decades in office, she has seen plenty of changes; the biggest involve technology.

“Everything was handwritten when I started. We used to write the land rolls, the dockets and the voter rolls,” Carpenter said.

After purging and updating the master list, voter rolls for each of the 24 precincts had to be handwritten, in alphabetical order. Any changes or new voters had to be added to the end of the roll.

At the time, Hinds was one of the few counties to have voter rolls on computer. After a circuit clerks association meeting in Jackson, she went over, looked at their system and decided to bite the bullet.

“Around 1979, I rented an IBM computer to print voter rolls,” Carpenter said. “It was my first major project. Two ladies from the office and I went to two days of training in Memphis to learn how to do it.”

The success of Marshall County led other counties across the region to begin digitizing their voter rolls as well. And that was just the start. As part of the circuit clerks association, Carpenter played a role in bringing electronic documents to the court system and the statewide push for touchscreen electronic voting machines.

One of her last projects is to digitize the old marriage record indices, dating back to 1836. She used excess fees collected to fund not only that project but the restoration of the older books as well.

“They went back and typed all of the indices so that by the end of the year, they will be searchable on computer,” Carpenter said.

As clerk, Carpenter also oversaw the circuit court, and a couple of felony criminal trials stood out in her memory.

“There was a sexual battery case and after I read the (guilty) verdict, the suspect picked up a wooden chair and smashed it on the floor,” Carpenter said. “After that, I started reading the verdict on the other side of the bench.”

There were also a couple of cases where defendants ran from the court. One ran out the back door and jumped out the second floor window. He was quickly captured.

“Another one jumped the rail in the courtroom, ran down the center aisle and out the doors,” Carpenter said. “He slid down the banisters and escaped. It took two days to find him.”

Though she had not worked in the clerk’s office before being elected in 1975, she did have county experience. She worked for the sheriff/tax collector when those offices were still combined. She then worked for the tax assessor/collector.

Since that first election, Carpenter was re-elected 10 times and eight of those races were contested.

When she turned 58, Carpenter had enough years in the state system to retire but she just wasn’t ready.

“I still felt like working,” Carpenter said. “I liked the job and thought why change and have to learn a new job?” 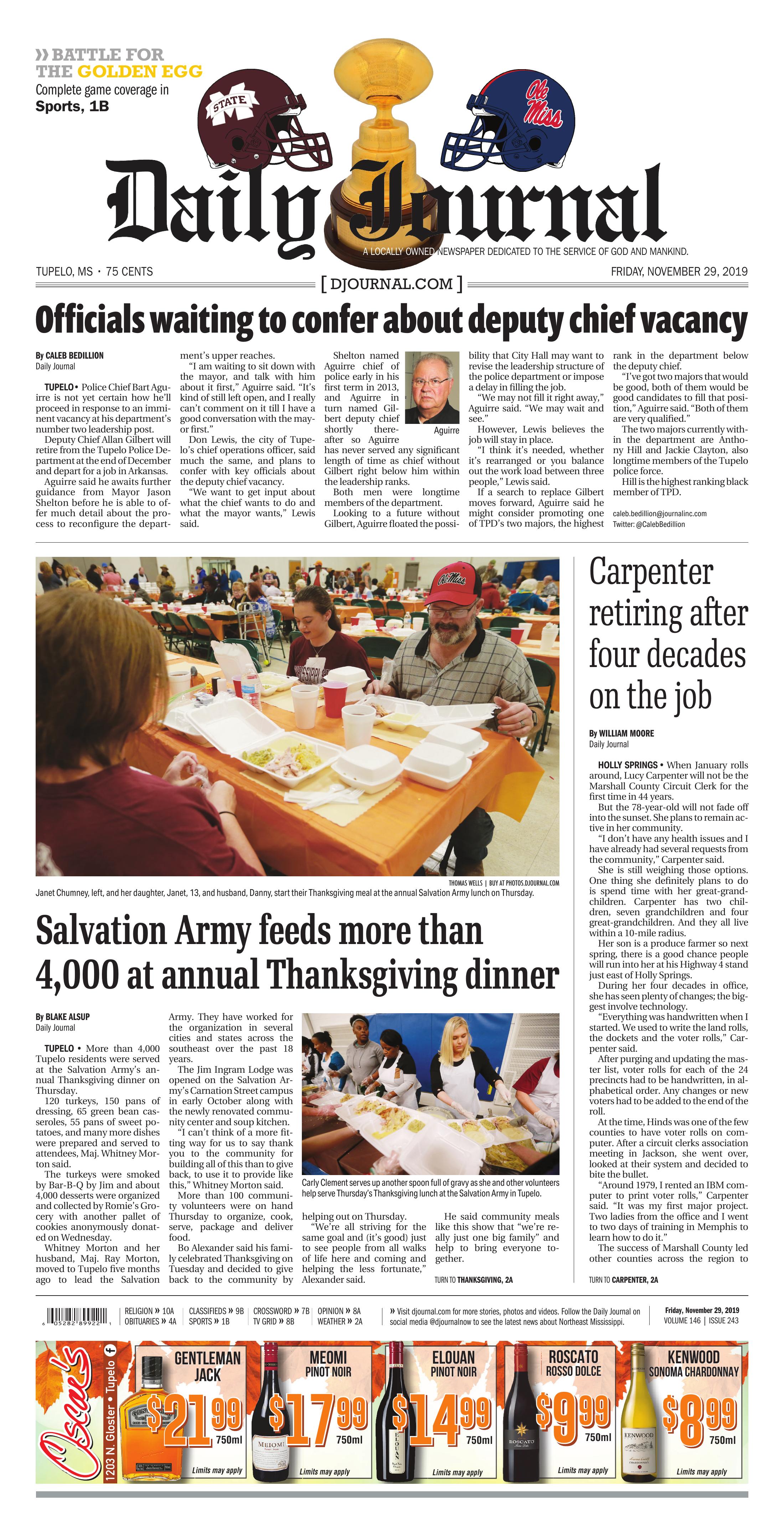