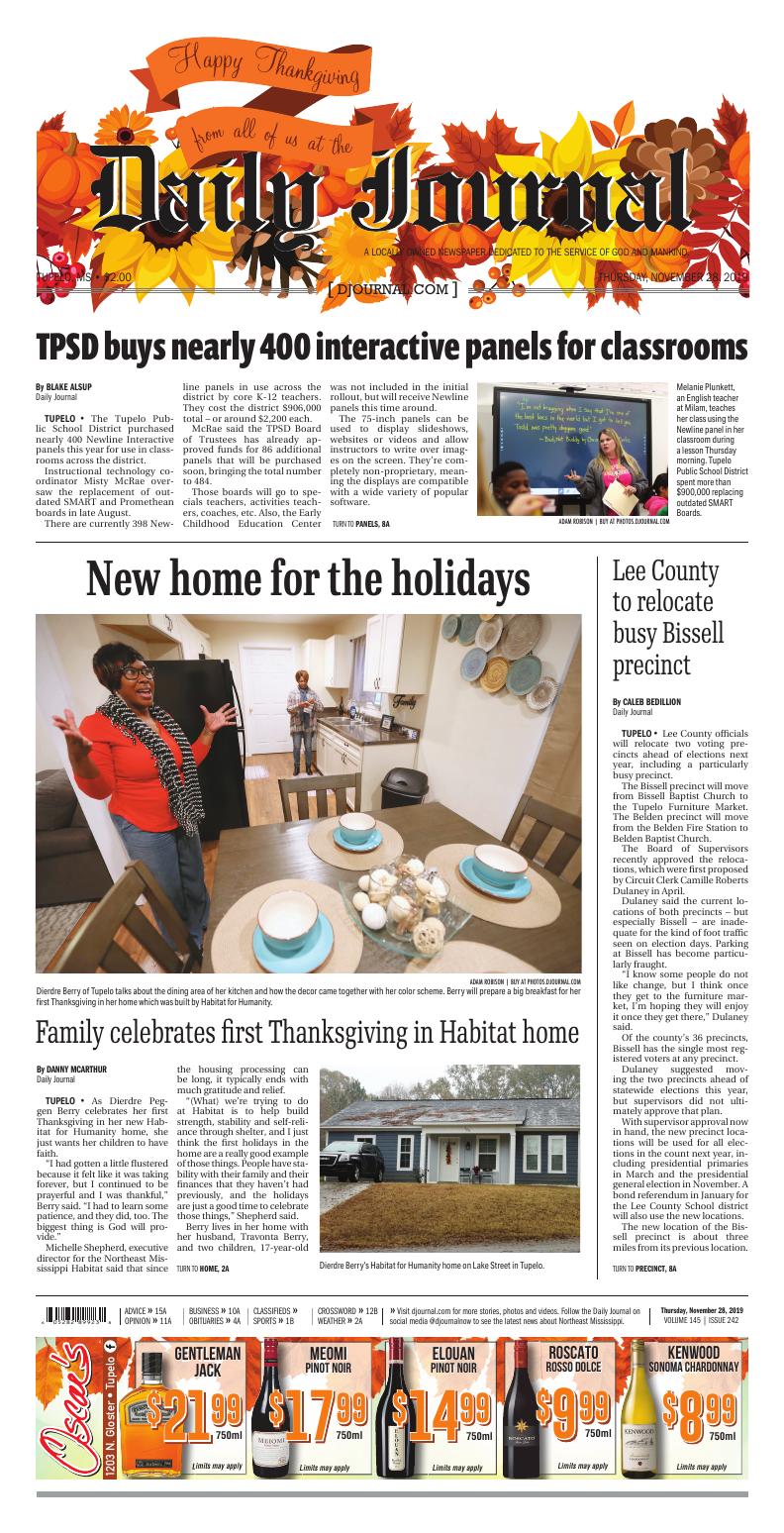 Melanie Plunkett writes a phrase on the Newline panel in her classroom as she gets her class started on a lesson Thursday morning.

Melanie Plunkett, an english teacher at Milam, writes a phrase on the Newline panel in her classroom as she gets her class started on a lesson Thursday morning. Tupelo Public School District spent more than $900,000 dollars replacing outdated SMART Boards with the new panels in hundreds of classrooms this year.

TUPELO • The Tupelo Public School District purchased nearly 400 Newline Interactive panels this year for use in classrooms across the district.

McRae said the TPSD Board of Trustees has already approved funds for 86 additional panels that will be purchased soon, bringing the total number to 484.

Those boards will go to specials teachers, activities teachers, coaches, etc. Also, the Early Childhood Education Center was not included in the initial rollout, but will receive Newline panels this time around.

The 75-inch panels can be used to display slideshows, websites or videos and allow instructors to write over images on the screen. They’re completely non-proprietary, meaning the displays are compatible with a wide variety of popular software.

They have new software updates installed automatically “over the air” to keep them constantly up-to-date and are expected to last eight to 10 years.

McRae said the panels have “20 points of touch,” allowing multiple students to use or write on the boards at once.

Daytra Riley, kindergarten teacher and 2019 Teacher of the Year at Carver Elementary School, has used a Newline panel in her class for about two months. She said the new panel is more interactive than the Promethean board that was previously in her classroom.

Her class recently learned about American painter Wayne Thiebaud and viewed a few of his art prints on the panel.

“We actually, with the art print, went through math word problems,” Riley said. “He does a lot of art with foods and counting, things that you can count. So we made math problems from looking at his art prints on the board and were able to go up and write on the pictures and solve them.”

Dennis Word, a sixth-grade math teacher at Milam Elementary School, has had one of the new panels in his classroom for about three months. He called it “the ultimate time saver” and said he “can’t thank the district enough.”

With the Newline panel, he has the ability to easily save notes that he wrote down for his first class of the day and pull them up again for use in other classes.

Students can also go up to the panel and have it replay his explanations of lessons before approaching Word with questions, giving him more one-on-one time with students who need it most.

He compared issues that teachers face to road construction and said sometimes those issues receive temporary fixes, like filling a pothole.

“Some things we’ve done has been pothole fixing,” Word said. “This was paving the street, (the district) paved the street with this one.”

Dierdre Berry of Tupelo talks about the dining area of her kitchen and how the decor came together with her color scheme. Berry will prepare a big breakfast for her first Thanksgiving in her home which was built by Habitat for Humanity.

Dierdre Berry, of Tupelo, and her mother Denise Peggen, looks at one of Berry’s favorite spots in the house, a Bible verse from Jeremiah 1:5, in her sons room above where he keeps his karate belts.

Dierdre Berry, right, of Tupelo, and her mother Denise Peggen, put clean dishes away in Berry’s kitchen. This Thanksgiving will the first in her new Habitat for Humanity Home with her family.

TUPELO • As Dierdre Peggen Berry celebrates her first Thanksgiving in her new Habitat for Humanity home, she just wants her children to have faith.

“I had gotten a little flustered because it felt like it was taking forever, but I continued to be prayerful and I was thankful,” Berry said. “I had to learn some patience, and they did, too. The biggest thing is God will provide.”

Michelle Shepherd, executive director for the Northeast Mississippi Habitat said that since the housing processing can be long, it typically ends with much gratitude and relief.

“(What) we’re trying to do at Habitat is to help build strength, stability and self-reliance through shelter, and I just think the first holidays in the home are a really good example of those things. People have stability with their family and their finances that they haven’t had previously, and the holidays are just a good time to celebrate those things,” Shepherd said.

Berry lives in her home with her husband, Travonta Berry, and two children, 17-year-old SaNiyah Shumpert and 12-year-old Keylen Peggen. The family has already made one holiday memory in their new home. On Halloween, the family enjoyed a movie night, complete with s’mores, popcorn, snacks, an air mattress and a projector.

Berry first applied for a Habitat for Humanity Home in 2014. At the time, she was living in the mobile home where she grew up. Her parents left it for her and her daughter, but it was more than 30 years old by the time Berry sought a Habitat home.

Berry’s aunt, Grace Rogers, encouraged the Habitat application. Berry, who works at the Family Resource Center as a positive youth development coordinator, initially thought “people like me don’t get approved” and burst into tears when she received the acceptance.

More than 100 people apply each year and anywhere between five and 15 are accepted a year. Shepherd said there are three criteria when application screening begins in January: the need for new housing, willingness to partner and ability-to-pay according to income guidelines.

“Typically, people can’t qualify for traditional financing, so we want to make sure that when we sell them this home, that it’s not a burden,” Shepherd said.

Habitat for Humanity requires potential homeowners to perform a certain amount of volunteer work helping to build other homes. They must also take financial education and home maintenance classes.

Once applicants reach their required hours, they are put on a waitlist. Shepherd said Habitat builds about five homes a year, and on average it takes 18 months to two years for applicants to move from list to home. The process can take longer for partners who want specific areas.

Construction began on Berry’s home the first weekend in January. Her family was excited about getting the home, especially her daughter, who was living in Texas with her aunt at the time.

“The day that we actually started building, she was home for Christmas break, so she got to be a part of that process, so that was really special,” Shepherd said.

While her son was too young at the time to volunteer, Berry said her mother, Denise Peggen, was another big helper who worked alongside her for a lot of her volunteer and home building work. Berry also thanked her friends, family and church for offering prayers and support.

Berry was able to close on the house and move in this June. She said she adores her new home and the experience has been exciting. She will celebrate Thanksgiving at her mother’s house, but plans a Thanksgiving breakfast in her home and will invite family and friends later that day to set up a projector and watch movies.

Shepherd said she is thankful to homeowners for giving Habitat for Humanity the privilege of getting to know them. She also thanked the volunteers and community sponsors and hopes people are reminded what a burden affordable housing can be during the holidays.

Since her move from a two bedroom apartment, Berry said everyone in her family enjoys having their own room for the first time.

She hopes the holidays offer the family plenty of time to spend together. For Christmas, she looks forward to decorating the outside of her home for the first time and wants to carry on her tradition of making candies and setting up a tree.

“I definitely want to thank Habitat because this program has really been a blessing to me and my family,” Berry said.

TUPELO • Lee County officials will relocate two voting precincts ahead of elections next year, including a particularly busy precinct.

The Board of Supervisors recently approved the relocations, which were first proposed by Circuit Clerk Camille Roberts Dulaney in April.

Dulaney said the current locations of both precincts – but especially Bissell – are inadequate for the kind of foot traffic seen on election days. Parking at Bissell has become particularly fraught.

“I know some people do not like change, but I think once they get to the furniture market, I’m hoping they will enjoy it once they get there,” Dulaney said.

Of the county’s 36 precincts, Bissell has the single most registered voters at any precinct.

Dulaney suggested moving the two precincts ahead of statewide elections this year, but supervisors did not ultimately approve that plan.

With supervisor approval now in hand, the new precinct locations will be used for all elections in the count next year, including presidential primaries in March and the presidential general election in November. A bond referendum in January for the Lee County School district will also use the new locations.

The new location of the Bissell precinct is about three miles from its previous location. The new Belden precinct is only about a third of a mile from the old location.

In 2018, supervisors agreed to relocate the Oak Hill and Tupelo 4 precincts and also merged the Davis and East Heights precincts. In 2016, officials moved a voting precinct in Nettleton.

In Mississippi, precinct closures and relocations can now proceed more quickly and with less fanfare than was once the case.

Any change of voting locations required approval by the Department of Justice for many years under the terms of the 1965 Voting Rights. Congress periodically renewed this preclearance requirement until the U.S. Supreme Court invalidated it in the 2013 case Shelby County V. Holder. 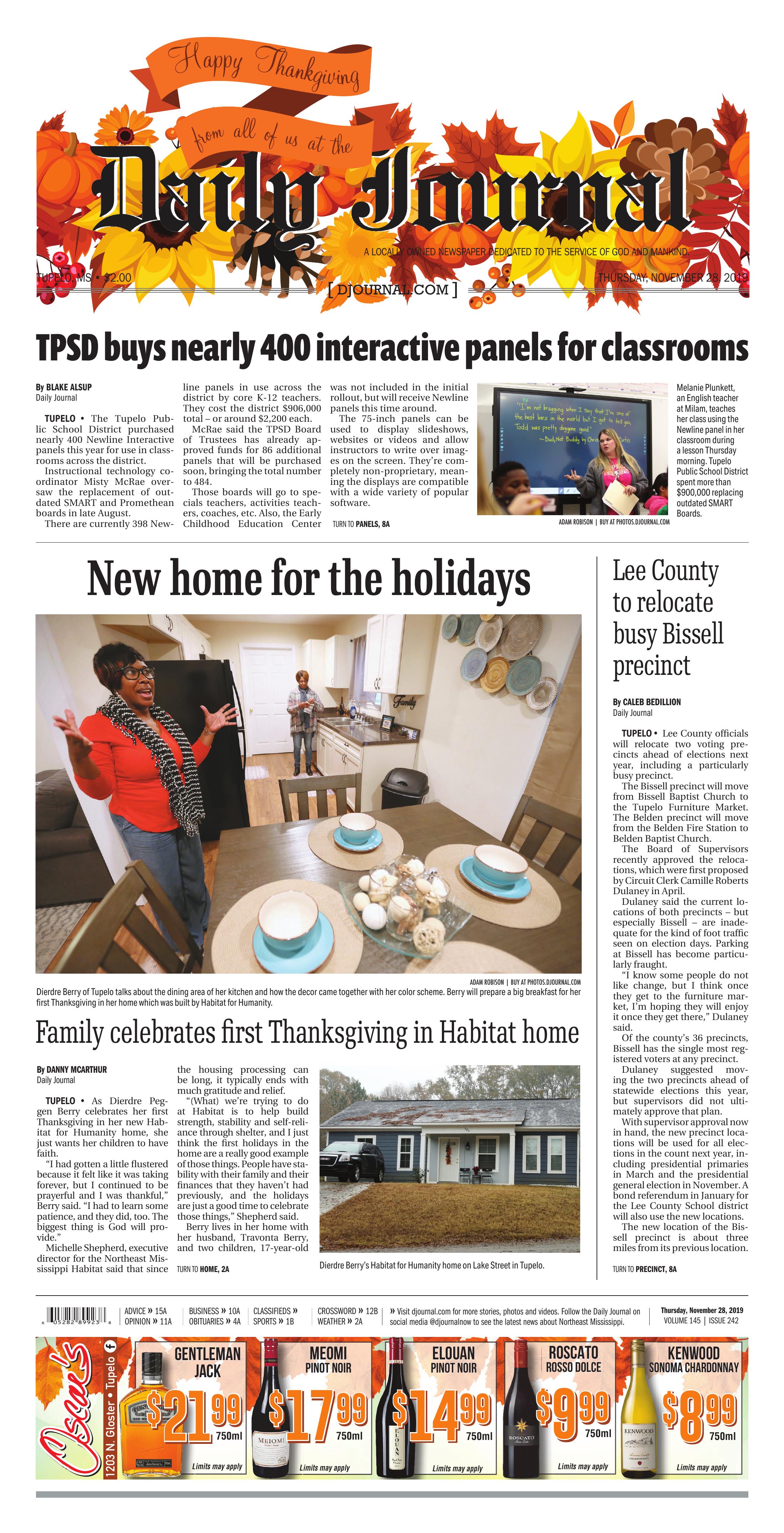