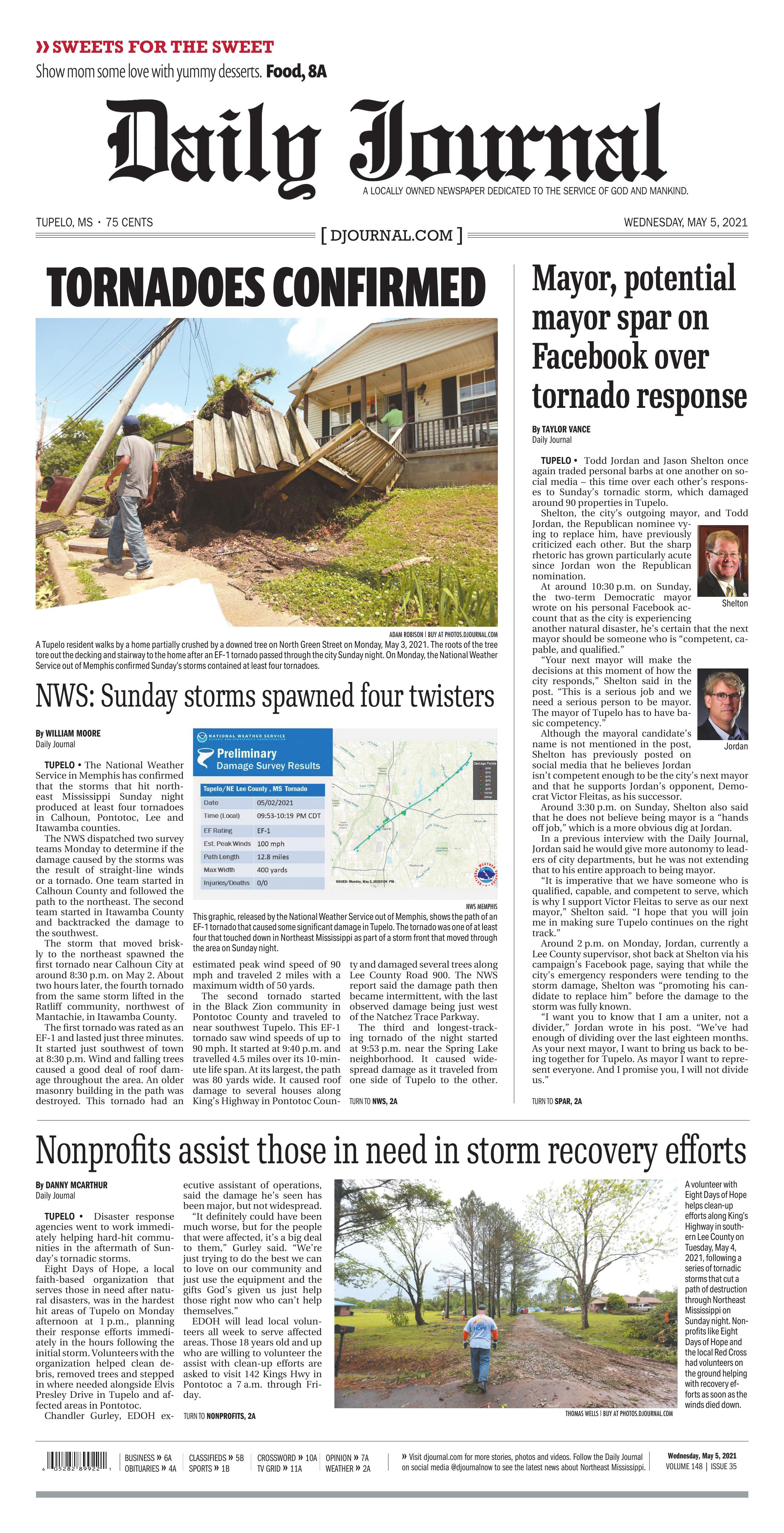 This graphic released by the National Weather Service out of Memphis shows the path of an EF-1 tornado that caused significant damage in the Calhoun City area. The tornado was one of at least four that touched down in Northeast Mississippi as part of a storm front that moved through the area on Sunday night.

A Tupelo resident walks by a home partially crushed by a downed tree on North Green Street on Monday, May 3, 2021. The roots of the tree tore out the decking and stairway to the home after an EF-1 tornado passed through the city Sunday night. On Monday, the National Weather Service out of Memphis confirmed Sunday's storms contained at least four tornadoes.

TUPELO • The National Weather Service in Memphis has confirmed that the storms that hit northeast Mississippi Sunday night produced at least four tornadoes in Calhoun, Pontotoc, Lee and Itawamba counties.

The NWS dispatched two survey teams Monday to determine if the damage caused by the storms was the result of straight-line winds or a tornado. One team started in Calhoun County and followed the path to the northeast. The second team started in Itawamba County and backtracked the damage to the southwest.

The storm that moved briskly to the northeast spawned the first tornado near Calhoun City at around 8:30 p.m. on May 2. About two hours later, the fourth tornado from the same storm lifted in the Ratliff community, northwest of Mantachie, in Itawamba County.

The first tornado was rated as an EF-1 and lasted just three minutes. It started just southwest of town at 8:30 p.m. Wind and falling trees caused a  good deal of roof damage throughout the area. An older masonry building in the path was destroyed. This tornado had an estimated peak wind speed of 90 mph and traveled 2 miles with a maximum width of 50 yards.

The second tornado started in the Black Zion community in Pontotoc County and traveled to near southwest Tupelo. This EF-1 tornado saw wind speeds of up to 90 mph. It started at 9:40 p.m. and travelled 4.5 miles over its 10-minute life span. At its largest, the path was 80 yards wide. It caused roof damage to several houses along King's Highway in Pontotoc County and damaged several trees along Lee County Road 900. The NWS report said the damage path then became intermittent, with the last observed damage being just west of the Natchez Trace Parkway.

The third and longest-tracking tornado of the night started at 9:53 p.m. near the Spring Lake neighborhood. It caused widespread damage as it traveled from one side of Tupelo to the other. Winds reached 100 mph (EF-1), and the tornado reached a width of 400 yards (nearly a quarter-mile) at one point along the 12.8-mile path.

The first signs of damage were near South Thomas Street. It caused minor damage to trees and roofs in the Thomas Street and Lawndale Drive areas. The damage was more continuous as it reached Main Street. Numerous trees were uprooted. Snapped tress fell on several houses, causing substantial damage.

After it crossed Interstate 22, the tornado became more sporadic, but it still managed to uproot more trees, dropping several on houses. The last damage from this tornado was spotted near Lee County Road 1451.

The final tornado produced by the storm started at 10:22 p.m. about 7 miles east of Saltillo in rural Lee County. The EF-0 tornado could only muster wind speeds of 75 mph along the 2-mile length. It lasted four minutes.

According to the NWS, this last tornado produced tree damage along Lee County Road 1970 and Ita-Lee Road. The last damage was seen just south of Highway 363 in the Ratliff community.

A volunteer with Eight Days of Hope helps clean-up efforts along King's Highway in southern Lee County on Tuesday, May 4, 2021, following a series of tornadic storms that cut a path of destruction through Northeast Mississippi on Sunday night. Nonprofits like Eight Days of Hope and the local Red Cross had volunteers on the ground helping with recovery efforts as soon as the winds died down.

Eight Days of Hope, a local faith-based organization that serves those in need after natural disasters, was in the hardest hit areas of Tupelo on Monday afternoon at 1 p.m., planning their response efforts immediately in the hours following the initial storm. Volunteers with the organization helped clean debris, removed trees and stepped in where needed alongside Elvis Presley Drive in Tupelo and affected areas in Pontotoc.

Chandler Gurley, EDOH executive assistant of operations, said the damage he's seen has been major, but not widespread.

“It definitely could have been much worse, but for the people that were affected, it’s a big deal to them," Gurley said. "We’re just trying to do the best we can to love on our community and just use the equipment and the gifts God’s given us just help those right now who can’t help themselves."

EDOH will lead local volunteers all week to serve affected areas. Those 18 years old and up who are willing to volunteer the assist with clean-up efforts are asked to visit 142 Kings Hwy in Pontotoc a 7 a.m. through Friday.

Anyone requiring assistance can email EDOH at rapidresponse@eightdaysofhope.com or call 662-255-7565.

The North Mississippi chapter of the American Red Cross had its disaster assessment team in the field yesterday, primarily assessing damage in Lee and Pontotoc counties. The disaster assessment allows the Red Cross to identify the extent of damage, where it is located, and offer a place for displaced residents to stay if needed.

As of Tuesday morning, no one required sheltering assistance.

“Fortunately, it really seems in our area, while there are a few cases of some major damage in terms of homes ... the damage that is major or destroyed is not widespread,” said North Mississippi chapter director KC Grist. “We went out and spoke to the people if they were around and got a feel for how they were doing. We always want to be sure people are doing OK.”

The Red Cross works with the Emergency Management Agencies of each county before deploying. A team of a dozen or so volunteers were dispatched immediately following Sunday's storms. Others worked virtually.

According to Grist, Red Cross representatives spoke with officials in Calhoun City, which received the brunt of the storm's damage, on Monday, and planned to finish assessment by visiting Calhoun County in the coming days, depending on weather conditions.

While there is no final estimate of the total amount of damage, according to a Tuesday morning briefing, the Red Cross identified approximately 10 to 12 homes that require assistance with major damage across the state, Grist said.

With more weather coming in, Red Cross is encouraging families to be prepared.

“The other night, we didn’t have a lot of warning,” Grist said. “Your best chance of survival is that you’re able to take care of yourself if something like this happens.”

“It definitely could have been much worse, but for the people that were affected, it’s a big deal to them. We’re just trying to do the best we can to love on our community and just use the equipment and the gifts God’s given us just help those right now who can’t help themselves."

TUPELO • Todd Jordan and Jason Shelton once again traded personal barbs at one another on social media — this time over each other’s responses to Sunday’s tornadic storm, which damaged around 90 properties in Tupelo.

At around 10:30 p.m. on Sunday, the two-term Democratic mayor wrote on his personal Facebook account that as the city is experiencing another natural disaster, he’s certain that the next mayor should be someone who is “competent, capable, and qualified.”

“Your next mayor will make the decisions at this moment of how the city responds,” Shelton said in the post. “This is a serious job and we need a serious person to be mayor. The mayor of Tupelo has to have basic competency.”

Although the mayoral candidate’s name is not mentioned in the post, Shelton has previously posted on social media that he believes Jordan isn't competent enough to be the city’s next mayor and that he supports Jordan’s opponent, Democrat Victor Fleitas, as his successor.

Around 3:30 p.m. on Sunday, Shelton also said that he does not believe being mayor is a “hands off job,” which is a more obvious dig at Jordan.

In a previous interview with the Daily Journal, Jordan said he would give more autonomy to leaders of city departments, but he was not extending that to his entire approach to being mayor.

“It is imperative that we have someone who is qualified, capable, and competent to serve, which is why I support Victor Fleitas to serve as our next mayor,” Shelton said. “I hope that you will join me in making sure Tupelo continues on the right track.”

Around 2 p.m. on Monday, Jordan, currently a Lee County supervisor, shot back at Shelton via his campaign’s Facebook page, saying that while the city’s emergency responders were tending to the storm damage, Shelton was “promoting his candidate to replace him” before the damage to the storm was fully known.

“I want you to know that I am a uniter, not a divider,” Jordan wrote in his post. “We’ve had enough of dividing over the last eighteen months. As your next mayor, I want to bring us back to being together for Tupelo. As mayor I want to represent everyone. And I promise you, I will not divide us.”

Jordan has told the Daily Journal in previous interviews that while Shelton has continued to criticize him on social media, the outgoing mayor has been courteous to him over the phone and in one-on-one interactions.

Voters on June 8 will decide which candidate should replace Shelton — Fleitas, the Democratic nominee or Jordan, the Republican nominee.

TUPELO • Todd Jordan, a Lee County supervisor and a realtor, on Tuesday night won the Republican primary for mayor, upending the local politic…