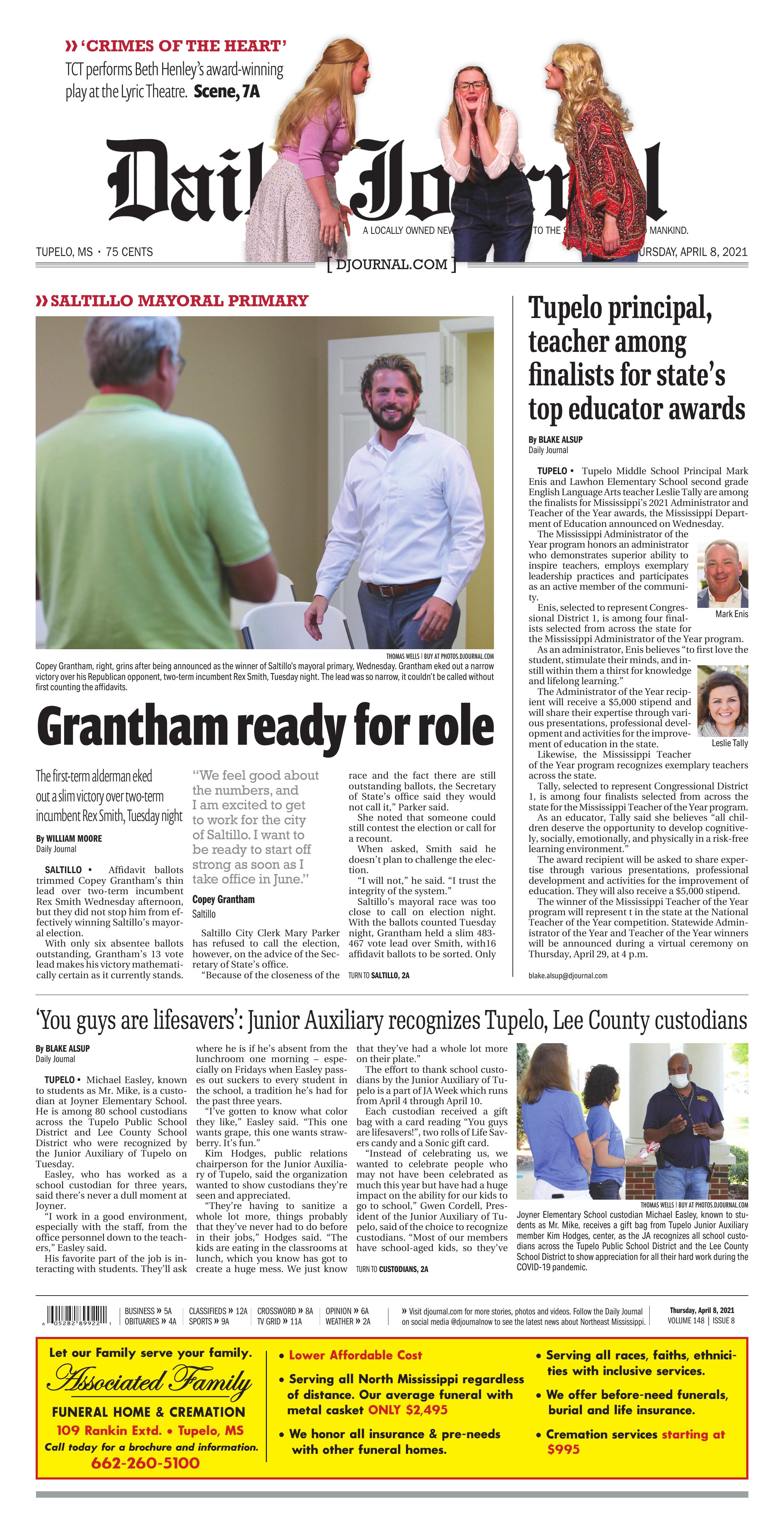 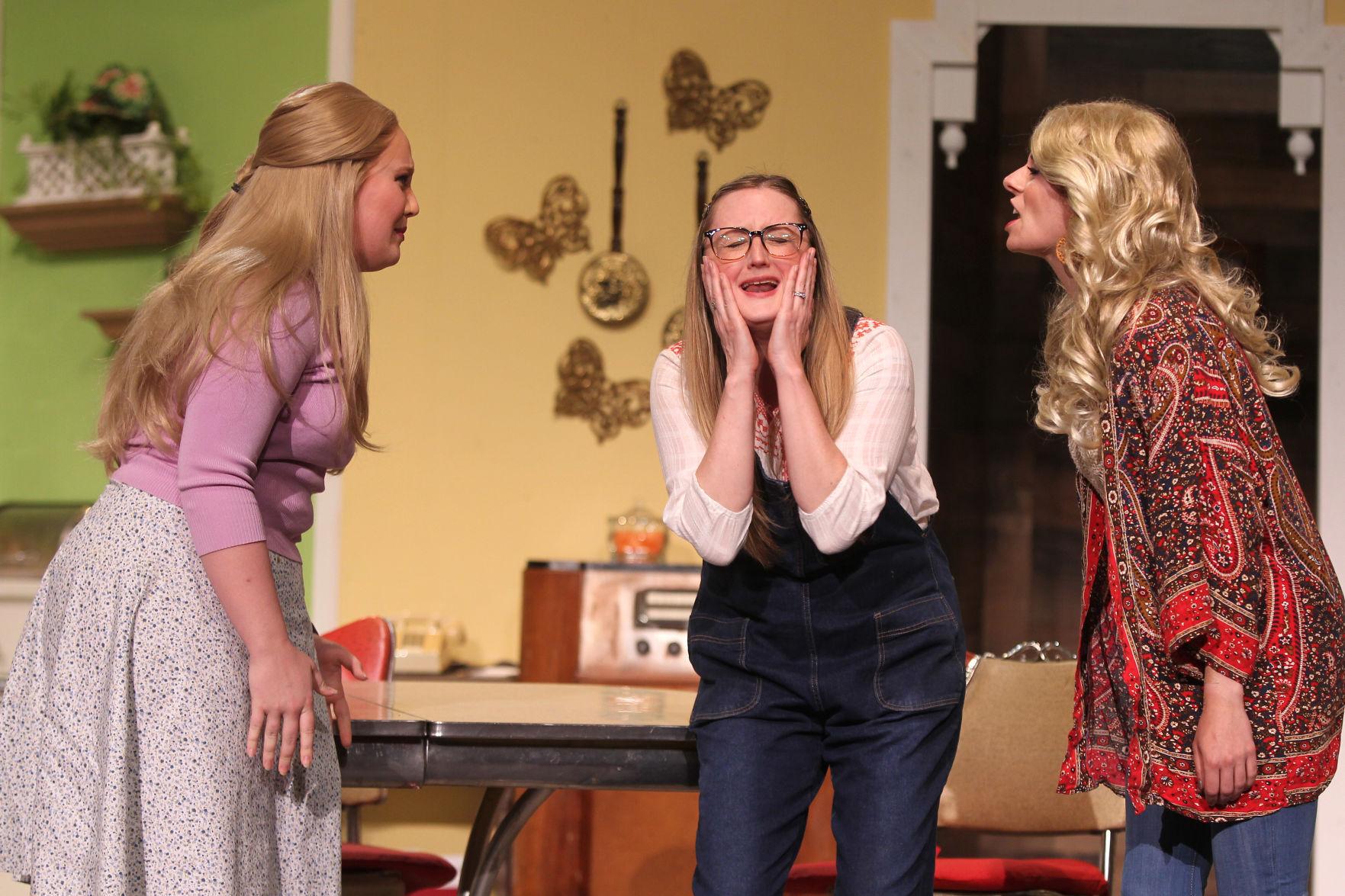 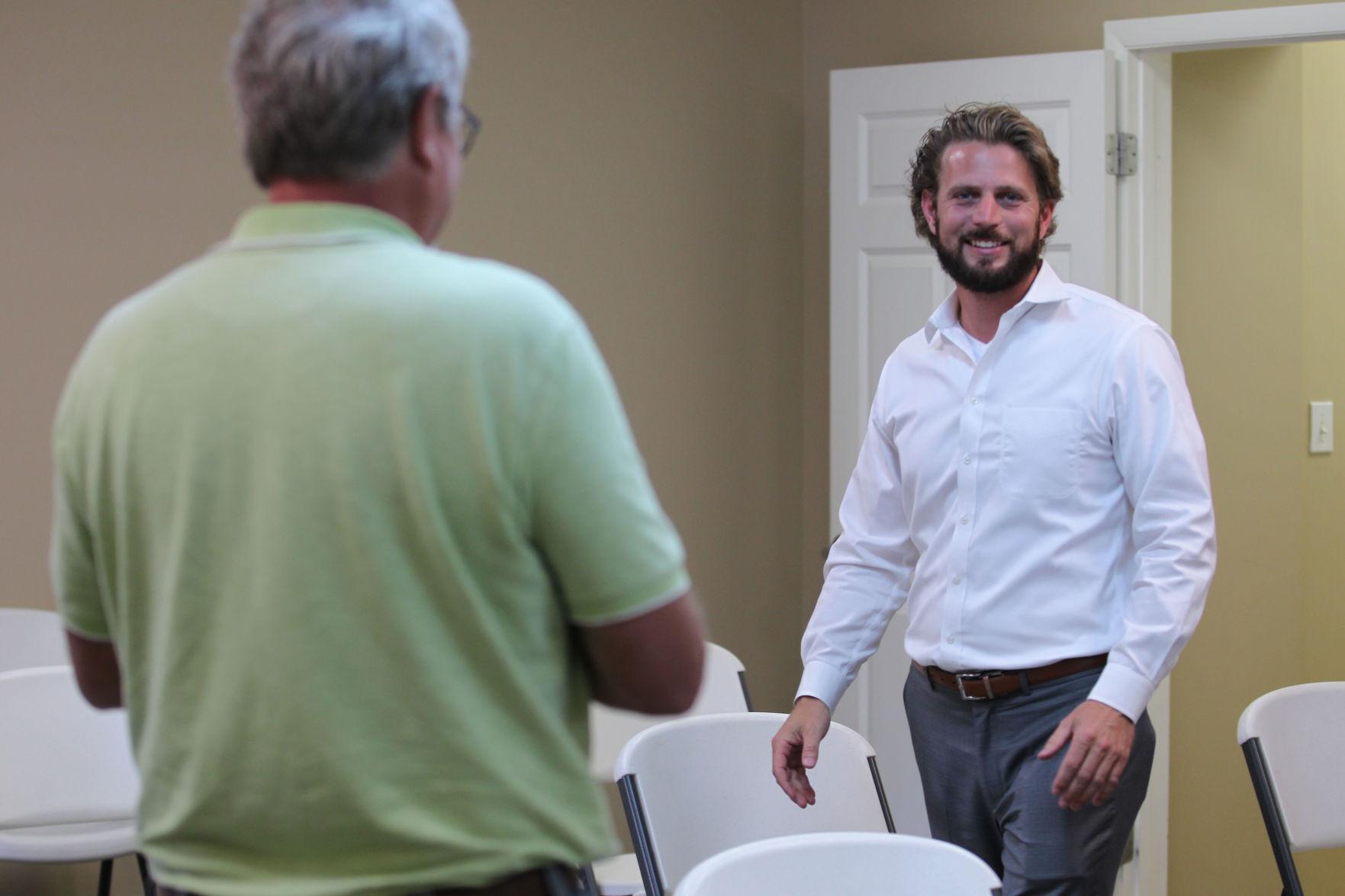 Copey Grantham, right, speaks with a supporter about where to start gathering his election signs after Wednesday's absentee vote count for the Mayor of Saltillo race. Grantham eked out a narrow victory over his Republican opponent, two-term incumbent Rex Smith, Tuesday night. The lead was so narrow, it couldn't be called without first counting the affidavits.

Saltillo City Clerk Mary Parker has refused to call the election, however, on the advice of the Secretary of State’s office.

“Because of the closeness of the race and the fact there are still outstanding ballots, the Secretary of State’s office said they would not call it,” Parker said.

She noted that someone could still contest the election or call for a recount.

When asked, Smith said he doesn't plan to challenge the election.

"I will not," he said. "I trust the integrity of the system."

Saltillo’s mayoral race was too close to call on election night. With the ballots counted Tuesday night, Grantham held a slim 483-467 vote lead over Smith, with16 affidavit ballots to be sorted. Only five of these ballots were cast by people who lived in the city limits and were registered voters. Of the 11 ballots thrown out, six people lived in the city but were not registered voters.

The five extra ballots moved the mayoral totals to 484-471 in Grantham’s favor.

With no Democratic candidate to face in the June 8 general election, Tuesday's primary election all but guarantees Grantham, currently in his first term on the city's board of aldermen, will be Saltillo's next mayor.

Smith chose not to observe as the Republican Municipal Executive Committee counted the affidavit votes, Wednesday, saying he trusted the people doing the counting.

Although the race will not be certified until next Tuesday — the deadline for the absentee ballots to arrive in the mail — Grantham said he is ready to begin shaping his administration.

“We feel good about the numbers, and I am excited to get to work for the city of Saltillo,” Grantham said. “I want to be ready to start off strong as soon as I take office in June.”

He plans to work on the city’s transparency by eliminating most called special meetings. Grantham wants the board of aldermen to return to hosting two regular monthly meetings, and to livestream those meetings for those unable to attend in person.

“I want the citizens to know when we are meeting so they can see how we are spending their tax dollars,” Grantham said.

To improve the relationship between the city and the citizens, he wants to make city hall more open. That includes opening the building during the lunch hour so people can run errands during their midday break.

“I want to run the city more like a small business than a government,” Grantham said.

The affidavits also changed the totals in the aldermen races, but did not affect the rankings.

Brian Morgan still led the way with 474 votes, followed by incumbents Scottie Clark (473) and Terry Glidewell (396). Those three received mathematical majorities and have been elected.

“We feel good about the numbers, and I am excited to get to work for the city of Saltillo. I want to be ready to start off strong as soon as I take office in June.”

Joyner Elementary School custodian Michael Easley, known to students as Mr. Mike, receives a gift bag from Tupelo Junior Auxiliary member Kim Hodges, center, as the JA recognizes all school custodians across the Tupelo Public School District and the Lee County School District to show appreciation for all their hard work during the COVID-19 pandemic.

Tupelo Junior Auxiliary members Gwen Cordell, left, and Kim Hodges present Joyner Elementary School custodian Michael Easley, known to students as Mr. Mike, with a gift bag as the JA recognizes all school custodians across the Tupelo Public School District and the Lee County School District to show appreciation for all their hard work during the COVID-19 pandemic.

TUPELO • Michael Easley, known to students as Mr. Mike, is a custodian at Joyner Elementary School. He is among 80 school custodians across the Tupelo Public School District and Lee County School District who were recognized by the Junior Auxiliary of Tupelo on Tuesday.

Easley, who has worked as a school custodian for three years, said there's never a dull moment at Joyner.

"I work in a good environment, especially with the staff, from the office personnel down to the teachers," Easley said.

His favorite part of the job is interacting with students. They'll ask where he is if he's absent from the lunchroom one morning — especially on Fridays when Easley passes out suckers to every student in the school, a tradition he's had for the past three years.

"I've gotten to know what color they like," Easley said. "This one wants grape, this one wants strawberry. It's fun."

Kim Hodges, public relations chairperson for the Junior Auxiliary of Tupelo, said the organization wanted to show custodians they're seen and appreciated.

"They're having to sanitize a whole lot more, things probably that they've never had to do before in their jobs," Hodges said. "The kids are eating in the classrooms at lunch, which you know has got to create a huge mess. We just know that they've had a whole lot more on their plate."

The effort to thank school custodians by the Junior Auxiliary of Tupelo is a part of JA Week which runs from April 4 through April 10.

Each custodian received a gift bag with a card reading "You guys are lifesavers!", two rolls of Life Savers candy and a Sonic gift card.

"Instead of celebrating us, we wanted to celebrate people who may not have been celebrated as much this year but have had a huge impact on the ability for our kids to go to school," Gwen Cordell, President of the Junior Auxiliary of Tupelo, said of the choice to recognize custodians. "Most of our members have school-aged kids, so they've meant a lot to us."

Emily Lee, second grade teacher, said Easley always goes above and beyond, always sticking his head into the classroom to check in on teachers.

"He's constantly speaking and wanting to know how you are, and just has a such a great rapport with the kids," Lee said. "He is such a leader for them and they look up to him as well."

Easley is a key part of everything students, teachers and administrators at Joyner Elementary School do, according to Principal Kim Foster.

"He helps us contribute to our culture of hospitality and love and care for kids and that's what's most important," . "We don't want to think about doing life without him."

Related
+5 Tupelo principal, teacher among finalists for 2021 Mississippi Administrator and Teacher of the Year
By BLAKE ALSUP Daily Journal
Apr 7, 2021

TUPELO • After serving as associate director of bands for four years, Cliff Moore will take up the baton as director of Tupelo’s bands this summer.

Education
Tupelo principal, teacher among finalists for 2021 Mississippi Administrator and Teacher of the Year

The Mississippi Administrator of the Year program honors an administrator who demonstrates superior ability to inspire teachers, employs exemplary leadership practices and participates as an active member of the community.

Enis, selected to represent Congressional District 1, is among four finalists selected from across the state for the Mississippi Administrator of the Year program. 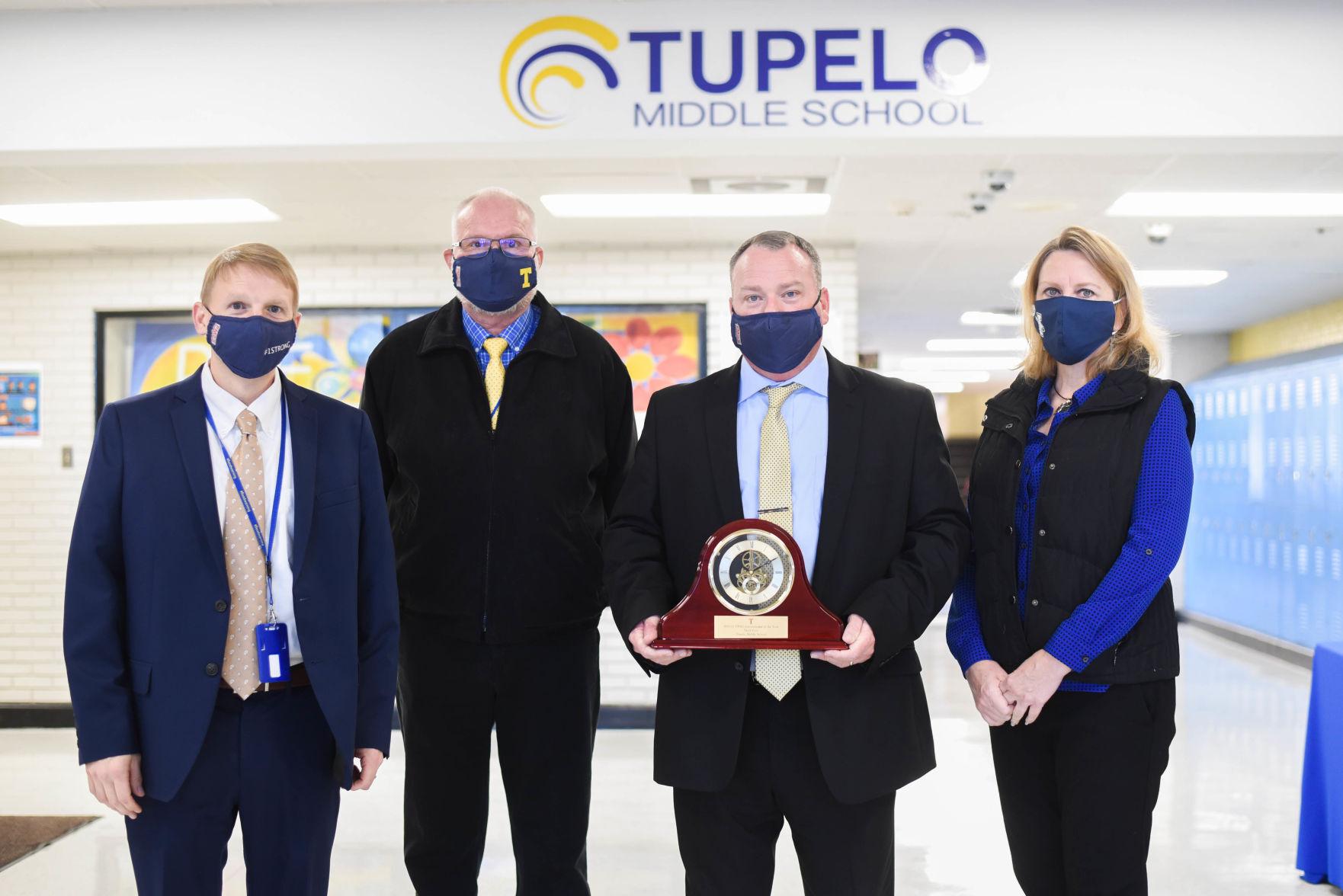 Mark Enis, second from right, has been named Tupelo Public School District’s 2020 Administrator of the Year. Enis is principal at Tupelo Middle School. He is photographed with, from left, assistant superintendent Dr. Brock English, superintendent Dr. Rob Picou and TPSD Board of Trustees member Sherry Davis.

As an administrator, Enis believes "to first love the student, stimulate their minds, and instill within them a thirst for knowledge and lifelong learning."

The Administrator of the Year recipient will receive a $5,000 stipend and will share their expertise through various presentations, professional development and activities for the improvement of education in the state.

Likewise, the Mississippi Teacher of the Year program recognizes exemplary teachers across the state.

Tally, selected to represent Congressional District 1, is among four finalists selected from across the state for the Mississippi Teacher of the Year program. 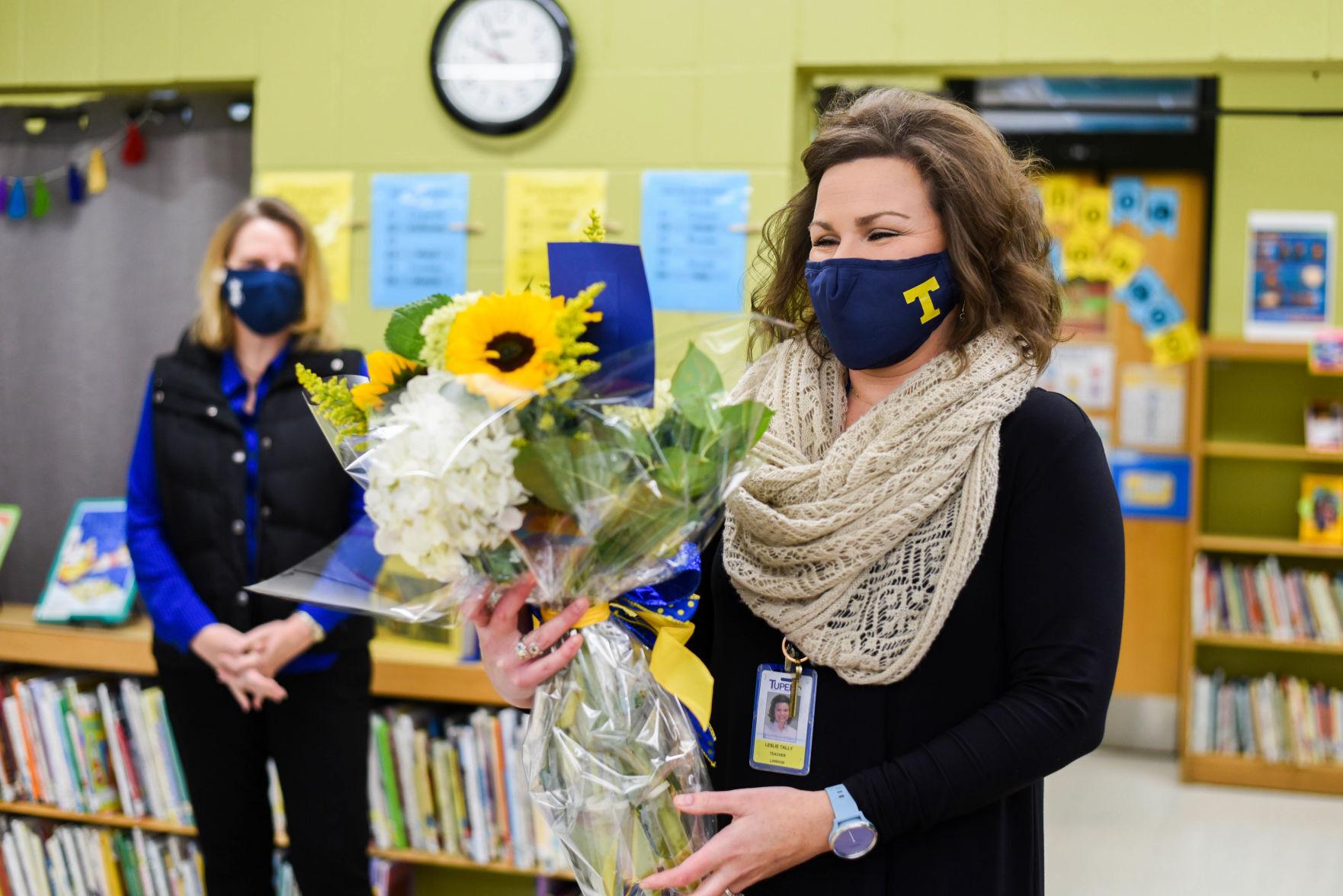 As an educator, Tally said she believes "all children deserve the opportunity to develop cognitively, socially, emotionally, and physically in a risk-free learning environment."

The award recipient will be asked to share expertise through various presentations, professional development and activities for the improvement of education. They will also receive a $5,000 stipend.