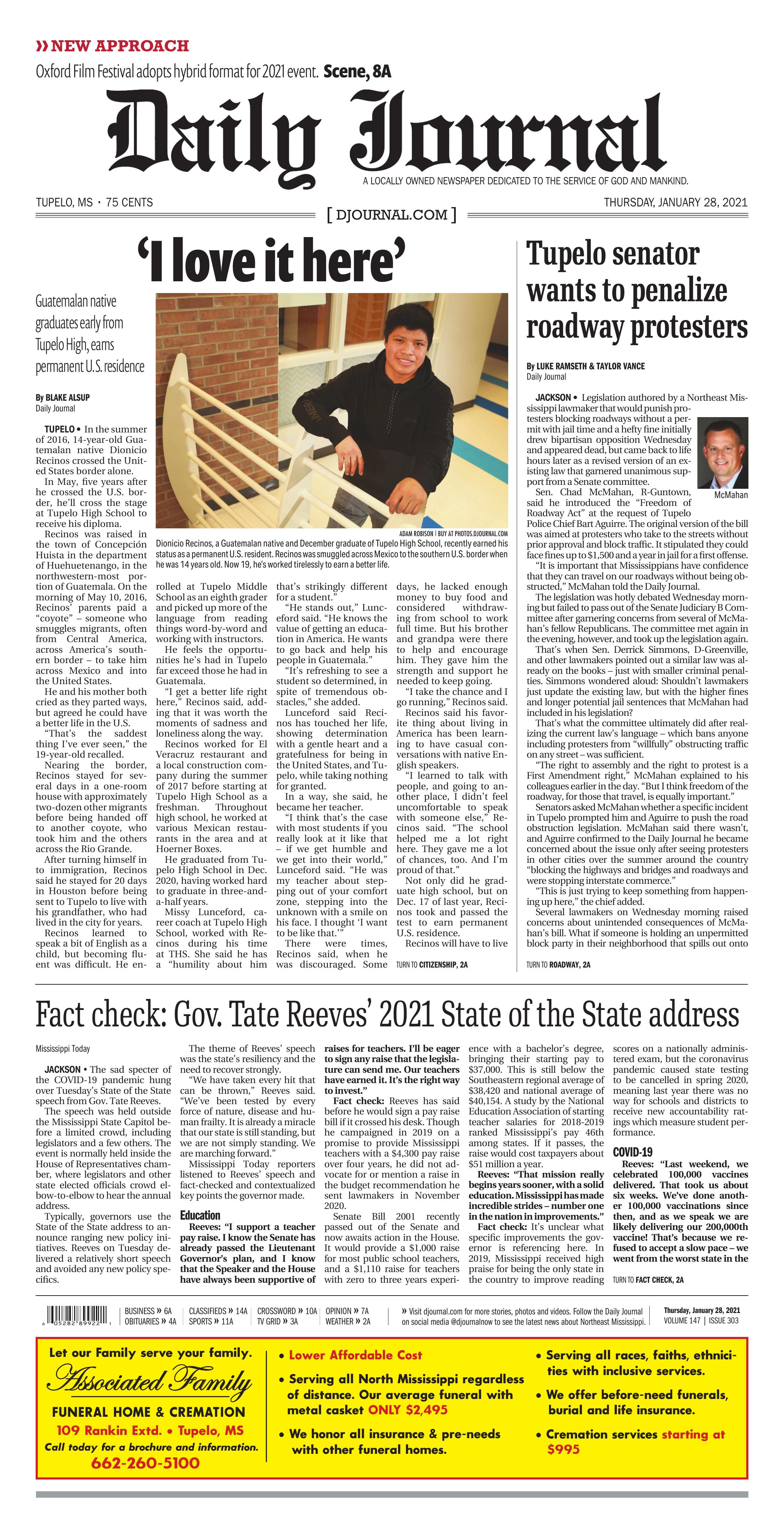 Dionicio Recinos, a Guatemalan native and December graduate of Tupelo High School, recently earned his status as a permanent U.S. resident. Recinos was smuggled across Mexico to the southern U.S. border when he was 14 years old. Now 19, he’s worked tirelessly to earn a better life.

In May, five years after he crossed the U.S. border, he’ll cross the stage at Tupelo High School to receive his diploma.

Recinos was raised in the town of Concepción Huista in the department of Huehuetenango, in the northwestern-most portion of Guatemala. On the morning of May 10, 2016, Recinos’ parents paid a “coyote” – someone who smuggles migrants, often from Central America, across America’s southern border – to take him across Mexico and into the United States.

He and his mother both cried as they parted ways, but agreed he could have a better life in the U.S.

“That’s the saddest thing I’ve ever seen,” the 19-year-old recalled.

Nearing the border, Recinos stayed for several days in a one-room house with approximately two-dozen other migrants before being handed off to another coyote, who took him and the others across the Rio Grande.

After turning himself in to immigration, Recinos said he stayed for 20 days in Houston before being sent to Tupelo to live with his grandfather, who had lived in the city for years.

Recinos learned to speak a bit of English as a child, but becoming fluent was difficult. He enrolled at Tupelo Middle School as an eighth grader and picked up more of the language from reading things word-by-word and working with instructors.

He feels the opportunities he’s had in Tupelo far exceed those he had in Guatemala.

“I get a better life right here,” Recinos said, adding that it was worth the moments of sadness and loneliness along the way.

Recinos worked for El Veracruz restaurant and a local construction company during the summer of 2017 before starting at Tupelo High School as a freshman. Throughout high school, he worked at various Mexican restaurants in the area and at Hoerner Boxes.

He graduated from Tupelo High School in Dec. 2020, having worked hard to graduate in three-and-a-half years.

Missy Lunceford, career coach at Tupelo High School, worked with Recinos during his time at THS. She said he has a “humility about him that’s strikingly different for a student.”

“He stands out,” Lunceford said. “He knows the value of getting an education in America. He wants to go back and help his people in Guatemala.”

“It’s refreshing to see a student so determined, in spite of tremendous obstacles,” she added.

Lunceford said Recinos has touched her life, showing determination with a gentle heart and a gratefulness for being in the United States, and Tupelo, while taking nothing for granted.

In a way, she said, he became her teacher.

“I think that’s the case with most students if you really look at it like that – if we get humble and we get into their world,” Lunceford said. “He was my teacher about stepping out of your comfort zone, stepping into the unknown with a smile on his face. I thought ‘I want to be like that.’”

There were times, Recinos said, when he was discouraged. Some days, he lacked enough money to buy food and considered withdrawing from school to work full time. But his brother and grandpa were there to help and encourage him. They gave him the strength and support he needed to keep going.

“I take the chance and I go running,” Recinos said.

Recinos said his favorite thing about living in America has been learning to have casual conversations with native English speakers.

“I learned to talk with people, and going to another place, I didn’t feel uncomfortable to speak with someone else,” Recinos said. “The school helped me a lot right here. They gave me a lot of chances, too. And I’m proud of that.”

Not only did he graduate high school, but on Dec. 17 of last year, Recinos took and passed the test to earn permanent U.S. residence.

Recinos will have to live in the U.S. for another five years with permanent residence status before he can complete his naturalization test to officially become a citizen. For now, he has received an identification card that will allow him to travel freely between the U.S. and Guatemala.

“Now I have a chance to see my parents again,” Recinos said.

He plans to return to Guatemala this year to spend Christmas with his family for the first time in five years. After sharing the good news about his graduation and U.S. residency, his family is already planning a homecoming party.

“I’m planning to go this December with my brother to stay like a family one more time,” Recinos said. “I was hoping for that, waiting for that.”

Recinos recently started a new job working night shift at Ashley Furniture in Ecru, from 6:30 p.m. to 5 a.m. He said he loves the work.

Walking across the stage and receiving his diploma at Tupelo High School’s graduation ceremony in May will be the culmination of years of hard work. He said he’ll feel happy seeing that diploma hang on the wall.

He dreams of someday joining the United States Marines and plans to build a home in Guatemala one day, a promise he made to his parents before coming to America.

But for the moment, Recinos is satisfied with where he’s at, grateful for the chance he’s had to pursue a better life in the United States.

State-news
Protesting in the road? Tupelo senator says you should pay the price

JACKSON • Legislation authored by a Northeast Mississippi lawmaker that would punish protesters blocking roadways without a permit with jail time and a hefty fine initially drew bipartisan opposition Wednesday and appeared dead, but came back to life hours later as a revised version of an existing law that garnered unanimous support from a Senate committee.

Sen. Chad McMahan, R-Guntown, said he introduced the “Freedom of Roadway Act” at the request of Tupelo Police Chief Bart Aguirre. The original version of the bill was aimed at protesters who take to the streets without prior approval and block traffic. It stipulated they could face fines up to $1,500 and a year in jail for a first offense.

“It is important that Mississippians have confidence that they can travel on our roadways without being obstructed,” McMahan told the Daily Journal.

The legislation was hotly debated Wednesday morning but failed to pass out of the Senate Judiciary B Committee after garnering concerns from several of McMahan’s fellow Republicans. The committee met again in the evening, however, and took up the legislation again.

That’s when Sen. Derrick Simmons, D-Greenville, and other lawmakers pointed out a similar law was already on the books – just with smaller criminal penalties. Simmons wondered aloud: Shouldn’t lawmakers just update the existing law, but with the higher fines and longer potential jail sentences that McMahan had included in his legislation?

That’s what the committee ultimately did after realizing the current law’s language – which bans anyone including protesters from “willfully” obstructing traffic on any street – was sufficient.

“The right to assembly and the right to protest is a First Amendment right,” McMahan explained to his colleagues earlier in the day. “But I think freedom of the roadway, for those that travel, is equally important.”

Senators asked McMahan whether a specific incident in Tupelo prompted him and Aguirre to push the road obstruction legislation. McMahan said there wasn’t, and Aguirre confirmed to the Daily Journal he became concerned about the issue only after seeing protesters in other cities over the summer around the country “blocking the highways and bridges and roadways and were stopping interstate commerce.”

“This is just trying to keep something from happening up here,” the chief added.

Several lawmakers on Wednesday morning raised concerns about unintended consequences of McMahan’s bill. What if someone is holding an unpermitted block party in their neighborhood that spills out onto the street? Sen. Juan Barnett, D-Heidelberg, wondered if they would be in violation of the law. How about if a father puts out orange cones on the road to warn drivers that his children are playing and riding bikes? Sen. Jeremy England, R-Vancleave, wondered if he could face prosecution.

“If that father is protesting speeders in his neighborhood by putting out orange cones, we are now increasing the penalty that father would be liable for – just for trying to protect his family,” England added. “I don’t like us passing bills that might lead us to unintended consequences.”

In the evening, England at first offered to tweak the bill to only cover highways and interstates. But then several lawmakers expressed satisfaction with the existing law save for the lesser penalties – up to $500 or 6 months in county jail for obstructing a road. Lawmakers inserted McMahan’s stiffer penalties – $1,500 and a year in jail – into the existing language. A second offense, committee members agreed, should result in up to a $2,500 fine and at least 30 days in jail, according to the amended bill.