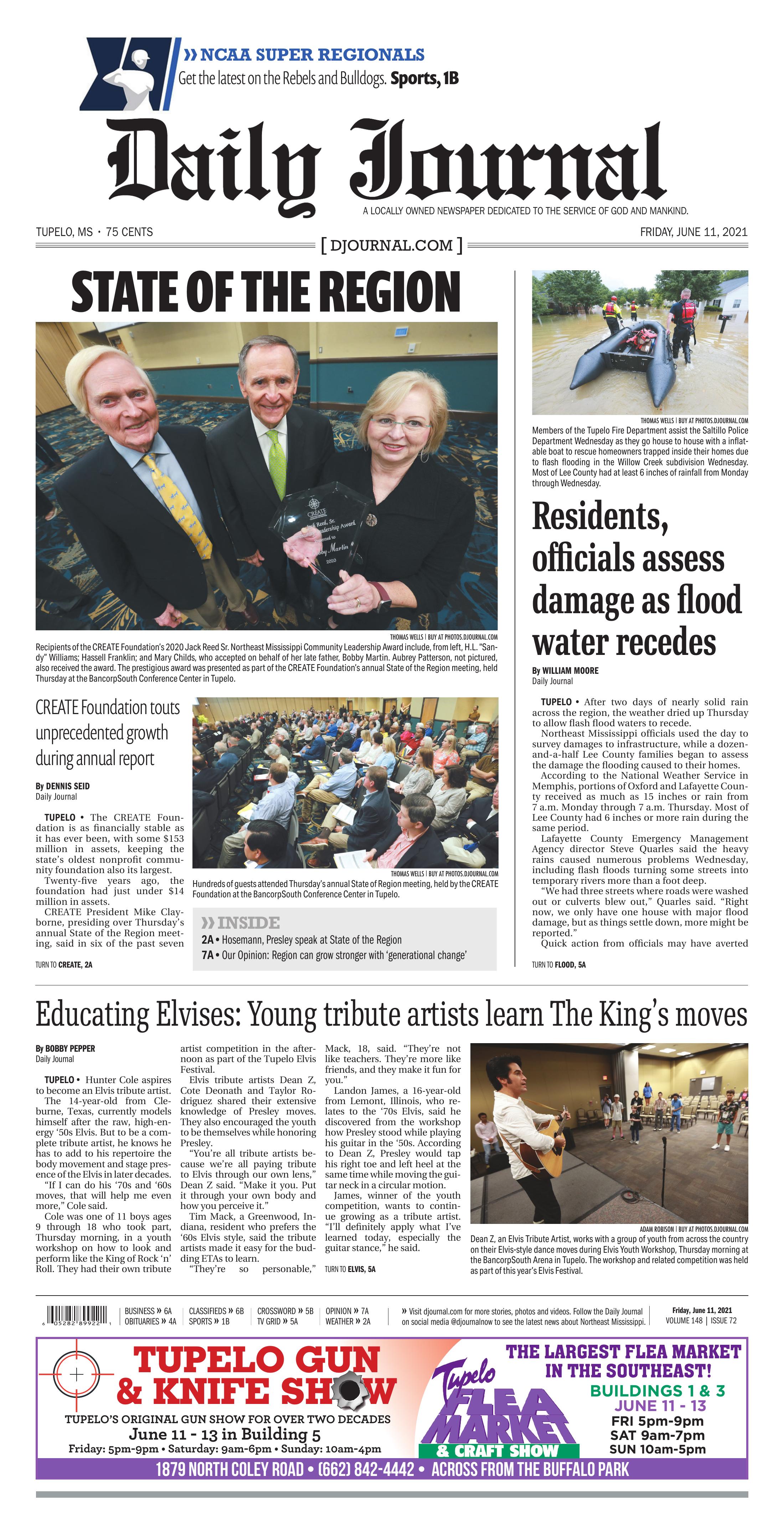 Recipients of the CREATE Foundation’s 2020 Jack Reed Sr. Northeast Mississippi Community Leadership Award include, from left, H.L. “Sandy” Williams; Hassell Franklin; and Mary Childs, who accepted on behalf of her late father, Bobby Martin. Aubrey Patterson, not pictured, also received the award. The prestigious award was presented as part of the CREATE Foundation’s annual State of the Region meeting, held Thursday at the BancorpSouth Conference Center in Tupelo.

Hundreds of guests attended Thursday’s annual State of Region meeting, held by the CREATE Foundation at the BancorpSouth Conference Center in Tupelo.

Lt. Gov. Delbert Hoseman delivers his vision of Mississippi Thursday at the annual State of Region meeting held by the CREATE Foundation.

Public Service Commissioner Brandon Presley informs guests of the progress that is being made throughout the region and the state of getting high speed internet into rural areas during Thursday’s annual State of Region meeting put on by the CREATE Foundation.

TUPELO • The CREATE Foundation is as financially stable as it has ever been, with some $153 million in assets, keeping the state's oldest nonprofit community foundation also its largest.

Twenty-five years ago, the foundation had just under $14 million in assets.

CREATE President Mike Clayborne, presiding over Thursday's annual State of the Region meeting, said in six of the past seven years, more contributions were made to CREATE that exceeded the total that was given in the first 25 years of the organization.

For his part, Presley spoke about what he calls Northeast Mississippi's broadband "revolution."

Presley: 'We're in the midst of a broadband revolution'

TUPELO • A little more than two years ago, Brandon Presley began what he said would be a five-year plan to push for rural broadband access.

As of Thursday morning, nearly 25,000 home owners statewide have fiber-to-the-home broadband, with most of those centered in Northeast Mississippi.

Hosemann, meanwhile, spoke about the achievements of the state legislature and some of the efforts underway for the next session on how to best invest an influx of money — some $5 billion — provided to the state as part of the American Rescue Plan.

Hosemann: Invest money for the next couple of generations

"It's a critical decision for us," Hosemann said. "We don't want this to be one or two years; we want this to one or two generations. So we'll be talking to business leaders on how to spend those funds."

The CREATE meeting brings together representatives from 17 counties in Northeast Mississippi, and each county has a profile produced by the foundation providing and economic and demographic snapshot. An overall report for the region also is published.

Some findings of this year's regional profile:

Clayborne said the continued growth and success of the CREATE Foundation is wholly up to donors.

"The fees off the endowment funds probably funds about 70% of CREATE's operating budget," he said. "These funds are important because they continue year after year to provide support to important things across our region."

"The fees off the endowment funds probably funds about 70% of CREATE's operating budget. These funds are important because they continue year after year to provide support to important things across our region."

Dean Z, an Elvis Tribute Artist, works with a group of youth from across the country on their Elvis-style dance moves during Elvis Youth Workshop, Thursday morning at the BancorpSouth Arena in Tupelo. The workshop and related competition was held as part of this year’s Elvis Festival.

Dean Z, an Elvis Tribute Artist, helps Nevan Castaneda from Aurora, Colorado, perfect a dance move that Elvis once did during his performances in the 1950s.

Dean Z, an Elvis Tribute Artist, works with Michael Burgess, 9, from Charleston South Carolina, with his dance moves that Elvis did during his performances in the 1950's during Elvis youth day Thursday morning.

Logan Ramey, of Chicago, stretches and loosens up as he gets ready for an Elvis Youth Worksohop led by Elvis Tribute Artists Dean Z, Cote Deonath and Taylor Rodriguez.

The 14-year-old from Cleburne, Texas, currently models himself after the raw, high-energy ‘50s Elvis. But to be a complete tribute artist, he knows he has to add to his repertoire the body movement and stage presence of the Elvis in later decades.

Cole was one of 11 boys ages 9 through 18 who took part, Thursday morning, in a youth workshop on how to look and perform like the King of Rock ‘n’ Roll. They had their own tribute artist competition in the afternoon as part of the Tupelo Elvis Festival.

Elvis tribute artists Dean Z, Cote Deonath and Taylor Rodriguez shared their extensive knowledge of Presley moves. They also encouraged the youth to be themselves while honoring Presley.

“You’re all tribute artists because we’re all paying tribute to Elvis through our own lens,” Dean Z said. “Make it you. Put it through your own body and how you perceive it.”

Tim Mack, a Greenwood, Indiana, resident who prefers the ‘60s Elvis style, said the tribute artists made it easy for the budding ETAs to learn.

“They’re so personable,” Mack, 18, said. “They’re not like teachers. They’re more like friends, and they make it fun for you.”

Landon James, a 16-year-old from Lemont, Illinois, who relates to the ‘70s Elvis, said he discovered from the workshop how Presley stood while playing his guitar in the ‘50s. According to Dean Z, Presley would tap his right toe and left heel at the same time while moving the guitar neck in a circular motion.

Even though the budding artists want to continue honoring Presley, Dean Z encouraged them not to overlook their education.

“Make sure your schooling is a priority and get good grades,” he said. “That is the most important thing in the world. Elvis is for our fun. This is where we get to have a good time, celebrate his music and make people happy.”

TUPELO • After two days of nearly solid rain across the region, the weather dried up Thursday to allow flash flood waters to recede.

Northeast Mississippi officials used the day to survey damages to infrastructure, while a dozen-and-a-half Lee County families began to assess the damage the flooding caused to their homes.

According to the National Weather Service in Memphis, portions of Oxford and Lafayette County received as much as 15 inches or rain from 7 a.m. Monday through 7 a.m. Thursday. Most of Lee County had 6 inches or more rain during the same period.

“We had three streets where roads were washed out or culverts blew out,” Quarles said. “Right now, we only have one house with major flood damage, but as things settle down, more might be reported.”

Quick action from officials may have averted severe damage just north of Oxford. Wednesday afternoon, residents downstream from Tara Estates on County Road 102 were asked to evacuate their homes when a sinkhole started forming in embankment of Lake Tara Dam.

“The fire department and (the Mississippi Department of Environmental Quality) helped pump water out of the lake,” Quarles said. “They were able to get it down to a safe level, and we are not worried about it causing any damage.

In Lee County, at least 18 houses in the Saltillo and Guntown areas suffered flood damage. The bulk of the damage was in the flood-plagued Willow Creek subdivision in Saltillo. The neighborhood drains though a small culvert under a railroad track. In heavy rains, the culvert is overloaded and the water backs up, tuning the subdivision into a detention pond. The same streets also flooded in 2019.

“We got an incredible amount of rain in a short period of time,” said Saltillo Mayor Rex Smith. “We opened up the community room at city hall in case any of the displaced families needed a place to stay, but no one took advantage of it.”

The water had receded for the most part by Thursday morning, and city officials were out assessing damage. Smith said the Federal Emergency Management Agency (FEMA) is expected to be in town next week looking at the damage.

“Since this is the second flood event in that area in two years, FEMA might have to change the flood insurance criteria,” said Lee County EMA director Lee Bowdry. “They can’t keep throwing good money after bad.”

Bowdry and his staff took advantage of the drier Thursday to head out to affected areas and begin the damage assessment process. He said road crews are reporting that damages weren’t as widespread or as bad as initially thought.

“After talking to (county road manager Tim Allred), they hope to have most of the roads they had to close opened back up pretty quickly, possible by Friday afternoon,“ he said.

There is more rain in the forecast over the next two days, with possible thunderstorms Friday and Saturday. But after this weekend, sunny (or at least partly cloudy) days are expected to return for all of next week to allow the region to dry out.