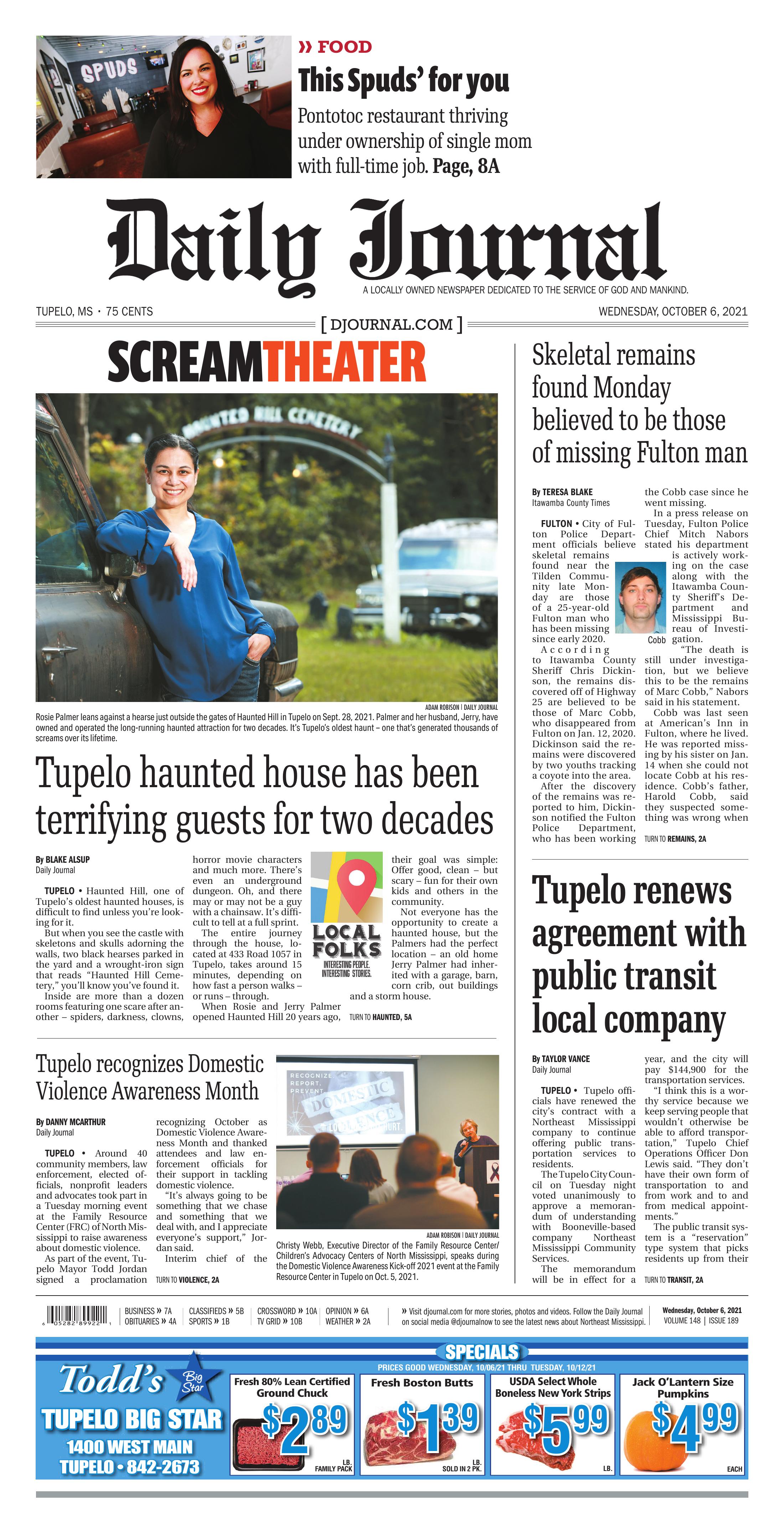 TUPELO • Haunted Hill, one of Tupelo's oldest haunted houses, is difficult to find unless you're looking for it. 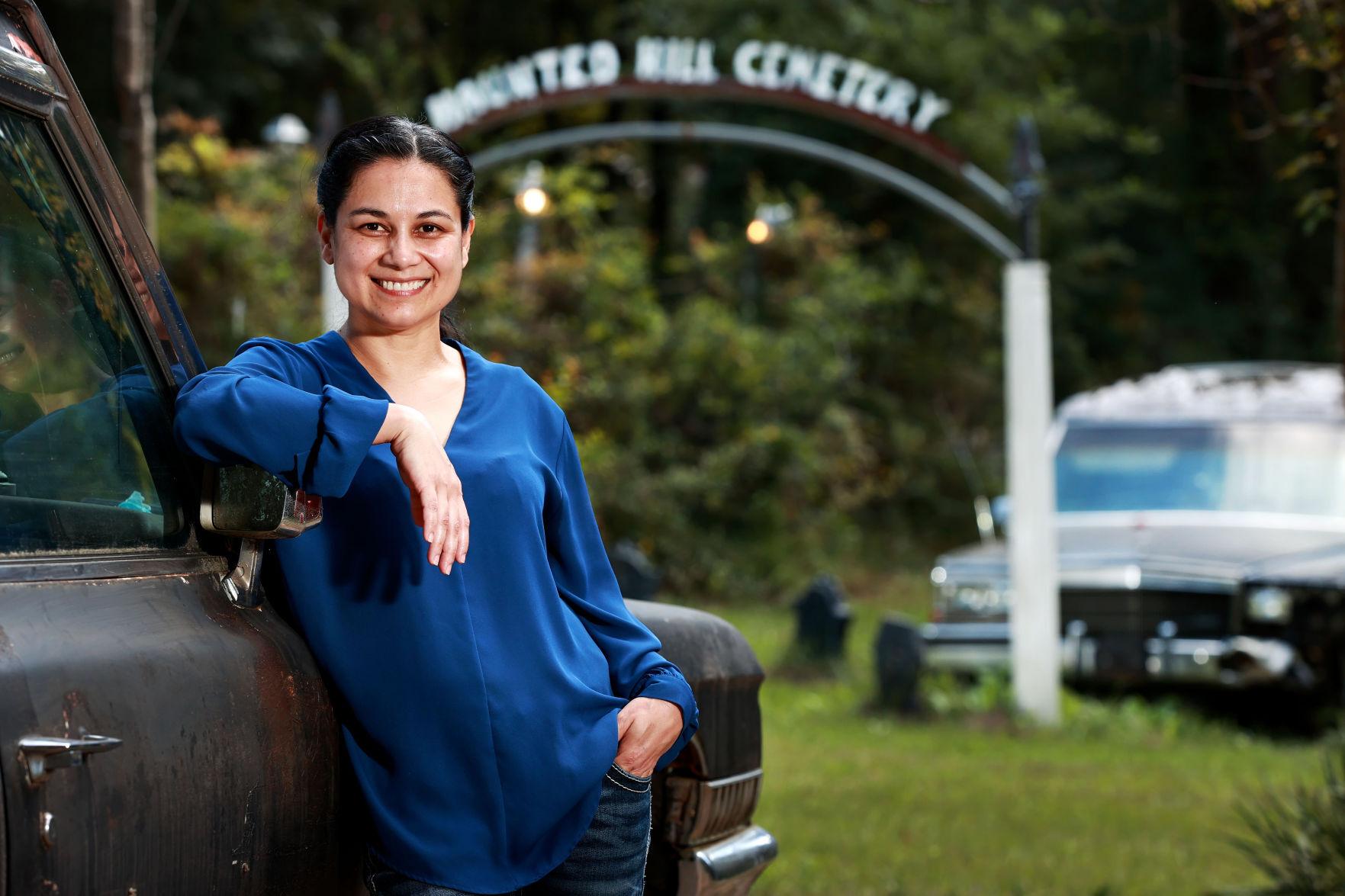 Rosie Palmer stands just outside the gates of Haunted Hill in Tupelo on Sept. 28, 2021. Palmer and her husband, Jerry, have owned and operated the long-running haunted attraction for two decades. It's Tupelo's oldest haunt — one that's generated thousands of screams over its lifetime.

But when you see the castle with skeletons and skulls adorning the walls, two black hearses parked in the yard and a wrought-iron sign that reads "Haunted Hill Cemetery,” you'll know you've found it.

Inside are more than a dozen rooms featuring one scare after another — spiders, darkness, clowns, horror movie characters and much more. There’s even an underground dungeon. Oh, and there may or may not be a guy with a chainsaw. It’s difficult to tell at a full sprint.

The entire journey through the house, located at 433 Road 1057 in Tupelo, takes around 15 minutes, depending on how fast a person walks — or runs — through.

When Rosie and Jerry Palmer opened Haunted Hill 20 years ago, their goal was simple: Offer good, clean — but scary — fun for their own kids and others in the community.

Not everyone has the opportunity to create a haunted house, but the Palmers had the perfect location — an old home Jerry Palmer had inherited with a garage, barn, corn crib, out buildings and a storm house.

"We just made tunnels between them," Jerry Palmer said. "From one to the next."

While some decorations are homemade, many came from Spencer's, Spirit Halloween, etc. And a friend came in and helped with the motion-activated and automated noises and scares throughout. 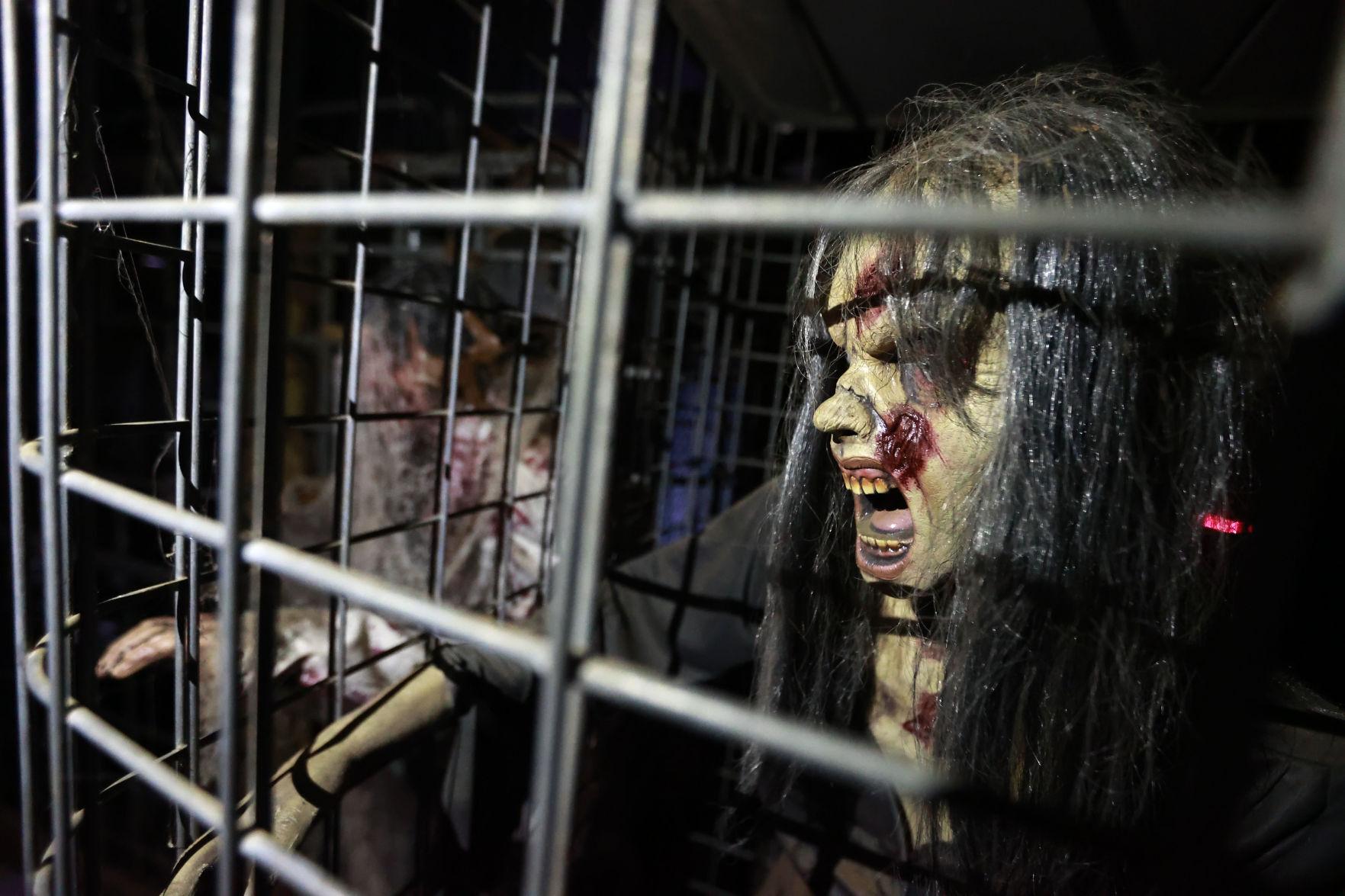 Caged zombies await passersby inside Haunted Hill in Tupelo on Sept. 28, 2021. Over the years, the attraction has grown in size and complexity. It now features more than a dozen actors, along with countless special effects and other tricks sure to draw the screams out of those foolish enough to step through its doors.

"Every year, something changes," Jerry Palmer said. "The majority was there, but every year, we add. So you’ve got 20 years of additions."

The Palmers' favorite part of operating a haunted house is, and has always been, the laughs they get from scaring customers.

"Our sides are hurting by the end of the night," Jerry Palmer said.

The night a guest vanished at Haunted Hill

With 20 years of scaring people behind them, the Palmers have plenty of stories to tell. The most memorable, however, is the night a guest disappeared.

Years ago, a group of friends entered Haunted Hill and, as is so often the case in scary stories, one of them didn’t come out. 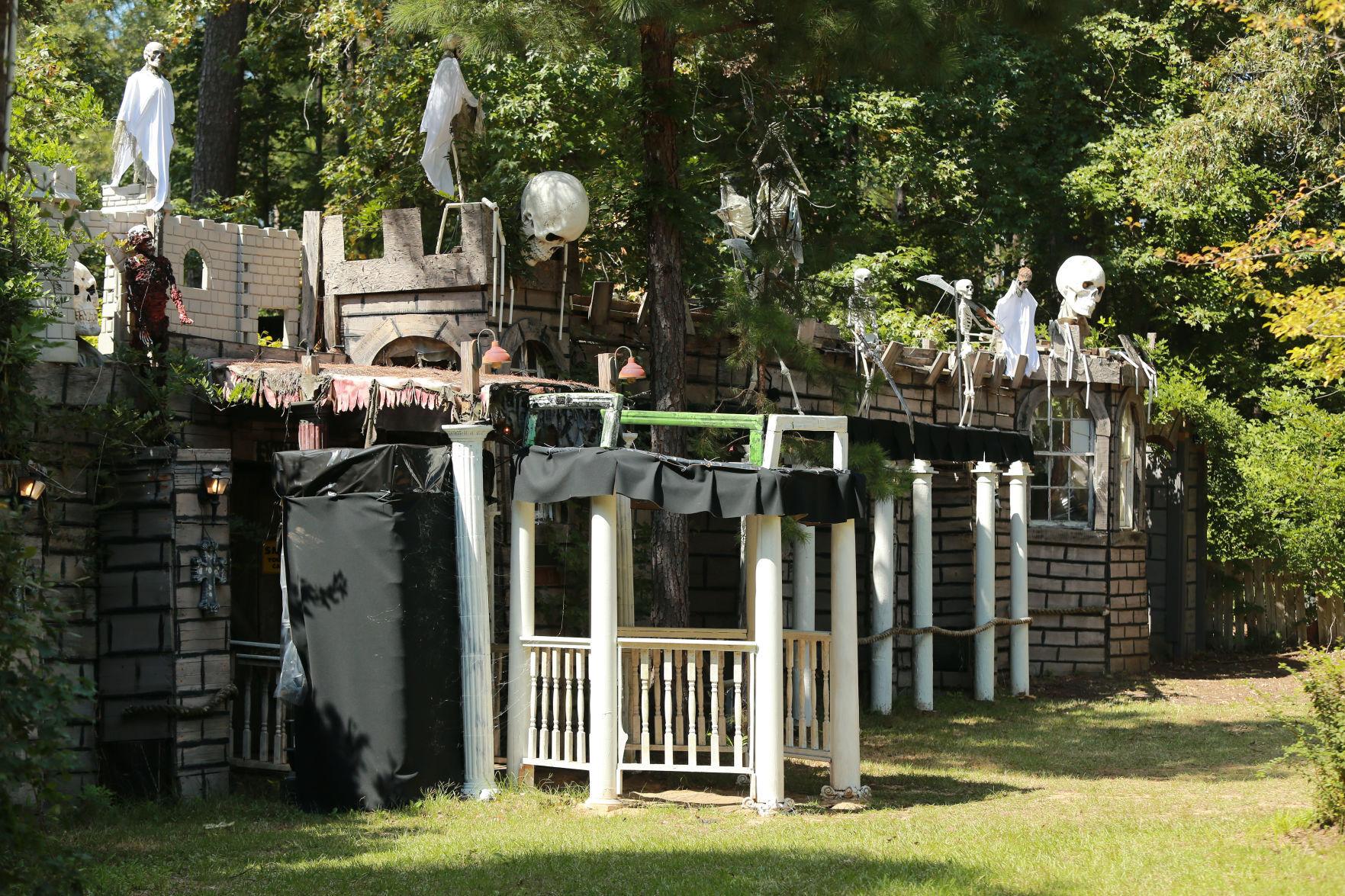 Haunted Hill in Tupelo distinguishes itself from other homes in the neighborhood by being slightly creepier than average.

It was as if he had vanished.

Haunted Hill employees let customers still exploring the haunt clear out and stopped new guests from entering. The Palmers and the lost guest’s friends, flashlights in hand, entered Haunted Hill in search of the missing man.

Nothing. They couldn't find him.

Perplexed, but with nothing else they could do, the friends left Haunted Hill and the Palmers resumed allowing guests to enter the attraction.

The next night, the group returned to let the Palmers know that they'd eventually found their friend. He had been so scared that when he ran out at the end of the haunted house, he’d hoofed it off the property and down the road. His friends had picked him up a short distance from the attraction, making his way back to Tupelo.

Years later, "the guy that disappeared one night" is still a story the couple loves to tell.

"It was worrisome," Jerry Palmer said. "But after they came back the next night, it was hilarious. We still talk about it."

In the early years, the family would place signs on the road and around Tupelo to advertise, but that's hardly necessary anymore.

A combination of repeat customers and positive word-of-mouth keeps a steady stream of visitors tiptoeing through the halls of Haunted Hill on autumn nights. 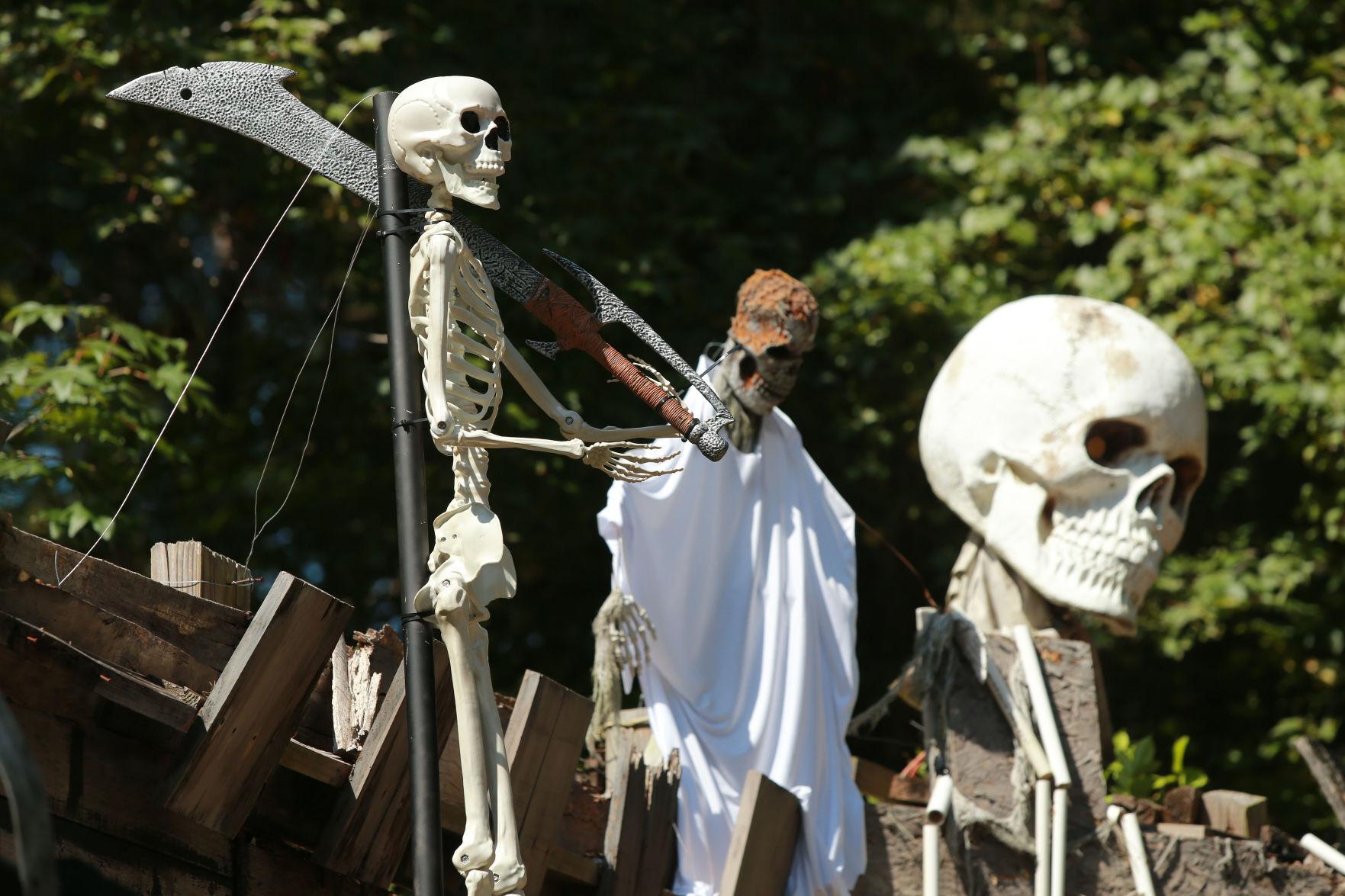 A skeleton guard stands posted above the gate of Haunted Hill haunted attraction in Tupelo on Sept. 28, 2021.

The Palmers plan to continue the scares for as long as they can. Although keeping the haunt updated, and the scares genuinely scary after so many years, is a challenge, it’s one the Palmers still find enjoyable. And Haunted Hill continues to grow and change. Almost as if the house itself is … alive.

Along with changes to the layout and displays within the house, Haunted Hill has more than a dozen employees who dress up in masks and costumes, ready to frighten guests every time they turn a corner.

Fog machines, lights, organ music and sound effects, which have been gradually added over the years, add to the ambiance. 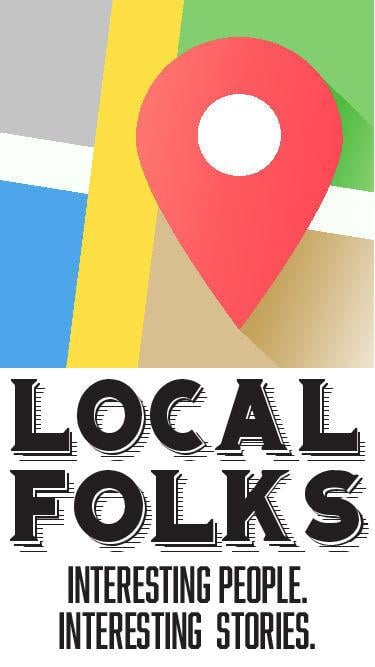 Even though the haunted house itself changes from year to year, the goal has remained the same for 20 years: To offer family fun to anyone in Northeast Mississippi who'd like to stop by.

And don’t forget to scream.

»Read next from Blake Alsup:

As part of the event, Tupelo Mayor Todd Jordan signed a proclamation recognizing October as Domestic Violence Awareness Month and thanked attendees and law enforcement officials for their support in tackling domestic violence.

Interim chief of the Tupelo Police Department Jackie Clayton and Lee County Sheriff Jim Johnson both talked about the efforts to advocate for domestic violence victims.

Clayton said the changes represent positive growth in how law enforcement responds to the victims of domestic violence.

“I’m glad to be a part of this change of attitude,” Clayton said. “We help the victims now, and that’s what we should do. As you can tell from the stats, we still have plenty to do.”

Because domestic violence is often hidden, Hatch said the only way to shed light on the issue is by working together as a community.

Juli Palmer, director of the Children's Advocacy Center (CAC) of FRC, said a large percentage of the children they work with across their 13-county coverage area witness domestic violence firsthand. Domestic violence “has a ripple effect,” which she said leads to children experiencing some of the trauma they have seen and heard. She encouraged attendees to report any suspicion of domestic violence or child abuse.

FRC program director Sheila Davis said Tuesday’s program was important for raising efforts to collaborate with other organizations to ensure families have the resources to be heard and seen. During the pandemic, Davis has seen an increase of violence in the community, but is thankful there is a strong force locally to stand behind families and victims.

“Mothers, grandmothers, aunts, uncles, workplace, churches — it goes through like a roaring fire and just burns down things and just destroys,” she said. “Hopefully we can help people rebuild and regain freedom and regain peace in their lives."

FULTON • City of Fulton Police Department officials believe skeletal remains found near the Tilden Community late Monday are those of a 25-year-old Fulton man who has been missing since early 2020.

According to Itawamba County Sheriff Chris Dickinson, the remains discovered off of Highway 25 are believed to be those of Marc Cobb, who disappeared from Fulton on Jan. 12, 2020. Dickinson said the remains were discovered by two youths tracking a coyote into the area.

After the discovery of the remains was reported to him, Dickinson notified the Fulton Police Department, who has been working the Cobb case since he went missing.

In a press release on Tuesday, Fulton Police Chief Mitch Nabors stated his department is actively working on the case along with the Itawamba County Sheriff’s Department and Mississippi Bureau of Investigation.

“The death is still under investigation, but we believe this to be the remains of Marc Cobb,” Nabors said in his statement.

Cobb was last seen at American’s Inn in Fulton, where he lived. He was reported missing by his sister on Jan. 14 when she could not locate Cobb at his residence. Cobb’s father, Harold Cobb, said they suspected something was wrong when his son failed to show up for work that day. Cobb was employed by Max Home, also located off Access Road in Fulton.

Marc Cobb had no vehicle and never picked up his last paycheck from his employer.

In the days following Cobb’s disappearance, Fulton Police Department conducted several searches in and around the area where he was last seen. Those searches failed to yield clues to his whereabouts.

The remains have been sent to the Mississippi Crime Lab in Jackson for official identification.

In this 2018 file photo, Mickey Holland, a driver for Tupelo Transit, drives through The Pines Apartment Complex, a stop on his Blue Line route, last year during the start of the city’s public transportation program. On Tuesday, the Tupelo City Council voted to renew the city's contract with Booneville-based Northeast Mississippi Community services to provide reservation-based public transportation.

The memorandum will be in effect for a year, and the city will pay $144,900 for the transportation services.

Get breaking news alerts from the Daily Journal app

“I think this is a worthy service because we keep serving people that wouldn't otherwise be able to afford transportation,” Tupelo Chief Operations Officer Don Lewis said. “They don't have their own form of transportation to and from work and to and from medical appointments.”

The public transit system is a “reservation” type system that picks residents up from their homes and transports them to other locations. Lewis said a large portion of the people who utilize the service are traveling to or from work or medical appointments.

The memorandum states that the transportation service will utilize at least one bus and five vans to service customers from 6 a.m. to 7 p.m. on Monday through Friday. Customers must pay $2 for a one-way ticket.

Steve Gaines, the CEO of Northeast Mississippi Community Services, told the Daily Journal that the COVID-19 pandemic initially led to fewer people utilizing the transportation service, but it’s beginning to increase again to the point where more drivers may need to be hired.

“We’ve enjoyed our partnership thus far and we hope to continue to do this,” Gaines said. “We feel like it’s very successful to this point. We’d love to see it grow.”

Citizens should call and request to be picked up from their home or another local by calling 48 hours in advance. If a customer cannot give a 48-hour notice, that is not a “deal breaker,” but it is the main way to completely guarantee that transportation services can be provided to them.

Want updates sent to your inbox? Subscribe to The Daily, our all-you-need-to-know newsletter.

At one point, the city had two methods of public transit: one was a fixed route system that operated on a continuous loop, and the other was an “on demand” system where elderly and disabled citizens could call and request to be picked up from their home by calling 48 hours in advance.

The city voted to do away with the fixed route system in 2019 and offer the reservation-type system citywide.

Gaines said that the company reached its peak with the city’s transportation services in 2020 when it serviced around 2,000 customers one month. But the pandemic slowed things down considerably.