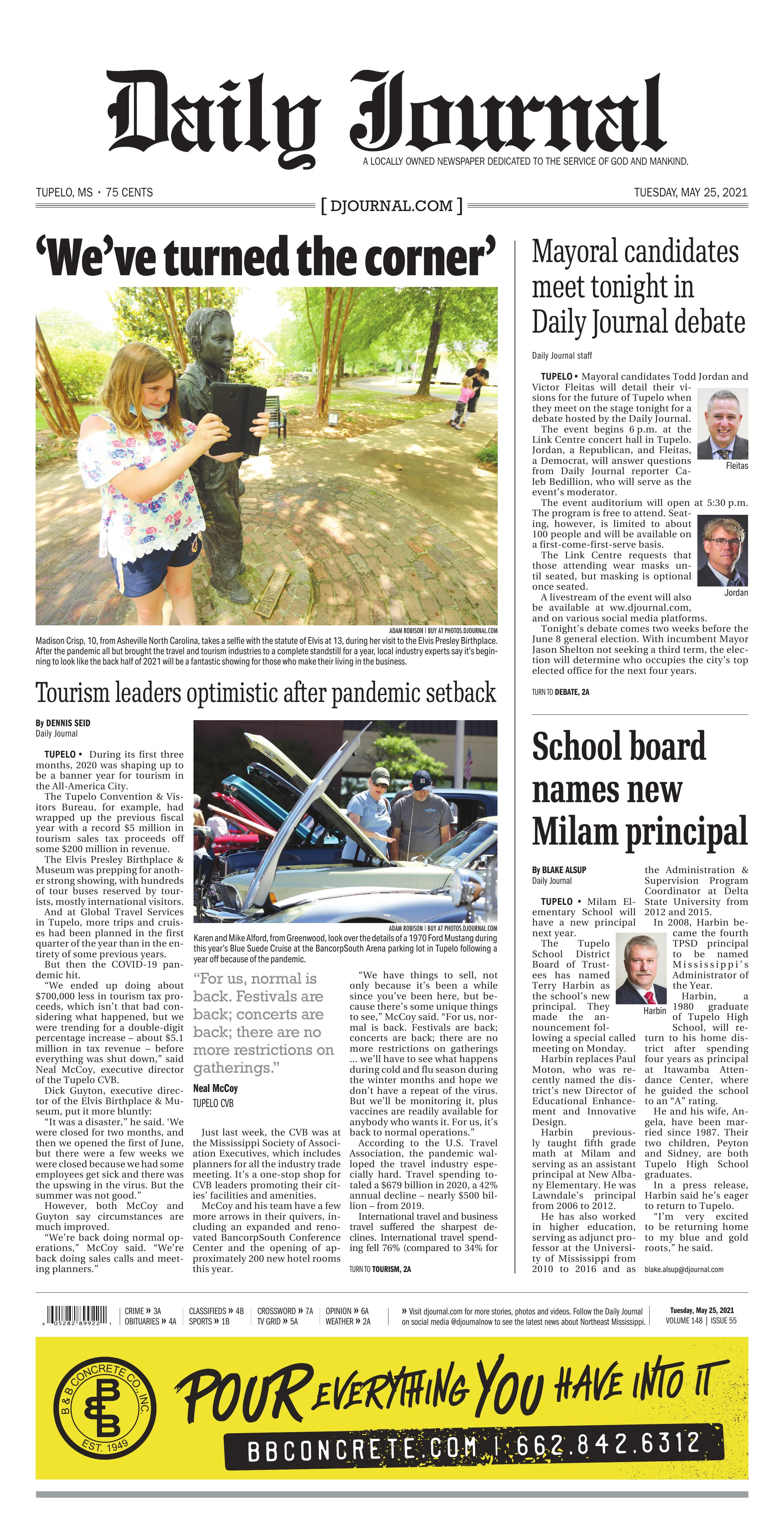 Madison Crisp, 10, from Asheville North Carolina, takes a selfie with the statute of Elvis at 13, during her visit to the Elvis Presley Birthplace. After the pandemic all but brought the travel and tourism industries to a complete standstill for a year, local industry experts say it's beginning to look like the back half of 2021 will be a fantastic showing for those who make their living in the business.

Karen and Mike Alford, from Greenwood, look over the details of a 1970 Ford Mustang during this year's Blue Suede Cruise at the BancorpSouth Arena parking lot in Tupelo following a year off due to the coronavirus.

Elvis fans come and go while visiting the Birthplace on its reopening day last year after being closed temporarily due to the coronavirus.

Visitors look around the grounds of the Elvis Presley Birthplace before entering the chapel on the reopening day for the Birthplace after being closed due to the coronavirus last year.

TUPELO • During its first three months, 2020 was shaping up to be a banner year for tourism in the All-America City.

The Tupelo Convention & Visitors Bureau, for example, had wrapped up the previous fiscal year with a record $5 million in tourism sales tax proceeds off some $200 million in revenue.

The Elvis Presley Birthplace & Museum was prepping for another strong showing, with hundreds of tour buses reserved by tourists, mostly international visitors.

And at Global Travel Services in Tupelo, more trips and cruises had been planned in the first quarter of the year than in the entirety of some previous years.

But then the COVID-19 pandemic hit.

"We ended up doing about $700,000 less in tourism tax proceeds, which isn't that bad considering what happened, but we were trending for a double-digit percentage increase – about $5.1 million in tax revenue – before everything was shut down," said Neal McCoy, executive director of the Tupelo CVB.

"It was a disaster," he said. 'We were closed for two months, and then we opened the first of June, but there were a few weeks we were closed because we had some employees get sick and there was the upswing in the virus. But the summer was not good."

However, both McCoy and Guyton say circumstances are much improved.

Just last week, the CVB was at the Mississippi Society of Association Executives, which includes planners for all the industry trade meeting. It's a one-stop shop for CVB leaders promoting their cities' facilities and amenities.

McCoy and his team have a few more arrows in their quivers, including an expanded and renovated BancorpSouth Conference Center and the opening of approximately 200 new hotel rooms this year.

"We have things to sell, not only because it's been a while since you've been here, but because there's some unique things to see," McCoy said. "For us, normal is back. Festivals are back, concerts are back, there are no more restrictions on gatherings ... we'll have to see what happens during cold and flu season during the winter months and hope we don't have a repeat of the virus. But we'll be monitoring it, plus vaccines are readily available for anybody who wants it. For us, it's back to normal operations."

According to the U.S. Travel Association, the pandemic walloped the travel industry especially hard. Travel spending totaled a $679 billion in 2020, a 42% annual decline — nearly $500 billion — from 2019.

The pandemic heavily impacted the travel economies of every state and territory. Hawaii suffered the most of any state, a 60% decline, while Mississippi suffered the least with a 26% decline.

In total, 18 states and territories experienced a greater than 40% downturn in travel spending. All told the pandemic resulted in a loss of $64 billion in federal, state and local tax revenue.

Guyton saw an unprecedented drop in attendance at the popular destination, where about half of the visitors are international travelers.

With travel restrictions in place, the valve to the pipeline of visitors from Europe and Asia all but closed.

At least 200 bus tours were cancelled from last March through the end of the year — a devastating hit.

"Business was off about 65% last year," Guyton said. "Until about the first part of March it was still slow. But March is traditionally when we start picking up, and that's what's happened this year. People are traveling, people got their stimulus checks, and their tax refunds and they're going out again."

Guyton estimates business is back to about 85% of what it was pre-pandemic. And the fall is lining up to be a good one, with several bus tours booked in advance.

"I think we've turned the corner," he said. "We had shortened our hours, but we've expanded them again, employees are able to take time off again ... things are looking good again."

At Global Travel Services, the nearly 50-year-old business is as busy as ever.

Keisha Gholston said it's a stark contrast from a year ago, when clients were having to cancel tours and cruises.

"Since spring break, our business has really started booming, with people getting vaccinated and traveling again," she said. "And with people sitting at home for a year, folks really are interested in going."

The most popular destinations are any of the National Parks, as well as Mexico and the Dominican Republic. Other favorite Caribbean destinations are St. Lucia, Jamaica and Barbados, Gholston said.

Europe, however, is still in flux, with much of the continent still closed to international travel, although Italy has indicated it will be lifting restrictions soon. Cruises also are still on hold.

"People are really choosing traveling stateside because there's a fear of testing positive while being out of the country and then being stuck there for so many days before testing negative and coming home," Gholston said.

Walt Disney World and Universal Studios in Orlando, Florida remain popular, and the lifting of restrictions will open the theme parks further.

Gholston said some National Parks are requiring reservations to enter now, and it's best to check with the parks or a travel agent to be sure.

Most important for any traveler, regardless of destination, is to plan and book and early as possible.

"Everything is filling up quickly because people are wanting to travel again," she said. "I've had people drop by and ask if there are any last-minute deals to be had, and no, there aren't."

Last month's highly successful and well-attended Blue Suede Cruise was the unofficial kickoff of tourism season in Tupelo, and McCoy said it couldn't have gone much smoother.

Hotel occupancy for that weekend was an astonishing 91%. Even better for hoteliers were the rates.

"Pre-pandemic, hotel rates for Tuesday, Wednesday, Thursday outpaced the weekend. But post-pandemic, that's reversed," McCoy said. "That's something the CVB has wanted to do for a long time, because hotel rates higher on weekend mean there's more demand on the weekends. We can't really control business travel and we can't incentivize, but we can market and promote weekend travel and have some effect on weekend demand."

As good as it seems right now, McCoy said business could be even better. But a lack of workers is a problem in the hospitality and tourism industry, which is holding back quite a bit of business.

"It could be greater," McCoy said. "The workforce demands have affected the hospitality industry the most, and if we could get people back to work, it would help. Some hotels are having to close down rooms and can't sell them because they don't have enough housekeeping to keep them clean. The economy is great, but could be even better. But I am optimistic about the third and fourth quarter, and right now, business is wonderful."

"For us, normal is back. Festivals are back, concerts are back, there are no more restrictions on gatherings."

TUPELO • Mayoral candidates Todd Jordan and Victor Fleitas will detail their visions for the future of Tupelo when they meet on the stage tonight for a debate hosted by the Daily Journal.

The event begins 6 p.m. at the Link Centre concert hall in Tupelo. Jordan, a Republican, and Fleitas, a Democrat, will answer questions from Daily Journal reporter Caleb Bedillion, who will serve as the event's moderator.

The event auditorium will open at 5:30 p.m. The program is free to attend. Seating, however, is limited to about 100 people and will be available on a first-come-first-serve basis.

The Link Centre requests that those attending wear masks until seated, but masking is optional once seated.

A livestream of the event will also be available at ww.djournal.com, and on various social media platforms.

Tonight's debate comes two weeks before the June 8 general election. With incumbent Mayor Jason Shelton not seeking a third term, the election will determine who occupies the city’s top elected office for the next four years.

“We are excited that both candidates have agreed to stand before voters and discuss the issues facing the city and the next administration. It says a great deal about both men that they are not shying away from this opportunity,” Daily Journal executive editor Sam R. Hall said when the debate was announced. “We look forward to a lively but respectful exchange of ideas.”

Jordan, who works in real estate, is currently serving is his first term on the Lee County Board of Supervisors. A Tupelo native, he previously defeated Republican Markel Whittington in a mayoral GOP primary.

A son of Cuban and Puerto Rican immigrants, Fleitas is an attorney who has practiced law in Tupelo since 1995. He is making his first run for public office.

Jordan’s campaign has sought to contrast the GOP candidate with the outgoing Democratic mayor, even as Jordan charts a rapid rise through local politics. Shelton has seen his once broadly bipartisan support fray, and Republican strategists hope that bodes well for Jordan.

Fleitas, however, is hoping voters still prioritize a pragmatic, policy-oriented campaign over party identification, and that his vision of building an effective local government that improves the lives of everyone will win him a shot from voters.

TUPELO • Milam Elementary School will have a new principal next year.

The Tupelo School District Board of Trustees has named Terry Harbin as the school's new principal. They made the announcement following a special called meeting on Monday.

Harbin previously taught fifth grade math at Milam and serving as an assistant principal at New Albany Elementary. He was Lawndale’s principal from 2006 to 2012.

He has also worked in higher education, serving as adjunct professor at the University of Mississippi from 2010 to 2016 and as the Administration & Supervision Program Coordinator at Delta State University from 2012 and 2015.

In 2008, Harbin became the fourth TPSD principal to be named Mississippi’s Administrator of the Year.

Harbin, a 1980 graduate of Tupelo High School, will return to his home district after spending four years as principal at Itawamba Attendance Center, where he guided the school to an “A” rating.

He and his wife, Angela, have been married since 1987. Their two children, Peyton and Sidney, are both Tupelo High School graduates.

In a press release, Harbin said he's eager to return to Tupelo.

"I’m very excited to be returning home to my blue and gold roots," he said.