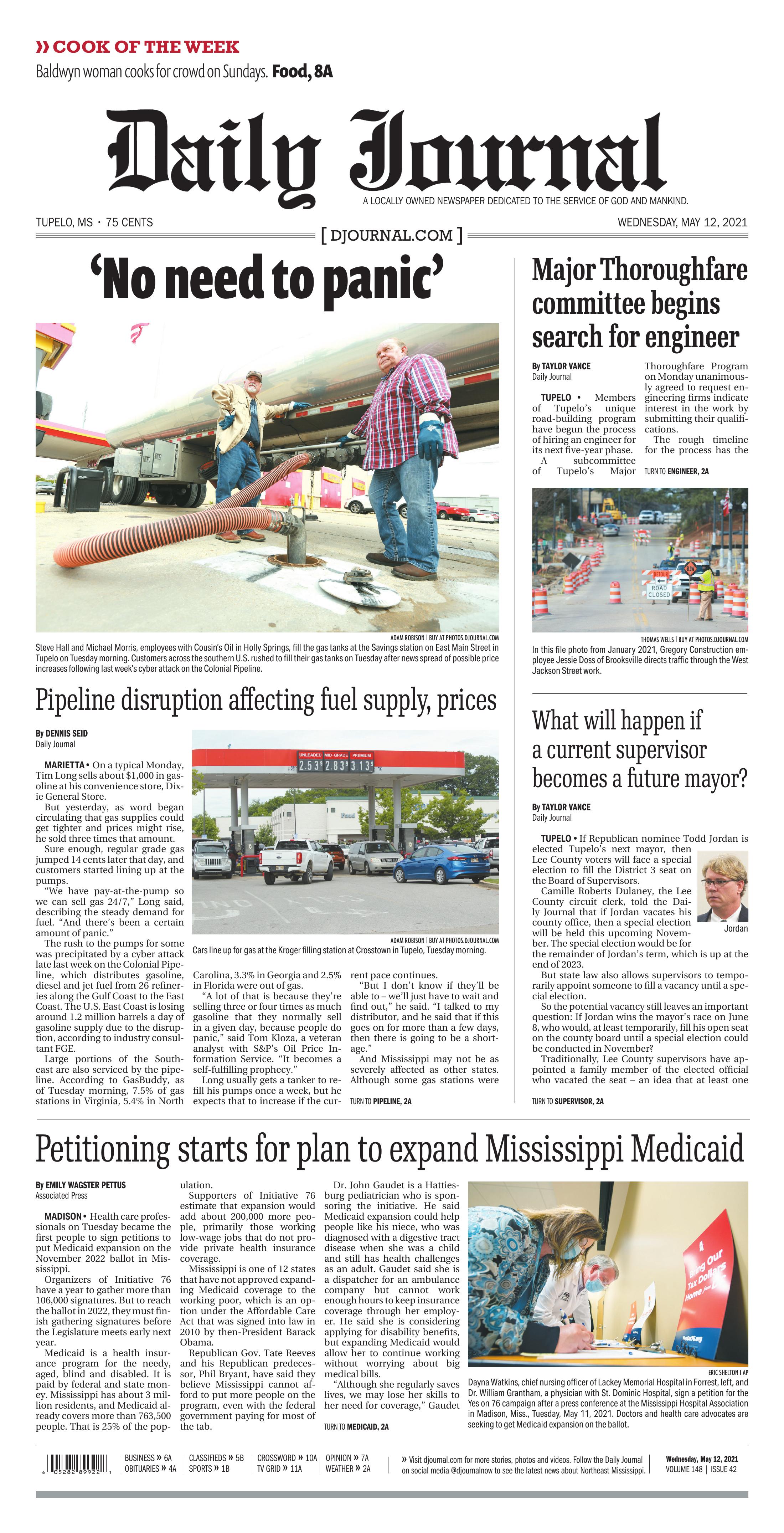 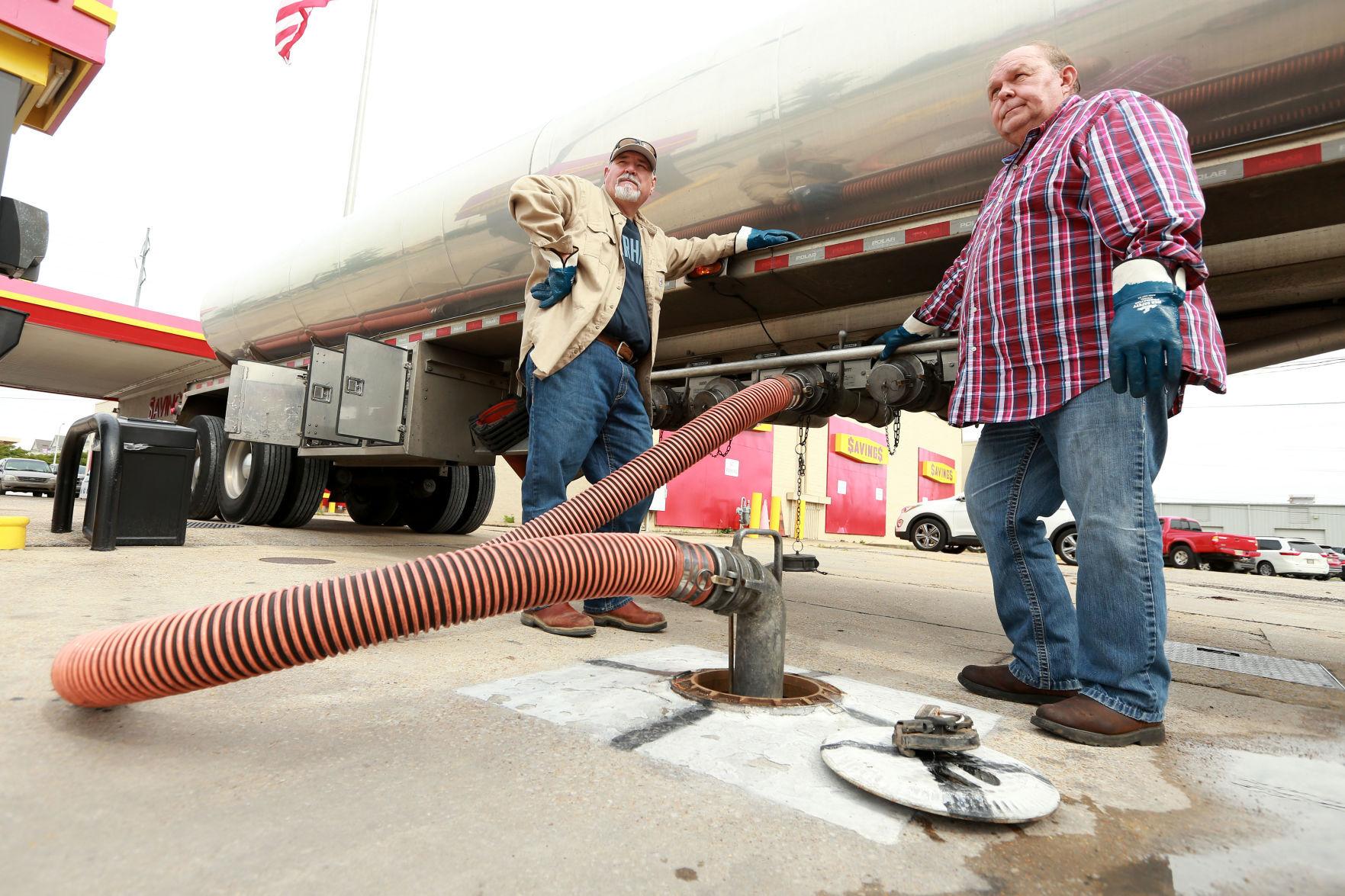 Steve Hall and Michael Morris, employees with Cousin's Oil in Holly Springs, fill the gas tanks at the Savings station on East Main Street in Tupelo on Tuesday morning. Customers across the southern U.S. rushed to fill their gas tanks on Tuesday after news spread of possible price increases following last week's cyber attack on the Colonial Pipeline. 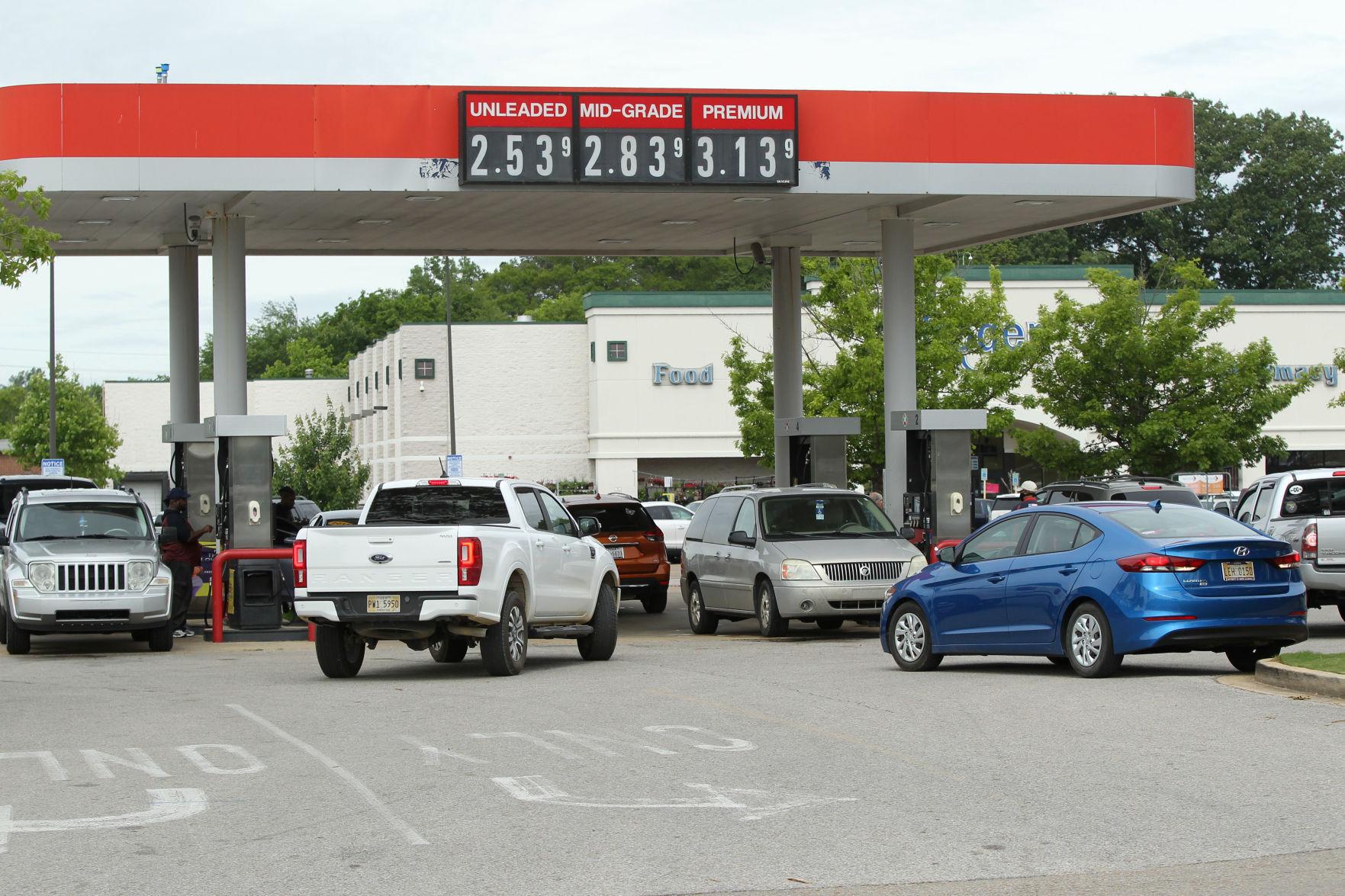 Cars line up for gas at the Kroger station at Crosstown in Tupelo Tuesday morning.

Dayna Watkins, chief nursing officer of Lackey Memorial Hospital in Forrest, left, and Dr. William Grantham, a physician with St. Dominic Hospital, sign a petition for the Yes on 76 campaign after a press conference at the Mississippi Hospital Association in Madison, Miss., Tuesday, May 11, 2021. Doctors and health care advocates are seeking to get Medicaid expansion on the ballot.

Organizers of Initiative 76 have a year to gather more than 106,000 signatures. But to reach the ballot in 2022, they must finish gathering signatures before the Legislature meets early next year.

Medicaid is a health insurance program for the needy, aged, blind and disabled. It is paid by federal and state money. Mississippi has about 3 million residents, and Medicaid already covers more than 763,500 people. That is 25% of the population.

Supporters of Initiative 76 estimate that expansion would add about 200,000 more people, primarily those working low-wage jobs that do not provide private health insurance coverage.

Mississippi is one of 12 states that have not approved expanding Medicaid coverage to the working poor, which is an option under the Affordable Care Act that was signed into law in 2010 by then-President Barack Obama.

Republican Gov. Tate Reeves and his Republican predecessor, Phil Bryant, have said they believe Mississippi cannot afford to put more people on the program, even with the federal government paying for most of the tab.

Dr. John Gaudet is a Hattiesburg pediatrician who is sponsoring the initiative. He said Medicaid expansion could help people like his niece, who was diagnosed with a digestive tract disease when she was a child and still has health challenges as an adult. Gaudet said she is a dispatcher for an ambulance company but cannot work enough hours to keep insurance coverage through her employer. He said she is considering applying for disability benefits, but expanding Medicaid would allow her to continue working without worrying about big medical bills.

"Although she regularly saves lives, we may lose her skills to her need for coverage," Gaudet said during a news conference Tuesday.

Amory resident Jonathan Smith, 35, said he hopes he would become eligible for Medicaid coverage if the program is expanded. Smith said he was working as a forklift operator about four years ago when he began having seizures. Doctors found he had cancer of the nervous system. Smith said that about the time he had a brain tumor removed, his employer switched insurance plans in early 2018 and he was left without coverage. He said he has been unable to work because seizures have continued, and he remains uninsured. He said family members have helped him pay some bills.

"There's no way that I could pay for these thousands upon thousands of dollars worth of bills," said Smith, the father children who are 1, 5, 7 and 8 years old.

Tim Moore, president and CEO of the Mississippi Hospital Association, said Mississippi has been turning down billions of federal dollars that could keep hospitals and clinics open. He said half of the rural hospitals in the state are in financial jeopardy.

Because Mississippi is one of the poorest states in the nation, it receives the most generous portions of federal funding for Medicaid. The federal government currently pays 84.5% of Medicaid expenses in Mississippi. The next-largest federal share goes to West Virginia, at nearly 81%.

Under expansion, the federal government would pay a higher share of the cost.

If supporters of Initiative 76 gather enough signatures, legislators will have a chance to put an alternate proposal dealing with the same subject on the same ballot. That could confuse some voters who would have to choose between competing ideas over whether to expand Medicaid to people who work in jobs that provide modest pay but do not provide private health insurance.

TUPELO • Members of Tupelo’s unique road-building program have begun the process of hiring an engineer for its next five-year phase.

A subcommittee of Tupelo's Major Thoroughfare Program on Monday unanimously agreed to request engineering firms indicate interest in the work by submitting their qualifications.

The rough timeline for the process has the committee that oversees the Thoroughfare program advertising for submissions around May 20, then the engineer subcommittee will review and rate the submissions at its June meeting.

Afterward, the committee will make a recommendation to the city council about which engineering firm should work for the program for the next five years.

“We know our group of firms that will be interested in this,” Dennis Bonds, the city engineer, said at the meeting. “If the drafts (of the request for proposals) are agreeable to the committee, we can get the ball rolling.”

The engineer for the program serves a vital role by working with contractors and construction companies, aiding the committee members and the city engineer in giving general advice and helping with the bidding process.

By the subcommittee’s current timeline, its recommendation of which firm should be hired will occur around the same time a new city council and a new mayor will take office, on July 1.

In Tupelo’s form of government, the City Council controls the finances. This means councilmembers will have to formally vote to approve or reject whatever recommendation the Thoroughfare committee brings.

Although hiring a firm has been a smooth process for the past two Thoroughfare phases, it hasn’t always been that way.

In 2006, the Tupelo City Council overruled the Thoroughfare committee's recommendation to hire Engineering Solutions Inc. Instead, the council voted to award the contract to Cook Coggins Engineers.

Then-Mayor Ed Neelly vetoed the council’s decision. As a compromise, the council and mayor agreed that two engineering forms would work for the Thoroughfare committee.

Jon Milstead, a member of the Thoroughfare committee, asked at Monday's meeting if the election of a new mayor and at least three new council members would change the process for hiring an engineering firm for the next phase and if there was any need for the committee members to try and avoid any of the controversial actions of 2006.

“We’re independent of the council, so typically we just keep trucking along,” Ernie Joyner, a member of the Thoroughfare committee said. Joyner added that the 2006 controversy was an anomaly and didn’t believe such contention would arise this time.

Local
Now that Todd Jordan has been elected Tupelo’s next mayor, here's what happens to his supervisor seat.
Adam Robison | BUY AT PHOTOS.DJOURNAL.COM

Todd Jordan receives a hug from his wife Christy, right, after winning the Republican primary on April 6.

Todd Jordan on Jan. 2020 takes the oath office to become the the new District 3 supervisor for Lee County with his wife, Christy, right, holding a Bible.

TUPELO • If Republican nominee Todd Jordan is elected Tupelo’s next mayor, then Lee County voters will face a special election to fill the District 3 seat on the Board of Supervisors.

Camille Roberts Dulaney, the Lee County circuit clerk, told the Daily Journal that if Jordan vacates his county office, then a special election will be held this upcoming November. The special election would be for the remainder of Jordan's term, which is up at the end of 2023.

But state law also allows supervisors to temporarily appoint someone to fill a vacancy until a special election.

So the potential vacancy still leaves an important question: If Jordan wins the mayor's race on June 8, who would, at least temporarily, fill his open seat on the county board until a special election could be conducted in November?

Traditionally, Lee County supervisors have appointed a family member of the elected official who vacated the seat — an idea that at least one supervisor is open to continuing.

“I always try to appoint a family member,” District 1 Supervisor Phil Morgan said. “A spouse or a child.”

Neither of Jordan’s children meet the age requirement to serve, so Morgan said that he’s receptive to the idea of appointing Todd Jordan’s wife, Christy Jordan, to the District 3 seat if it becomes vacant.

District 4 Supervisor Tommie Lee Ivy, the only Democrat on the board and currently the longest serving member of the board, said that he had no objections to Christy Jordan being appointed to the board, but he believes it’s too early to make any kind of informal decision.

“I hate to make a decision on that right now,” Ivy said. “I’ve just got to wait and see what will happen in the election.”

Neither District 2 Supervisor Mike Smith nor District 5 Supervisor Billy Joe Holland returned requests for comment about who they would support to fill Todd Jordan's seat if it becomes vacant.

Christy Jordan said in a statement to the Daily Journal that should her husband win the mayoral race, she would consider temporarily serving on the county board and that she could “carry out his vision.”

“I know the importance of listening to constituents and putting in the effort to make District 3 a safe and prosperous place to live,” Christy Jordan said. “One thing that I’ve learned through watching my husband is that he is proactive and the citizens take pride in this kind of leadership.”

Christy Jordan did not say if she would consider running in a special election to complete her husband's term as a county supervisor.

Jordan is currently an administrator in the Tupelo Public School District, where she has been employed for nearly 25 years. She has also worked for the American Association of State Highway and Transportation Officials and the Mississippi Department of Transportation as a math and science trainer.

The general election for Tupelo’s municipal election is June 8. The winner of the mayoral race — either Jordan or his Democratic opponent, Victor Fleitas — will take office on July 1.

Related
Todd Jordan declines to participate in Jason Shelton's state of the city events
By TAYLOR VANCE Daily Journal
May 5, 2021

TUPELO • Todd Jordan, the Republican nominee for mayor, will not attend any of outgoing Mayor Jason Shelton’s state of the city events.