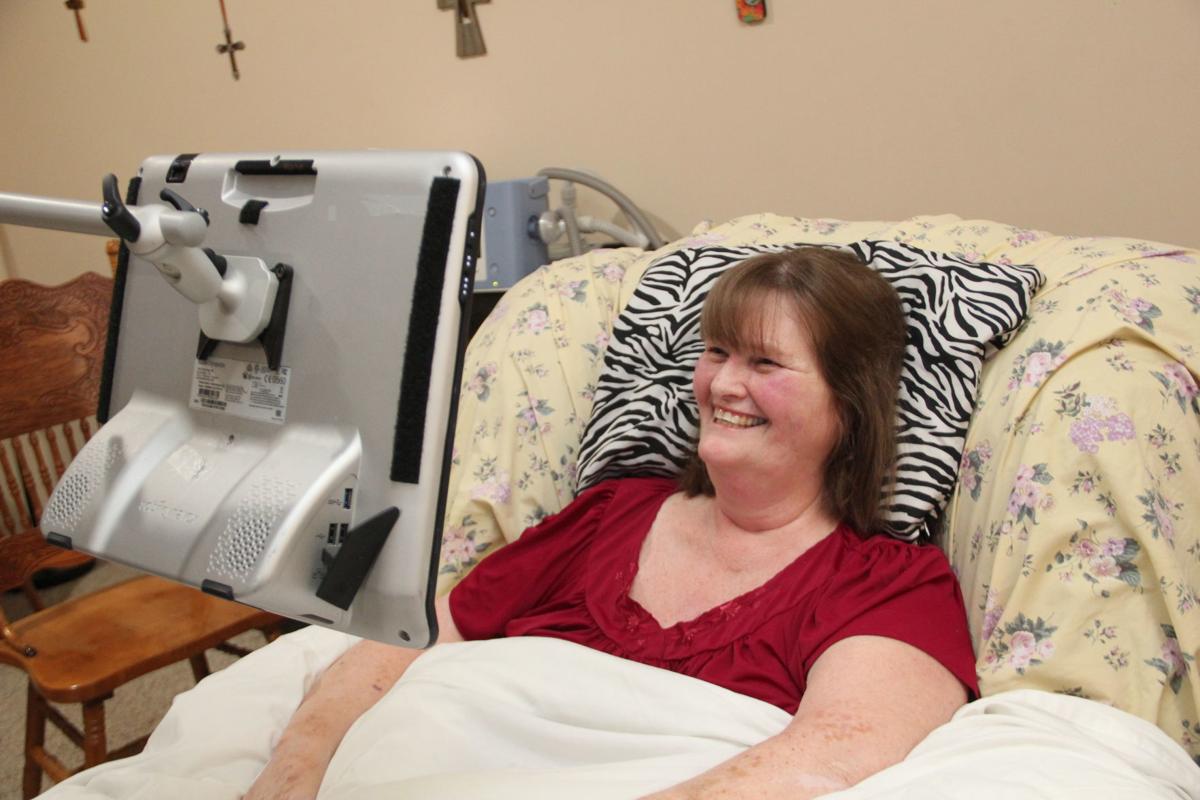 Diagnosed with the neuro-degenerative disease ALS in 2016, Sue Walton of Ballardsville has lost her mobility and the ability to speak. She communicates through a device that tracks eye movement to write text, which can then be converted into spoken dialogue. 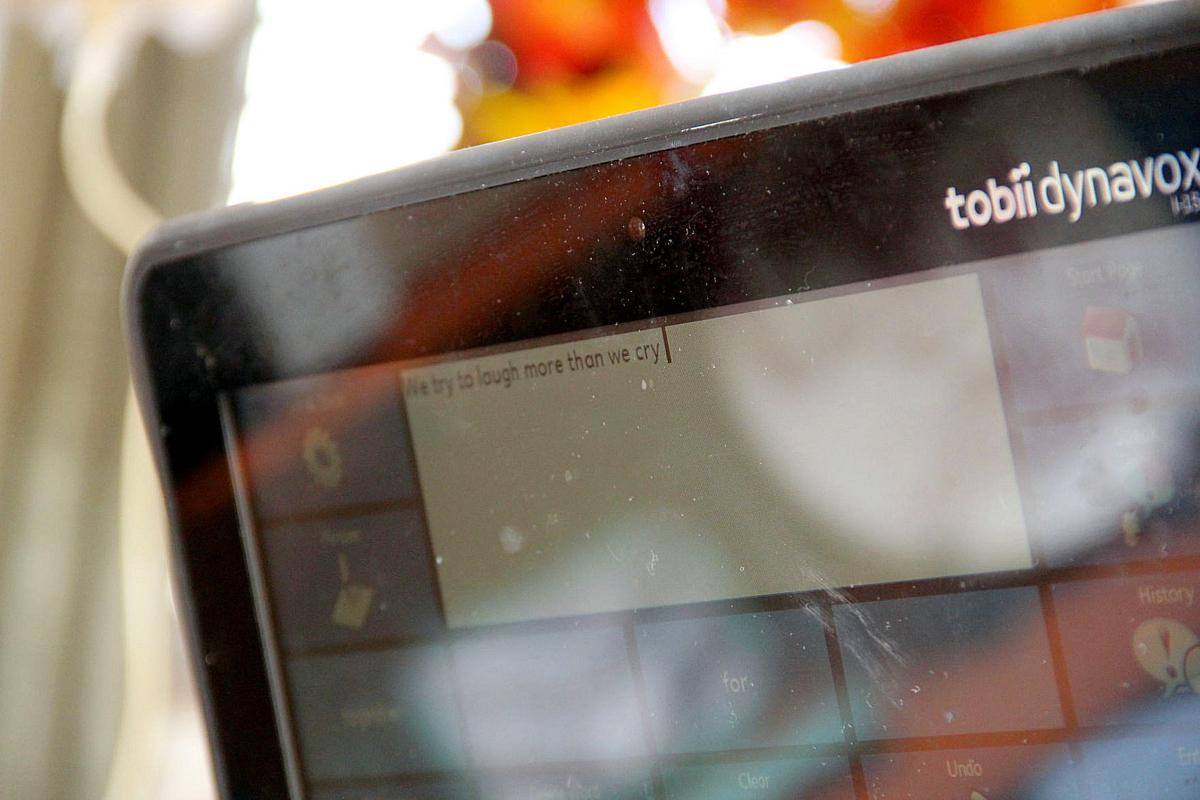 Walton relies on an device which converts eye movement to text to communicate with family and friends. 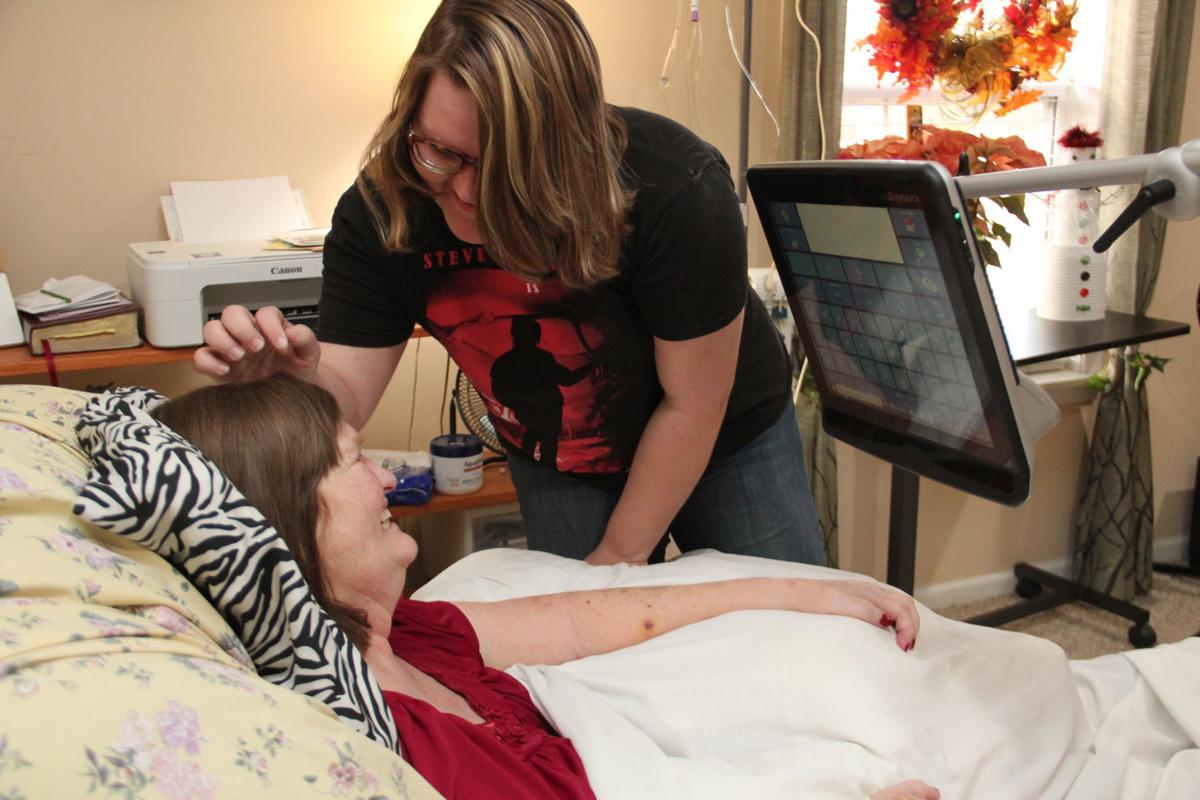 Walton smiles as her granddaughter, Olivia Daniels, fixes her hair. She said family has helped keep her spirits high. 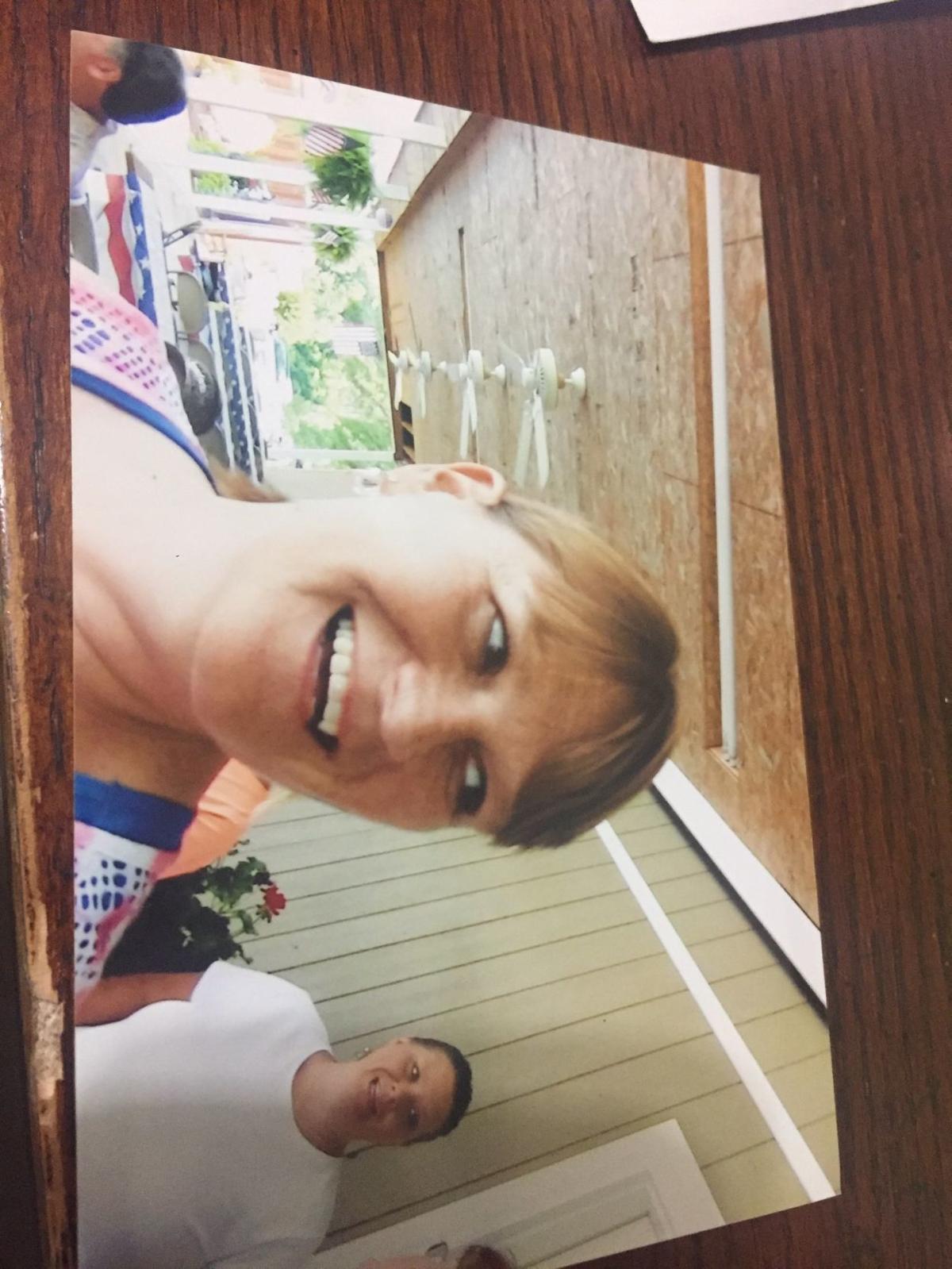 Prior to losing her mobility from ALS, a happy and active Sue Walton enjoys a family gathering at her home. Prior to her diagnosis, she enjoyed spending time with family and friends and her career as a nurse.

Diagnosed with the neuro-degenerative disease ALS in 2016, Sue Walton of Ballardsville has lost her mobility and the ability to speak. She communicates through a device that tracks eye movement to write text, which can then be converted into spoken dialogue.

Walton relies on an device which converts eye movement to text to communicate with family and friends.

Walton smiles as her granddaughter, Olivia Daniels, fixes her hair. She said family has helped keep her spirits high.

Prior to losing her mobility from ALS, a happy and active Sue Walton enjoys a family gathering at her home. Prior to her diagnosis, she enjoyed spending time with family and friends and her career as a nurse.

Sue Walton can be quite the prankster. For instance, she’s been known to flip the television channels while her family is immersed in a favorite flick at her Ballardsville home, wreaking brief but hilarious chaos.

She smiles big when they call her out over it.

In the average household, pulling off such a prank would be as simple reaching over to grab the remote and pressing a few buttons. But the Walton household is anything but average, and nothing Sue Walton does can ever be simple.

In June 2016, Walton was officially diagnosed with Amyotrophic Lateral Sclerosis (ALS), commonly known as Lou Gehrig’s Disease, a neurodegenerative disease that attacks the motor neurons responsible for the use of voluntary muscles. It progresses rapidly causing severe weakness that develops into complete immobility and leaves the patient unable to communicate.

There is no known cause. Or cure.

Those affected by the disease suffer from no intellectual impairment. They are, in essence, fully functional people trapped in bodies that will not work.

Through advances in technology, barriers that once stood in the way of ALS patients communicating have been torn down. Although the 20-year career registered nurse has long since lost the ability to move her limbs, to speak, or to express herself the ways she used to, Walton can communicate with the aid of Tobii, a device that uses eye tracking and eye control computer technology to help her speak. By carefully selecting letters and common words on a screen using her eyes, she can convey her thoughts and needs to her family and friends. She can even change the television.

Outside of the use of Tobii, when it comes to simple questions like “are you comfortable?” she simply blinks once for yes, twice for no.

In response to this interview, Walton wrote more than 1,500 words using the device. Letter by letter, with few common words, she conveyed how ALS has affected her life, her family and has fueled her desire to advocate on behalf of ALS patients who don’t have the same support system she has.

“My Tobii means everything to me, it is my lifeline,” she wrote, her eyes flicking from one letter to the next. “I think without it I would get so frustrated and be more likely to give up. It is so sad that more people don’t have the opportunity to have one. When I have been in the hospital, the doctors, nurses, and therapists were amazed, and only one person had ever seen this eye gaze technology before, and her husband has ALS.”

As Walton completes each sentence, Tobii reads it aloud … typically is a calm female voice Walton selected. Once, in a bit of patented tomfoolery, she switched it over to a deep male voice and told her husband, to “kiss me goodnight baby.”

“I can’t imagine one day without it,” she wrote/said. “Not being able to tell someone what I need, although they have gotten pretty good at understanding my grunts and reading my mind. If Smiley [her husband, Jerry] was here, he would tell you most definitely. I don’t have any trouble letting him know how I feel.”

Although she was officially diagnosed at Vanderbilt, Walton’s initial diagnoses came just a few months prior in Tupelo. Walton wrote she already knew she had the disease before her first visit to the physician. With her nursing background, along with in-depth research of her symptoms, she ruled out everything but ALS.

“In August 2015, my right thumb started cramping, and I was so fatigued. By November, I was losing fine motor skills in my right hand and having fasciculations,” she typed. “I was also losing strength in my right arm. I called my doctor, and he set me up with a neurologist, which wasn’t until January.”

Walton said she was fortunate to have an ALS representative available through state funding when she was first diagnosed. The rep came to her home and answered many of the couples questions and provided them information about the equipment they would likely need as the disease progressed. That program has since been cut and representatives are no longer available. For someone who can’t speak, Walton is very vocal about her concern for lack of support for ALS patients like herself.

“There is a lack of support in Mississippi for ALS,” she wrote. “There are no support groups or loan closets or clinics. The closest clinics are in Memphis, Birmingham, and Nashville. Clinics are so important because they can help you stay ahead of this horrible disease and help you get the equipment needed. The equipment is so expensive, and the insurance companies require tons of paperwork to show a justification. It would be impossible to get the equipment on your own. Our medical supply company has been so helpful too.”

Using the rep’s advice, the Waltons made handicap renovations to their home. Friends and family held fundraisers to make the project possible. The cost of the equipment Walton needs to stay alive runs well into tens of thousands of dollars. No working class family could possibly shoulder the financial burden of ALS on their own, Walton said.

“The lack of resources available to an ALS patient who has worked all their lives is terrible,” she said. “There are no services to help relieve the caregivers, no services to help modify your home, no services to help with the supplies of an ALS patient. And these resources are out there, but we were told over and over that we made too much to get assistance. Nobody takes into account that you’ve gone from a two-income family to a one-income family and the bills didn’t go down. They went up. That’s why we are so blessed to have so many friends and family to stay with me so my husband can keep working. If he had to quit and take care of me, we would lose everything.”

Walton said one of the biggest challenges since being completely debilitated is having someone do everything for her.

“I was always the one who took care of everyone else, as a wife, mother, grandmother (Nana), and even in my professional life being an R.N. I loved it,” she said. “Now, I can’t move anything except my eyes and my head from side to side and have to ask for even the simplest of things to be done, like brushing my hair and teeth.”

The lack of physical ability hasn’t stopped Walton from advocating on her behalf and others who suffer from the debilitating disease. After a recent visit to the emergency room, she drafted a thousand-word letter to North Mississippi Medical Center describing what she deems as the “less than professional treatment” of an ALS patient. In it, she addressed medical protocol and the lack thereof for someone in her condition.

She also addressed her concern about the hospital’s status as a Medicare Accountable Care Organization (ACO), stating it was a term to which she had not been introduced until that visit. ACO is a program set in place “to ensure patients get the right care at the right time while avoiding unnecessary duplication of services” according to the Center for Medicare and Medicaid Services. The ACO shares in the savings it achieves for the Medicare program. Walton’s primary insurance is through a private company, with Medicare only acting as a secondary insurance.

She ended her letter by writing, “I am angry about the lack of care I received, but more than that, I am saddened to see where health care is heading. Is it not enough that ALS patients suffer from a terminal illness with no treatment or cure, and now we have to suffer from inadequate health care, too? What’s next, euthanasia?”

When asked if these situations cause her stress and great frustration, she blinked once.

Sue Walton’s attitude makes the Walton household anything but average. ALS may have taken her ability to move about or to reach her arms around her grandchildren, but it has not dampened her spirits nor stolen her inner strength.

She said her faith in God keeps her positive.

She also credits the strong support system she has with family and friends.

“They visit, pick up medicine, get our groceries and stay with me so my husband can keep working,” she said. “They do fun stuff too like throw the best birthday parties ever, help me pull pranks on my loved ones, take me visiting all over the community while my husband is working, and so many other fun things. The ladies from church clean my house and bring meals when they come.”

They even cry together from time to time she wrote, but they try not to dwell on the negative.

In June, Walton has plans to visit Yellowstone. Her husband purchased a used passenger bus and redesigned the rig to house a hospital bed. Their family and friends will join them on their adventurous endeavor.

ALS may have taken Walton’s ability to move, but not her mobility.

“We still go on vacations and plan for the future,” she said.

When ask if she’s looking forward to the trip, Walton smiled, then blinked once.