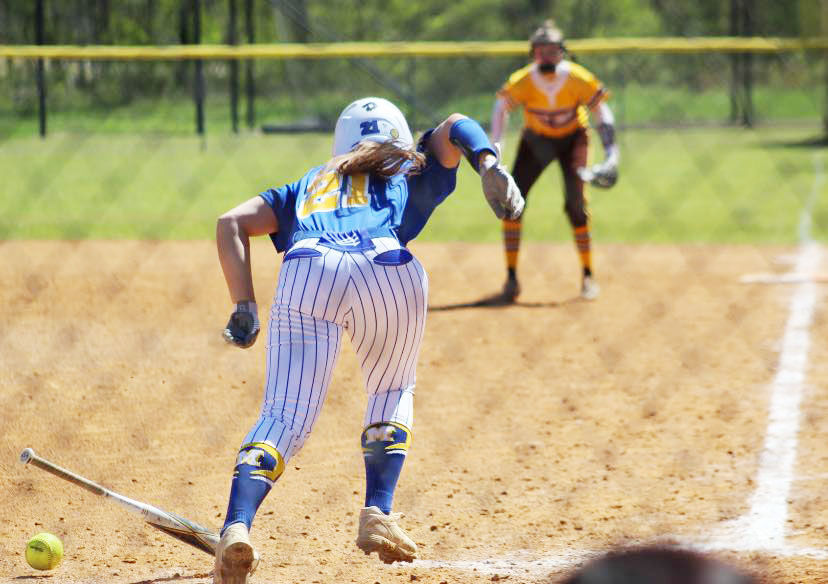 Mantachie's Madison Jones lays down a fantastic bunt during the Lady Mustangs division win over East Union Saturday in Mantachie. 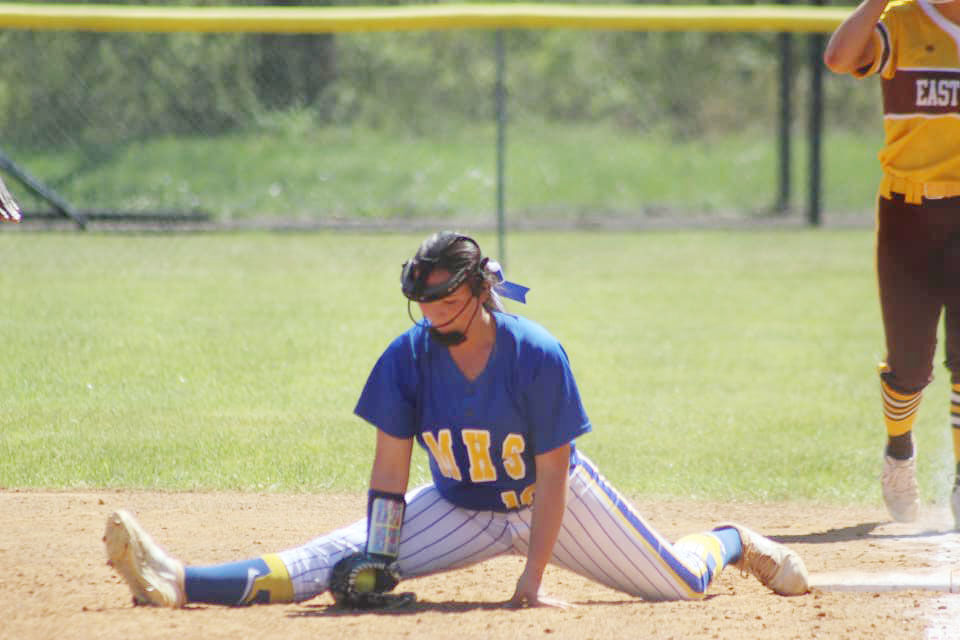 First baseman Hanna Gillean holds the bag while stretching for the ball during the Lady Mustangs win Saturday.

Mantachie's Madison Jones lays down a fantastic bunt during the Lady Mustangs division win over East Union Saturday in Mantachie.

First baseman Hanna Gillean holds the bag while stretching for the ball during the Lady Mustangs win Saturday.

It was a busy week of division play for the Lady Mustangs fastpitch team, that started with a three hour tour to Tate county for a double-header against Strayhorn’s herd of Mustangs.

Mantachie made quick work of their adversaries in each game, prevailing handily 14-1 and 11-1 respectively. Six of the nine Lady Mustangs starters tallied both multiple hits and a run batted in across the two contests, including home runs by junior Hanna Gillean and Lillianna Cates.

Ramsey Montgomery pitched most of the way, surrendering just a single hit in each game, while striking out 20. Gillean entered in relief, allowing two hits and picking up a strikeout of her own to accompany her monster day at the plate where she drove in five runs on three hits.

Following the blowout wins, weather concerns pushed the showdown of the season against the Lady Urchins, originally scheduled for Tuesday, into Thursday at Ellistown, where things started off the rails and pretty much stayed in that lane all night.

The Lady Mustangs drew first blood against their bitter rivals in the top of the first after Gillean reached on a fielder’s choice and scored two batters later after a double by Montgomery and sacrifice fly by Cates.

East Union answered in the home half of the inning, leading off with a single, followed by consecutive strikeouts and back-to-back singles, scoring a pair of runners to take the lead 2-1, before Montgomery locked in and retired the side. After that rocky frame, she would only surrender two more hits across the next six innings of work.

Mantachie went quietly in the second inning, but when the top of the order rolled around in the third, so too came the thunder, with three consecutive hits that resulted in two runs. Senior Lynsey Barber walked, Gillean singled, and Montgomery doubled them both in to reclaim a 3-2 lead that they would not relinquish.

In the circle, Montgomery retired 15 of the next 17 batters, fanning 13 total to go along with her two run,five hit line, and if that were not enough she belted her fourth home run of the season in the top of the seventh inning to make it 5-2.

One of the few hard hit balls by the Urchins was vacuumed up on a fantastic running catch in the gap by senior Madison Jones, who had herself a night at the plate, notching a pair of hits including a double off the top of the wall and an RBI single in the seventh to drive in the Lady Mustangs sixth and final run to steal the 6-2 win on the road.

The rematch commenced on Saturday afternoon in the rolling pastures of Itawamba county, and despite history not being on the home team’s side, Mantachie was able to bear down and throttle the Urchins from the first pitch.

Barber and Gillean led off yet again with consecutive hits, and a hard hit ball by Montgomery to third base scored the first of the two while Cates’ sacrifice fly in the ensuing at-bat plated the other.

In the third inning, the “tandem at the top” one-upped themselves, slapping back-to-back doubles this time around, with Gillean scoring Barber and a double by Cates two batters later again scored Gillean.

After a single by Jones put runners on the corners, Mantachie netted another score after consecutive hit batters loaded the bases and walked in a run, making it 5-0. Meanwhile, East Union found no success against the overpowering Montgomery in the circle, totaling only three hits the entire day while striking out another 11 times.

What was left of the dam gave-way in the fourth inning as six-straight Lady 'Stangs reached base safely, ignited once more by Barber and Gillean, en route to a seven run frame that included a triple by Montgomery, an RBI single by Jones, three East Union errors, and one of the most interesting stats of the season: eighth-grader Campbell Guin getting beaned for the second time in the game and the tenth time this season.

When the dust finally settled, Urchins’ star pitcher Emily Coggin had been pulled in favor of seventh-grader Josie Mae Bell, who was able to stop the bleeding, albeit much too late. A quick three-up-three-down top of the fifth for Montgomery, taking just 14 pitches, closed out the contest early 12-0 via the mercy rule.

Anytime a team goes (4-0) it constitutes a good week, but the two wins at the back half were huge, solidifying Mantachie’s grasp on first place in the division, and providing a huge morale boost for a youthful squad still learning on the fly.

Coincidentally, only three current Lady Mustangs (Barber, Jones, and Gillean) made appearances in the series upset over East Union five years ago for a North Half Championship, and not surprisingly those three were driving forces in this two game onslaught on both sides of the ball.

The series had plenty of good stats that bode well for Mantachie moving forward. The first four hitters in the lineup combined to go (21-28) at the plate for a .750 batting average, and against one of the area’s top pitchers in Coggin.

Montgomery painted a masterpiece in the circle racking up 24 strikeouts in 12 innings, holding opposing hitters to a measly .170 average, clicking with Barber at catcher and veteran pitching coach Kelly Guin.

The wins push the Mustangs to (10-3-2) overall and a perfect (6-0) in division play. They will play New Site this next week before traveling to the annual Morris Hunter Memorial tournament in Southaven next weekend.