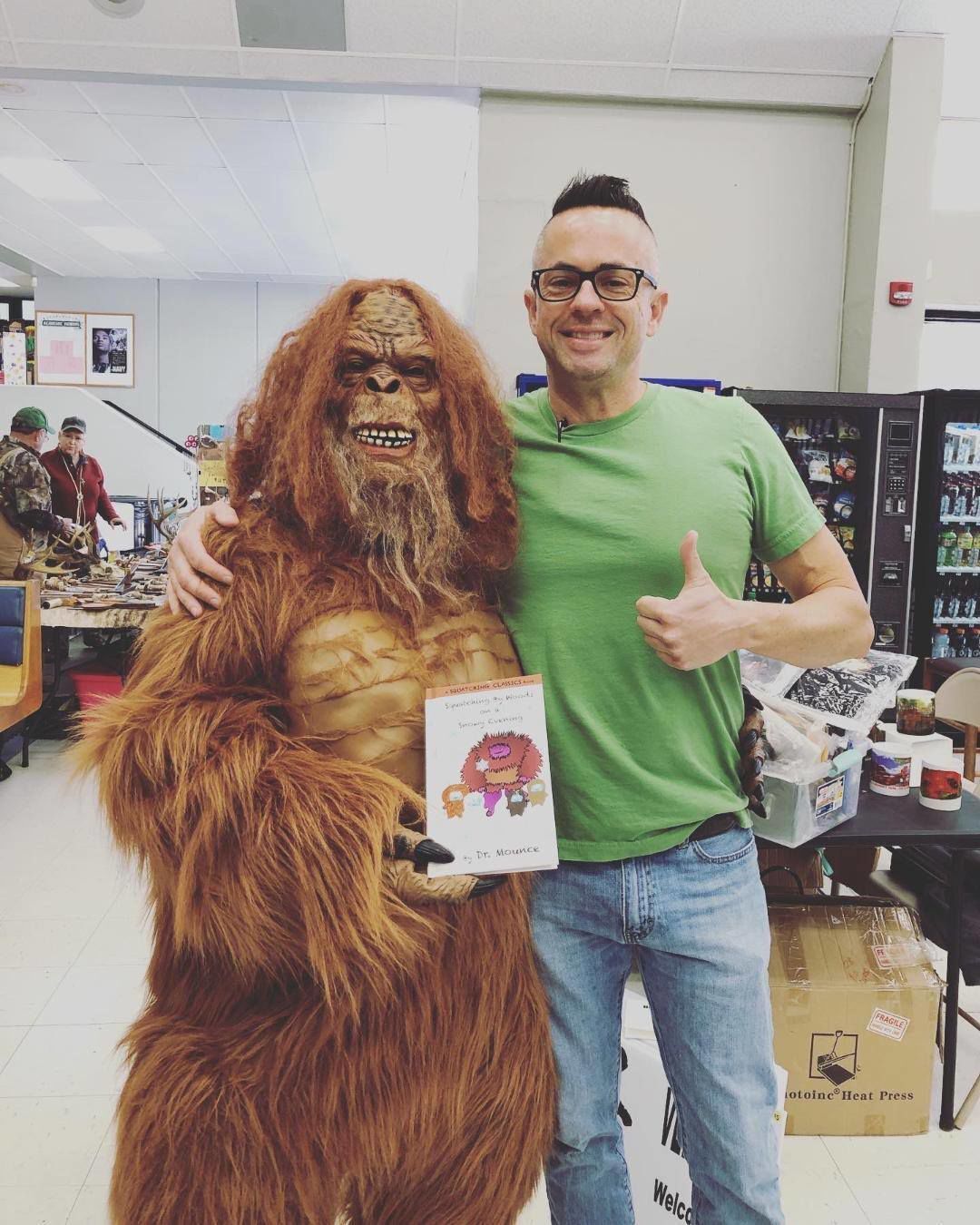 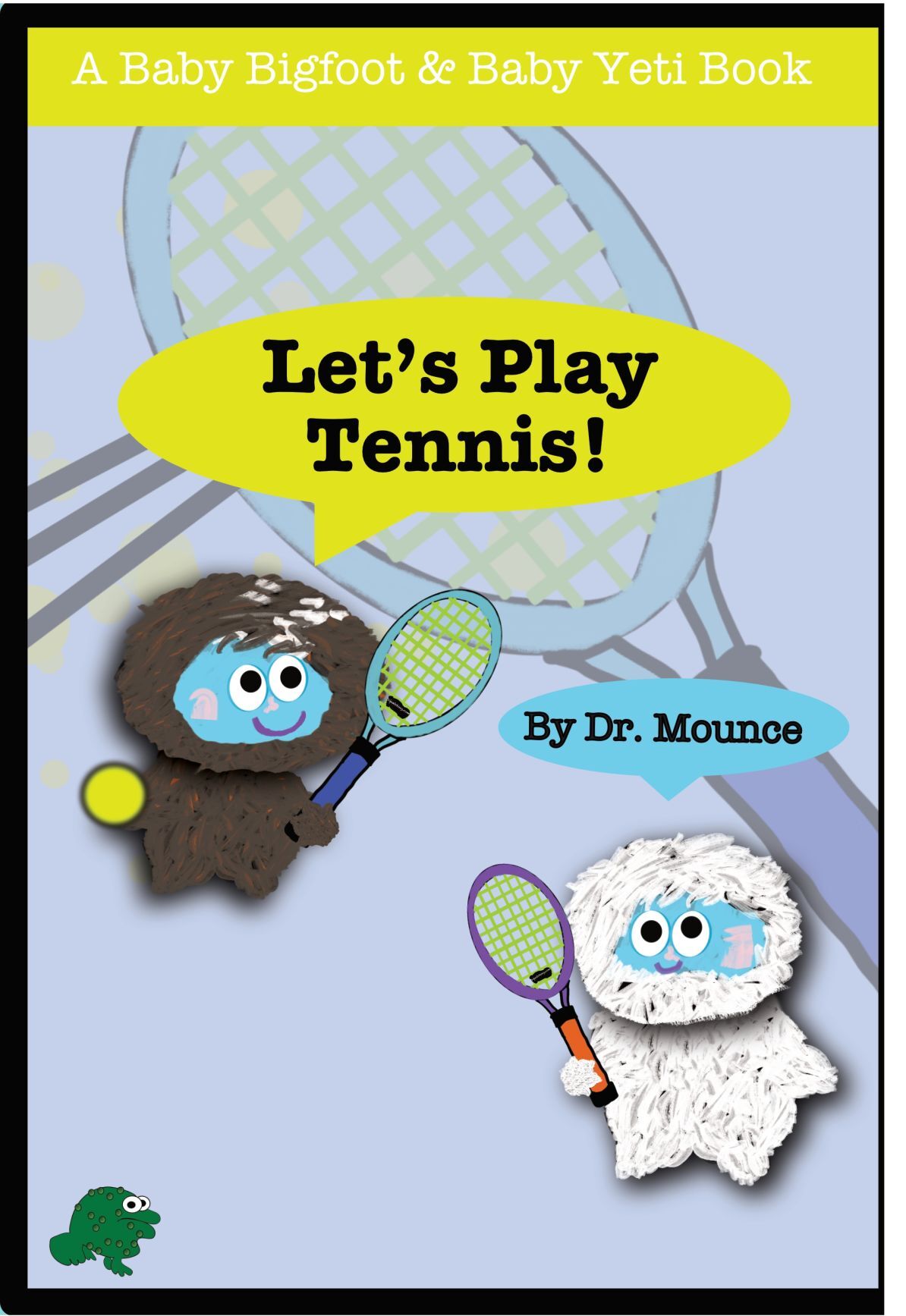 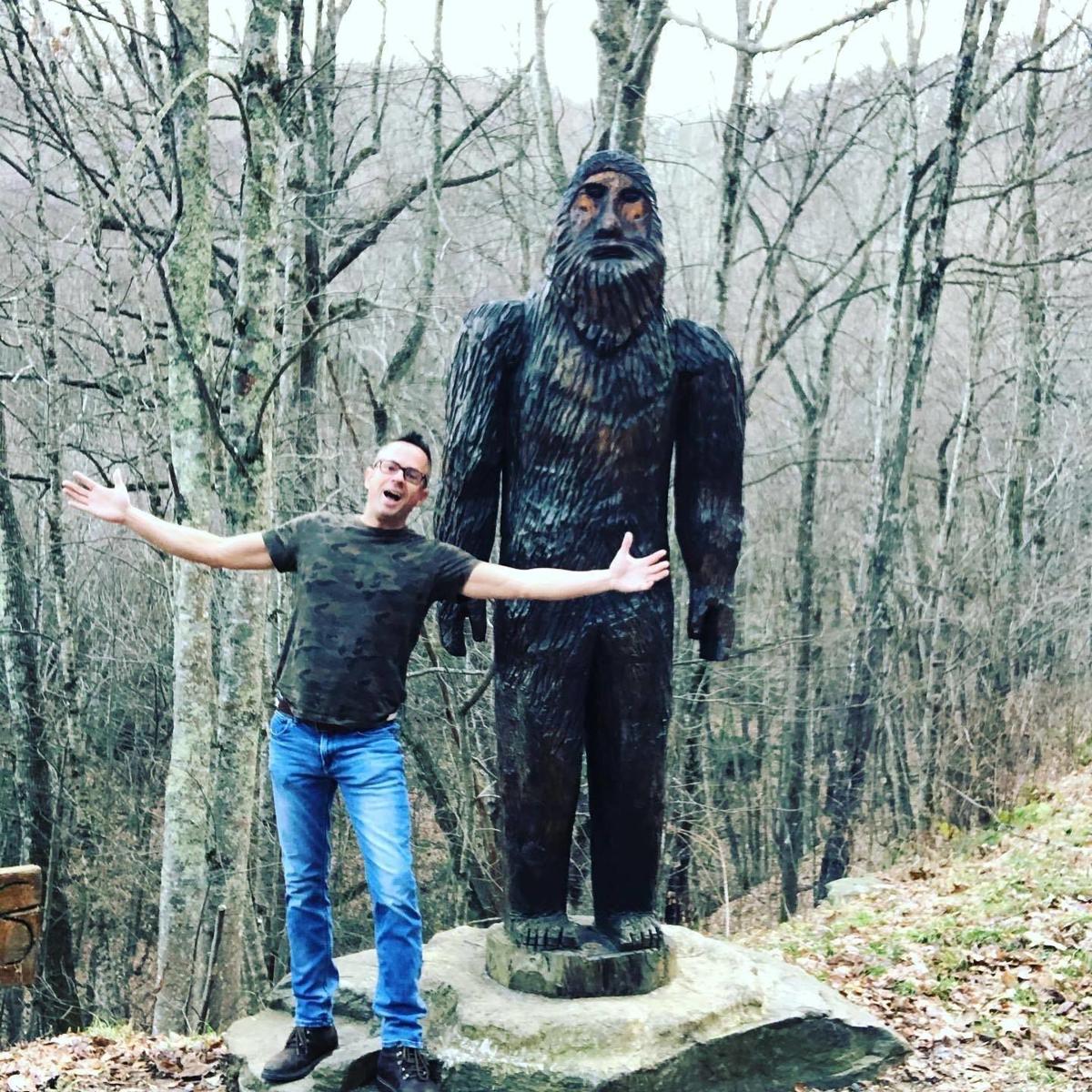 Mounce recently went on what he described as a “personal Bigfoot journey,” dropping by several Bigfoot hot spots throughout the south. He plans to do more Bigfoot hunting in the future.

Mounce recently went on what he described as a “personal Bigfoot journey,” dropping by several Bigfoot hot spots throughout the south. He plans to do more Bigfoot hunting in the future.

Former Mantachie mathematics teacher Dr. Timothy Mounce is pretty sure he believes in Bigfoot. And aliens. And ghosts. Gigantopithecus for certain.

He’s also pretty sure everybody else should maybe believe in those things, too. At least a little.

A Ph.D. and a college professor, Mounce believes curiosity is important. The world is vast and complicated. There’s a lot the people living on it have yet to learn about.

“I think it’s healthy and scientific to be skeptical, but to approach [anything] with an open mind,” he said.

Mounce recently published his second children’s book, “Let’s Play Tennis: A Baby Bigfoot & Baby Yeti Book,” under his semi-pseudonym, Dr. Mounce. The book tells the story of a group of friends – Baby Bigfoot, Baby Yeti, Baby Sasquatch and Baby Giganto – who are sent to the store to pick up avocados and sun-dried tomatoes. But it doesn’t take the crew long to get distracted by an impromptu game of tennis, and then for that impromptu game of tennis to be interrupted by confusion over the sport’s baffling (at least to outsiders) scoring system.

Written, illustrated and published by Mounce over a roughly nine-month period, the book is very much a reflection of its creator.

“Honestly, it’s quintessentially me. It’s got a little bit of all my different personalities in there,” he said. That includes a love for tennis and southern culture, humor and kids. And cryptids. Don’t forget the cryptids.

For those unfamiliar with the term, a cryptid is a creature claimed but never proved to exist. Think the Loch Ness Monster or Abominable Snowman, El Chupacabra or, of course, Bigfoot.

Born into a superstitious family on Halloween night, Mounce has had an interest in the spooky, the paranormal, the extraterrestrial and the crytozoological since he was a kid. He grew up in Pontotoc County on a diet of Stephen King and “Unsolved Mysteries,” arguably the scariest show ever created – at least to those of a certain age during its run.

Despite his family’s predilection for paranormal, they were also strongly religious. Mounce felt these two traits complimented each other well. The Bible is full of what could, to those not of the faith, be considered inexpiable. Paranormal. Even angels could be considered extraterrestrial.

“I always felt like my religious background supported my interest in all of this stuff,” he said. “It doesn’t for everybody, but for me it does. With the paranormal, with Bigfoot, with aliens, with UFOs.”

As he got older, Mounce fell in love with the late-night radio program “Coast to Coast A.M.” Founded in 1988 and originally hosted by Art Bell, the show has given voice to hundreds of guests who claim to have had any number of inexpiable encounters. Before every ghost hunter, Mothman witness and time traveler had his or her own blog or Facebook page, the show was the primary way people with ties to the enigmatic shared their stories with a wider audience.

Mounce ate it up.

The show, which still runs, has been such an influence on Mounce, the name of his micropublishing company, Coma Toast Tacos, is an anagram of its name.

In the early 90s, Mounce heard a story from a coworker about a close encounter with Possumhead Man. The guy claimed the creature almost killed him and his grandfather and brother during a fishing trip.

Even Mounce, who was drawn to such local legends, was skeptical.

Possumhead Man. Lives in the woods near Dumas, Mississippi. He’s got the head of a possum and the body of a man. It sounded preposterous, even for Mounce.

“I didn’t know exactly how to take that,” he said. “If somebody tells you a weird or strange story, on the face of it, you can’t take it seriously too much. It’s just one person.”

But many years later, Mounce was recalling the story of Possumhead Man to a friend when one of that friend’s coworkers said he knew of the legend and claimed to have himself survived an encounter with the creature. Years later again, during his stint teaching at Mantachie Attendance Center from 2002 to 2010, Mounce brought up the subject to fellow teacher Mark Neaves, who said he was familiar with local legend. Neaves, by the way, now co-hosts a podcast about cryptids with Mounce. The subject of their first episode: Possumhead Man.

“That just kind of blew my mind,” Mounce said. “It was probably spanning two decades there of many different people who all knew about this crypozoological legend. That just really blew my mind.”

Since then, Mounce’s interest in local legends, the cryptozoological, the unexplainable, has only grown. When he chose to try writing his first children’s book (a decision he credits to his two young children and the dozens upon dozens of children’s books he’d read to them), he naturally used his interest in Bigfoot and his ilk as inspiration.

The easiest way to write, he said, is to write about familiar things. Hence, cryptid children. The result was “Squatching by Woods on a Snowy Evening,” a semi-parody of the famous Robert Frost poem.

The promotion of that book, and now its followup, took Mounce deeper into the world of Bigfoot fanaticism, to conferences and festivals dedicated solely or partially to the creature. Some time back, Mounce attended a Bigfoot conference in North Carolina. While there, he took time to get to know some of the attendees and speak with a handful of locals about their Bigfoot encounters.

“I went out that first night to some local places,” he said. “Knocked a few back. Talked a little. I heard a lot of great stories.”

A few years back, Mounce went on what he described as a “personal Bigfoot journey,” stopping by Bigfoot hot spots, landmarks and museums on his way between North Carolina and Mississippi. In January, he traveled into North Carolina’s Uwharrie National Forest, considered a hotbed of Bigfoot activity, to do a little hunting of his own.

“It’s a very remote, isolated national park,” he said. “It’s huge. Plenty of room for anything out there.”

Although he didn’t have an experience on that trip, he’s looking forward to trying again.

Since penning his first book, Mounce has learned that, real or not, a creature like Bigfoot can serve a purpose. The hunt learn more about the creature, or even if it exists at all, cuts across all demographics: Faith, gender, hometown, race, economic status. None of that stuff matters among the members of the Bigfoot community. They all share a common fascination, and that brings them together.

“It’s a diverse group of people, but they’re very supportive of each other,” he said of the Bigfoot hunting community.

To Mounce, the members of the Bigfoot community inhabit an idealized world. One of unity and full of mystery, in which there are questions to which everyone is seeking answers together.

“How bad would it be if there was nothing that was weird and we did understand everything that there was?” Mounce asked.

He didn’t wait for an answer.

“I think that would be pretty boring.”