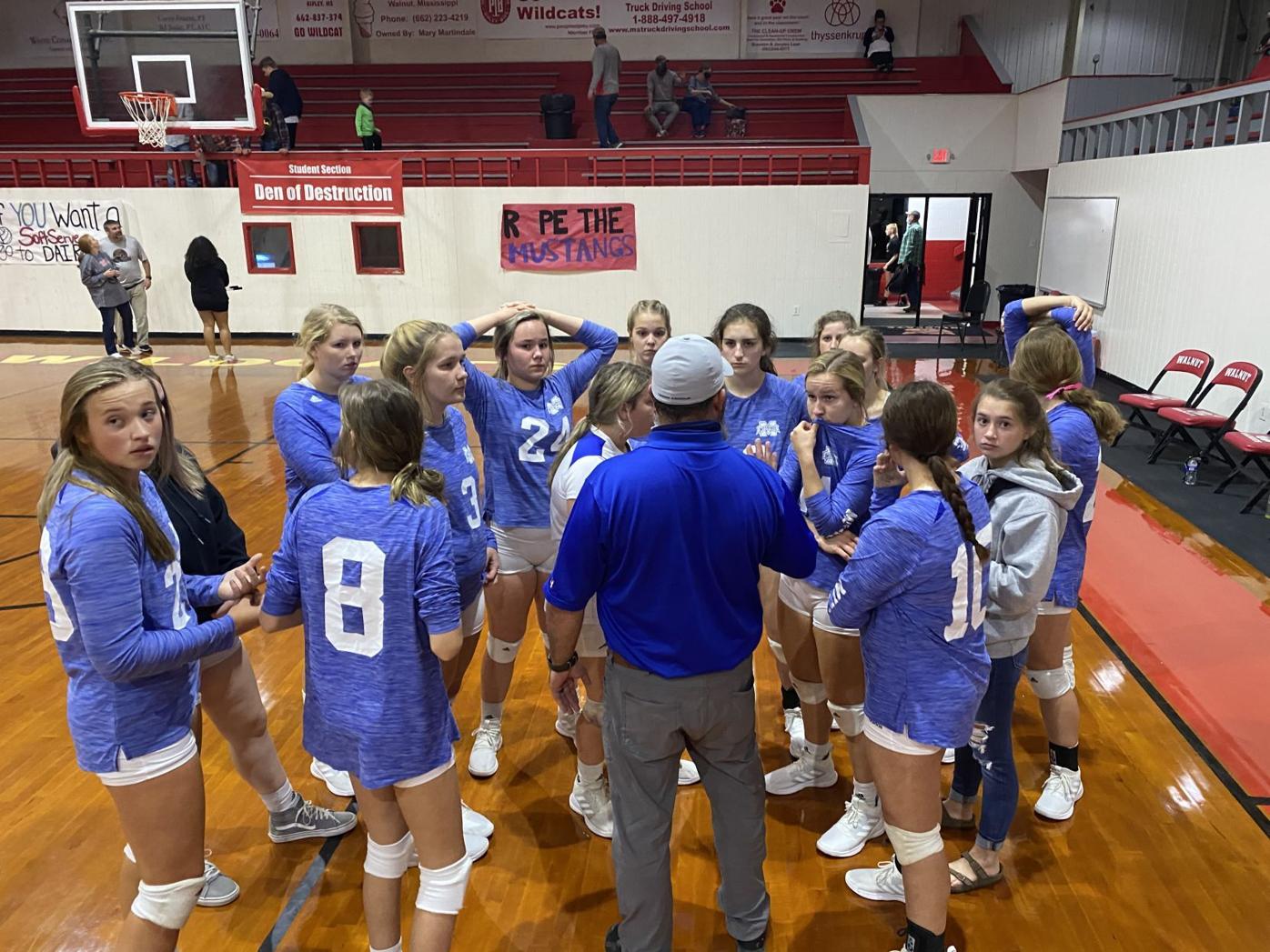 Mantachie players huddle up following their 3-2 loss to Walnut on Tuesday as the coaches confirm the point differentials. 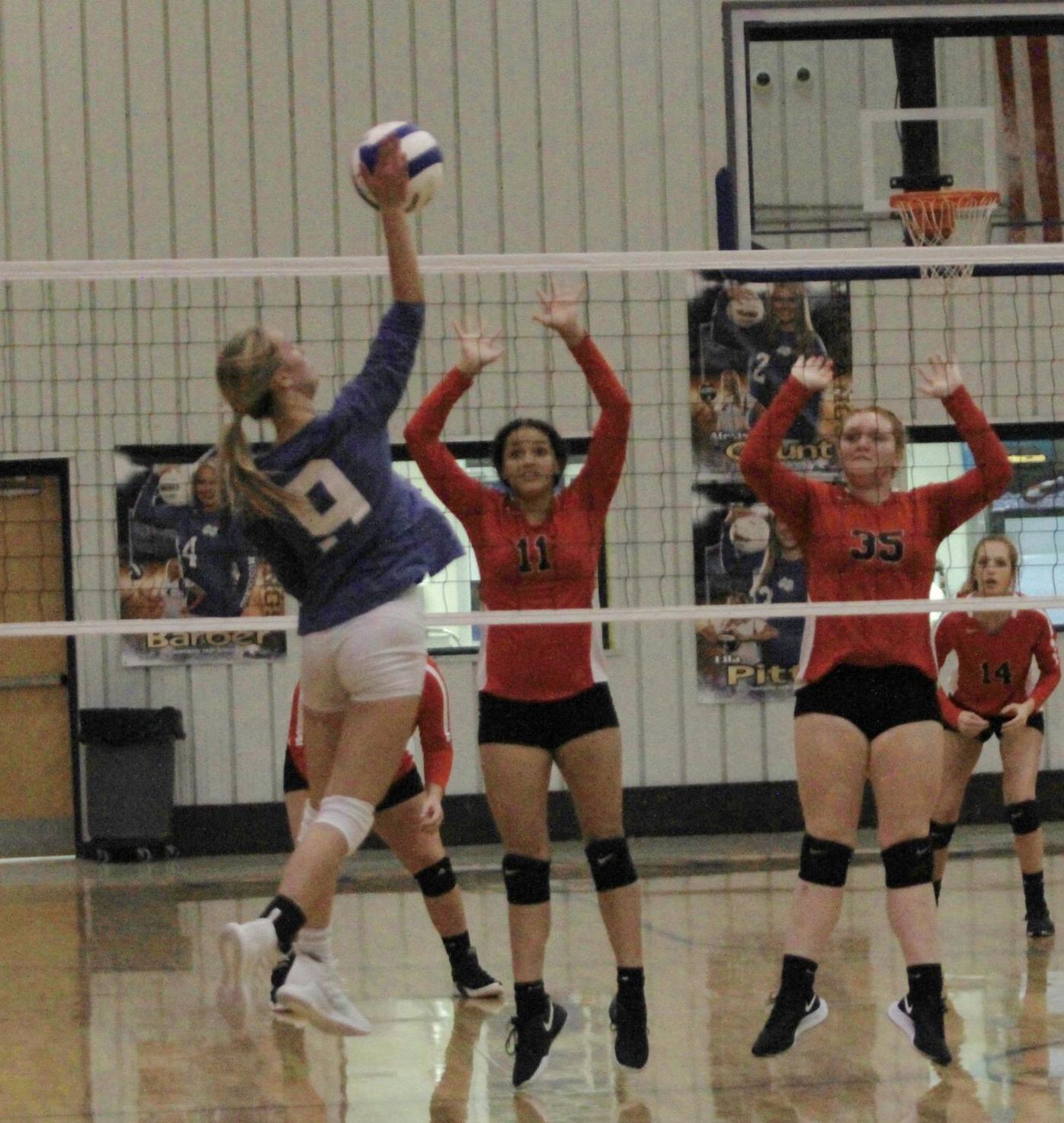 Mantachie players huddle up following their 3-2 loss to Walnut on Tuesday as the coaches confirm the point differentials.

The volleyball division 1-2A title and the division’s No. 1 seed in the state playoffs was determined last Monday and Tuesday when Mantachie High School and Walnut Attendance Center faced each other on back to back days.

Mantachie hosted the Lady Wildcats on Monday and earned the 3-2 match victory. The Lady Mustangs played from behind most of the first set, but they never fell behind more than three points. Senior Ella Pitts and freshman Bailey Coker each had kills that tied the set up, Coker’s at 23-23 was the last point for Mantachie in the set. Walnut took set 1, 25-23.

After tying the second set at 6-6, the Lady Mustangs never trailed again. With it tied at 6-6 and Coker serving, Mantachie went on a five-point run that Walnut didn’t recover from. Mantachie took set 2, 25-18.

If anyone questioned if these two teams were the best in 1-2A, their question was answered in set three. There were 12 ties in the set with neither team letting the other build too much momentum. Walnut outlasted Mantachie 30-28.

The Lady Mustangs took set four, 25-21. Senior Madison Jones and freshman Ramsey Montgomery each had critical aces in the win.

In volleyball, set five is a 15-point sprint. An early multi-point lead creates a daunting challenge that’s hard to overcome. The Lady Mustangs jumped out to a 5-1 lead and the set ended with a block by Montgomery to give the Lady Mustangs the 15-11 win and the match 3-2.

The Lady Mustangs traveled to Walnut Tuesday evening looking for their first division title in the program’s three year history. It took a tiebreaker to decide the champion.

“I’m extremely proud of them,” said Mantachie coach Kristi Montgomery. “These kids have come out every day, worked their rear ends off and give me everything they have. They fight. They are always fighters.”

Walnut (12-8, 4-1) entered the night needing to defeat the Lady Mustangs in four sets or less, or by more than 11 points, after Mantachie took a 3-2 win on Monday.

Walnut tied the match at 1-1 after building a nine-point lead in the second set.

The third set proved to be the dagger to Walnut’s championship hopes. The Lady Wildcats handed Mantachie 19 of its 25 points on errors, as the Lady Mustangs used a 12-point differential to secure the No. 1 seed for the upcoming 2A playoffs.

Mantachie’s Montgomery led her team with six kills and two aces. Leach added five kills to the mix as well.

Mantachie’s varsity team finished the regular season at 17-4 and 5-1 in division 1-2A. Junior varsity ended 14-1, and the junior high team had a perfect record at 8-0.

The Lady Mustangs hosted Pisgah last night in their first playoff appearance. Look for coverage in next week’s edition of The Times.