Print and Online Subscriptions to the Itawamba Times with online e-Edition Access. Print prices are for in-county subscriptions. Please call 662-862-3141 if you are out-of-area and would like to subscribe. 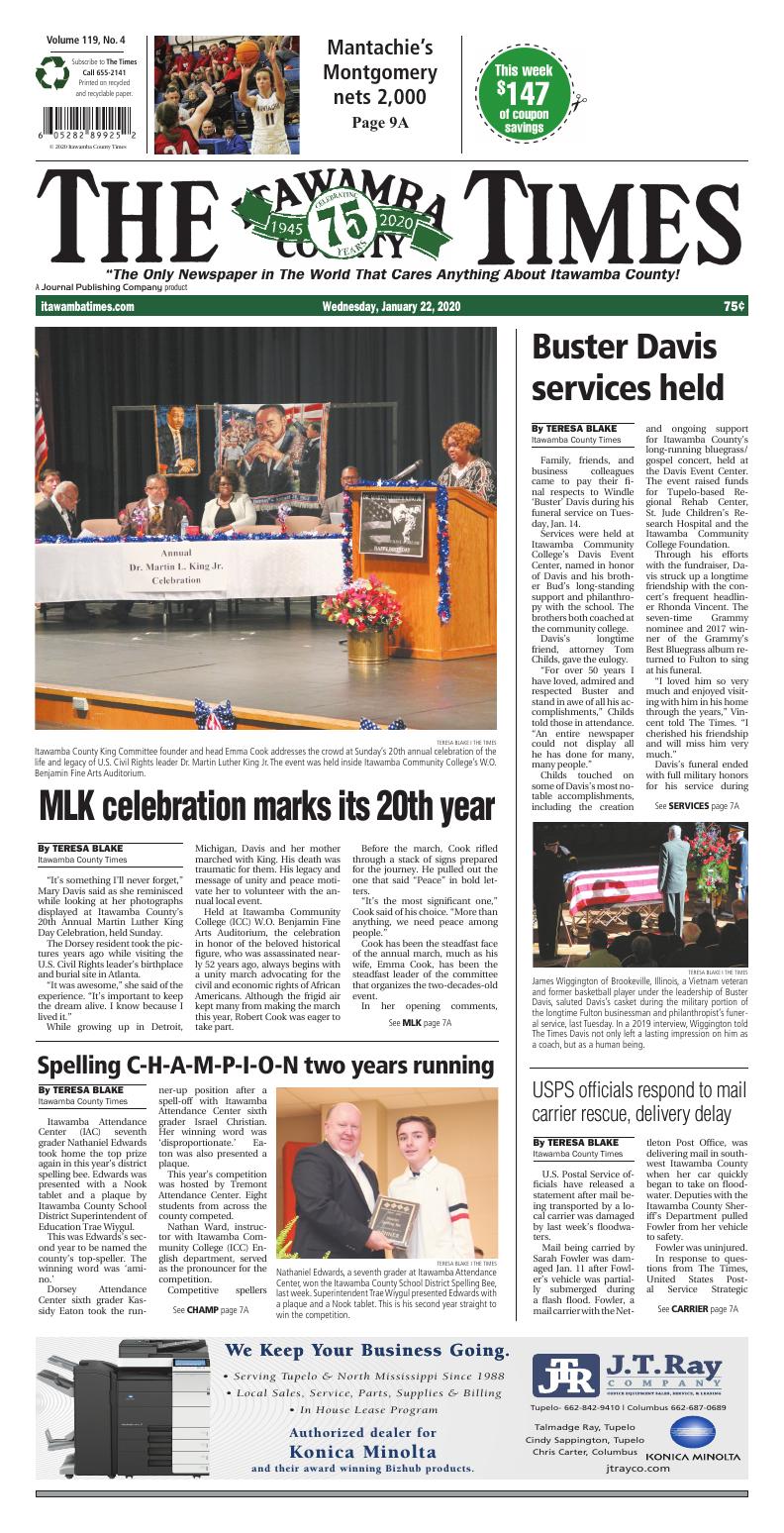 Robert Cook, right, is the steadfast face of Itawamba County’s Unity March. Cook chose the sign with the message of ‘Peace’ for this year’s event. He said, “More than anything, we need peace among people.”

Mary Davis of Dorsey reminisces as she talks about her display of photographs made during her visit to Dr. Martin Luther King, Jr.’s birthplace and museum in Atlanta. The collage was displayed outside of ICC’s fine arts auditorium. As a young child, Davis and her mother marched with Dr. King in Detroit, Michigan.

The Dorsey resident took the pictures years ago while visiting the U.S. Civil Rights leader’s birthplace and burial site in Atlanta.

“It was awesome,” she said of the experience. “It’s important to keep the dream alive. I know because I lived it.”

While growing up in Detroit, Michigan, Davis and her mother marched with King. His death was traumatic for them. His legacy and message of unity and peace motivate her to volunteer with the annual local event.

Held at Itawamba Community College (ICC) W.O. Benjamin Fine Arts Auditorium, the celebration in honor of the beloved historical figure, who was assassinated nearly 52 years ago, always begins with a unity march advocating for the civil and economic rights of African Americans. Although the frigid air kept many from making the march this year, Robert Cook was eager to take part.

Before the march, Cook rifled through a stack of signs prepared for the journey. He pulled out the one that said “Peace” in bold letters.

“It’s the most significant one,” Cook said of his choice. “More than anything, we need peace among people.”

In her opening comments, Emma Cook told the crowd at the ceremony that she believes it’s still important to celebrate what King fought and died to accomplish.

“We must come together to celebrate freedom, love, justice and equality,” she said. “Dr. King represented all of these.”

Pastor Robert Fields of New Chapel C.M.E. Church, located just outside Fulton, was this year’s guest speaker. In his message, “Crossing the Bridge,” Fields reminded the crowd of Bloody Sunday on March 7, 1965, when some 600 protesters crossed the Edmund Pettus Bridge in Selma, Alabama.

In his message, he emphasized to attendees that not everyone’s bridge is the same, but everyone has a story of the bridges they have crossed.

“The purpose of this celebration is to continue the drive,” he said. “What are you going to do to address the bridges we still need to cross? We must do so in unity. It was their collective unity that they crossed the Edmund Pettus Bridge.”

Fields told the congregation, “Building and crossing the bridge of hope is a challenge for each of us.”

Special music and dramatic arrangements framed the event with powerful messages of their own. Evangelist Lessie William sang the words she advised listeners to take “One Day at a Time.”

Itawamba Agricultural High School students Jaylen Gant and Genise Dabbs were named this year’s recipients of scholarships through the Itawamba County King Committee. The Family Resource Center (FRC) in Fulton received the committee’s Itawamba Spirit Award. Buddy Collins accepted the award on behalf of the group and thanked the King Committee for the honor.

“FRC does it all. They focus on the children, the adults, the whole family and the community,” Emma Cook said of the Family Resource Center. “That’s what is needed here. Their outreach to the community covers education, clothing, food, whatever a person needs – a spirit of goodness and kindness.”

Both are among the many qualities, she reiterated, King himself embodied.

Related
OUR OPINION: We must remember the power of Dr. King's words
aarmour
Jan 22, 2020

Words, even powerful ones, gradually lose their potency.

This was Edwards’s second year to be named the county’s top-speller. The winning word was ‘amino.’

This year’s competition was hosted by Tremont Attendance Center. Eight students from across the county competed.

Competitive spellers take turns spelling consecutively more difficult words. A speller is allowed to ask the pronouncer for the word’s definition, part of speech, its use in a sentence, alternate pronunciation and if it comes from a particular root word.

Edwards will move on to compete in the statewide spelling competition in Jackson in March. If he wins that, he’ll go on to the national competition. 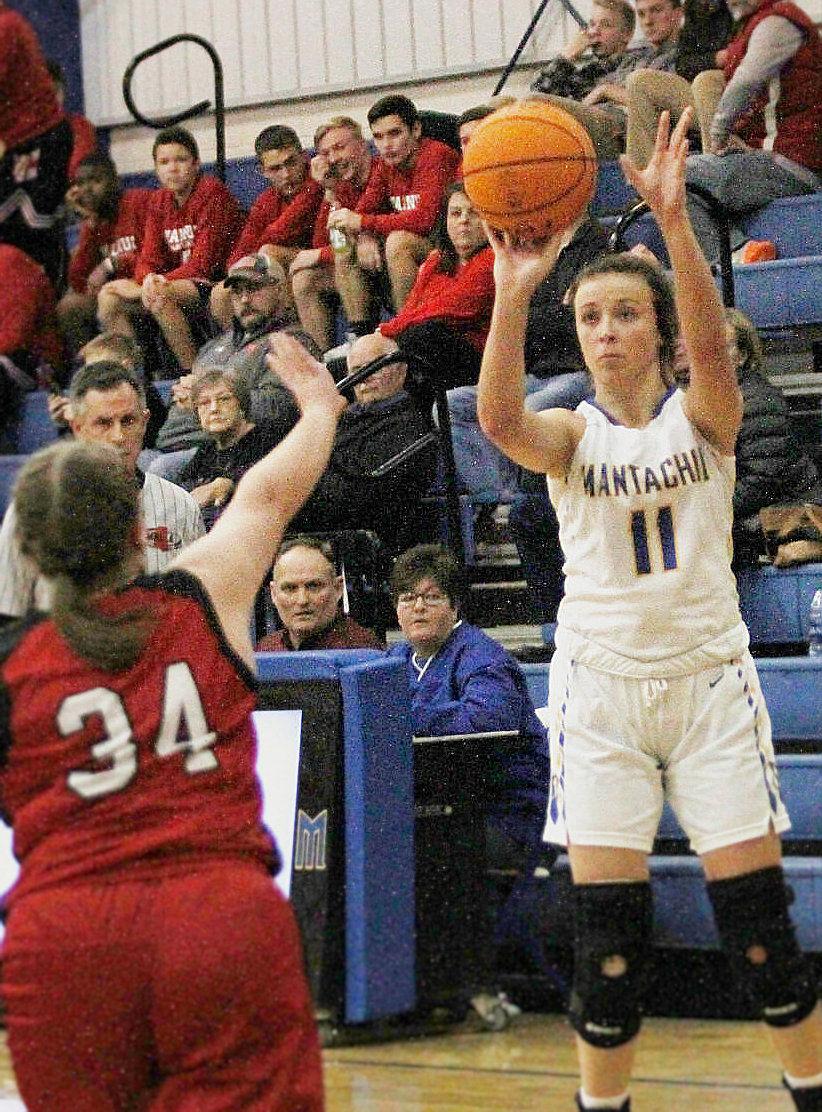 aloden / ABBY LODEN I THE TIMES

Mantachie senior McKinley Montgomery shoots a 3-pointer during Friday’s win over Walnut. Montgomery has scored more than 2,000 points in her career.

James Wiggington of Brookeville, Illinois, a Vietnam veteran and former basketball player under the leadership of Buster Davis, saluted Davis’s casket during the military portion of the longtime Fulton businessman and philanthropist’s funeral service, last Tuesday. In a 2019 interview, Wiggington told The Times Davis not only left a lasting impression on him as a coach, but as a human being.

Family, friends, and business colleagues came to pay their final respects to Windle ‘Buster’ Davis during his funeral service on Tuesday, Jan. 14.

Services were held at Itawamba Community College’s Davis Event Center, named in honor of Davis and his brother Bud’s long-standing support and philanthropy with the school. The brothers both coached at the community college.

“For over 50 years I have loved, admired and respected Buster and stand in awe of all his accomplishments,” Childs told those in attendance. “An entire newspaper could not display all he has done for many, many people.”

Through his efforts with the fundraiser, Davis struck up a longtime friendship with the concert’s frequent headliner Rhonda Vincent. The seven-time Grammy nominee and 2017 winner of the Grammy’s Best Bluegrass album returned to Fulton to sing at his funeral.

“I loved him so very much and enjoyed visiting with him in his home through the years,” Vincent told The Times. “I cherished his friendship and will miss him very much.”

Davis’s funeral ended with full military honors for his service during World War II. James Wiggington, a Vietnam veteran and former basketball player under Davis’s leadership, took part in the salute of Davis’s flagged draped casket during the ceremony.

“He left a lasting impression on me, not just as a coach but as a human being,” Wigginton said in 2019 interview with The Times.

Davis was buried next to his wife, Billie Faye South Davis, in Cotton Springs Cemetery in Tishomingo County.

U.S. Postal Service officials have released a statement after mail being transported by a local carrier was damaged by last week’s floodwaters.

Mail being carried by Sarah Fowler was damaged Jan. 11 after Fowler’s vehicle was partially submerged during a flash flood. Fowler, a mail carrier with the Nettleton Post Office, was delivering mail in southwest Itawamba County when her car quickly began to take on floodwater. Deputies with the Itawamba County Sheriff’s Department pulled Fowler from her vehicle to safety.

In response to questions from The Times, United States Postal Service Strategic Communications Specialist Tracie M. Finley of St. Petersburg, Florida, called the incident “unfortunate” and apologized to anyone who saw a delay in the delivery of their mail because of the flash flooding.

“As an integral part of the communities we serve, the U.S. Postal Service strives every day to provide excellent service to our valued customers,” she told The Times via email. “The safety and well-being of our employees and customers is the highest priority for the Postal Service. While the goal is to finalize mail delivery, variables such as severe flooding and dangerous weather may affect delivery times. We apologize for any inconvenience that our customers may have experienced due to this unforeseen incident.”

Finley said the local post office followed the national postal service’s guidelines for delivering mail after the floodwaters receded. She said the delayed mail should have been delivered the following day.

“The U.S. Postal Service has specific guidelines for damaged mail that we follow in such cases, depending on the specific circumstances,” she told The Times. “We always make every attempt to deliver items, if possible. Customers served by this particular route received their letters and packages the next business day, once the weather allowed for safe delivery.”

Finley said outgoing mail was unaffected by the incident. 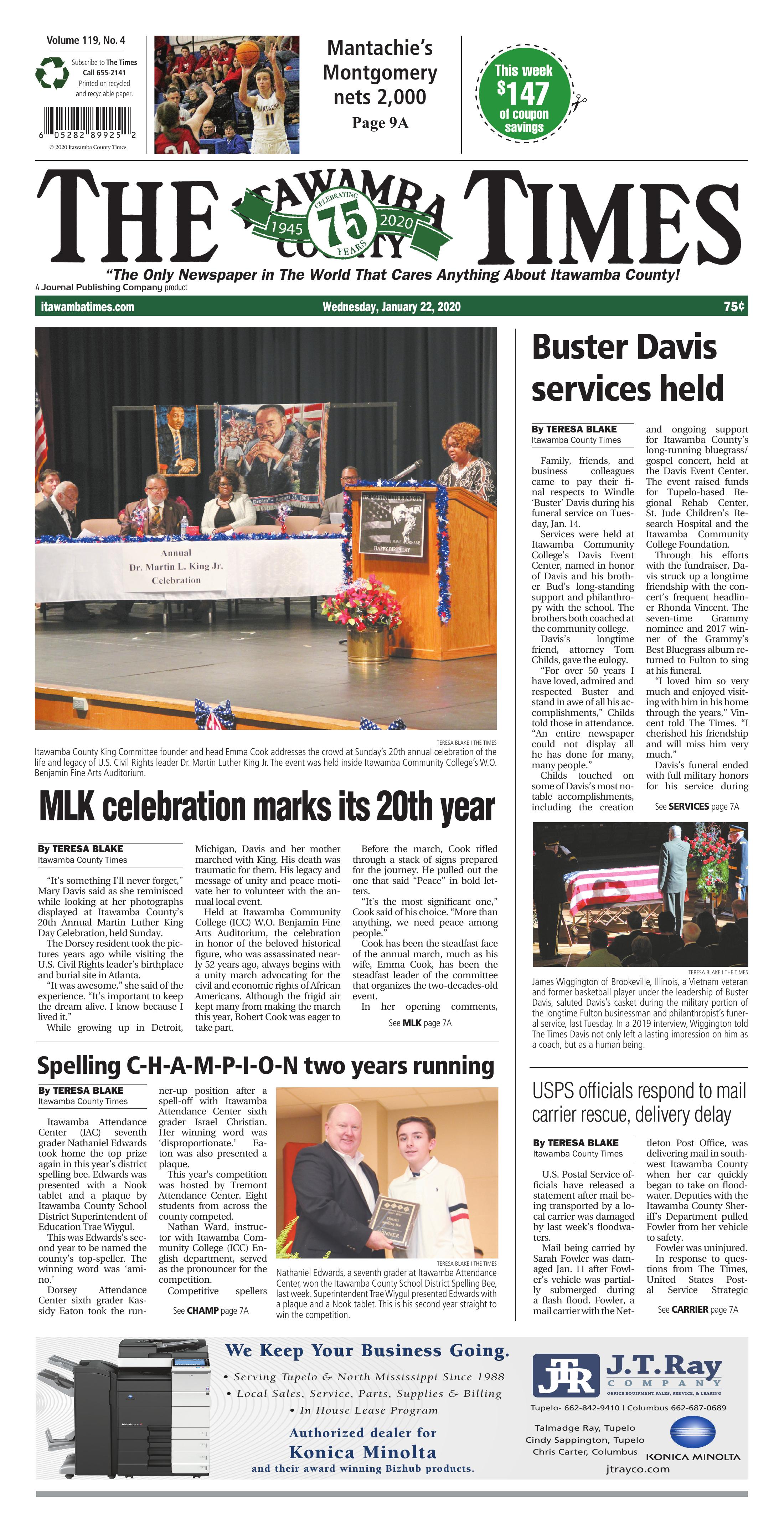