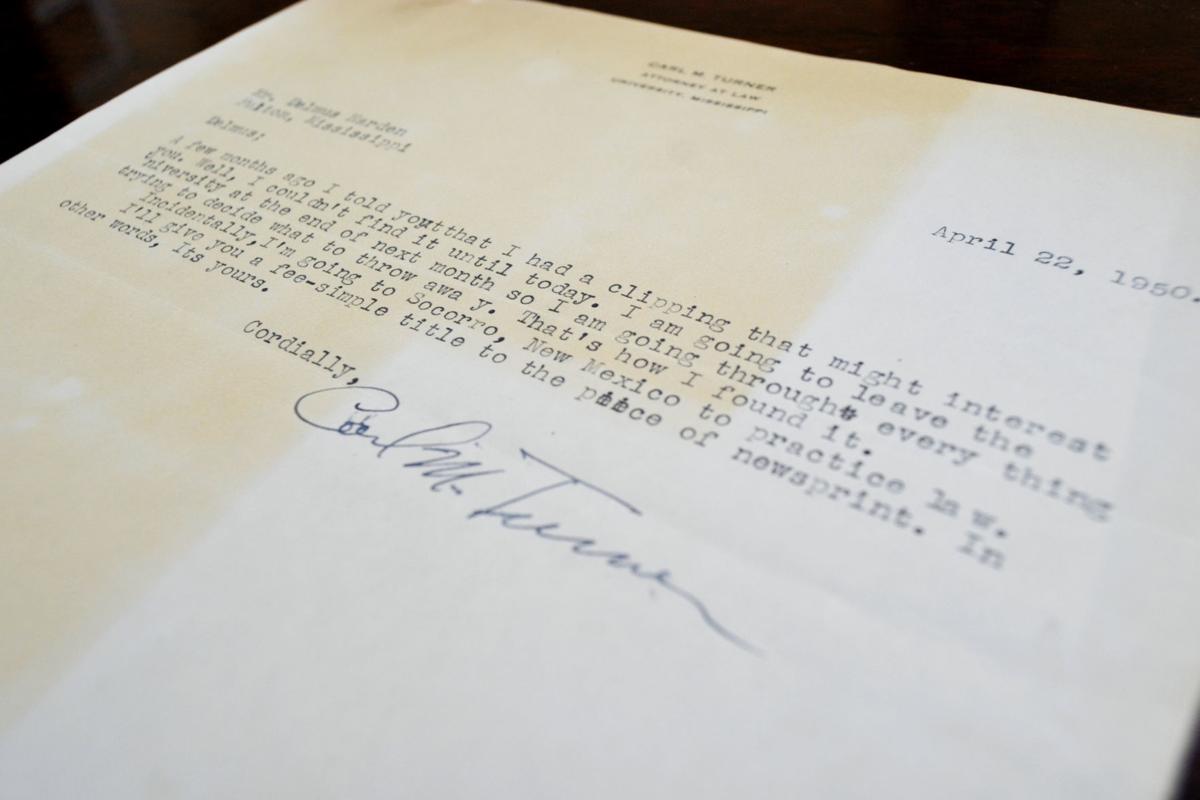 The yellowed shape of a newspaper clipping is indelibly left on the letter Oxford attorney Carl Turner sent to Delmus Harden in 1950. The letter was tucked for decades between the pages of one of The Times’ bound volumes, attached to it, an article that tied together Harden, Turner and a soon-to-be CIA operative. 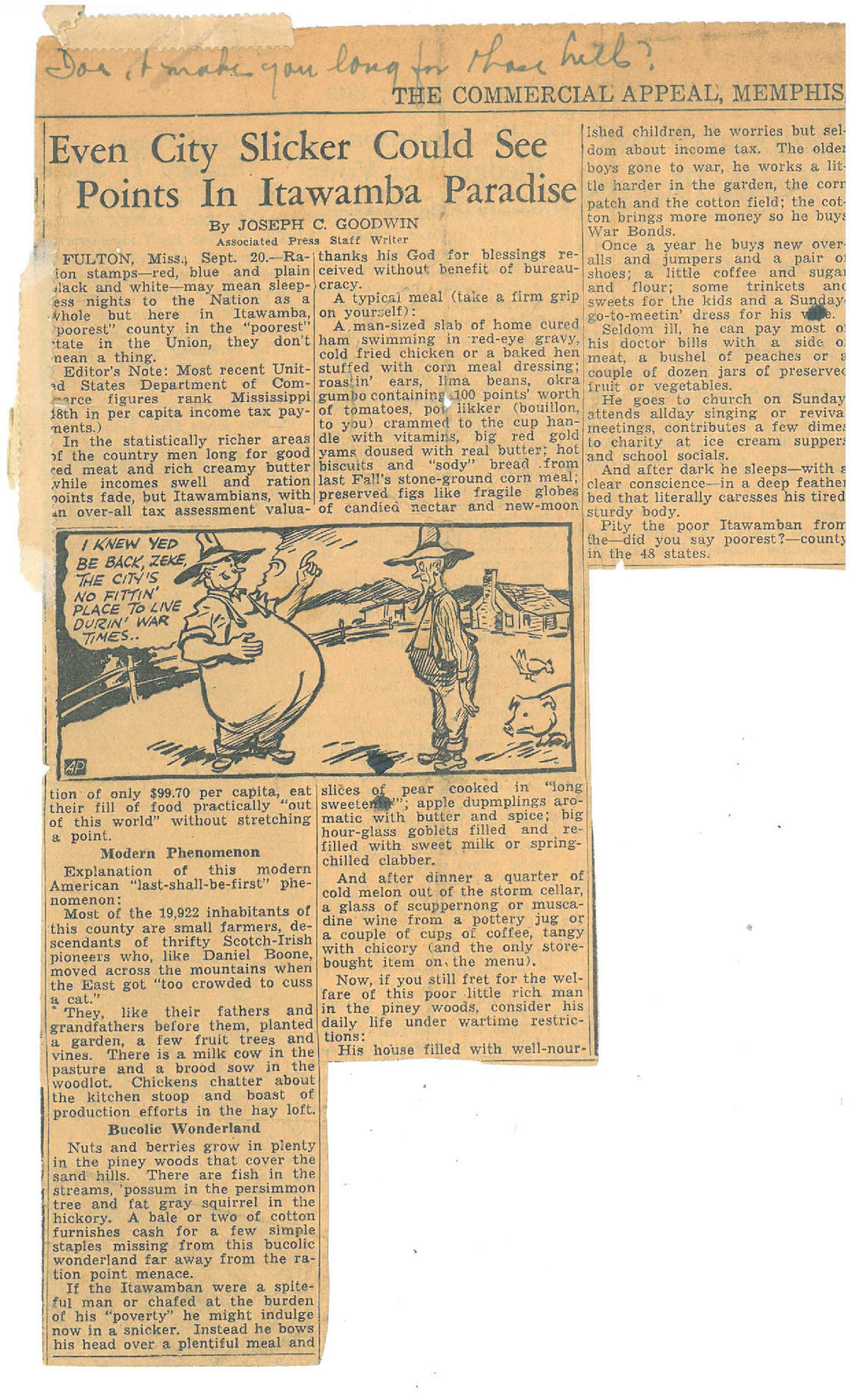 Penned by Associated Press writer Joseph C. Goodwin, the clipping attached to Carl Turner’s letter was published in the Sept. 23, 1943 edition of the Memphis-based Commercial Appeal. Its headline: “Even City Slicker Could See Points in Itawamba Paradise.” In it, Goodwin writes of the bountiful blessings and bucolic wonderland of the “poorest county in the poorest state.”

The yellowed shape of a newspaper clipping is indelibly left on the letter Oxford attorney Carl Turner sent to Delmus Harden in 1950. The letter was tucked for decades between the pages of one of The Times’ bound volumes, attached to it, an article that tied together Harden, Turner and a soon-to-be CIA operative.

Penned by Associated Press writer Joseph C. Goodwin, the clipping attached to Carl Turner’s letter was published in the Sept. 23, 1943 edition of the Memphis-based Commercial Appeal. Its headline: “Even City Slicker Could See Points in Itawamba Paradise.” In it, Goodwin writes of the bountiful blessings and bucolic wonderland of the “poorest county in the poorest state.”

In April 1950, Oxford-based attorney at law Carl M. Turner sent a letter to Delmus Harden, owner, editor, and publisher of The Itawamba County Times. The letter came with a gift: a clipping of a short newspaper article.

“A few months ago, I told you that I had a clipping that might interest you,” Turner wrote in his letter. “I couldn’t find it until today. “I am going to leave the University at the end of next month so I am going through every thing trying to decide what to throw away. That’s how I found it.”

The clipping featured an article published in the Sept. 23, 1943 edition of the Memphis-based Commercial Appeal. It’s headline: “Even City Slicker Could See Points in Itawamba Paradise.” It was penned by Associated Press writer Joseph C. Goodwin.

The short article tied together three men: one who believed Itawamba County worthy of writing about, and two who felt his words were worth enough to hang onto.

A love letter to Itawamba

Written during the food rations days of World War II, Goodwin’s article reads like a love letter to Itawamba County, then listed by the U.S. Department of Commerce as the poorest state in the country.

“Ration stamps – red, blue and plain black and white – may mean sleepless nights to the Nation,” Goodwin wrote in his 1943 article. “But here in Itawamba, the poorest county in the ‘poorest’ state in the Union, they don’t mean a thing.”

Goodwin boasts that Itawamba County’s food supply was plentiful thanks to its citizen’s descendants, “like their fathers and grandfathers before they planted a garden, a few fruit trees and vines. There’s a milk cow in the pasture and a brood sow in the woodlot.”

Goodwin writes at length about the “poor little rich man in the piney woods.” His words paint a picture of a typical meal: “Take a firm grip on yourself. Is a man-sized slab of home-cured ham swimming in red-eye gravy, cold fried chicken or a baked hen, roastin’ ears, lima beans and big red gold yams doused with real butter.”

No doubt from his imagery, Goodwin himself had slid a chair under the meal table of an Itawamba home. After doing so, with a few strokes of his pen, counterbalanced the nation’s opinion of bucolic Itawamba County.

Goodwin ended his article with a lengthy summation of life in Itawamba County – church on Sunday with an all-day singing, ice cream suppers, and school socials. After dark, Goodwin writes, the farmer sleeps with a clear conscience in a deep feather bed that literally caresses his tired, sturdy body .

His sarcastic last line counterbalancing the heavy words placed on Itawamba County by the United States Department of Commerce:

“Pity the poor Itawambian from the – did you say poorest county?”

After three months of simultaneous printing, The Beacon and The Times were merged by their owners, Reverend Overton and Theron Harden. Both men subsequently decided they couldn’t continue in the business, and on June 15, 1945, Delmus Harden and Elzie Wright took over “The Itawamba County Times.” After four months, Harden bought Wright’s share and became the sole owner.

“It is the ambition of each of us to serve our native county in every way possible,” Harden and Wright wrote in the June 21, 1945 edition of The Times. “This is your paper and (we) will regard it as such. Your interest is our interest.”

They end their editorial with a plea to their readers: “Help us to give Itawamba County a good paper with the news the people want to read, and to boost our county in such a way that we live up to the motto we have chosen, ‘Itawambians who serve Itawambians.’”

After purchasing Wright’s portion of the business four months later, Harden changed the motto to one that received national recognition: “The Only Newspaper In The World That Cares Anything About Itawamba County.”

Harden’s reputation of having Itawamba’s interest at heart undoubtedly led Carl Turner to pass the article on to the man who knew it best.

After gifting the letter to Harden, Turner headed west to New Mexico, where he practiced law and met with great success. He was elected to the New Mexico House of Representatives before becoming the first and longest-serving executive manager of the New Mexico Rural Electric Cooperative Association in Santa Fe, according to his obituary. His work included creating $3.5 million in scholarships that provided for over 3,200 students in that state.

Enchantment Magazine, a statewide magazine was also published under Turner’s leadership, reaching 80% of New Mexico. Its publication exceeded only by the Sunday Albuquerque Journal. Among his many other accomplishments, he was a moving force in creating the Cumbres and Toltec Scenic Railroad. He served as the railroad’s chief lobbyist and commissioner for extended periods. In recognition of his service, a parlor car was named in his honor in 2007.

Turner was known as an extraordinary storyteller and an avid genealogist having traced his roots back to 1623.

After his death in August 2008, Turner’s body was brought back to Itawamba County and buried in Hardens Chapel Cemetery.

There is little to document where Goodwin came from or what his connection to Itawamba County might be. There are, however, documents revealing his colorful career with The Associated Press and the Central Intelligence Agency (CIA).

In March 1946, Goodwin, still with The Associated Press, was writing from Tehran, Iran. In May 1948, he was reporting from Haifa with the Arab Legion in Central Palestine.

Goodwin’s name appeared in numerous articles before appearing in officially released documents from the CIA.

In one of the agency’s Public Affairs Advisory Fact Sheet, on Aug. 29, 1966 “Goodwin, an intelligence officer in the Directorate of Plans (DDP) and former Associated Press editor and war correspondent, was named by then-Director Richard Helms to replace George F. Moran as the Assistant to the Director. During his period in office, the Ramparts magazine charges concerning the CIA infiltration of the National Students Association were published. The reporting on the six-day war between Israel and the Arabs won plaudits during Goodwin’s tenure.”

Although his name is found in multiple CIA documents, the agency’s last statement concerning Goodwin is when Angus Thuermer was appointed as his replacement on November 1, 1971. The only mention of Joseph C. Goodwin thereafter is in a New York Times article dated December 27, 1977. The paper took an in-depth at reporters who possibly worked as CIA operatives during their careers. Kennett Love, a former New York Times correspondent in the Middle East, had a “cooperative relationship” with the CIA in which he “ran errands.” He specifically mentions Goodwin as the American official who asked him for help.

The Times has been unable to locate records of Goodwin’s life, career, or death following the article.

The fate of the article

Seventy years after it arrived, Turner’s yellowed letter to Harden was found pressed between the musty pages of a 1951 edition of The Itawamba County Times, those pages themselves pressed between the dingy hardback covers of an aging book filled with aging newsprint. Presumably, it has remained there for generations.

The clipping of Goodwin’s article, now as brittle as a moth’s wing, was still attached to it. Lifted, its outline remained on the typed page, the two inseparable even when apart.

Scrawled above the article, in an elegant handwriting that doesn’t appear to belong to either Harden or Turner, is a single line:

“Does it make you long for those hills?”