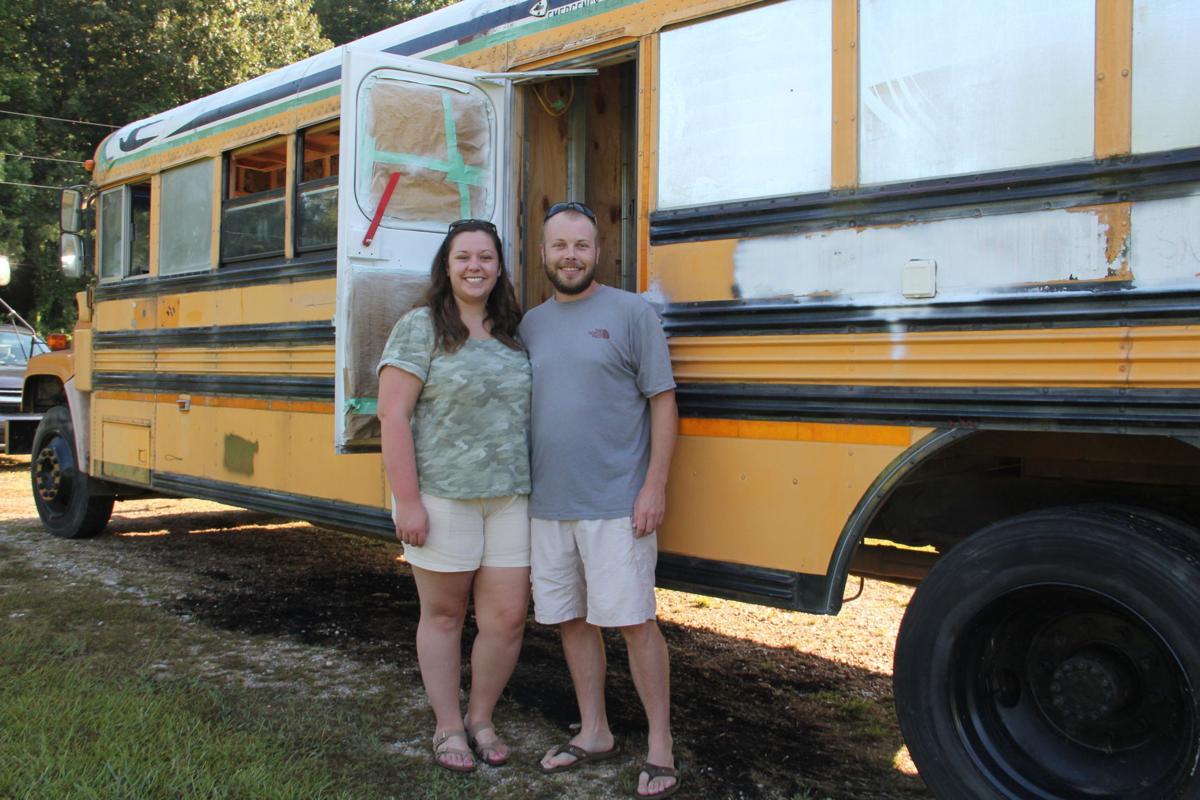 Jon and Leslie Herrington have been working on their skoolie since September 2019. The couple plans to head south to Florida when they are finished. They’re using many upcycled materials to complete the project. Their total budget is $10,000. 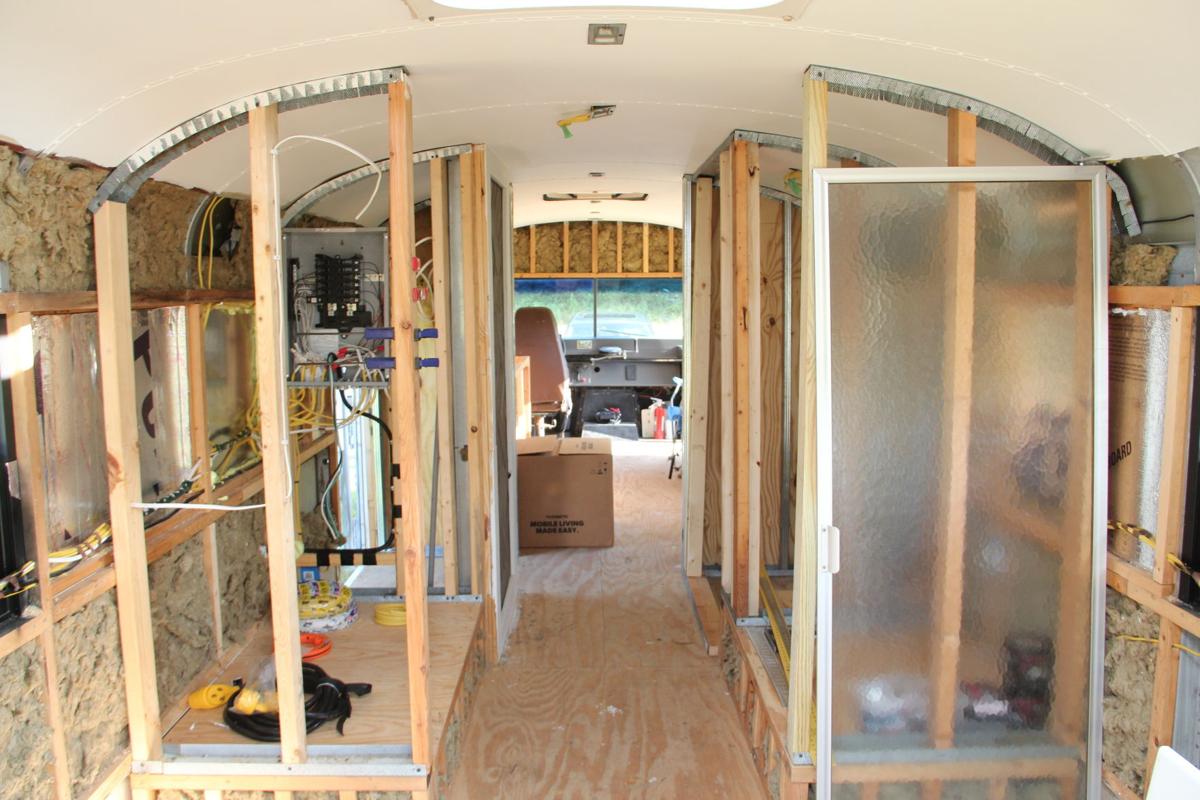 The Herringtons watch YouTube videos, read how-to books and have friends that help them on projects in their school-bus-turned-RV. 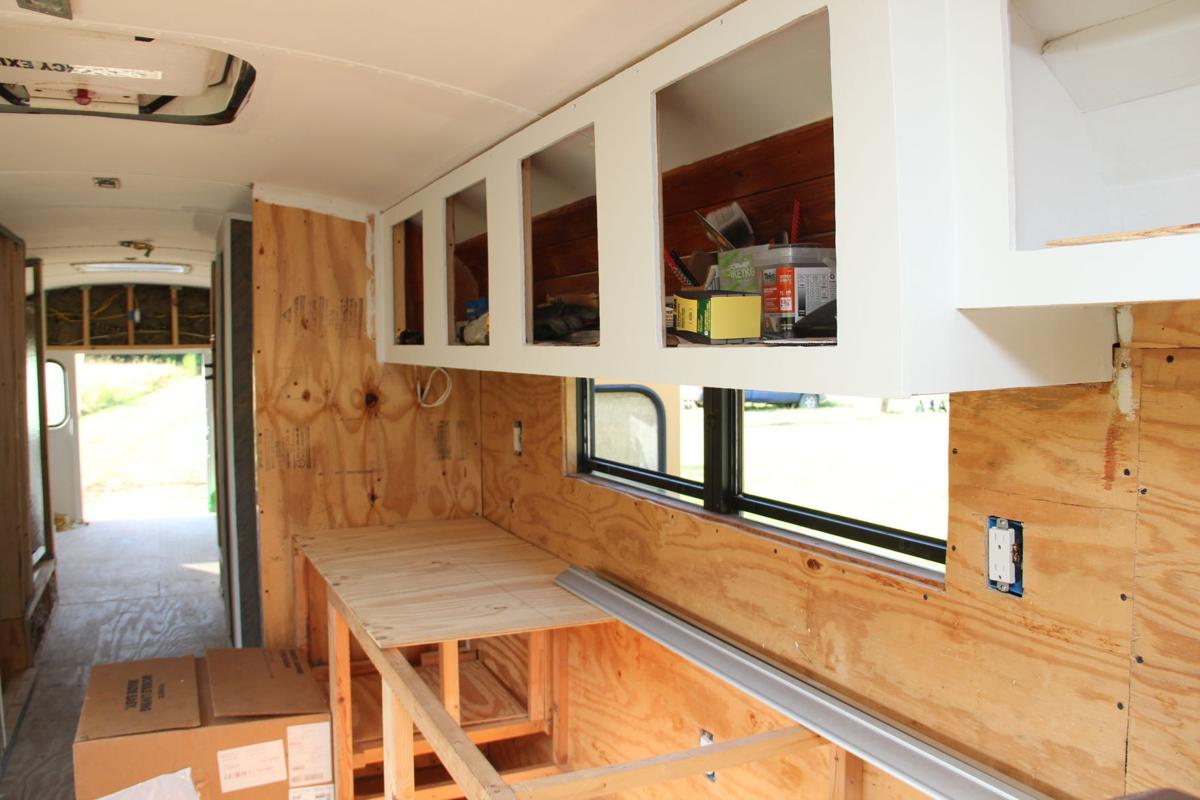 The front of the Herringtons’ skoolie houses the living room and kitchen. They hope to be finished with the project in a couple of months,

Jon and Leslie Herrington have been working on their skoolie since September 2019. The couple plans to head south to Florida when they are finished. They’re using many upcycled materials to complete the project. Their total budget is $10,000.

The Herringtons watch YouTube videos, read how-to books and have friends that help them on projects in their school-bus-turned-RV.

The front of the Herringtons’ skoolie houses the living room and kitchen. They hope to be finished with the project in a couple of months,

By all appearances, they look like any other young couple trying to navigate their way through uncertain pandemic days.

But at heart, Jon and Leslie Herrington’s sense of adventure is leading them to roam the backroads, beaches, and hill countries from coast to coast.

“We looked at RV’s and we quickly ruled that out,” Leslie Herrington said as they stepped through the school bus door. “Then we went as far as buying a frame to build a tiny house but decided that required a lot more than we wanted to invest. That’s when we started looking into skoolies.”

Skoolies are upcycled school buses made into houses. Often dubbed the original tiny house, the bus doesn’t require a separate towing vehicle like RV’s, which played a major factor when it came to the Herrington’s $10,000 budget for the project.

“We found our bus in Bossier Parish, Louisiana, and paid $2,000 for it,” Leslie Herrington said. “We felt like we got a great deal.”

In September 2019, the couple parked their 1995 GMC Bluebird southeast of Tremont and started the arduous task of taking the forty-plus seater down to the shell and turning it into a home.

Jon is the first to admit that although he has worked in maintenance, he’s learning the bulk of the how-tos for their project from about any source he can.

“I have no carpentry experience,” Jon Herrington said. “I watch a lot of videos, read a lot of books, and we have some good friends that help us from time to time.”

The first step was removing all those seats. Skoolies average between 200 to 300 square feet of living space once they are emptied and the Herrington’s want to utilize every inch of it.

After taking the seats out, the Herrington’s removed the inside panels. Jon pulled up the old rubberized floor, (a task he wasn’t fond off), so the old floor could be painted and sealed. Then came installing plywood subflooring and insulating the walls of their future home.

“We’re using a lot of recycled items,” Leslie Herrington said pointing to a wall built from pallets. “A friend gave us the insulation and another gave us a shower door he didn’t need from a remodeling project. Things like that help tremendously with our budget.”

When it came to the 22 windows, the couple kept in place only a few.

“They allowed a lot of heat to escape,” Jon Herrington said. “So we had panels made to put in their place and insulated behind them.”

The front portion of the skoolie will house their kitchen and living area. The two would like to have already been on the road, but COVID-19 caused long delays in the specialty appliances they needed for their new home. They are still waiting on their washer-dryer combo.

“The stove is propane and everything is wired for 120v,” Leslie Herrington elaborated. “We’re going to have butcher block countertops and a tile backsplash with a silicone-based grout.”

The back portion of the bus will be their bedroom and storage space.

Their project completions during the hot August days include framing out the closet and shower, running the wiring for the air conditioning, and painting the roof with Tropicool.

“The Tropicool reflects the sun’s heat,” Leslie said. “We plan to paint the whole thing white when we get closer to finishing.”

The Herrington’s have researched almost every jot and tittle of the project. Their bathroom will have a compost toilet and is strategically placed at the bus’s middle emergency door for easy access. The shower will have penny tiles with silicone grout, so it doesn’t break apart during bumpy rides.

Plans are for their living room sofa to fold out into a bed.

“We didn’t want to lose the luxury of having friends over,” she said.

The two admit it’s a trial and error process.

“If it doesn’t look like we want it to or like it should, we just tear it and start all over,” Jon said with a slight snicker.

It’s not just their sense of adventure that draws the two to the skoolie lifestyle.

“We don’t want to rent anymore and we didn’t want to commit to a mortgage for years,” Leslie Herrington said. “This suits us right now.”

As delayed appliances and supplies trickle in, the couple continues to work and post their progression on their Facebook page, The Nomadic Hippie. They’ve already gained some 1,300 followers from as far away as Australia and Canada, many they met through other skoolie groups.

As they stepped out the door of the ‘95 Bluebird, they said their first stop would be sunny Florida. From there, they’re not certain what adventures await when they grab the handle to open that nostalgic hinged door.

“We’re going to keep this old door just like it is and figure out a way to lock it,” Leslie Herrington said. “It’s like when you were a child, there’s just something about opening the school bus door.”