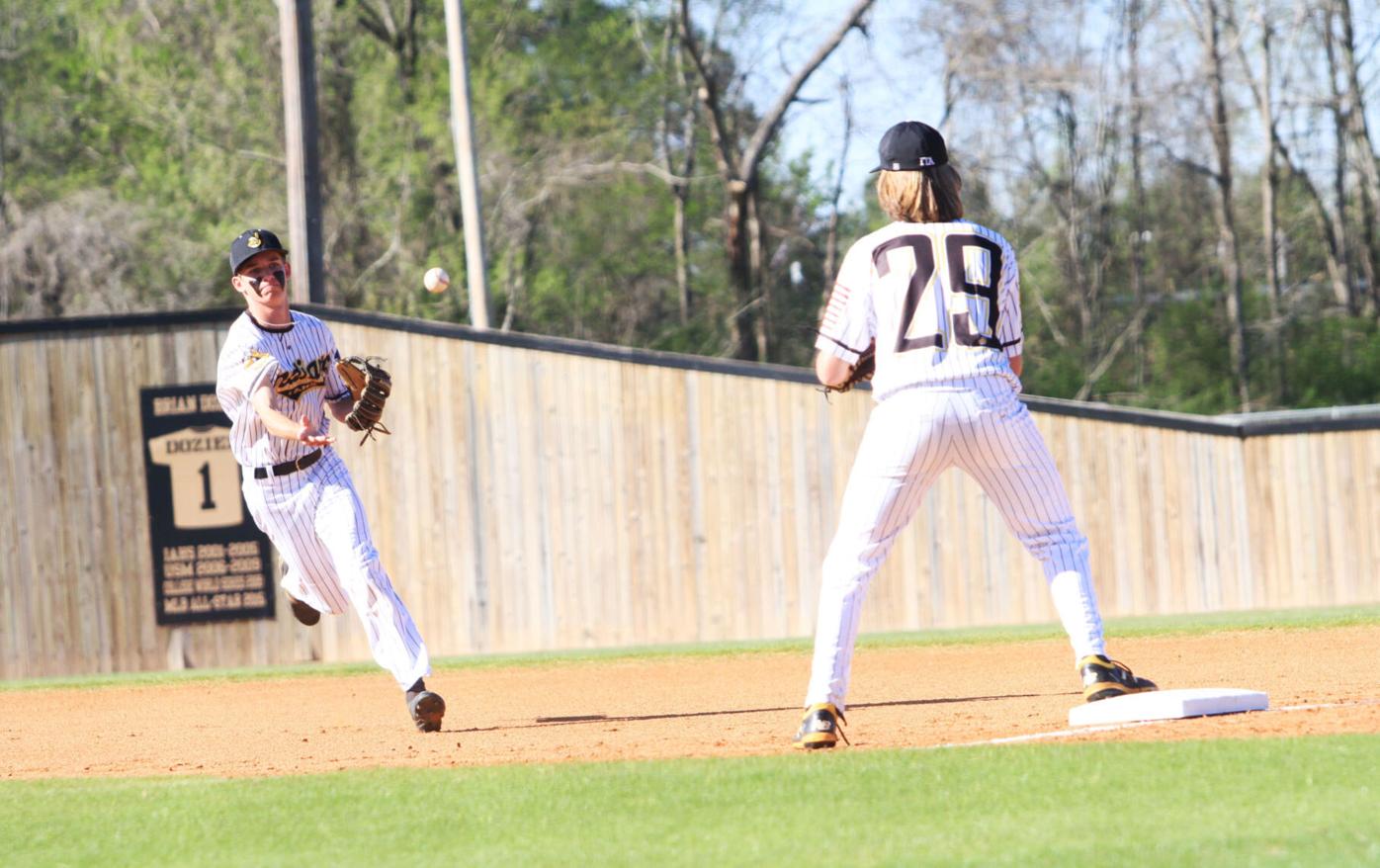 IAHS's Brantley Wiygul tosses the ball to first baseman Solomon Smith for an out during game one of last Monday's double-header against Shannon. 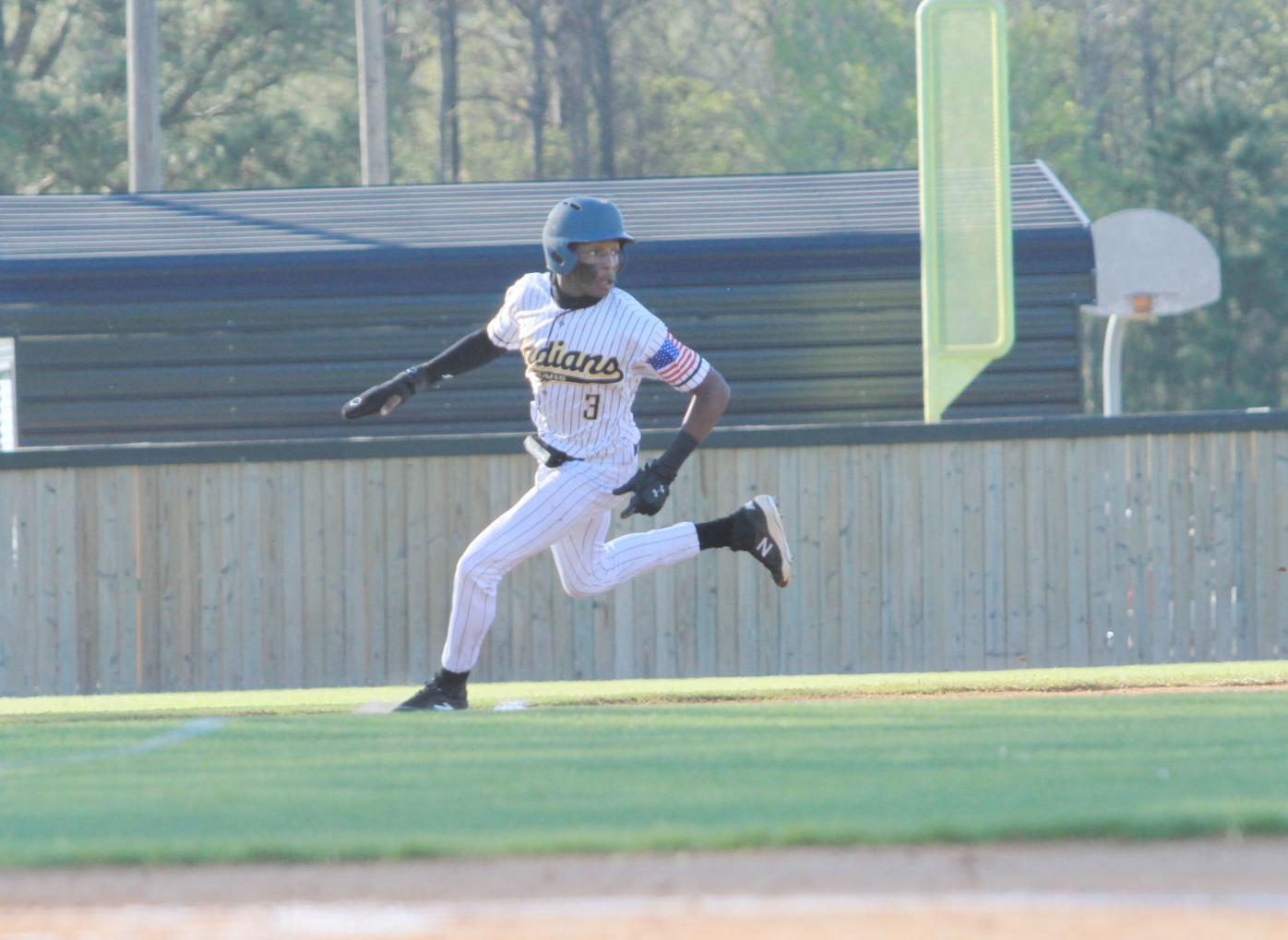 Isaac Smith reaches third on a groundout and scored on the play during the third inning of the Indians game one win over Shannon last Monday.

IAHS's Brantley Wiygul tosses the ball to first baseman Solomon Smith for an out during game one of last Monday's double-header against Shannon.

Isaac Smith reaches third on a groundout and scored on the play during the third inning of the Indians game one win over Shannon last Monday.

The Itawamba Agricultural High School Indians took both games of a double-header against division rival Shannon on Monday in Fulton but lost a close home game against Amory Saturday.

Junior Stone Collier went the distance on the mound giving up two runs on three hits in six innings with 11 strikeouts and one walk.

The Indians scored early. In the bottom of the first sophomore Zion Ashby walked with one out. Collier tripled to drive him in and eighth-grader Bryson Walters followed him with a double to score courtesy runner eighth-grader Cayden Prestage.

IAHS scored two more runs in the third after sophomore Isaac Smith reached on an error and senior Sam Mabus walked. Smith scored on a groundout by senior Cameron Deaton and Mabus on a single from junior William Blake.

The Raiders responded with two runs in the top of the fifth inning to get within two, but the Indians scored five in the home half of the inning and in the bottom of the sixth added two runs on wild pitches. Then, Ashby stole home for the walk-off win.

Collier, Blake and Walters each had two hits in the game. Collier, Walters and sophomore Ty Davis had two RBIs each. Blake, Ashby, Smith and sophomore Brantley Wiygul scored two runs apiece in the win.

The Raiders opened the game with a five-run first inning and held a 8-6 lead going into the bottom of the sixth. IAHS scored 12 runs to secure their second run-rule victory of the day.

The sixth inning began with a double from Wiygul. After a groundout, a walk and back-to-back doubles from Collier and Walters scored three runs. The Indians then began to lay on the scoring. Mabus doubled, Smith singled twice in the inning and Blake once but four walks, a hit batter and error added fuel to the fire that propelled the Indians to the win. Eighth-grader Cooper Waddle ended the game when he scored on a passed ball.

Walters, Smith and Wiygul had two hits each in the game. Wiygul, Collier, Walters and Mabus each had a double.

Collier drove in three runs and Smith two. Six Indians combined for the other six IAHS RBIs in the game.

Solomon Smith didn't allow a run over four innings of relief work and gave up two hits with six strike outs and a walk.

IAHS and Amory were tied at 4-4 heading into the final inning, but the Panthers scratched out a run, and the Indians were unable to counter, falling 5-4.

Blake, Collier, Davis (double) and Wiygul each had a hit, and Mabus, Davis and Walters each had an RBI.

IAHS was 8-8 as of Sunday evening and 3-1 in division 2-4A. They played a division game at Caledonia last night and host the Cavaliers on Friday.