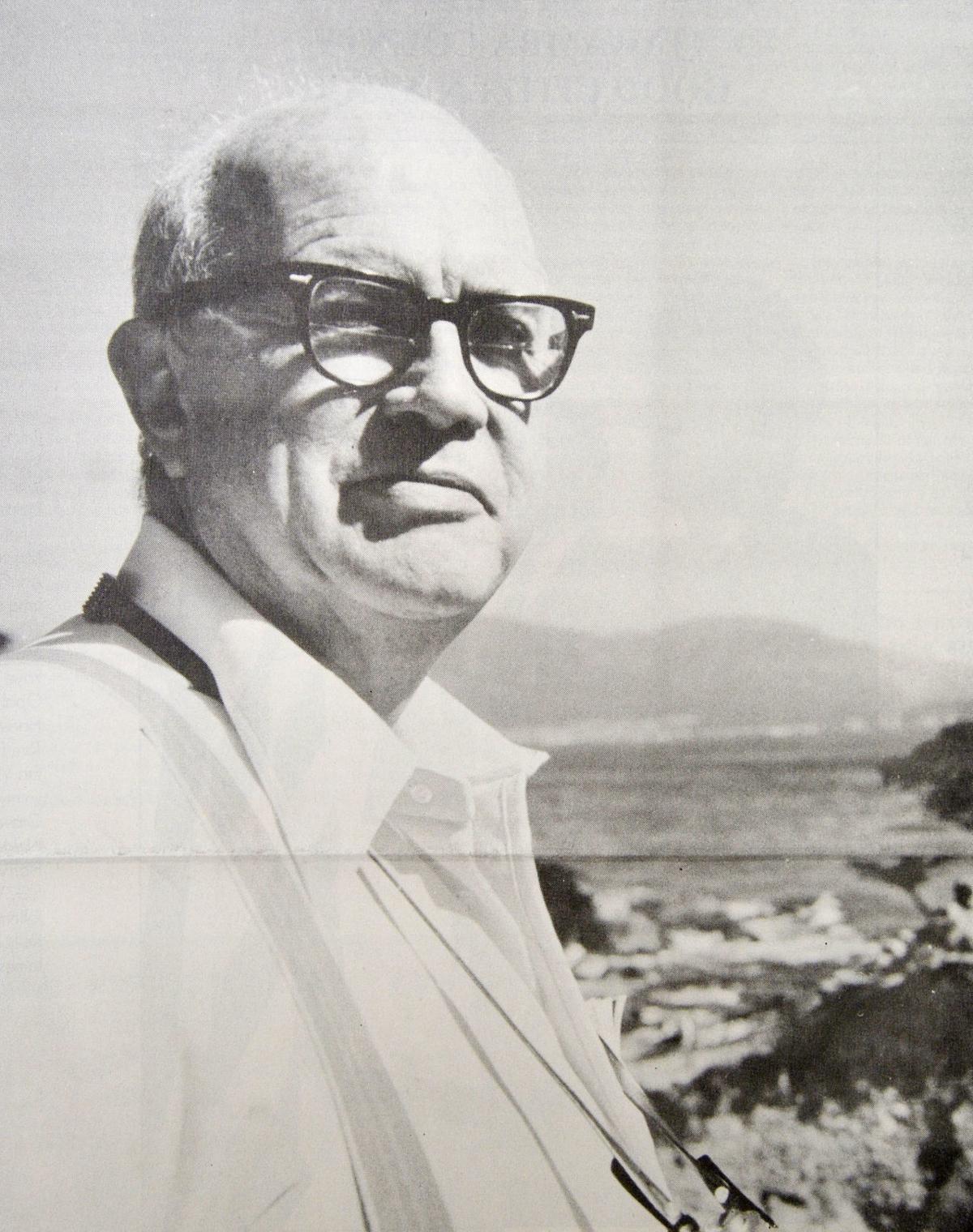 75 years ago, Delmus Harden purchased the newspaper that would become The Itawamba County Times. Harden and his partner published the first issue on June 21, 1945. Four months later, Harden became sole owner, editor and publisher of the paper. 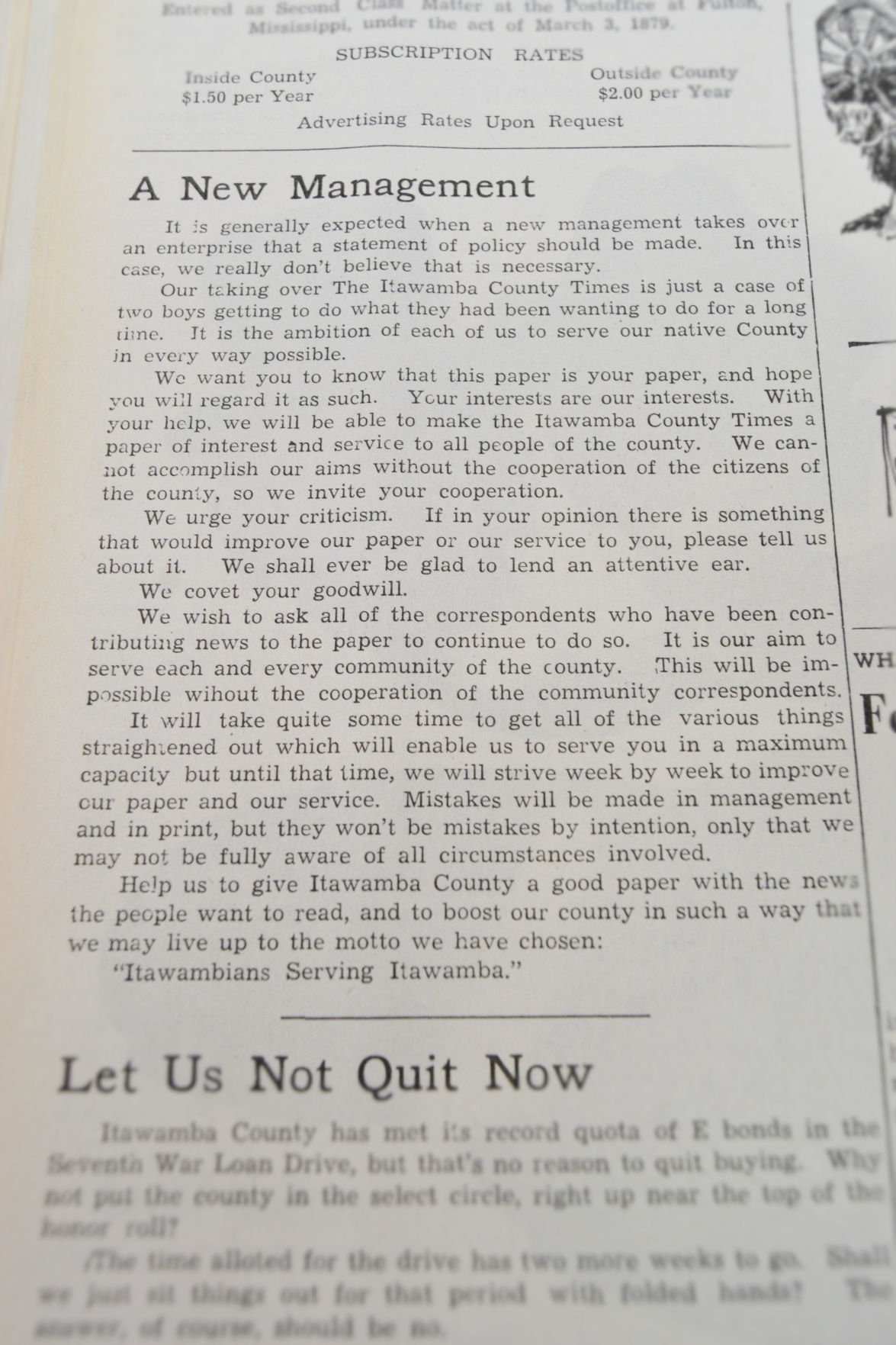 In his first editorial as co-owner, editor and publisher of The Itawamba County Times, Delmus Harden lays out his goals for the community newspaper. Years later, he told his daughter, Rubye Del Harden, the paper never belonged to him. It belonged to the people of Itawamba County.

75 years ago, Delmus Harden purchased the newspaper that would become The Itawamba County Times. Harden and his partner published the first issue on June 21, 1945. Four months later, Harden became sole owner, editor and publisher of the paper.

In his first editorial as co-owner, editor and publisher of The Itawamba County Times, Delmus Harden lays out his goals for the community newspaper. Years later, he told his daughter, Rubye Del Harden, the paper never belonged to him. It belonged to the people of Itawamba County.

“I don’t think anyone ever could love all the people of Itawamba County as much or as well as Delmus Harden did,” Rubye Del Harden, daughter of The Itawamba County Times’s founder, told the paper. “He was and still is the best example of servant leadership I have ever witnessed.”

“Our taking over The Itawamba County Times is just a case of two boys getting to do what they had been wanting to do for a long time,” Harden wrote in that first editorial. “It is the ambition of each of us to serve our native county in every way possible.”

He continued by saying his and his partner’s goal was to give Itawamba County a good paper, with news people wanted to read, and to boost the county in such a way that they lived up to the motto they had chosen: “Itawambians serving Itawamba.”

The business partnership between the pair dissolved four months later when Harden bought out Wright’s portion of the publication. Harden then became the sole owner, publisher, and editor of The Itawamba County Times.

Later, he coined the phrase that has rested beneath the title of the paper ever since: “The Only Newspaper in The World that Cares Anything about Itawamba County.”

In early 1955, that slogan caught the attention of D.W. Sherman, president of Consolidated Paper Sales, one of the nation’s top paper houses. Sherman wrote to Harden asking that he be furnished 150 mastheads of the paper. They were used in invitations to all his customers for the annual meeting of the American Newspaper Publishers Association at the Yale Club in New York City.

Harden was more than happy to furnish them but declined his invitation to attend.

“Although I don’t feel I can attend the party, the invitation is appreciated,” Harden wrote. “I feel sure that a lot of people who had never heard of Itawamba County, Mississippi have, through Mr. Sherman’s invitation, at least heard the name.”

Through the years, Harden received accolades from numerous newspapers and organizations across the state and the country, but his legacy was best recounted by his fellow Itawambians in the paper’s 50th Anniversary edition, published on June 21, 1995.

Harden’s employees described him as hardworking, understanding, and someone who lived by the golden rule.

The late H.A. Spencer worked for The Times for over 44 years. He described Harden as an understanding, empathetic person.

“I remember I had worked for him for two years and he let me off for three months to build my house,” Spencer said 25 years ago. “I appreciated that. I’ve been offered more pay to leave and go somewhere else over the years, but I’ve chosen to stay here. A man just don’t forget those things. Delmus treated everyone the way he wanted to be treated.”

Former Memphis Mayor Bill Morris worked for Harden at The Times for over five years. In his 2019 book, “A Legendary Life,” Morris described his former boss and friend as being very influential in his life.

“Delmus Harden was very special to me,” Morris wrote. “He was a strong spiritual influence and taught me the principles of honesty, integrity, and hard work.”

Harden’s business instincts reached far beyond his investment in The Times. He was a visionary and one of the first to recognize that Itawamba County was quickly progressing from being an agricultural-based county into an industry-based county.

In a 1995 interview, Basil Earnest recalled how one of their frequent coffee dates at the Sands Restaurant led to the reformation of the ICDC.

“One day, Delmus and I were having coffee, and he said we ought to the Itawamba County Development Council reorganized,” Earnest said.

Originally organized in the 1950s when Dura-Crates expressed an interest in coming to Fulton, the organization had fallen by the wayside.

“So, we scheduled a meeting and got a tremendous response,” he said. “In the next year or so Mueller Brass came to Fulton. If Delmus had not had the vision and if we had not been organized and ready, we could have easily lost out on this asset to Itawamba County.”

Earnest told The Times Harden looked to tomorrow, not just for himself and his family. He truly cared about the people of Itawamba County.

Harden’s youngest daughter, Rosa Lee Harden, recalled being in high school in the 60s when Itawamba County was the poorest county in the state, and yet had a paper that was considered to be among the best … if not the best … weekly publications in the state. The Times was publishing 24-plus pages a week and winning slews of awards.

“I will always believe that the reason for that was not that Daddy focused on building his business, but that he focused on building the community,” Rosa Lee Harden said. “He had a saying that his job was to build a community in which his business would flourish. So unless the meeting was on a Wednesday – deadline day – and sometimes even if it was, going to an ICDC meeting or hosting executives from a company thinking about moving a plant to Itawamba County, he was there.”

Delmus Harden was a one-man chamber of commerce for Itawamba County, according to Rubye Del Harden.

“One of his mottos was, ‘We must work together to create a county where our businesses cannot just survive but can thrive,’” she said.

He spent countless hours behind the scenes talking and planning with public officials and county leaders.

In 1976, John Haynes was considering purchasing The Baldwyn News after the sudden death of its owner. Haynes asked himself, who he trusted to determine a newspaper’s worth. The answer was Delmus Hardin.

It was the beginning of a 19-year association between the Baldwyn newspaper and The Itawamba County Times.

Haynes wrote in a 1995 article that Harden played an instrumental role in the Baldwyn News. When Haynes needed more efficient equipment after purchasing the paper and the cost was unattainable, Harden offered him the use of The Times’s equipment and allowed him to pay when he was able. The gesture was an important factor in bringing The Baldwyn News into profitability.

“It wasn’t until a number of years after Delmus’s death that I learned from an equipment salesman that he had offered to pay twice times the price for the equipment that Harden had sold to The Baldwyn News,” Hayes wrote in the 1995 article. “The equipment may be tarnished, but the memory of generosity serves as a constant reminder of Delmus Harden.”

The generosity Haynes spoke of reached far beyond Harden’s business deals. An ardent supporter of civic organizations, Harden was especially dedicated to the Lions Club. So much so, he and his wife Rubye’s 25th wedding anniversary was postponed because of a Lions Club meeting he did not want to miss.

Both he and Rubye Harden were so dedicated, she noted in the anniversary edition that she could recall only two vacations during their marriage that were not connected with a Lions Club or press convention.

Besides his commitment to the club, Harden loved supporting the youth of the county and their events.

“He loved the young folks of Itawamba County,” Rubye Del Harden said. “He believed in publicizing all the good things they did. Many of them saw him as their greatest encourager and supporter. He always made time to talk with them and lend a sympathetic ear. If they accomplished anything good, sports, 4-H, Scouting, academics, you name it-it was big news in his book.”

Sunday afternoons almost always meant a drive to a construction site, or a singing, or dinner on the grounds at a remote location, so he could take pictures for the next week’s paper, Rosa Lee Harden recalled.

“I was born into The Itawamba County Times family, which meant that all of Itawamba County was my family, because that’s how Daddy treated the whole county,” she said. “There was no birthday party too small, and no part of the county too far, no deer too small, for him to go and take the picture, usually dragging one or more of us along.”

Delmus Harden’s dedication to the community and his hard work has stuck with his daughters throughout their lifetime.

“Learning that from him has certainly paid huge dividends for Rubye Del and me in just about everything we have done,” Rosa Lee Harden said. “Rubye Del is an amazing community builder, adept at bringing people together to learn to be better leaders with her Success Skills business and to dance with the Dance Studio and All-Star Dance Camp, all built on that principle. And everything I’ve done – from being a pastor to hosting conferences and events – the idea of building community first has stuck with me.”

Delmus Harden’s work ethic and commitment to his community can be found in the thousands of pages published under his leadership. Whether the story he covered was a 600-gallon whiskey still being smashed by Sheriff Reese or a head of cabbage weighing over 18 pounds, Harden aimed to tell the stories of Itawamba County to the best of his ability. He believed he owed them that much.

“Once, I was answering the phone on a night when the paper was late coming off the press. Of course, everyone wanted to know when “their” paper would be ready,” Ruybe Del Harden said. “I turned to Daddy and said, ‘Don’t they know this is your paper?’

His reply, she said, was a definitive as a period: “Young lady, it’s their paper. Never forget that.”

As Harden told his daughter on that bustling night, one of hundreds he spent enfolded in the din of the printing press and the smell of ink, “If everyone doesn’t know it’s their paper, we aren’t doing a good job of publishing a community newspaper.”