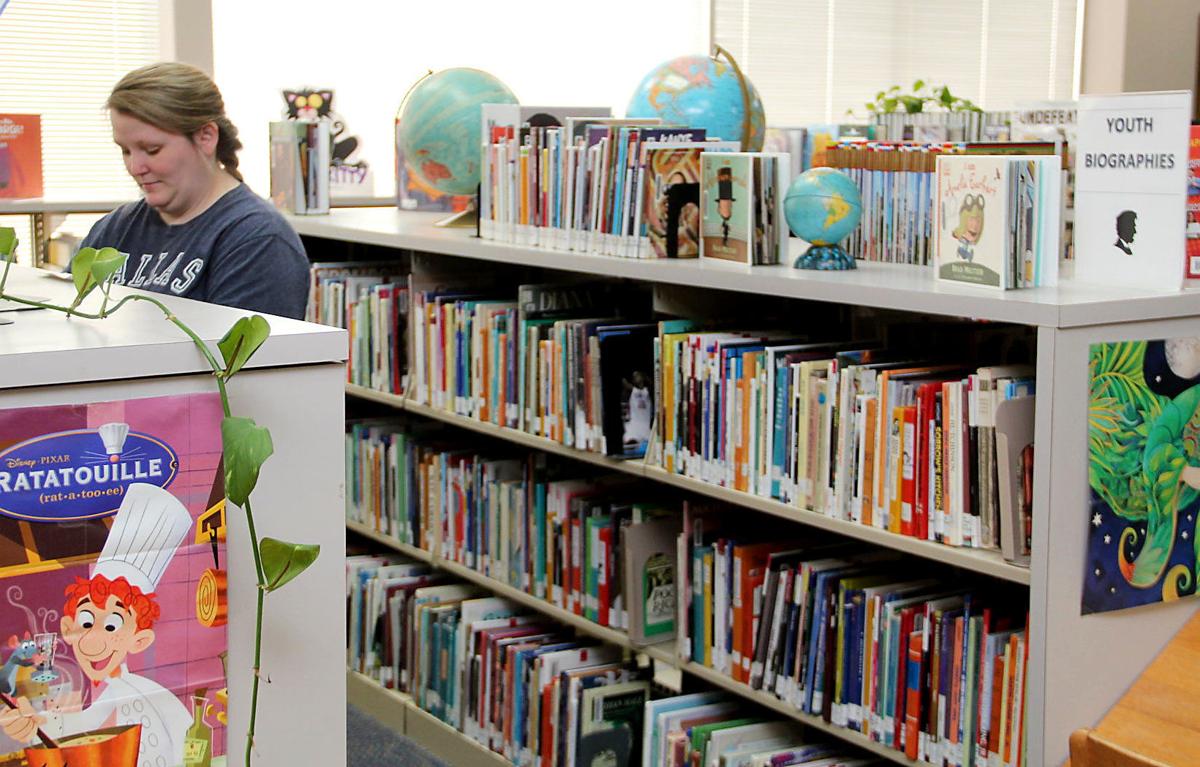 Library assistant Courtney Ables sorts through the children’s section at the Itawamba County Pratt Memorial Library. The library recently received a $10,000 grant from Toyota Motor Manufacturing Mississippi, Inc. The grant will be used to fund the interactive “Stem-in-Action” program. 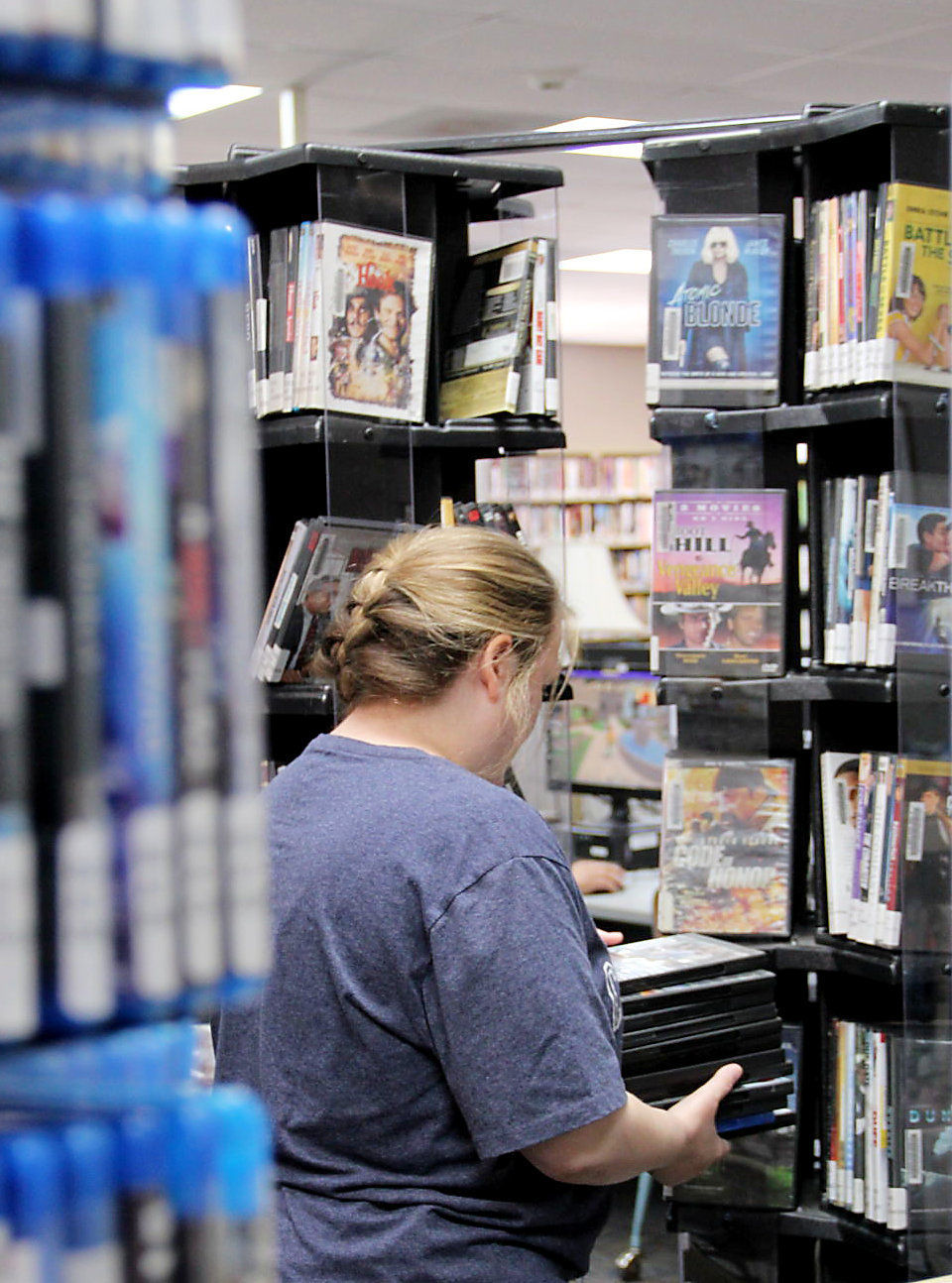 Ables shelves DVDs and Blu-ray discs among the library’s growing media collection. Adapting to changes in technology – following trends in how people consume information – has helped the library stay relevant.

Library assistant Courtney Ables sorts through the children’s section at the Itawamba County Pratt Memorial Library. The library recently received a $10,000 grant from Toyota Motor Manufacturing Mississippi, Inc. The grant will be used to fund the interactive “Stem-in-Action” program.

Ables shelves DVDs and Blu-ray discs among the library’s growing media collection. Adapting to changes in technology – following trends in how people consume information – has helped the library stay relevant.

Although it’s a building filled with the written word, it’s numbers that matter when it comes to funding for the Itawamba County Pratt Memorial Library.

Each fiscal year, head librarian Jeffrey Martin prepares the budget to present to both the City of Fulton Board of Aldermen and the Itawamba County Board of Supervisors. This year’s numbers show longterm, increased growth for the library.

“As we near the end of the year, circulation has continued to be quite strong in [2019],” Martin told The Times via email. “That’s remarkable when you think of all the technological advances that have occurred through the years.”

Martin expects both of these numbers to continue to grow.

“As for the year we are finishing up, it looks like the circulation of the physical collection is going to be really close to that of the previous year,” Martin said. “We have had over 50,000 items circulated with one month left to go on the year.”

Martin noted computer usage has gone up with over 6,500 computer sessions logged so far in 2019, a number that is already ahead of 2018’s number of 5,946. Electronic items such as electronic books and electronic AudioBook collections, which are shared with the Lee County Library, were numbered at 7,772 circulations last year. That number is expected to be higher at year’s end.

Martin said it’s adapting to change that has helped the local library maintain relevance in an increasingly digital world.

The use of high speed internet, apps and internet services for genealogy and job searches gives individuals reason to take advantage of more than just the latest best seller on the shelf, Martin said.

In July 2018, the library upgraded and significantly increased the speed of its internet connection by going to a fiber connection. The current speed for their connection is up to 100 Mbps upload and download.

“A few months ago, we were excited to learn of a way that library users could come into the library and print items directly from their phones,” Martin said. “This is done through a free app from the manufacturer of our printer that allows mobile devices to communicate with the printer.”

Signing up for a library card allows library users access to multiple subscription websites and online services. For those working on their family histories, the library offers access to the genealogy website HeritageQuest. Free access to Ancestry.com from within the library building is also available.

Access to the LearningExpress Library database for career seekers, test takers (ACT, GED, GRE) and people wanting to learn more about computers is also available through the library, both from within and outside its walls. The library began offering the database in October 2018 after receiving a subgrant from the Institute of Museum and Library Services Act and administered by the Mississippi Library Commission (MLC). Since that time, it has been accessed more than 500 times.

The library has access to 63 digital magazines using that platform, including popular titles like Better Homes and Gardens, National Geographic, Newsweek, and Reader’s Digest.

Martin said, along with funding from both the city and county, they are fortunate to receive grants that allow them to make the advances necessary to meet the growing need of the public.

“We are pleased to announce that we received a $10,000 grant from Toyota Motor Manufacturing Mississippi, Inc., to start a program we are calling STEM Story Time,” Martin said. “[Toyota] has been a great partner; it’s been great to have them in our area.”

STEM refers to the curriculum that emphasizes Science, Technology, Engineering and Mathematics. The program takes a STEM-based hands-on approach to the traditional story time model. Ideally, it blends literary arts and science.

“For example, if we happen to be talking about bears in a given week, we will talk about the types of bears, their habitat, what they eat, and other characteristics of the animal in addition to reading some fun, fictional books with bear characters,” Martin said. “We will also do a fun craft or building projects each week that will allow the children attending to use their creativity and some early STEM skills. We plan to gear these story times toward children between the ages of 3 and 10.”

“The grant will allow us to bring in several “STEM-in-Action” speakers intermittently throughout the year to show attendees ways that STEM can be applied to our lives in fun and interesting ways,” Martin said.

The library’s kickoff even will be Tuesday, Oct. 1 at 4 p.m.

The library will continue with STEM Story Times with the library staff each week thereafter with Stem-in-Action speakers featured once a month in the weeks ahead.

“Cute and Creepy Animals” will be second STEM-in-Action speaking event scheduled for Tuesday, Oct. 29, at 4 p.m. prior to Fulton’s “Scare on the Square” Halloween event.

Martin said the goal with this program is to encourage both childhood literacy and an early interest in gaining STEM skills that are paramount to life today and are likely to have an even greater role in the future.

OUR OPINION: Adapting to change will help us thrive

Mississippi can be famously, or infamously, slow to change. Depending on who you ask, this s…