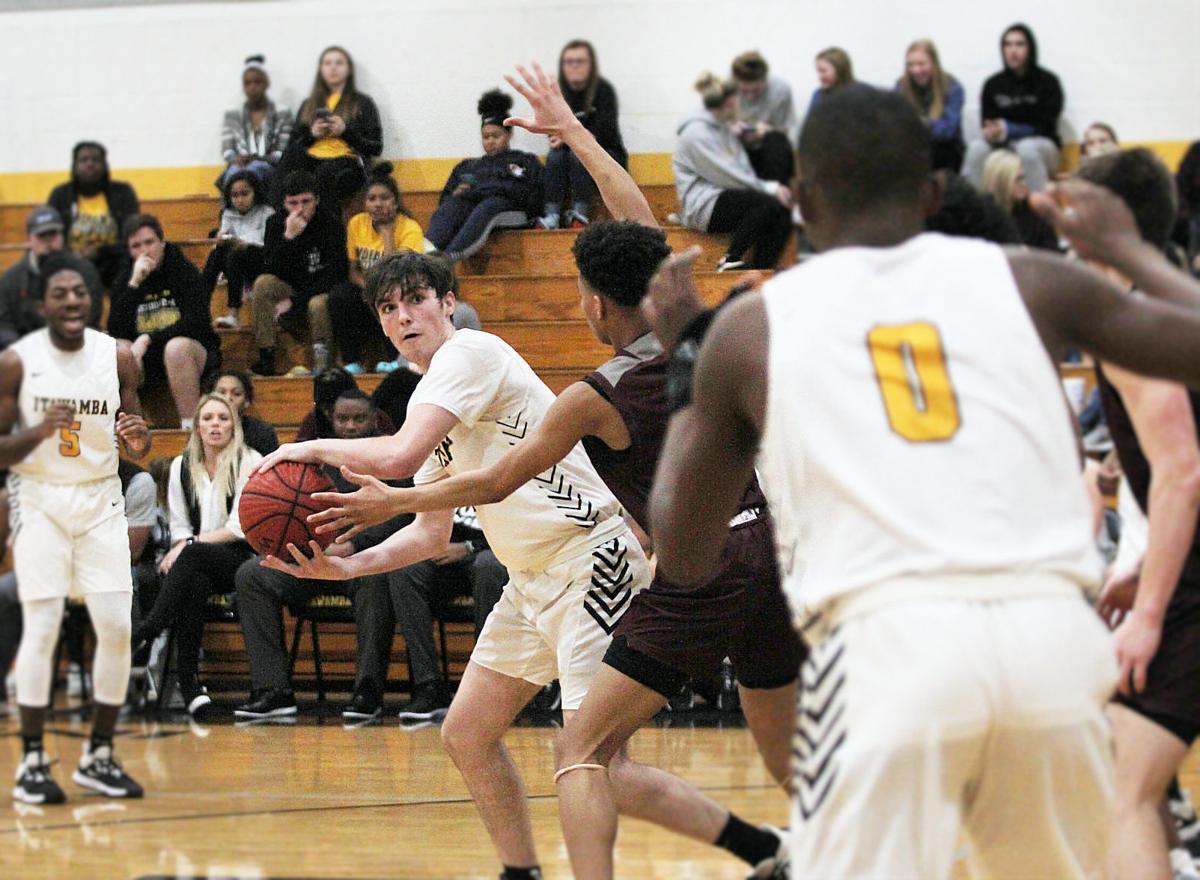 IAHS junior Caden Prestage finds freshman Issac Smith who drove down the baseline for a shot during the second half of IAHS’s game against New Albany, last Monday in Fulton. 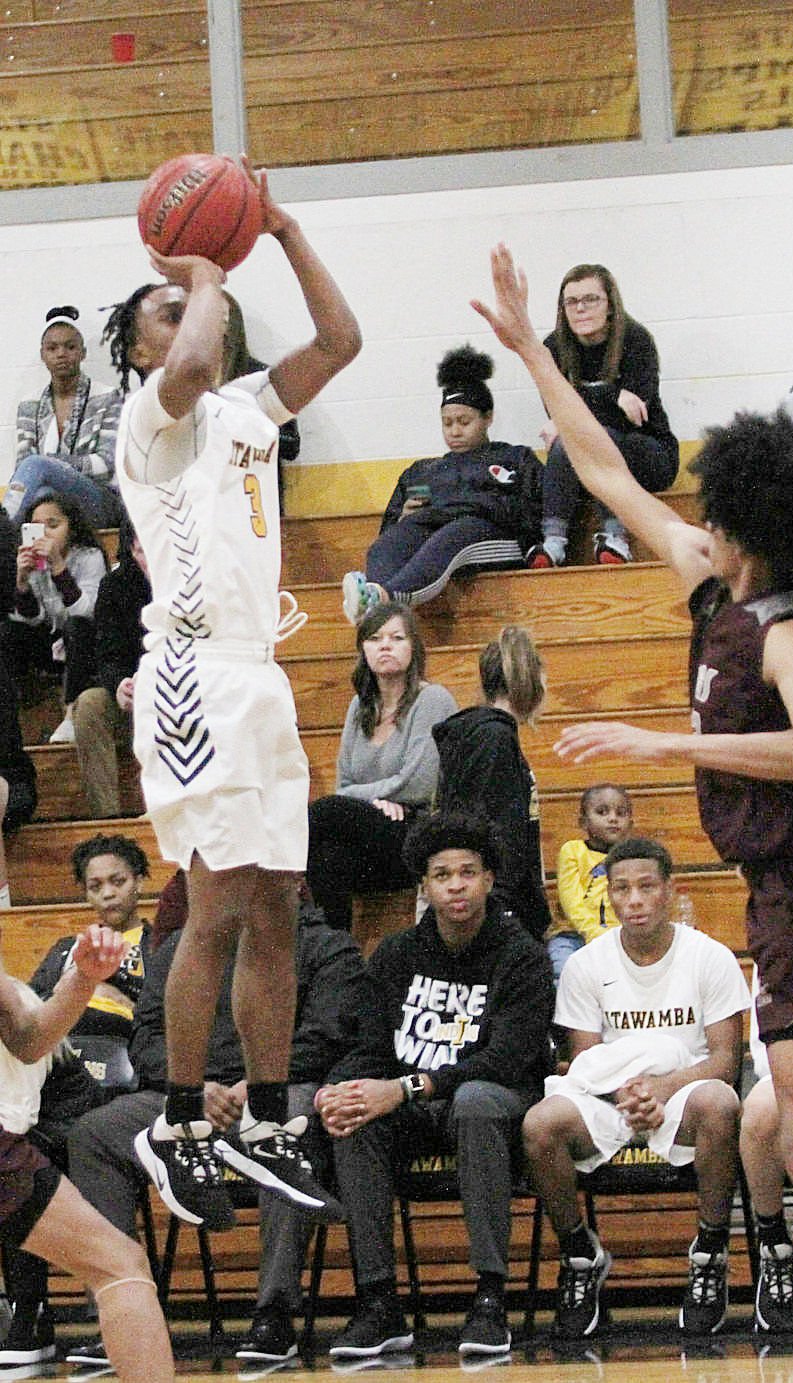 IAHS senior point guard Deion Shells shoots and scores two of his 13 points in last Monday’s loss to the Bulldogs.

IAHS junior Caden Prestage finds freshman Issac Smith who drove down the baseline for a shot during the second half of IAHS’s game against New Albany, last Monday in Fulton.

IAHS senior point guard Deion Shells shoots and scores two of his 13 points in last Monday’s loss to the Bulldogs.

The Itawamba Agricultural High School basketball teams hosted New Albany High School in a game originally scheduled for back in November but postponed by both teams because of football playoffs.

Defense dominated the opening quarter of play of the Lady Indians’ game against the Lady Bulldogs. New Albany held a slim 6-5 lead after eight minutes of play.

The Lady Indians struggled inbounding the ball in the second quarter, and by the break, the Lady Bulldogs had stretched their lead to 31-15.

The second half opened with a steal and layup from IAHS sophomore Zakiyah Adams. The Lady Indians found some offense and, with defense that limited New Albany’s second chance points, made up some ground on the Lady Bulldogs. But New Albany was hot from beyond the arc, and by the time the final quarter rolled around, the Lady Bulldogs led 45-36.

The Lady Indians got within 3 points when Shumpert found sophomore Tonya Warren open for a 3.

IAHS wasn’t able to make up the ground lost in the second quarter, and the Lady Bulldogs won 59-52.

Shumpert led the Indians with 18 points, including five 3-pointers and 15 points in the second half. Warren scored 15 points and was a perfect five-for-five at the free throw line.

The Indians couldn’t slow down the Bulldogs offensively in the first, and by the quarter’s end, New Albany led 17-11.

IAHS opened the second quarter with a scoring drought that lasted more than three minutes. It ended when junior Caden Prestage hit back-to-back 3-pointers to get the Indians within 10 points of their opponents. The Indians trailed the Bulldogs 35-24 at the break.

The third quarter was a combination of good defense and a hot-handed offense by the Indians. The quarter ended with Prestage and senior Chandler Wood hitting back-to-back 3-pointers to get IAHS within a single point. With eight minutes left to play, New Albany led 45-44.

Early in the fourth, IAHS took a 46-45 lead on a 2-pointer by senior point guard Deion Shells, but the game, in large part, came down to free throws. Both teams hit the bonus with over six minutes left in the game. Not that IAHS missed a bunch of free throws, but New Albany shot more of them. The Indians were five of seven at the line; the Bulldogs were 12 of 15. New Albany won 63-56.

Prestage led the Indians with 16 points. Half came in the second quarter. Shells scored 13 points and Wood added 9 points.

IAHS opens 2020 with a couple of wins

The Indians jumped out to an early lead and never lost it. They picked up their first Division 2-4A win of the season. At 1-2 in division play, they sit in a tie with Mooreville for fourth place.

Like the guys, the ever-improving Lady Indians got an early lead and didn’t let it slip away. The team picked up their first win of the season in their match against Caledonia. Their 2-1 record in 2-4A has them in a tie for second place early in division play.

Indians defeat Vikings for another win

The team picked up its second win in as many days in the game against the North Pontotoc Vikings. Their 49-37 victory puts them at 2-2 in division play.