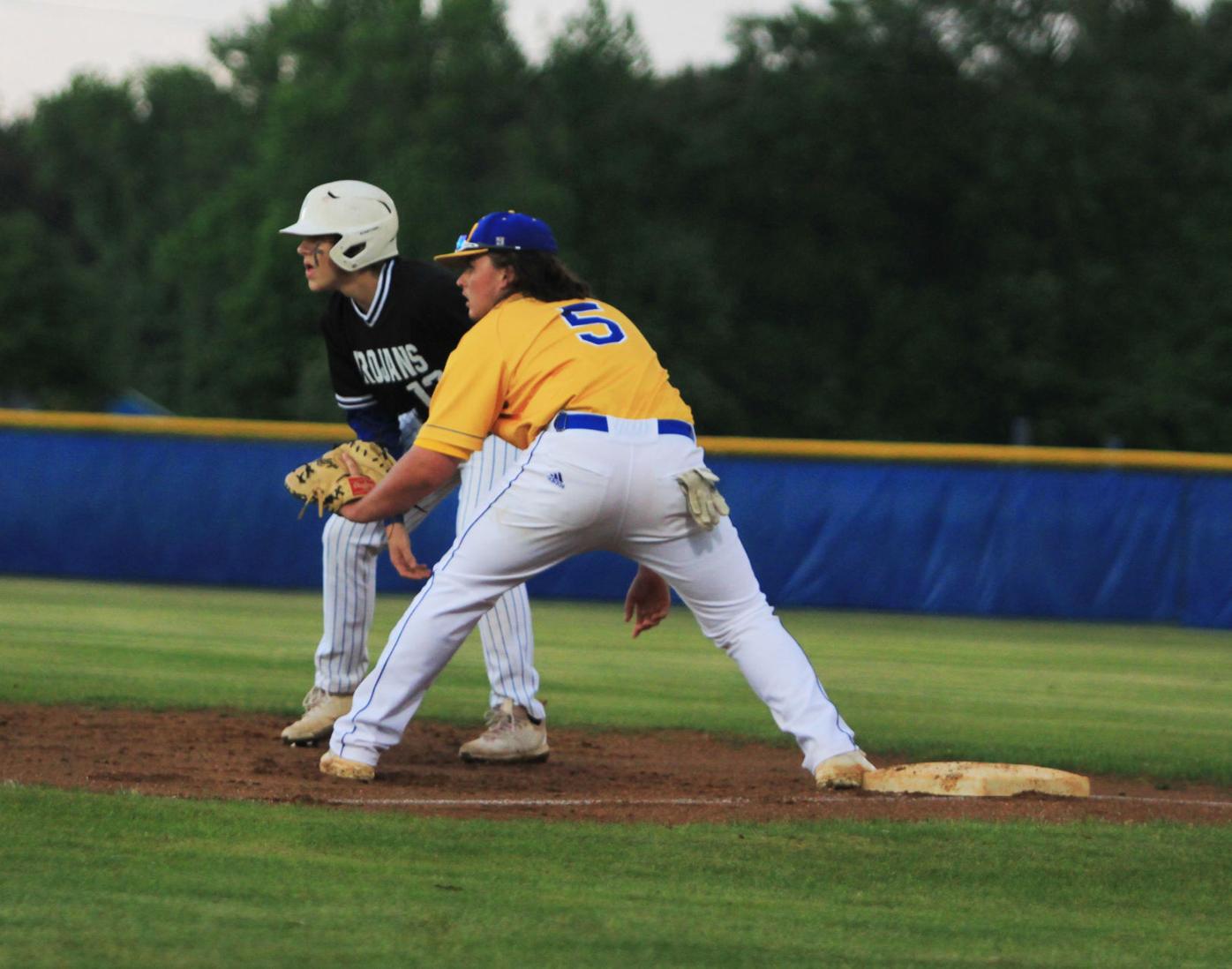 Mantachie first baseman Cooper Guin holds a Bruce baserunner at first base during the first inning of the Mustangs’ playoff game against Bruce last week. 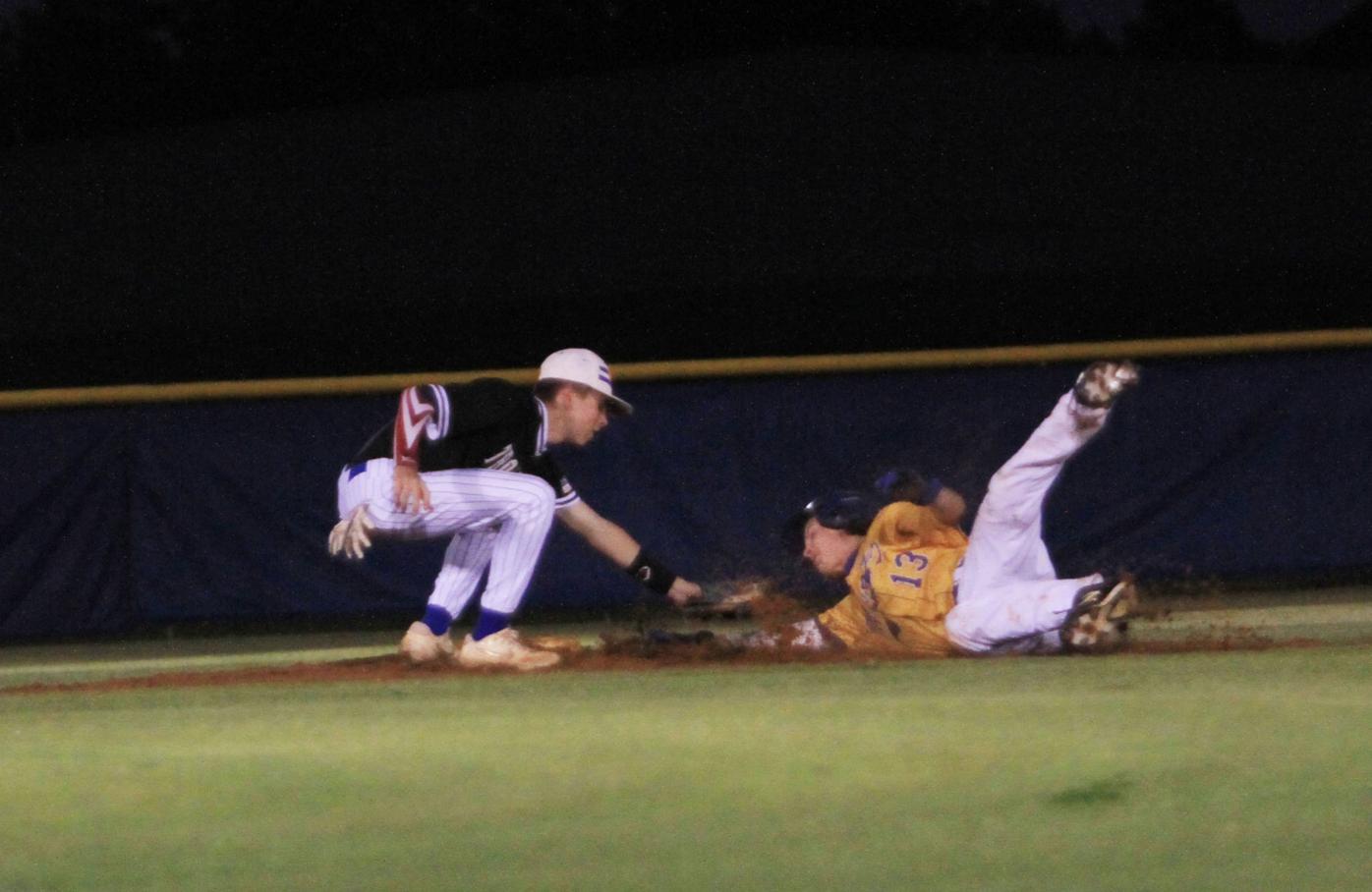 Mantachie’s Greg Raper was called out on a close throw at second base during a steal attempt during the second inning of the team’s home loss to Bruce last Thursday.

Mantachie first baseman Cooper Guin holds a Bruce baserunner at first base during the first inning of the Mustangs’ playoff game against Bruce last week.

Mantachie’s Greg Raper was called out on a close throw at second base during a steal attempt during the second inning of the team’s home loss to Bruce last Thursday.

Two weeks ago, the Mustangs routed Pelahatchie in the first round and drew the Trojans in the second. Mantachie (12-15) opened the series at home last Thursday.

The Trojans jumped out to a quick 7-0 lead in the top of the first inning. The Mustangs held the visitors scoreless over the next two frames but were unable to score themselves.

The Trojans added six runs in the fourth inning. Mantachie’s offense came to life in the home half of that inning. With a full count, junior J.W. Franks singled to center field. Freshman Bryson Ford then hit a double, but Franks was out at home on a laser relay throw from the Trojans’ second baseman. With two outs, freshman Greg Raper and senior Ross Simpson hit back-to-back singles. Ford scored on the latter’s hit for the team’s only run of the game.

Raper led Mantachie with two hits. Ford, Franks, Simpson and sophomore Cooper Guin each had a hit and Simpson the lone RBI.

Coming on in relief during the first inning, senior Mac Gentry pitched two innings and gave up one run on two hits with three strikeouts and two walks.

Friday evening, the team traveled to Bruce. The Mustangs had to win to keep their season alive.

Down 1-0 heading into the third, Mantachie took their first lead of the series, and the inning was capped with a three-run home run from senior catcher Patrick Mangels.

The Trojans responded by scoring two runs in the home half of the inning, but the Mustangs held a 5-3 lead moving to the bottom of the fifth. Bruce struck for four runs in the frame and held on for the win to end the Mustangs season.

Mantachie head coach B.J. Cox praised his team for their response to the many challenges faced this season.

“This year’s team battled through lots of adversity and unexpected circumstances,” Cox said. “The entire team grew as a whole and really learned what it meant to battle until the very last pitch.”

The loss meant the playing days for this year’s seniors, including Ross Simpson were complete. The loss stung, but Simpson chose to focus on the positives and the future.

“I would like to congratulate my team on a great year and to thank Coach Cox for all he has done to get us to where we ended. We could not have gotten that far without his leadership,” Simpson said of head coach B.J. Cox. Simpson looks forward to the future for Mantachie’s program. “I will always proudly represent and support the Mustang baseball team. I can’t wait to come back for future seasons.”

Mangels hopes that his example encourages his younger teammates to "first and foremost play for God, and give him your all."

Mangels thanked his teammates and supporters for their continuous support.

"To my teammates and family and friends thank you for always supporting even when we were down you never gave up hope on us."

With a final bit of advice from the soon to be graduate, Mangels reminded his teammates to "encourage each other every step of the way."

According to Cox, it was the willingness of players to play for the team that brought the Mustangs success this season.

“We had several guys that stepped up and filled roles and overall it was a team effort the entire year.”

The graduating seniors will leave holes for Cox to fill in the lineup, but he has a group of young players that can continue the team’s upward trajectory.