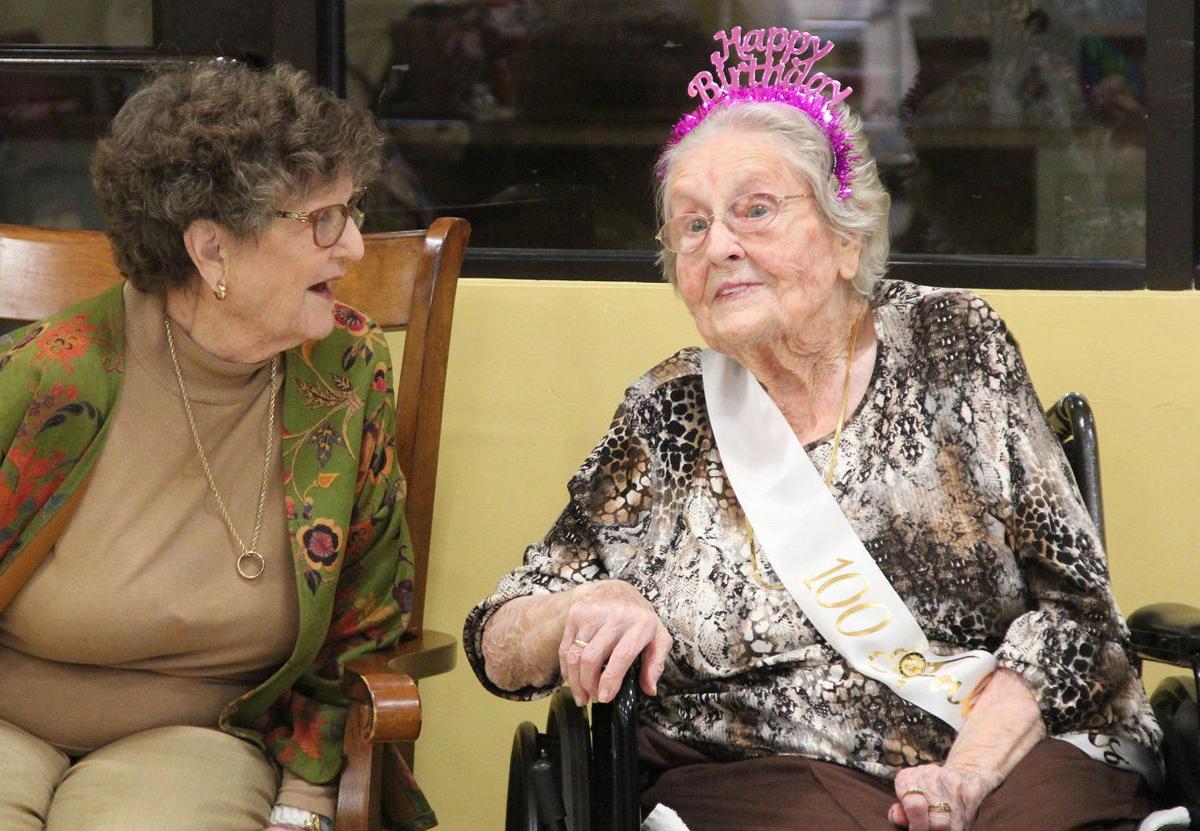 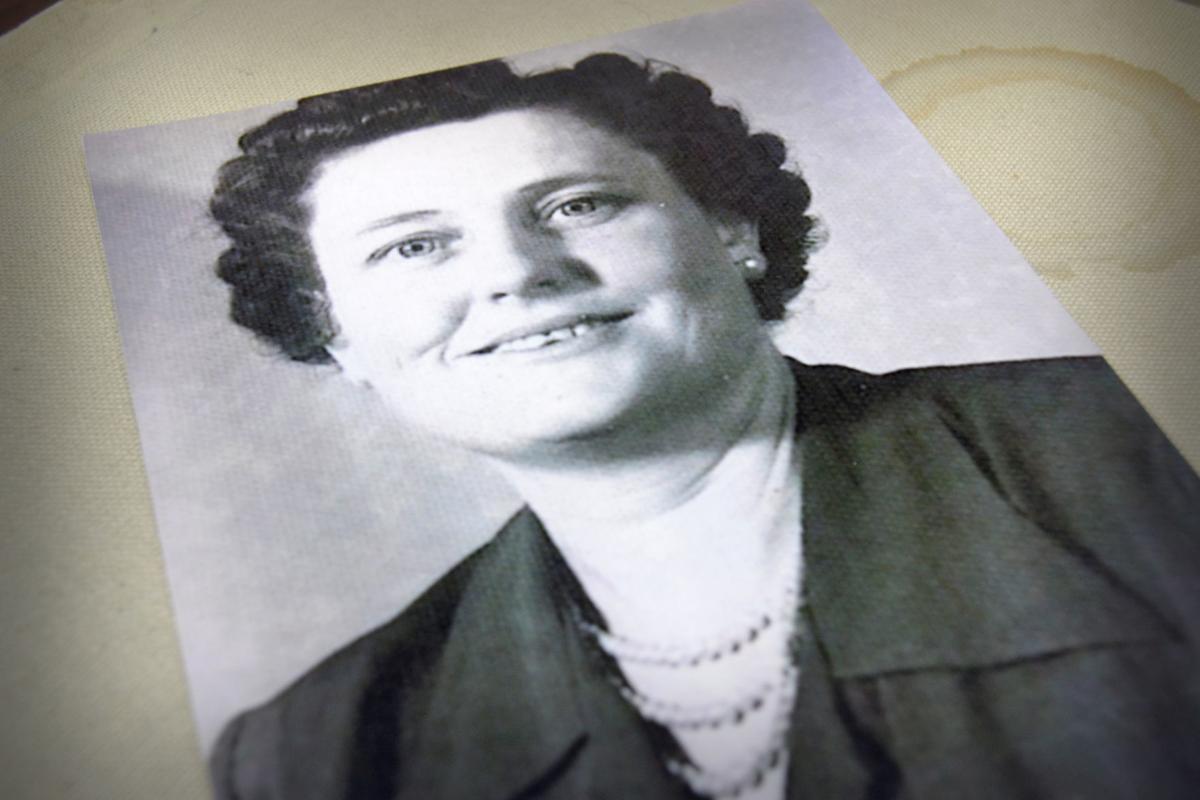 Although Eunice Page Quinn doesn’t care for attention, her family says the centenarian is quite the storyteller when not under the spotlight. Often peppered with both wit and wisdom, she shares with them tales of good food, hard work and young love.

Although Eunice Page Quinn doesn’t care for attention, her family says the centenarian is quite the storyteller when not under the spotlight. Often peppered with both wit and wisdom, she shares with them tales of good food, hard work and young love.

Page is not really her middle name. It’s her maiden name.

Eunice Page Quinn often jokes that she had to get married to get a middle name. She wasn’t given one at birth.

Delivered at home on Feb. 4, 1920, in Tishomingo County, the Charleston Place resident recently celebrated her 100th birthday. Surrounded by family and friends, the joyous occasion included singing a few tunes of days gone by. She and her duet partner, the popular local television personality Kay Bain, crooned a verse or two from a 1927 classic: “Oh, we ain’t got a barrel of money, maybe we’re ragged and funny, but if you travel along singing a song, side by side.” The pair belted out the tune at the top of their lungs, missing only a few beats.

With keen wit and wisdom, Quinn speaks candidly about growing up in the 1920s and ‘30s. Back then, the only barrels her family had were filled with lard from the hogs they had slaughtered. Money was scarce, and times were tough, but that was just life, according to the centenarian.

While the Great Depression was wreaking havoc on much of the country, Quinn said it wasn’t as monumental to her family as it was to those distant places.

“We didn’t know there was one,” she said with her signature mix of wit and wisdom. “We all lived the same way. We worked hard and everyone was in the same boat.”

Her parents’ small farm produced ample food to sustain their family. Her mother sewed the simple flour-sack dresses she wore to school. She owned only two. Quinn would alternate between them when it came time to do the laundry. Once a year, the family traveled to town by wagon to purchase goods like flour, coffee and sugar.

Quinn recalled on one outing, she cried for a 10-cent ball while the family made their purchase. Her father couldn’t afford to buy it. The memory is her only recollection of disappointment during those days.

Outside their yearly trip, the family often bartered for supplies from the peddler’s wagon.

“He came through every Thursday,” Quinn said. “My mother would trade the peddler eggs or milk for whatever the family needed. He had a cage filled with chickens on the back if chickens were what you were looking for.”

Her father, or Papa, as she fondly called him, raised the hogs that provided meat for the family.

“Papa would sell one ham, and the rest of the meat was kept in the smokehouse for our meals,” she said. “We ate better back then than we do now.”

There wasn’t extra money for luxuries like candy or toys, but there was one time, Quinn recalled, when the mailman brought samples of tasty chocolate to everyone’s mailbox. After discovering the luxury, Quinn and her niece, Jewel Page Edmundson, decided that it was so good it merited the two preschoolers roam from house to house asking neighbors for their delectable treats. Since most of them were relatives, they delighted in seeing the happy faces of the youngsters who rarely got store-bought candy and consented to share.

It wasn’t long after consuming many of the small squares that the girls discovered the mailman’s delivery was the latest sample in a test trial for Ex-Lax.

“It was a very moving experience,” Quinn said with a snicker. She still speaks of that childhood shenanigan with a bit of a mischievousness in her blue eyes.

Edmundson wasn’t Quinn’s only pal growing up. Her favorite pet was a crow she named Polly. Jet black like any other old crow, Polly’s wings were clipped so she wouldn’t fly away. Quinn fed the bird corn, and it would hurriedly come running to her. That is, until Polly pecked away at the family’s chicken population.

Since the chickens were a part of the family’s livelihood, Quinn said her papa wouldn’t have it. That was the end of Polly.

When the children’s birthdays rolled around, Quinn’s mother would cook a cake. She said they typically celebrated birthdays the same way they celebrated most every other day – by working in the fields.

At Christmastime, Santa would leave the siblings an orange and a stick of candy. One Christmas, Quinn got a doll.

There was no high school nearby, so Quinn’s education ended in the eighth grade. Her father declined her request to move into a boarding school in Iuka where she could complete school and graduate.

It wasn’t long until she bumped into a young man visiting his aunt in a small community called Spruce Pine. Quinn said, without hesitation, it was hardly love at first sight. But her fondness for John Edward Quinn grew as the two continued to run into each other.

After their first kiss, she thought their relationship was over.

“My daddy always told me, ‘If a man commenced to kissing you, they’ll be done with you,’” she said. “I cried all night after Edward kissed me.”

Turns out, her father was wrong. That kiss turned into a lifelong commitment.

She married Edward Quinn at the tender age of 16. They had five dollars between them, and a portion of that went to the preacher who performed their nuptials.

The couple lived with family immediately after their marriage. Edward was only home for one day before he had to return to Civilian Conservation Corps Camp. He was gone for a week, returned home for a bit, and then gone for an additional three months.

Through the years, Edward and Eunice Quinn added four children to their family: Janette, Larry, Rick and Vickie. Eunice Quinn chose the life of a stay-at-home mom. Her daily tasks – cooking, cleaning, tending the garden and working in the fields – began at the crack of dawn each morning and went past sunset. .

If the Quinn children used the word “bored,” it would land them squarely in the hands of double chore duty. Idle time was not permissible.

Her daughter Vickie recalled waking up every morning to the smell of bacon and sausage. Her mother taught her how to put a full meal on the table by the time she was 11 years old.

At lunchtime, the family gathered around the table for a hearty meal. Cornbread was always on the menu. When the midday meal was done, they spread a large tablecloth over the food until the family returned in the evening for supper.

“The food didn’t ruin back then like it does now,” Quinn said. “And we all sat down at the table together for every meal.”

She added, “We ate better back then than we do now.” She’s adamant about that.

The family’s days started with milking the cows. Quinn said her son, Larry, could milk a cow faster than anyone she’d ever seen.

“Foam would be pouring over his bucket before I could even get started good,” she said with a mix of pride and envy.

Larry Quinn recalled milking the cows was just one of the siblings’ many chores. The family had chicken houses, and every morning they would gather eggs from some 2,500-plus birds.

“We got one cent for every egg,” Eunice Quinn added to her son’s recollection.

While Eunice Quinn and the children tended to daily chores, her husband focused on their cotton, corn and soybean crops. He became a highly successful farmer and home builder, despite having stopped his formal education in the fourth grade to help provide for his younger brothers and sisters. His successes also included owning the first cotton picker and one of the first tractors in Tishomingo County.

In the early years, his hard work earned him Farmer of the Year through their local extension service. But a bizarre and harrowing accident would prevent him from stepping on the stage at a prominent Memphis hotel to receive his honor.

Excited about attending the awards dinner, Edward and Eunice Quinn climbed on board the hotel elevator with several other couples who were being honored. They didn’t realize the elevator was overloaded. It plummeted eight floors, seriously injuring all its occupants.

The couple refused to join the class-action lawsuit against the hotel. It wasn’t in their character to do so. Eunice Quinn suffered lifelong back problems because she was leaning against the elevator handrail when it crashed.

Rarely, if ever, daunted by their circumstances or the hand life has dealt them, the Quinns continued spending long hours working hard and gathering around the family’s table.

After raising four children and spending near five decades together, Edward Quinn died in 1984. Although now a resident of Charleston Place, Eunice Quinn still owns the home she and her husband built together in 1961.

A quiet soul by nature, Quinn doesn’t care for attention. She is, however, quite the storyteller when not under the spotlight. Her stories are full of wit and peppered with wisdom. They are stories of tough times and hard work, stories of a little girl who loved chocolate and a mother who taught her children the value of a hard day’s work.

They’re the stories of Eunice Page Quinn, who married the man who kissed her and finally got a middle name.