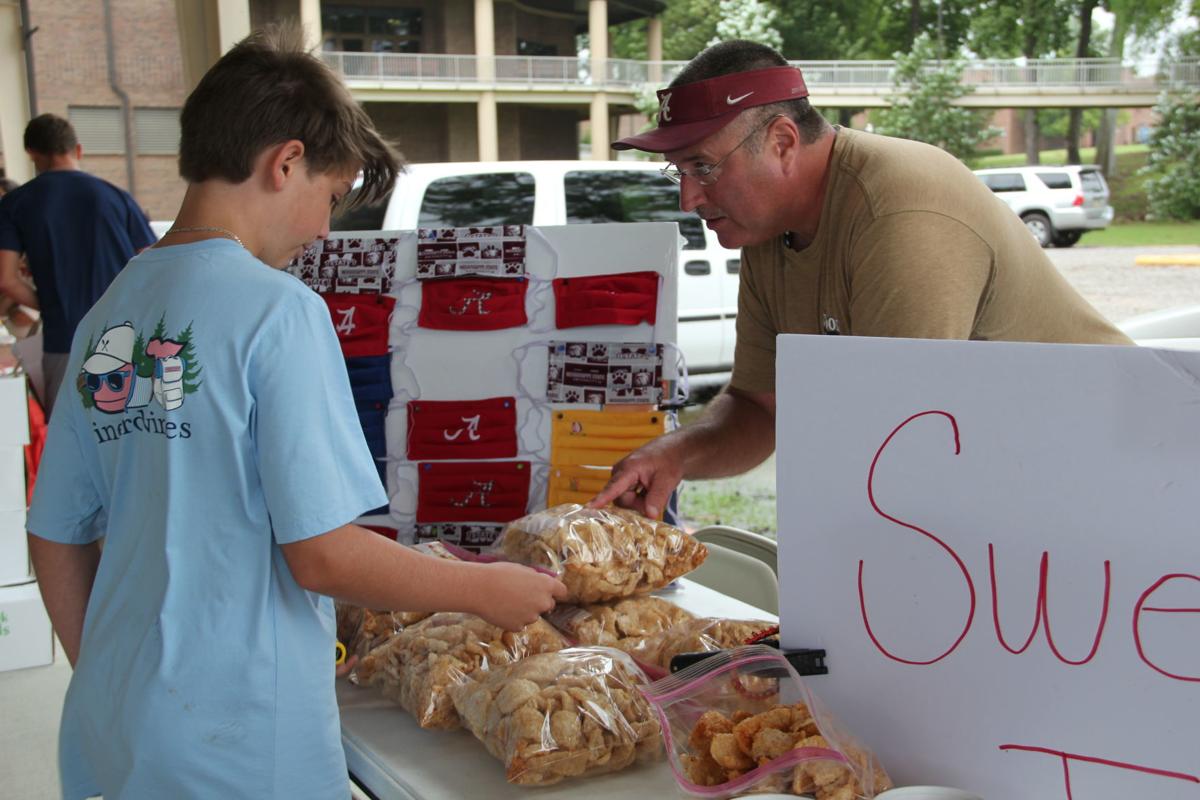 Garon Roby, owner of The Buzzard Roost roadside/farmers market stand, talks up his selection of homemade pork rinds with a potential customer during a recent Fulton Farmers Market. Patrons visiting Roby's stand can enjoy his seasoned pork skins, a glass of sweet tea and a bit of wisdom passed on by his granny. 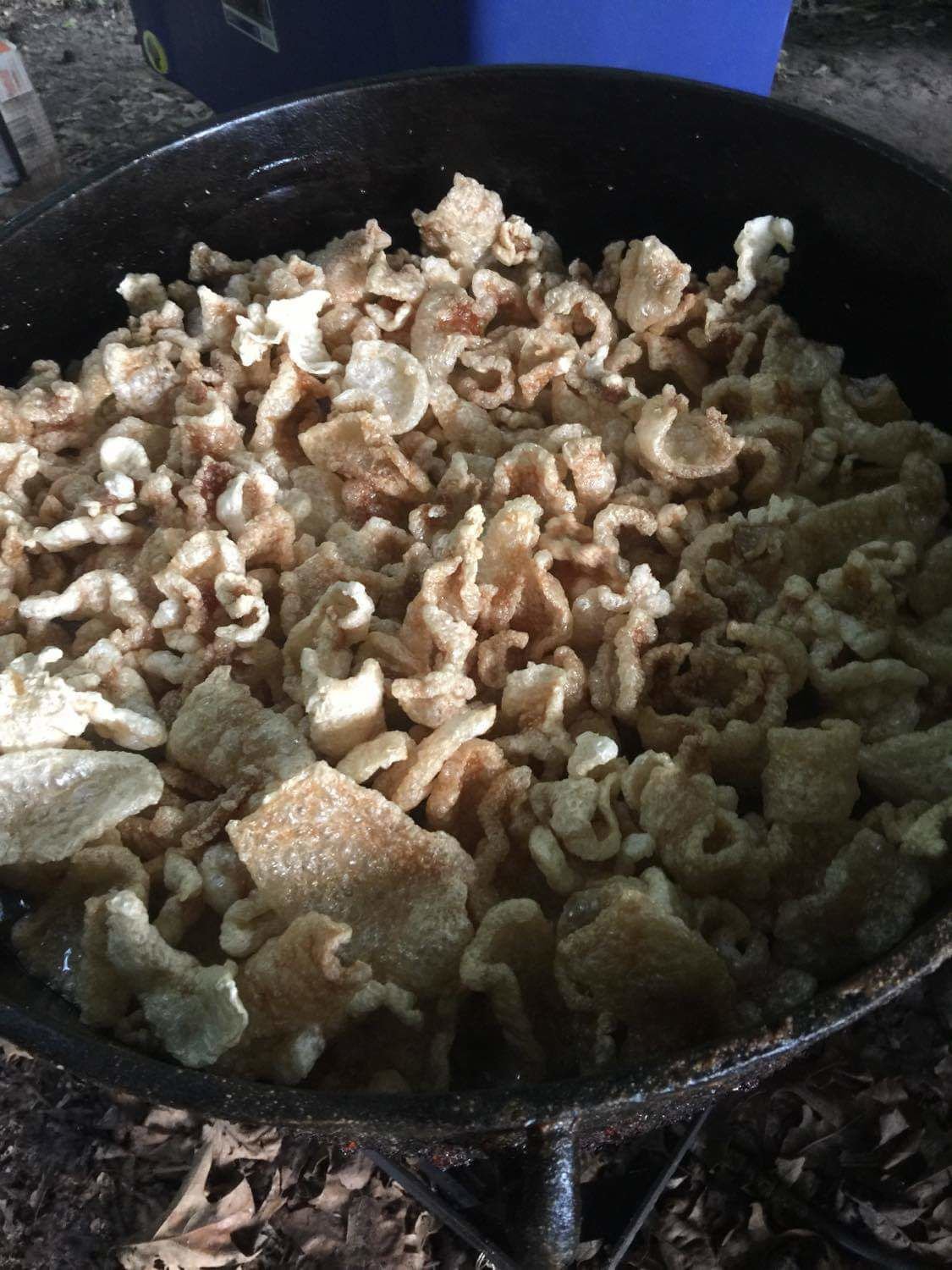 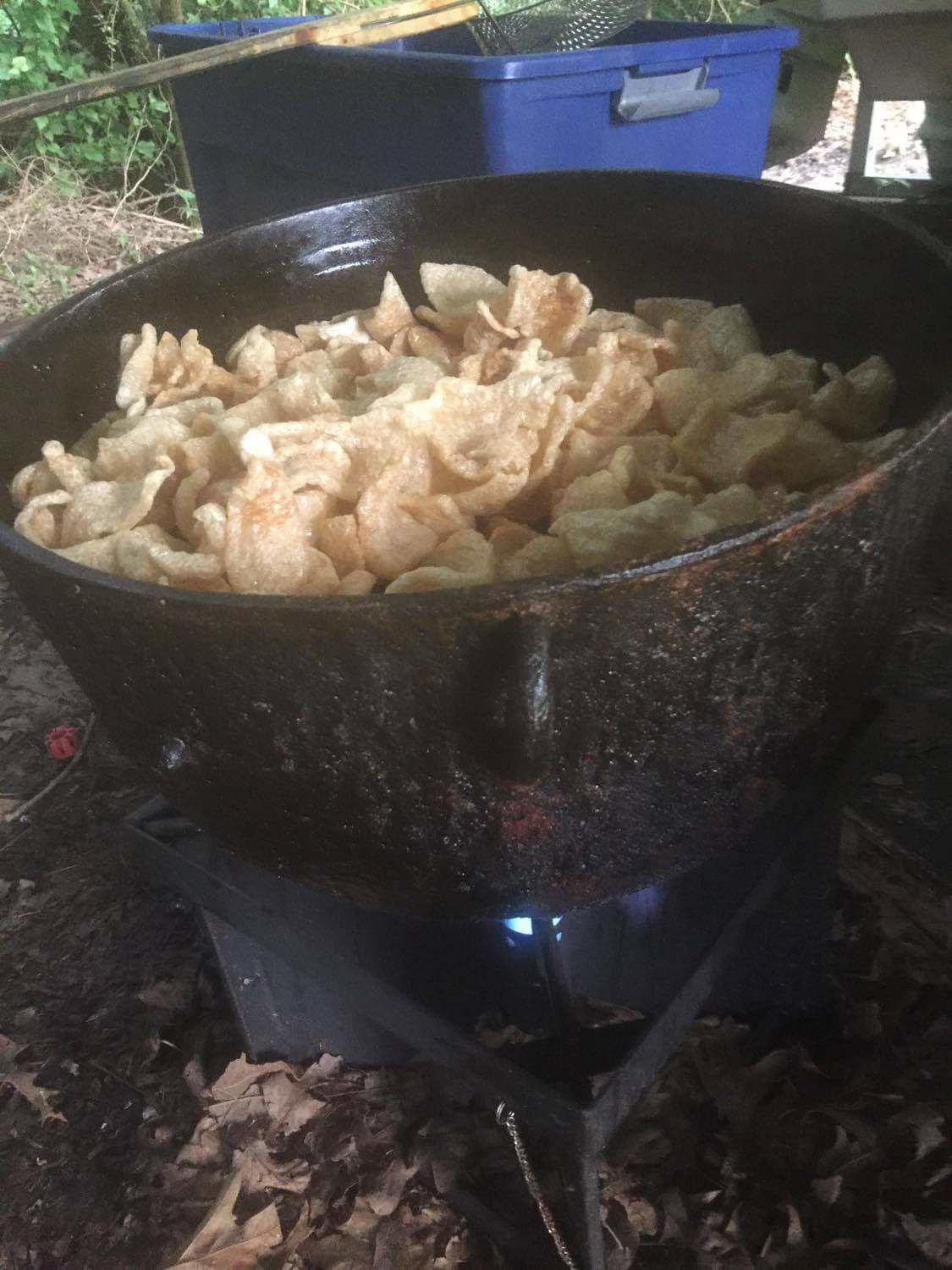 Roby cranks up the heat to 400 degrees and cooks his pork rinds in a 100-year-old pot he says he bought off an old-timer. 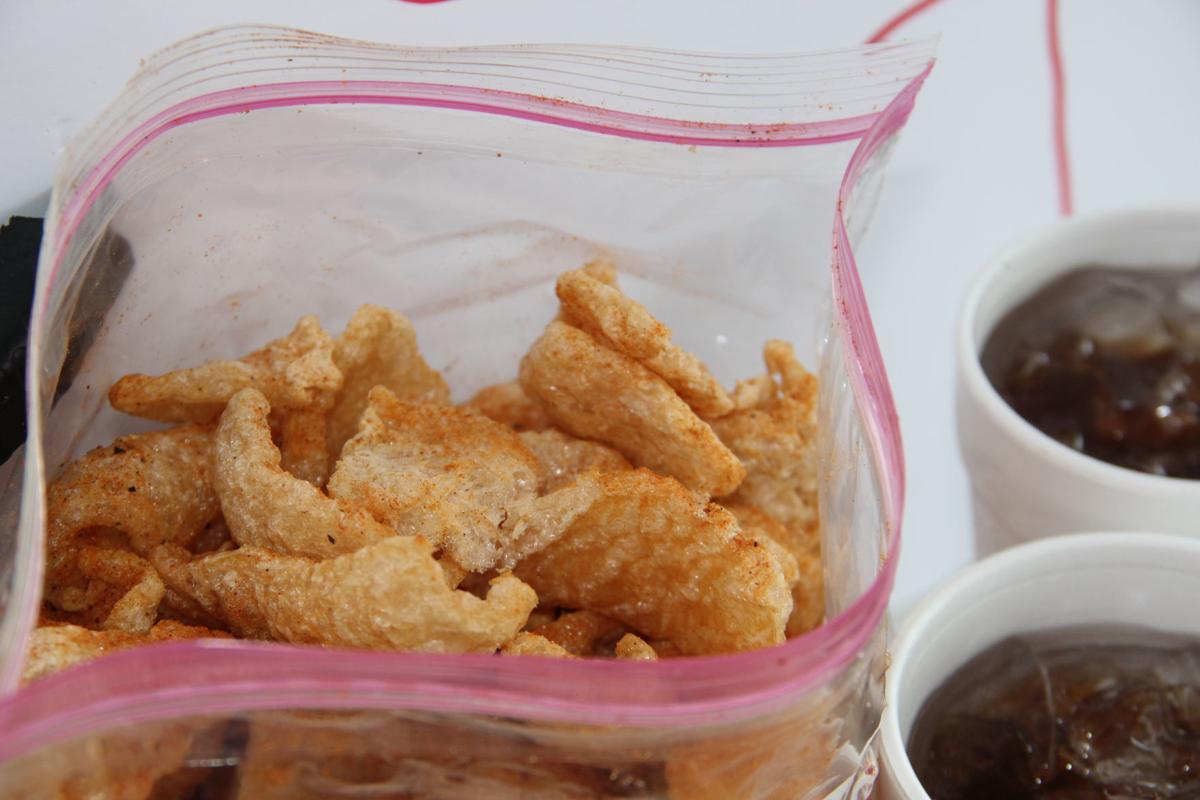 Roby makes all the special blends of seasonings for his pork rinds himself. Plain and barbecue are his big sellers.

Garon Roby, owner of The Buzzard Roost roadside/farmers market stand, talks up his selection of homemade pork rinds with a potential customer during a recent Fulton Farmers Market. Patrons visiting Roby's stand can enjoy his seasoned pork skins, a glass of sweet tea and a bit of wisdom passed on by his granny.

Roby cranks up the heat to 400 degrees and cooks his pork rinds in a 100-year-old pot he says he bought off an old-timer.

Roby makes all the special blends of seasonings for his pork rinds himself. Plain and barbecue are his big sellers.

“The secret is letting it steep for one hour,” Garon Roby said as his sweet tea splashed from the dispenser to the glass. “My granny always said if you don’t let it steep, it’ll be so weak you can read a newspaper through it.”

The advice imparted to him by his late grandmother, Eva Roby, was on the money. There was no reading a newspaper through that glass of tea.

“Anything worth doing takes a little time,” he said assuredly as he poured another glass.

A bit of Roby’s philosophy mixed with his grandmother’s words of wisdom goes well with the refreshing brew.

So do pork rinds.

Roby sells the iced drink with the southern staple at The Buzzard Roost, a small stand he sets up on roadsides or at local farmers markets. The sweet tea compliments the seven varieties of pig skins he cooks up.

An avid conversationalist, patrons definitely get their money’s worth when they stop by his setup.

“Honey,” he said, using his favorite term of endearment for ladies from 9 to 90 years old, “ever since I was a young boy, very young, I always said if I opened a business, I would call it ‘The Buzzard Roost.’” Roby grinned as he looked off in the distance. “So, that’s what I call my little operation.”

“I make all the seasonings myself. It’s all special blends,” he said.

For customers who enjoy a bit of zest, Roby’s chili lime or salt and vinegar rinds will fit the bill. Nacho cheddar, Cajun and taco follow closely behind, but plain and barbecue are his big sellers.

No matter the patron standing in front of him, there’s a story Roby is likely to share:

“In the 80s, I sold enough nachos and popcorn at my Daddy’s place that he bought 15 acres of land outside of Nettleton,” he said with a laugh. “It was fun and I got to meet a lot of folks.”

His father, the late Jimmy Roby, owned a country and western watering hole called Bars Ferry Landing and played in the Bars Ferry Band. Roby worked there in his early years and rubbed elbows with a plethora of musicians – Percy Sledge, George Jones and Tanya Tucker to name a few.

“After the set was over and the bar was closed, he wanted my Dad to take him to the Waffle House. So we all drove to Tupelo,” he said. “We were having waffles and conversation with John about his successful single “Swingin,” and how it earned him his first million.”

Roby said their exchange was soon interrupted by a customer at an adjacent table.

“As we were talking, a lady in the next booth was eavesdropping on our conversation and quickly turned around to us and said ‘I can’t stand that song, ‘Swangin,’” Roby said. He remembered she used a mock Southern slang to add extra derision to her critique. “Well, John slowly turned and look her eye to eye and said, ‘Lady, where’s your million?’ And that was the end of that. She never said another word.”

Although nachos and popcorn profited Bars Ferry in days-gone-by, it’s unlikely they were nearly as popular as the rinds he peddles today. They certainly weren’t created with the same care. Roby’s cooking process begins with a couple of 100-year-old pots, which he claims he bought “at a deal” from an “old timer.”

“I use pure vegetable oil, so folks with peanut allergies have no worries,” he said. “I put the pots on a propane cooker and crank the heat up to 400 degrees.”

The pig skin pellets he uses are special ordered. Each is roughly the size of a quarter. He’ll drop them in the hot grease and let them cook for around 30 seconds.

Once the process is complete, Roby cools and then seasons the pork rinds. Later, he’ll package them in gallon-sized Ziploc bags.

“Honey, I only buy the best,” he said. “Plus I put pride in everything I do, don’t forget that.”

That was yet another bit of advice imparted by his grandmother.

“My granny was one of a kind,” Roby said. He was parked behind his booth at the Fulton Farmers Market and was doing a bit of reminiscing while taking a break from his sales. “She lived in East Tupelo and knew Vernon and Gladys Presley. She had three sisters and as she told it, they all took turns helping out with the birth Elvis Aaron and Jesse Garon Presley.”

He recalled his grandmother talking about that long night and how they whisked away the body of newborn Jesse Presley just minutes after his birth.

In a 1978 interview in Good Housekeeping, Vernon Presley said the night his sons were born, both his parents and two unnamed women were present.

Roby said his grandmother claimed to be one of those two women and spoke of it often in her latter years.

“That’s not my family’s only encounter with the Presleys,” he said. “My dad was the opening act for Elvis, Carl Perkins and Johnny Cash when they performed at the National Guard Armory in Amory in 1955.”

Little Jimmy Roby was only 12 years old when he opened for the trio. He was still 12 when the trio of popular singers sent him to a local bootlegger for whiskey before their stint came to a close.

“Well, as my Dad told it, the bootlegger was not keen on selling the whiskey to a 12-year-old, so he told him he would take it to them himself,” he said.

Roby didn’t follow in his father’s steps in when it came music. His nomadic career path has, however, added to the colorful stories of his family’s prior generations. He delved into reflexology through the years, (he still has a client list for foot massages) and he drove a truck for a period of time.

“I also worked for a cab company in Destin, Florida, for 12 years,” he said. “Two of my favorite clients were Mike and Janet Huckabee. I drove them often. They were the nicest people you’d ever want to meet.”

He even chatted with Jimmy Buffet while the two were pumping gas at a Walmart on a summer day.

“I loved driving a cab, but then came along a company called Uber,” he said. “And that was the end of that. So I came back home to Carolina.”

He began cooking skins part-time while he was working at the Respiratory and Diabetes Center. But then that job played out, and he decided to cook full-time.

“That’s when I started focusing on my little operation,” he said. “Customers text me with orders, and I run a little route. I also set up at Piggly Wiggly in Amory and Evergreen Grocery every other Saturday and at the farmers market in Fulton on Tuesdays.”

Roby’s is still somewhat of a nomadic lifestyle. He wouldn’t have it any other way.

“I really enjoy what I’m doing,” he said confidently. “I’ve added some fruits and vegetables to my stand and it’s going well.”

For Roby there will be no gold watch for sitting behind a desk for four decades. No retirement bonus for years of service. But there is contentment in making an honest dollar and jawing with folks at the The Buzzard Roost.

“As we get older, we look at things different,” he said, channeling the spirit of his granny. “In our younger days, we thought a new car, a big bank account or a fine woman would bring happiness.”

He shook his head.

“Now, I find contentment seeing a smile on peoples faces,” he said. “Even if it’s just with a glass of sweet tea and a few pork rinds.”