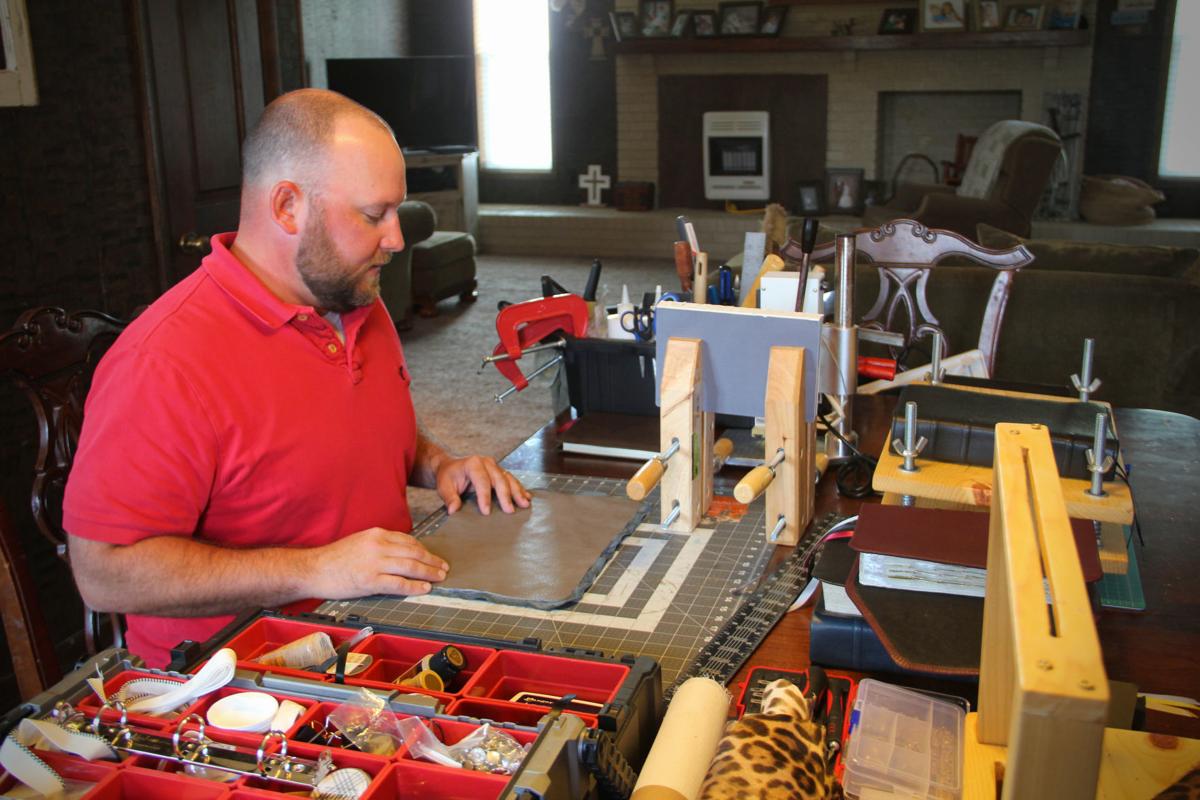 Derek Jones, pastor of Basiliea Baptist Church in Mooreville is a self-taught craftsman in rebinding heirloom Bibles. He began his quest to learn the skill after searching for a bindery to cover his Greek Bible. Jones’ work can be seen on his Facebook page Jones Family Custom Leather Bibles and Books. 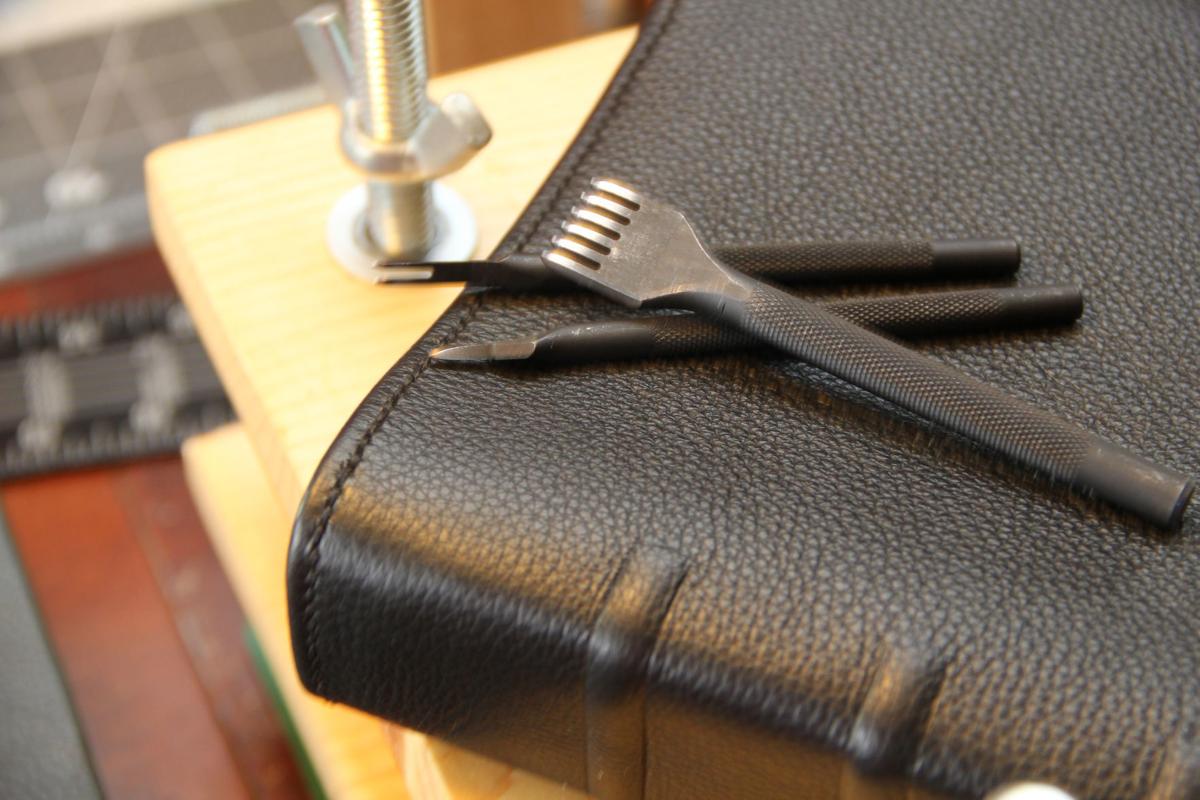 Small tools called an ‘awl’ are used to punch holes around the perimeter of the Bible to allow Jones to hand stitch the cover. 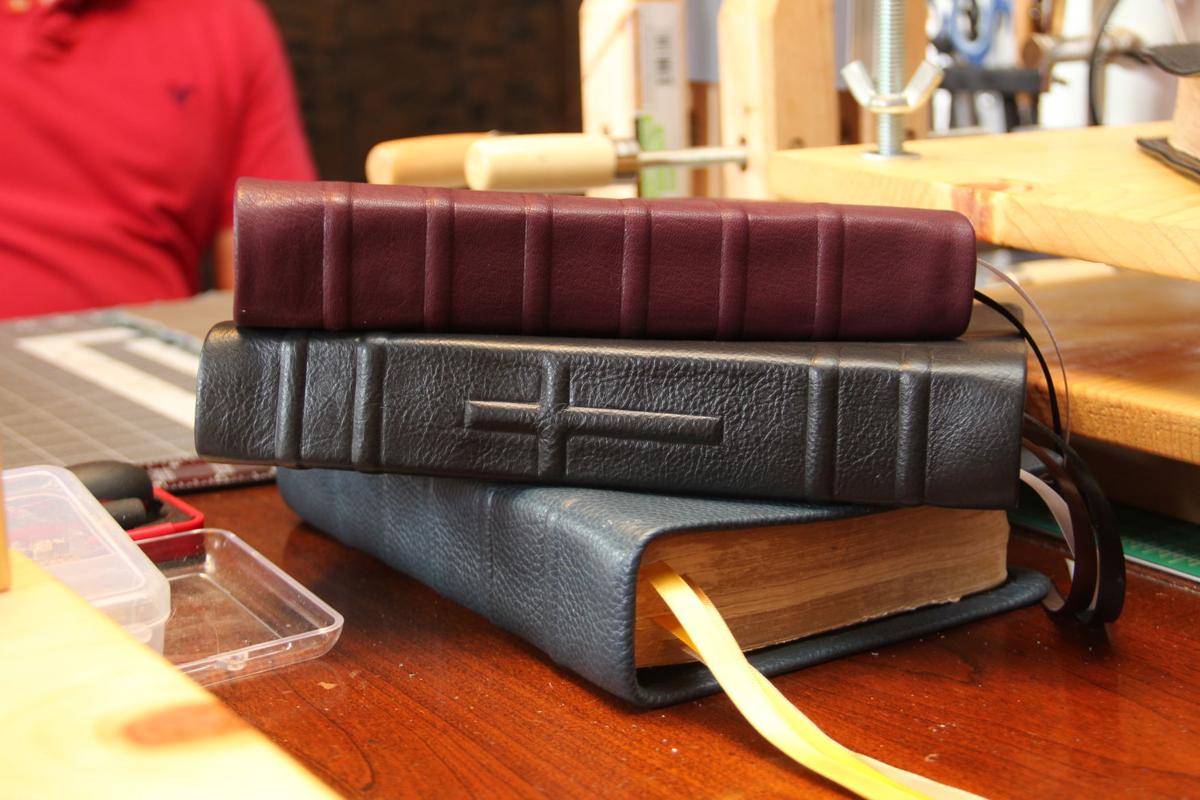 A hand–tooled cross on the spine or cover of a Bible is another customization feature Jones offers in his restoration.

Derek Jones, pastor of Basiliea Baptist Church in Mooreville is a self-taught craftsman in rebinding heirloom Bibles. He began his quest to learn the skill after searching for a bindery to cover his Greek Bible. Jones’ work can be seen on his Facebook page Jones Family Custom Leather Bibles and Books.

Small tools called an ‘awl’ are used to punch holes around the perimeter of the Bible to allow Jones to hand stitch the cover.

A hand–tooled cross on the spine or cover of a Bible is another customization feature Jones offers in his restoration.

“Thy word have I hidden in my heart …”

The opening of this familiar verse found in Psalm 119 touches on the importance of Christians retaining and holding on to scripture. Pastor Derek Jones, owner of Jones Family Custom Leather Bibles and Books, takes that responsibility to heart.

Jones’ entire life has been encompassed with The Word or its Greek equivalent, Logos.

“My whole adult life has revolved around the Bible,” he said. “I don’t remember a time when it wasn’t that way.”

Surrendering to the ministry in 2007, Jones has two degrees from Mid-America Baptist Theological Seminary. He leads Basileia Baptist Church in Mooreville, where he has been pastor for the past nine years.

It was when he wanted to purchase a Greek Bible for his studies that he accidentally – or perhaps divinely – began a hobby that also encompassed The Word: rebinding worn Bibles.

“I was looking for a Greek Bible in soft leather, and the only one available was hardback,” Jones said. “So, I purchased one and sent it to be recovered.”

The closest bindery he could find was in Indiana. Once the lengthy and pricey process was done, he received his Bible.

“It looked great and felt great, but the $250 price got me to thinking, maybe I can do this,” Jones said.

He began to study the binding process by watching tutorials and researched websites until he became innately familiar with the tedious step-by-step skill of rebinding. Much of what he learned came through trial and error.

“I did a few and gave them away,” Jones said of his attempts at the process.

Now the pastor who spreads The Word also salvages The Word by restoring precious heirloom Bibles.

“I love old things,” Jones said. “I especially love doing the old heirloom Bibles. I’ve done numerous for preachers that had a lot of their old sermon notes in them. Those are special.”

For individuals looking to restore a Bible, choosing its new look is the first step. Jones uses a variety of leather. Goatskin is one of the most popular for the exterior, with calfskin, sheep and cowhide also favored options. Jones orders much of the leather he uses from Italy.

The interior is often bound in lambskin, a thinner more suitable choice that’s soft and more flexible. End sheets inside the Bible are silk moire or Arrestox, a brand of rich vellum or natural linen. Sometimes he uses pages from discarded hymnals if the individual prefers opening their copy of The Word to a favorite song.

Berisford satin ribbons are used for bookmarks. A host of colors, from deep purple to royal blue or bright red are used to compliment the leather exterior or boldly contrast it.

Jones then begins his process with stripping down the book. Once it’s taken apart, he can determine if the spine of the book needs repair. Glue is used on many Bibles, but if the spine is sewn, he must stitch the pages back together.

The Bible is precisely measured for its new cover. Once the leather is cut, the exterior leather must be “stripped” along the edges. The technique is done with a special tool and thins the edges, allowing it to fold easily to the inside typically leaving a 3/4-inch hangover.

Jones builds the spine using mesh and glue. He then adds an “Oxford hollow” spine for reinforcing. The paper, flattened tube-like reinforcement allows it to be easily opened flat.

“If you purchase a bonded Bible, and you really use it, it will only last you a couple of years,” Jones said. “If it’s put together well, it will last a lot longer.”

Jones noted that although Bible covers are used to protect them, they often cause damage by putting to much pressure on the cover when they are opened.

Measuring, gluing and stitching requires skilled workmanship, but the actual design requires a great deal of craftsmanship. Jones uses tooling techniques to add features like a hand-tooled crosses to the spine or cover and hand stitches the outer edges using an “awl” if the individual prefers stitching.

“I use the awl to put the holes in and then hand-stitch around the perimeter,” he said.

Adding to the aesthetics, the edges of the pages can be gilded with the common gold paint or “blacked out” using a black paint. The finish serves to protect the pages from wear and tear.

The last step is customizing the name.

Jones performs every step of his craft from the dining room table of his modest Kirkville home. A spot, he admits, his wife, Jessica is not always happy about.

“I have to move all my stuff sometimes,” Jones said of the presses, tools and gadgets it takes to get the job done.

But it’s necessary for the couple have a meal with their four children, daughter, Madison, and three sons – Caleb, Canon and Cohen.

Jones has been so taken with the binding process, he’s even expanded his business. He’s added custom leather three-ring notebooks for sermon notes in addition to his rebinding business. He keeps his rebinding cost at less than half of that which the Greek Bible he first sought cost him.

“It takes roughly eight hours to take one all the way through the process,” he said. “For me, it’s not about the money. Every one of them has sentimental value to the person it belongs to.”

When handling the frail, brittle pages of a Bible that may go back three generations or more, Jones says he takes pride in putting a strong binding around them. There’s a lot of history in those books; it’s important to him they receive love and care.

“Each one of these Bible’s has a story,” Jones said. “It’s really neat to have a little part of passing something so precious down through the generations.”