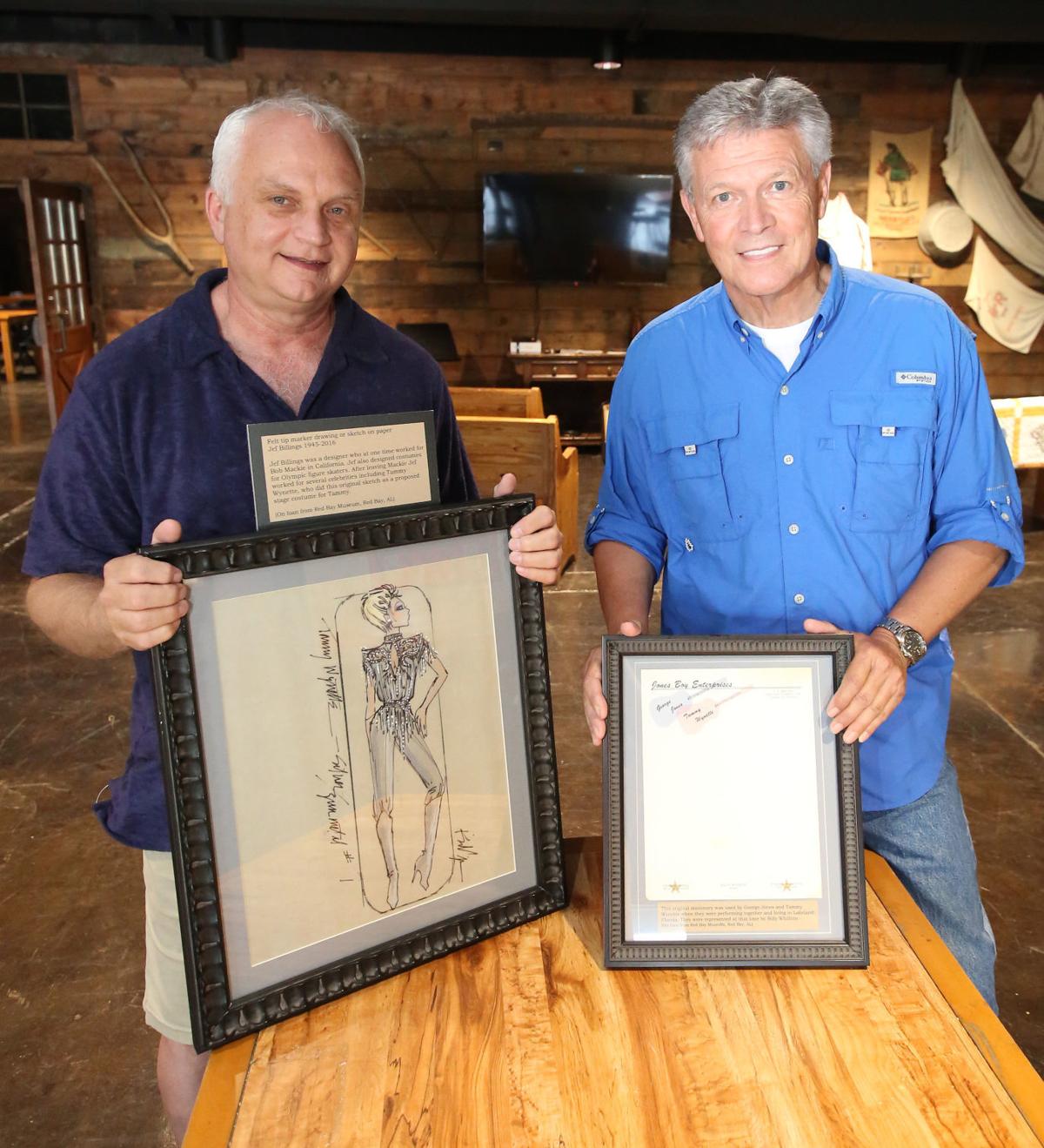 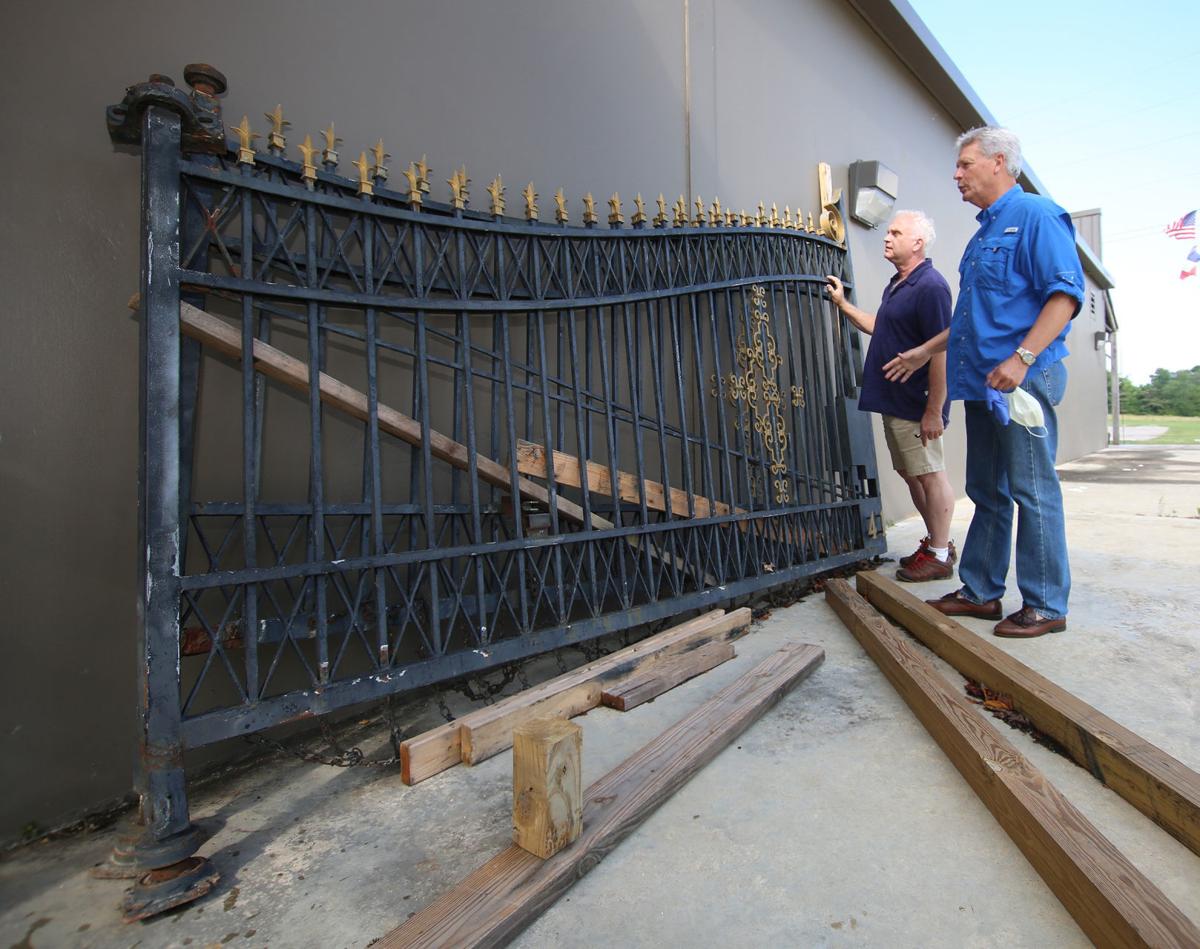 Scotty Kennedy, curator of the Red Bay Museum, left, and Larry Cantrell, president of the Tammy Wynette Legacy Park Board of Directors, examine and discuss the gates that once adorned the driveway to Wynette’s home in Nashville and now, thanks to Kennedy, will soon be on display at the Legacy Park in Tremont. 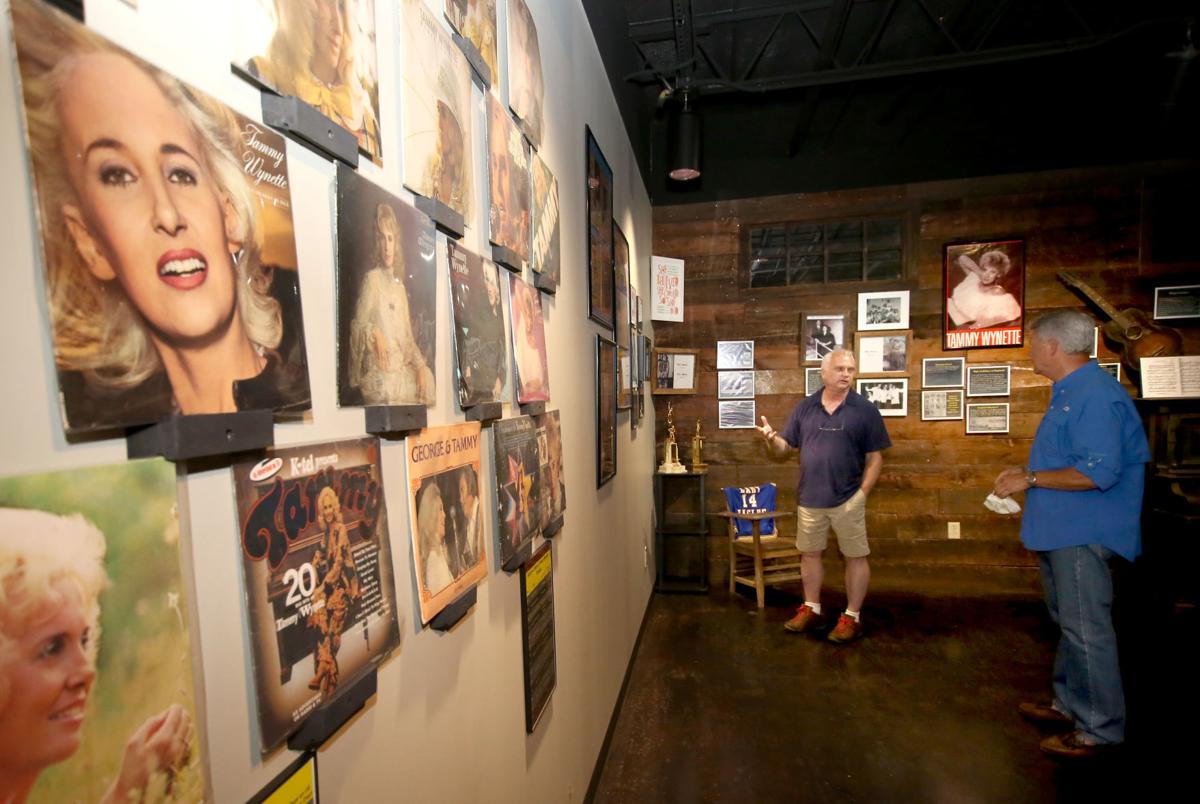 Scotty Kennedy, curator of the Red Bay Museum, left, and Larry Cantrell, president of the Tammy Wynette Legacy Park Board of Directors, examine and discuss the gates that once adorned the driveway to Wynette’s home in Nashville and now, thanks to Kennedy, will soon be on display at the Legacy Park in Tremont.

After years of what can best be described as a tense coexistence, the gates seem to have finally opened on a new symbiotic relationship between the Red Bay Museum and the Tammy Wynette Legacy Park in Tremont.

For new Park Board President Larry Cantrell, it’s about time, and he doesn’t want to waste another minute, even though the COVID-19 pandemic and shutdown of the country have delayed his plans. For Red Bay Museum’s Scotty Kennedy, the new direction means a greater opportunity to tell the story of the First Lady of Country Music, with whom he was friends.

These gates aren’t just figurative though. They’re a real, tangible example of what the future may hold. The Park (TWLP) recently took delivery of the massive iron gates that once adorned the front of the driveway to Wynette’s home in Nashville. It was Kennedy who helped steer the gates toward their new home at Tremont. The museum curator knew the gates existed, but at 11-feet wide each, there was no way and nowhere to display them at the current Wynette exhibit at the Red Bay Museum. Then he had an idea: Red Bay didn’t have the space, but Tremont did.

“Laura Peters is a wonderful, sweet person from Georgia who has benefited the Red Bay Museum with several items that she’s purchased,” Kennedy said. “She was able to purchase the gates from 4121 (the affectionate name for the home where Tammy lived in Nashville).”

Kennedy asked Peters if she would loan the gates to TWLP since they had the space to properly display them. She was thrilled they could be displayed and quickly agreed. The gates were delivered this month to the facility on Hwy. 178 in Tremont, where they will again be able to be seen by visitors from around the world.

Kennedy and Cantrell are working with Peters to discuss the extent to which the gates will be restored. Already, Cantrell has received a donation offer from a Mantachie business to cut and paint new metal lettering for the gates to recreate the numbers 4121 and the large “T” and “W” that once adorned the railings.

In addition to the gates, Kennedy last week presented Cantrell and TWLP with a framed piece of letterhead from the time when Wynette and then-husband George Jones were singing together in Lakeland, Florida. The Red Bay Museum also loaned TWLP a framed sketch of a dress designed for Tammy by Jef Billings, who was one of the major dress designers for Wynette.

“I don’t think this dress was ever made,” Kennedy said. “We were able to acquire a lot of these from the estate and we have them in storage, so we thought what better way than to share them than with the Park down here?”

‘Let’s Build a World Together’

It is no secret that TWLP has struggled since it was first opened in 2017. The center has opened and closed a couple of times due to lack of funding. Originally, a restaurant inside the park center was used to generate revenue, but struggles to keep costs under control made the restaurant unfeasible and forced TWLP leaders to reevaluate fundraising.

There has also been some tension between Tremont and Red Bay, with previous TWLP board members and some in the community holding concerns that Red Bay Museum might attempt to compete with TWLP in an effort to draw traffic away to see the Wynette exhibit across the state line. Kennedy said that has never been the intent of the Red Bay Museum, and he hopes these latest efforts prove that position is genuine.

Several things have happened in the past few months that could turn around the fortunes of TWLP and grow the relationship between the town where Wynette attended school as Virginia Wynette Pugh and the city she called her hometown, Red Bay.

A new TWLP board of directors was elected in February, with Cantrell being named president. A non-voting advisory board is also in place and has drawn the support of some original backers of TWLP.

Cantrell, whose family left Tremont when he was 8 years old, enjoyed a lengthy career in investment banking before coming back home. With a love of music and a background playing – he and his group, Larry Cantrell and the Blue Mountain Band, played some opening songs for George Jones’ final appearance at the Davis Event Center at Itawamba Community College in Fulton – Cantrell’s desire and vision to see TWLP flourish has already seen positive results despite the interruptions to everyday life brought on by the COVID-19 pandemic.

Tremont’s Town Hall operations have moved into the building, allowing the facility to be open normal hours for visitors during the week. Prior to this, the facility was only open during special events or by appointment. Cantrell, who has been working on new displays and organizing the inside of the facility, recently completed a place for visitors to stop in and watch videos of Wynette performing on stage.

Cantrell’s vision is to create a facility that can draw visitors to the region as part of a music trail. He said TWLP is perfectly situated near Tupelo and the Elvis Presley Birthplace, and is close enough to the Mississippi Blues Trail and Nashville and New Orleans that it would be easy to tie in visits to Tremont and Red Bay as part of an exploration of the roots of the nation’s music. Add to that the amount of traffic on nearby Interstate 22, and Cantrell can’t help but be excited. The facility’s guest book shows visitors already from New York, Toronto, England and even Hong Kong.

“This has just got so much potential,” Cantrell said. “Look how close we are to the interstate. Three-hundred thousand people signed the registry there last year, and that’s just the ones who registered. We need to figure out a way to get some of those folks stopping here but we’ve got to have something for them to do.”

To that end Cantrell is envisioning singing and musical events at TWLP, as well as a small recording studio where those who stop by can sing and record their own CDs.

Both Red Bay Museum and TWLP are actively seeking items and memorabilia from Tammy’s upbringing and life. Both museums also welcome donations of items that depict life in the era in which Wynette grew up as well as things related to businesses, churches and schools from both towns to add to their displays. As an example, TWLP recently received and placed on display a dining room table and chairs Wynette used in her home. Anyone looking to loan items to Red Bay Museum can contact Kennedy at 256-412-1983. For TWLP, contact Cantrell at 601-946-6215.

Cantrell said TWLP has embarked on a scholarship program that will help anyone wanting to learn to play music. Cantrell recently visited the Red Bay Civitan Club to discuss the plans, and the club has made a donation toward the scholarship fund.

On a recent afternoon when Kennedy stopped in to lend the letterhead and dress sketch and see the gates, he and Cantrell spent a long time touring the facility and discussing ways to maximize the space and sharing thoughts on displays and plans for the facility. Kennedy, who has curated the Red Bay Museum and created what has been widely touted as one of the region’s best small-town museums, said he would like nothing more than to see TWLP succeed, as it will give more people an appreciation for what Tammy accomplished in life. Cantrell agrees.

“Her Legacy is not her personal life,” Cantrell said. “Her Legacy is the fact that she never gave up on a dream. That’s the legacy and that’s the thing we need to be teaching people. Not that she got married four or five times and not that she lost her health. The legacy is this girl had a dream in little bitty Tremont, Mississippi and Red Bay, Alabama. She believed she could, so she did.”

Jason Collum is the owner and publisher of the Red Bay News and Baldwyn News. He can be reached at rbaynews@gmail.com