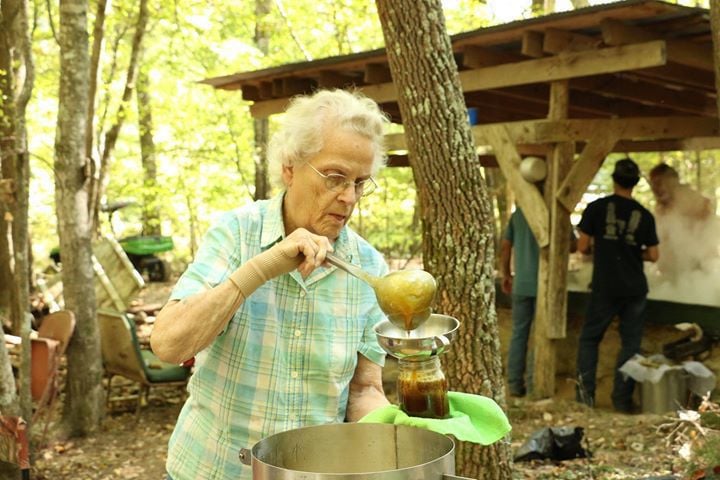 Tremont’s Virble Booth pours the freshly made molasses into fruit jars. This years crop yielded the family about 11 gallons of molasses. 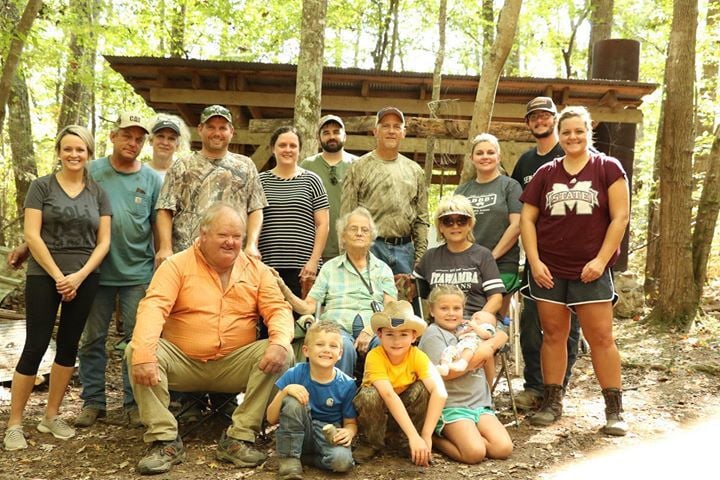 Booth is surrounded by family and friends at the families sorghum mill on the banks of Gum Creek. Processing molasses goes back generations in the Booth family. They start the day long process at sunrise and complete the task by sunset. Booth says, “it’s a family affair.” 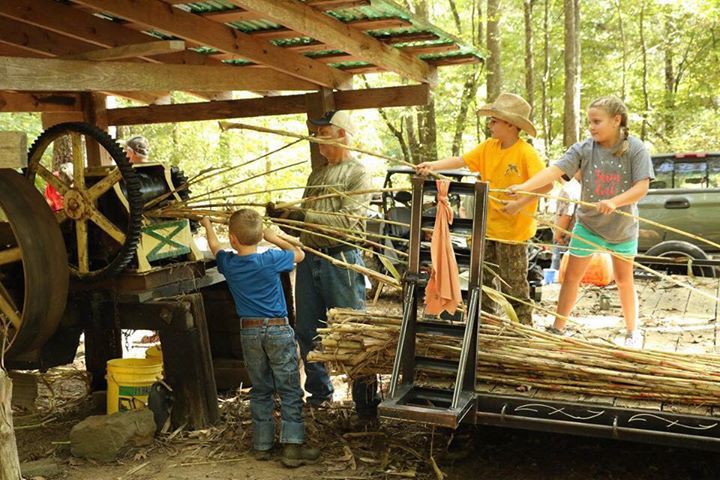 Feeding the “stripped” sorghum stalks into the wheel is a favorite job of the Booth children. 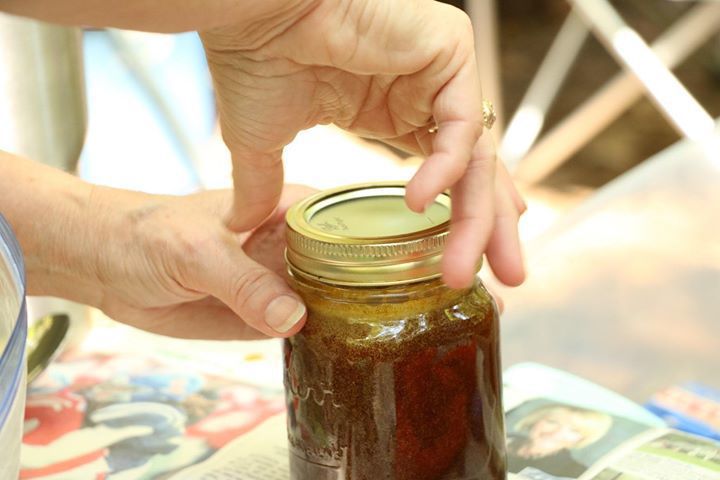 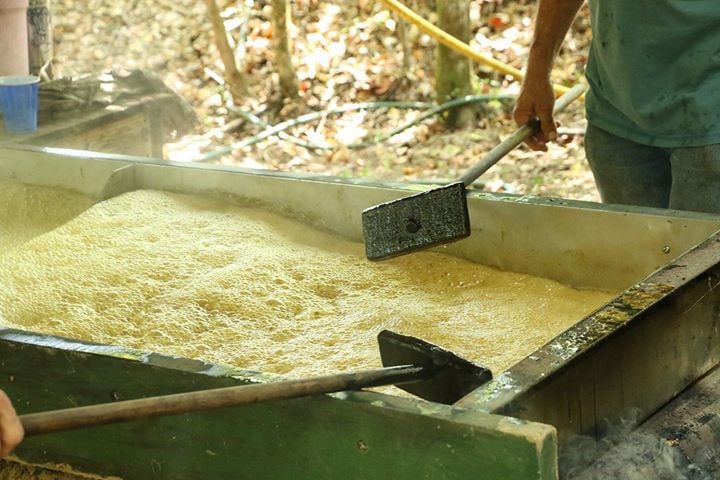 Tremont’s Virble Booth pours the freshly made molasses into fruit jars. This years crop yielded the family about 11 gallons of molasses.

Booth is surrounded by family and friends at the families sorghum mill on the banks of Gum Creek. Processing molasses goes back generations in the Booth family. They start the day long process at sunrise and complete the task by sunset. Booth says, “it’s a family affair.”

Feeding the “stripped” sorghum stalks into the wheel is a favorite job of the Booth children.

Virble Booth’s life is simple. Her quaint country home is nestled on a wooded hillside just west of Tremont. Her rocking chair sits in front of a glass door that looks out onto her porch. The silver-haired 87-year-old sits there and relaxes. She crochets on occasion, a hobby she says her aging hands won’t allow her to do for very long.

She talks with great pride about her days growing up in Itawamba County, about her family and their love of molasses. Atop her kitchen table sits a pint jar filled with the deep golden-brown syrup. It’s almost the same rich color as the soil she and her late husband, Charles, raised their five children on.

For decades, the family has gathered on the banks of Gum Creek and taught generation after generation how to make the distinctive sweet, but slightly bitter, delight.

She talks about the process, or more appropriately, the art of making molasses. Her late husband likened it to a family reunion in a 1991 article published in the pages of “The Itawamba County Times.”

“Molasses making has been passed down for generations from father to son in my husband’s family,” Booth said of the tradition. “I don’t know how far back it goes, but Charles’ granddad did it, then his dad did it.”

Booth said the family’s sorghum began as a cash crop. It’s long since lost its profitability. These days, the family grows it for the pure pleasure of it.

Booth’s son Jerry learned the process of making molasses years ago and is now teaching her grandson Ben the finer points. Jim Cody and Mike Bennett like to lend a hand when the mill is fired up.

This year’s crop yielded 11 gallons of molasses. In years past, the amounts have varied. In good years, she said they could get upwards of 35 gallons worth.

The 1991 crop yielded 89 gallons according to The Times article, from about three-fourths an acre of ground.

Booth said there has only been a few times when their plans were thwarted.

“Once we had a storm that blew the shed down. One year there was too much rain and one year, a drought,” she said. “Other than that, we get it done. We’re proud but tired.”

The process of making molasses begins with planting sorghum, typically in late May or early June. Sorghum cane grows in stalks that look like field corn in appearance. Once the stalks are ready to harvest, around October, they are cut down with a kaiser blade, machete or whatever the harvester prefers. The leaves are stripped from the stalk and the seed head cut off. The stalks are then loaded onto a trailer and hauled to the family’s boiling site.

“We start around daylight,” Booth said. “We try to get it all done by dark so we don’t have to fire up for a second day.”

The trailer loaded with stalks is backed closely to the small tin-top sorghum shed. Blocks are placed behind the wheels of a tractor (“scotching” as it’s called) to prevent it from rolling while the engine serves as a power source to run the wheel or press. Before tractors were used, mules served as the power source for the sorghum mill, turning the press while walking in circles.

The stalks are fed into the press by handfuls, squeezing the juice from the plant, which then runs into a barrel. The juice must then be strained through a white cloth to rid it of any grit or grime. Straining is typically done two or three times to be certain the liquid is clear of anything that might taint the syrup.

Once strained, the juice is placed in a large rectangular pan and set atop a fire. Once the juice has been brought to a boil, the fire must burn at a fairly consistent temperature to prevent burning the syrup. Constant stirring is also a requirement for a good batch.

As the syrup continues to boil, a bubbly foam will rise to the top. This must be skimmed throughout the day.

“They stir the molasses with a wooden paddle and use a skimmer with holes to remove the foam,” Booth said. “That goes on all day until they are done.”

If the humidity is high, Booth says it takes the molasses longer to cook. After the six- to seven-hour cooking process, it’s is poured into jars, ready to be taken home.

The long day requires the family to pack a lunch. Booth says this meal has long been a family tradition.

“We take plenty of food when we head down to the creek,” Booth said. “Sometimes visitors stop by while we’re there, and we invite them to eat.”

The meal not only feeds the hard workers, but serves as a time of fellowship with sons and daughters, in-laws and cousins, grands and great-grands, and friends. In that way, the day yields something much sweeter than the jars of molasses they take home.