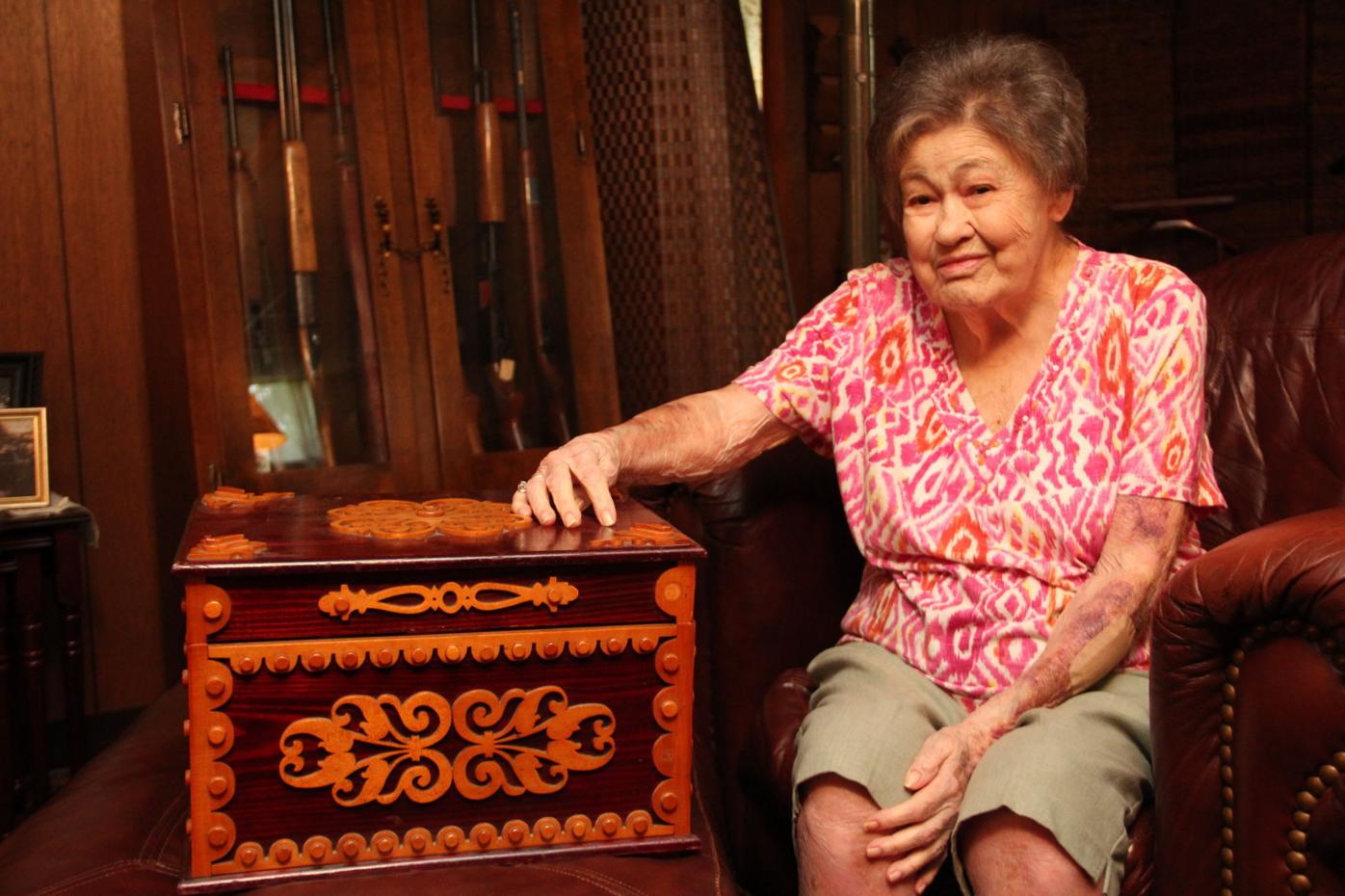 Elfrieda Martin sits next one of her most cherished possessions, her sister’s sewing box carved by her uncle for graduation. Martin sold her box to purchase a can of Crisco for her family. Her sister, Gertrude, gifted Martin her sewing box before her death. 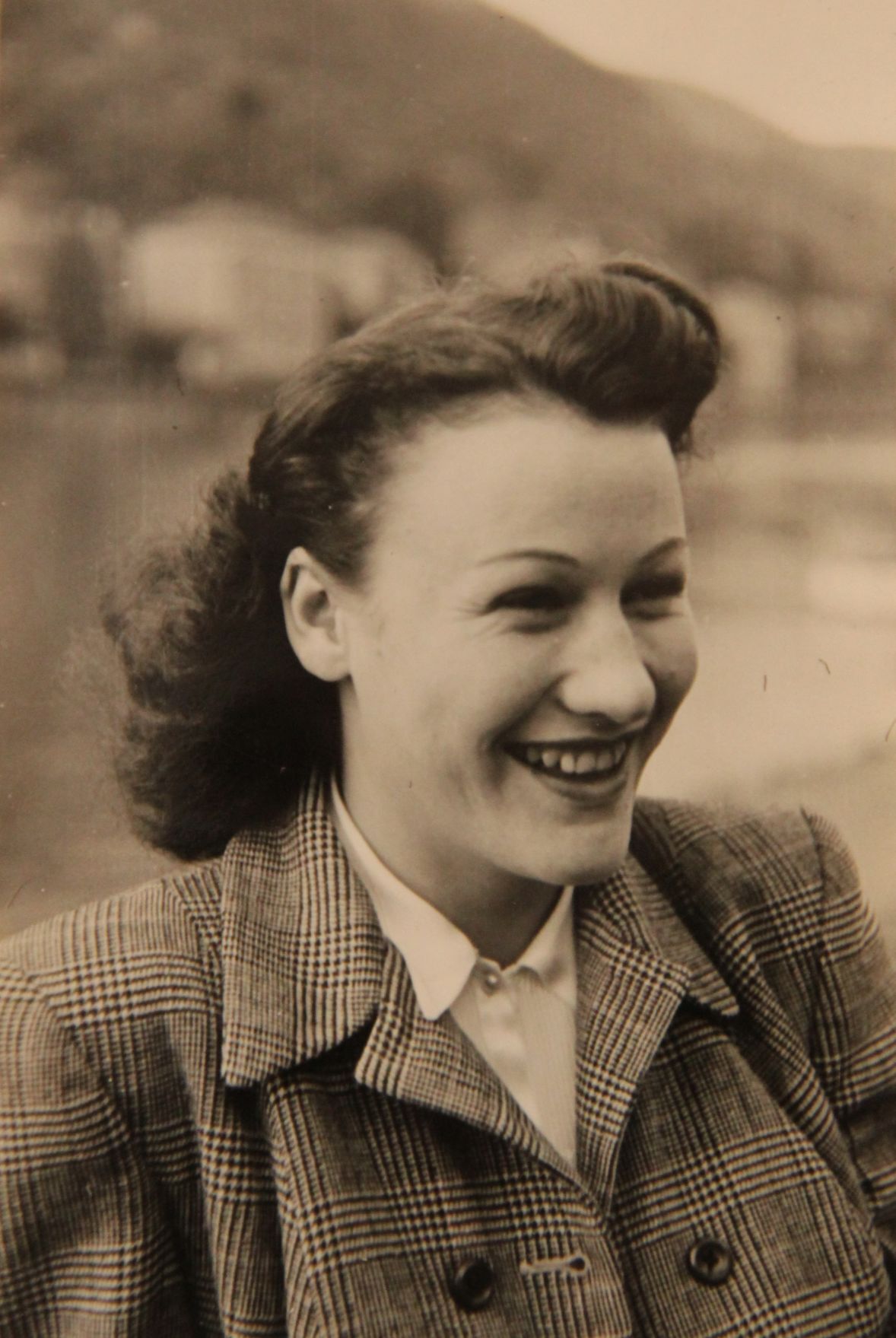 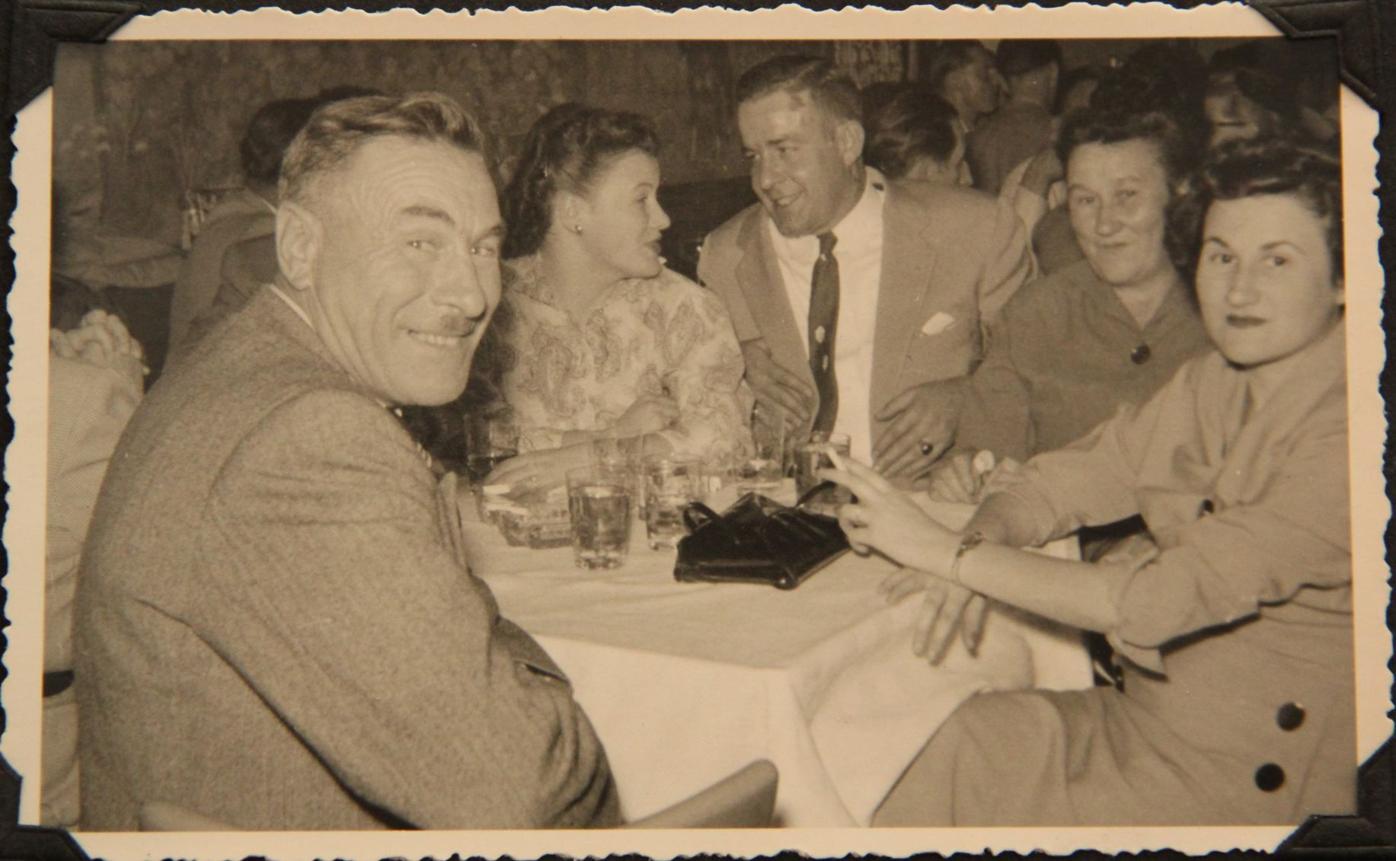 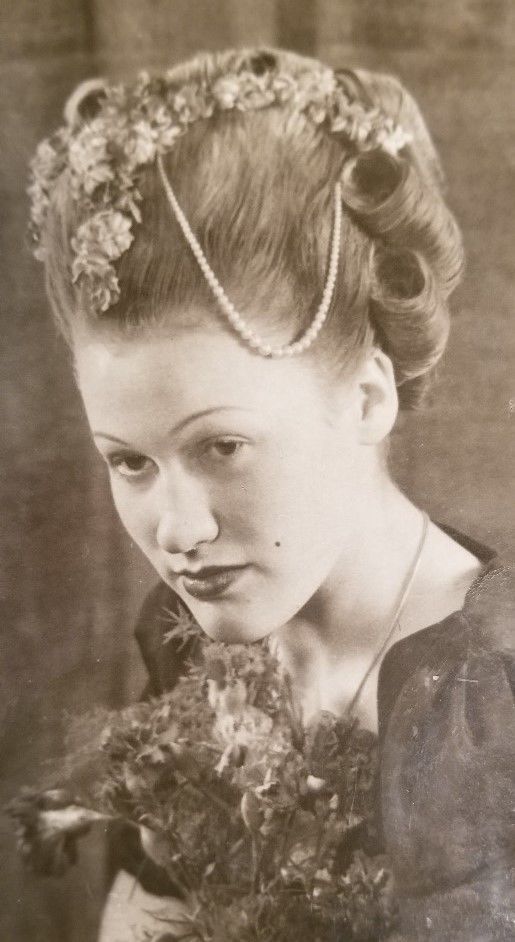 Elfrieda Martin sits next one of her most cherished possessions, her sister’s sewing box carved by her uncle for graduation. Martin sold her box to purchase a can of Crisco for her family. Her sister, Gertrude, gifted Martin her sewing box before her death.

Editor's note: The Itawamba County Times staff would like to once again share Elfrieda Martin's story. Last September, she gave our readers compelling insight to what it was like growing up in Germany during WWII. Mrs. Martin died Sunday, March 28. We offer our sincerest condolences to her family.

When storm warnings come, 92-year-old Itawamba County resident Elfrieda Martin carries a duffle bag filled with personal items to her basement. She takes refuge there until the threat passes. The bag is her reassurance that she has what she needs should everything else be destroyed.

She’s been in the habit of packing a duffle bag since she was a young child.

Martin was the tender age of eight when Hilter invaded Poland in 1936. As the war progressed, her father instructed her to choose her most cherished items along with some clothing, put them in a bag, and set it beside her bed. When the airstrike sirens of WWII sounded, she was to grab the bag and keep it with her until the threat had passed.

It was her father’s reassurance that his daughter would have what she needed, should everything else be destroyed.

Old habits are hard to break.

Born to Adam and Phillipine Jungmann (pronounced ‘u-maan’) on August 28, 1928, Elfrieda and her sister Gertrude lived a comfortable middle-class lifestyle in the town of Feudenheim, Germany about 3 kilometers west of Mannheim with their parents.

Her fluent English still carries a noticeable German accent. The long a’s and the distinct v’s in place of her w’s are telling of the longtime American citizens’ heritage. Her pronunciation seems fitting as she tells story after story of the war-torn suffering her family endured under Hitler’s fascist leadership.

“Before the war, we were just enjoying life and living like everyone else,” she said. “We went to school, we had both German and Jewish friends, everything was good.”

Early on there were no warnings or sirens, so when leaflets began to drop from American planes warning the residents of impending airstrikes, her parents did not take it seriously.

“My parents didn’t know what to think, then things worsened,” she said. “We did not understand how this evil person, Hitler, had gained so much power and as the war progressed, we became more and more fearful.”

The Jungmann’s continued their daily routines amid the growing intensity of war. Martin’s father kept working for the city street department and her mother carried on her household chores. Elfrieda and Gertrude attended school daily. Leaflets continued to fall from the sky, followed by airstrike warnings. Each blare carrying a distinctive tone.

“Each sound was different,” Martin said. “The first was to alert the people the planes were coming, the second meant to get to the bunker, and the third meant we were clear to come out of the bunker.”

Each time the piercing toll sounded, the young Martin would grab her duffle bag and make her way to the bunkers.

“When the strike was over, we could see how much damage was done,” Martin said. “You never knew what to expect when you came out.”

Martin recalled one night when there was no alert siren to warn the residents of the impending strike, only the blare to “get to the bunkers” rang out across Feudenheim.

“We had three bunkers in town, but it was too late,” she said. “Everyone panicked and began running and jumping into the bunkers on top of one another. Someone landed on a baby carriage and killed the baby. There were many people killed that night. I lost many classmates and friends during the war.”

The family witnessed both death and destruction all around them, but somehow through it all their lives and their home was spared. The most damage the Jungmann’s incurred was the windows of their home being blown out, leaving her father to put cardboard and wood shutters in the open frames. Martin’s aunt was not as fortunate.

“I will never forget September 5th and 6th, that date forever in my mind,” she said. “My aunt’s home was completely destroyed. As a young child, that’s when the war became real to me.”

The harsh realities touched every aspect of the Jungmann family’s life. Even down to their food and water supply.

“My father built a container to hold some water, but we also kept buckets of sand outside the house in case it caught fire, and we didn’t have enough water,” she said. “For food, we were given ration cards, but by the time we got to the store, the items were all gone.”

Martin’s mother would walk up into the nearby mountains and barter with the farmers that lived there to get the family food.

“My grandfather made shoes at a shoe factory and my mother would take some of those shoes and trade for food with the farmers there,” she said. “The farmers needed shoes and we needed food.”

Martin herself sacrificed one of her prized possessions to help feed the family. Her uncle had intricately carved wooden sewing boxes for both his nieces and when the family ran low of supplies, Martin sold hers to an American for a can of Crisco.

“My sister would not sell hers, so I sold mine,” she said. “It wasn’t something I wanted to do, but I felt like I had to do it.”

As the war dragged on, Martin became a teenager.

She was forced to attend Hitler’s youth meetings each week for the indoctrination of the Nazi philosophy. While her family did not believe in his ideology, the consequences of not doing as his leadership required left the family living in fear.

She graduated from high school at 14 years old, the average age for German graduates, and began her apprenticeship (pflichtjahr) required by the German government after high school is complete. Gertrude worked for a farmer and Freida worked for a dentist and for a nursery that grew vegetables for soldiers.

It was there that she met a young Ukrainian named Herman.

“I worked in the garden, washed, ironed, and made the beds for the young men who lived and worked there. I excelled in ironing,” she laughed.

Concerned for Martin’s safety, every night Herman would walk alongside her as she rode her bike home. It was a gesture that she has never forgotten.

“We were working outside one day and a plane was shot down,” Martin said. “Herman wanted to go see it and suddenly a piece of shrapnel fell from the sky and hit him in the back of the head and he fell backward.”

Realizing the young man was gravely injured, the nursery owners and Martin placed him on a makeshift bed for comfort. He didn’t want Martin to leave him.

“I sat there and held his hand until he died. He was the nicest young man I ever knew,” she said tearfully.

After her apprenticeship ended, Martin took night classes to learn English. She worked at a GI club as a translator for soldiers where two American soldiers approached her about making some money.

“I started selling the surplus goods the soldiers had. Maxwell House coffee, Lux soap, nylon stockings sent from the states,” Martin said as she was shaking her head at what she had done.

The black market operation made the young woman nervous. Her leather satchel broke one night as she walked across the train tracks to meet her Polish dealer.

“Lux soap went everywhere. I was so nervous and hurriedly tried to pick it up,” she said. “It took me so long. When I got home my mother was upset and she never wanted me to do that again. I just said you don’t have to worry.”

Learning English proved to be beneficial to Martin in more than a black market soap and coffee operation. As the war came to an end and the rebuilding of Germany had begun, Elfrieda was working in Mannheim in 1954 when a young American soldier named Rex Martin came in her office to get supplies. The two later married and enjoyed living in many states as Rex continued his military career taking his wife to Japan, Korea, and throughout the states.

The couple spent five of those years stationed in Germany. Rex Martin died in 2014.

When Elfrieda Martin talks about the war, she is no longer a 92-year-old woman carrying a bag to her basement, she’s a 10 year-old clutching it in her hand just like her father said. She’s a 14-year-old holding the hand of a dying friend.

A duffle bag, a satchel, and a sewing box may be common everyday items in many American homes, but to Elfrieda Martin they are not common at all.

Prior to Gertrude’s death, she gifted her sewing box to Elfrieda.

She cherishes it to this day.

ICDC BEAT: Give of yourself to others