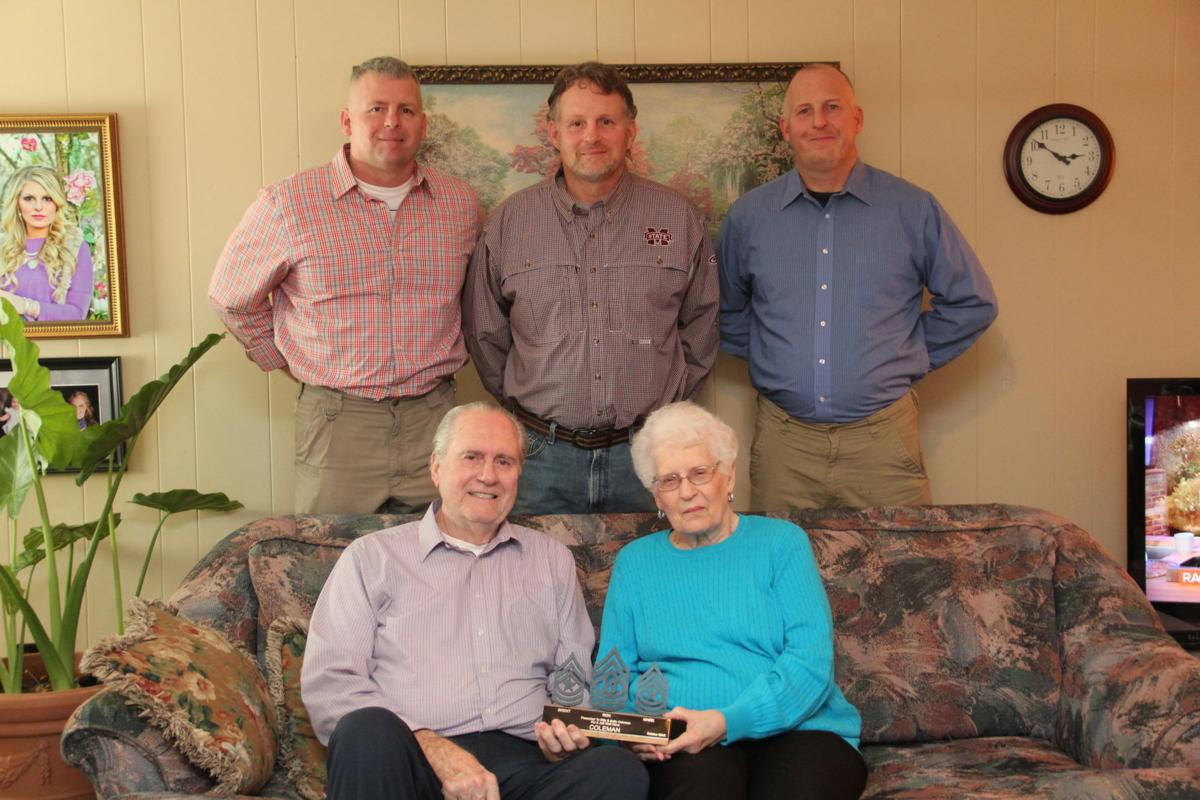 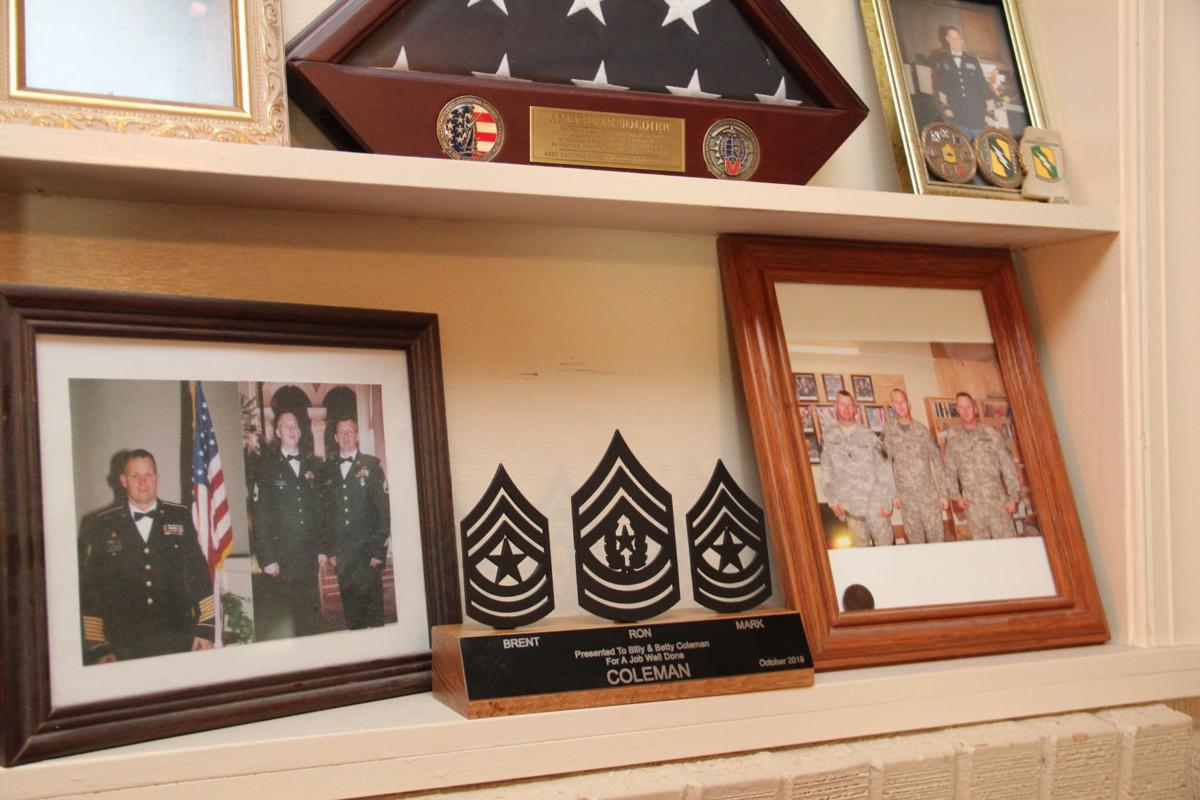 The plaque sits between photos of the Colemans’ three sons in uniform.

The plaque sits between photos of the Colemans’ three sons in uniform.

Holidays in the home of Fulton’s Billy and Betty Coleman are the classic depiction of a small town family gathering.

Take Thanksgiving, for instance, which yielded an extensive feast with all the fixings. Christmas will be the same when their four children converge upon the homestead, their extended families in tow.

According to Billy Coleman, even a stranger could stroll through the house and join the festivities.

“Sometimes we just look up and say, ‘Now who are you?’” he said with a laugh, speaking about their growing family.

He’s convinced, much to his family’s chagrin, the family den will sleep 11. Should one inquire, he’ll gladly lay out his plan for fitting this many people in the space.

Whether serving as sleeping quarters or being engulfed by mounds of wrapping paper on Christmas Day, the family’s den serves no greater purpose than to display photographs and successes of their children and grandchildren, especially the military achievements of the Colemans’ three sons, Ron, Mark and Brent.

Both Mark Coleman and Brent Coleman, who currently serve full time with National Guard, have reached the rank of sergeant major while their older brother, Ron Coleman, served as command sergeant major before retiring.

Their proud parents, now in their 80s, were recently presented a plaque by the Mississippi Army National Guard on behalf of their sons’ high honor. Sitting atop a wooden base are three metal rank insignia, representing their high ranking status. The center insignia bears a wreath around its star, signifying Ron Coleman’s rank as command sergeant major.

The accomplishment is rare. Extremely rare.

According to www.army.mil only 1% of reserve soldiers and 0.8% of active-duty soldiers will ever reach the rank of sergeant major or command sergeant major. The odds of three brothers reaching the prestigious status would give any theoretical statistician a run for his money.

“If our sister, Donna, had joined the military, she’d probably be a sergeant major, too,” Ron Coleman joked.

Ron Coleman was the first of the brothers to join the National Guard. That was in January 1983. He was 20 years old.

Stationed with the 155th Armor Brigade Combat Team (ABCT), Coleman served two deployments in Iraq from 2004 to 2006 and 2009-2010. He was mobilized during Desert Storm with the same platoon.

For his service, Ron Coleman received the prestigious Legion of Merit military award given for exceptionally meritorious conduct in the performance of outstanding services and achievements. At one point in his career, he served as a commanding officer over his brothers, a position that made life exponentially tougher on his younger siblings.

“I made it harder on them,” Ron Coleman said. “They got what they got because they did it on their own, not because their brother made it easy on them.”

The command sergeant major spent 32 years in service before he retired in 2015.

In 2002, he made the National Guard his full-time career. He serves as operations sergeant major for the 1-98th Cavalry in Amory.

He will be the first to agree that his brother didn’t make military life easy for his younger brothers.

The most reserved of the three, Mark Coleman is touted by his brothers as the thinker in the bunch.

“He used to trade me nickels for dimes when we were kids,” Brent Coleman recalled. “He told me the nickels were worth more because they were bigger.”

He currently serves as G-4 Sergeant Major of Logistics in Flowood, Mississippi.

Brent agrees that the brothers have made tremendous sacrifices while serving, but he doesn’t want the sacrifices of their families to be shortchanged.

“While we were away, everything still had to be done at home,” he said. “Mowing the grass, taking care of the home and children, it all falls on our wives’ shoulders. You have to be resilient to be a military spouse. We are not the only ones who sacrifice.”

Their parents’ sacrifice also can’t be discounted. The Colemans struggled with having three sons in battle at the same time.

High above Billy Coleman’s easy chair hangs a service flag, also known as the Blue Star Flag. During WWI, it became an unofficial symbol of having a child in service during a period of war. Outlined in red, the hand-stitched gift from family friends Karen Wood and Mitzi Moore bears three blue stars. It’s representative of the Colemans’ sons serving concurrent tours of duty in Iraq.

“When they all left for Iraq, it was very nerve-wracking,” Betty Coleman said. “You have to depend on the Lord, that’s all you can do.”

She still speaks of it with a hint of despair in her voice.

The brothers did not serve in the same unit but could see each other from time to time while deployed.

Ron Coleman recalled when his grandmother, Pearl, died. He remained in Iraq with his men, foregoing the decision to return home for her funeral.

“I just couldn’t come home,” he said. “I hadn’t lost any men, and I was afraid if I left someone might be killed.”

He compared the job of being a commanding officer to that of being a father, a protector of the men in his unit.

Five days after the transfer of authority from Ron Coleman’s unit to another in Iraq, five men were killed in an IED attack.

“That’s what keeps you awake at night, keeping everyone else alive,” he said with obvious anguish.

Serving in the highest enlisted rank has given the brothers a unique bond.

“We’ve researched as best we could and can’t find any records of three brothers who have all reached the rank of sergeant major in the state,” Mark Coleman said.

Such statistics aren’t exactly easy to come by. The number has to be small. But on Christmas day, amid the mounds of wrapping paper in Billy and Betty Coleman’s cramped den, there will sit three sergeant majors, their service and sacrifice gifts to their country, their parents, and each other.