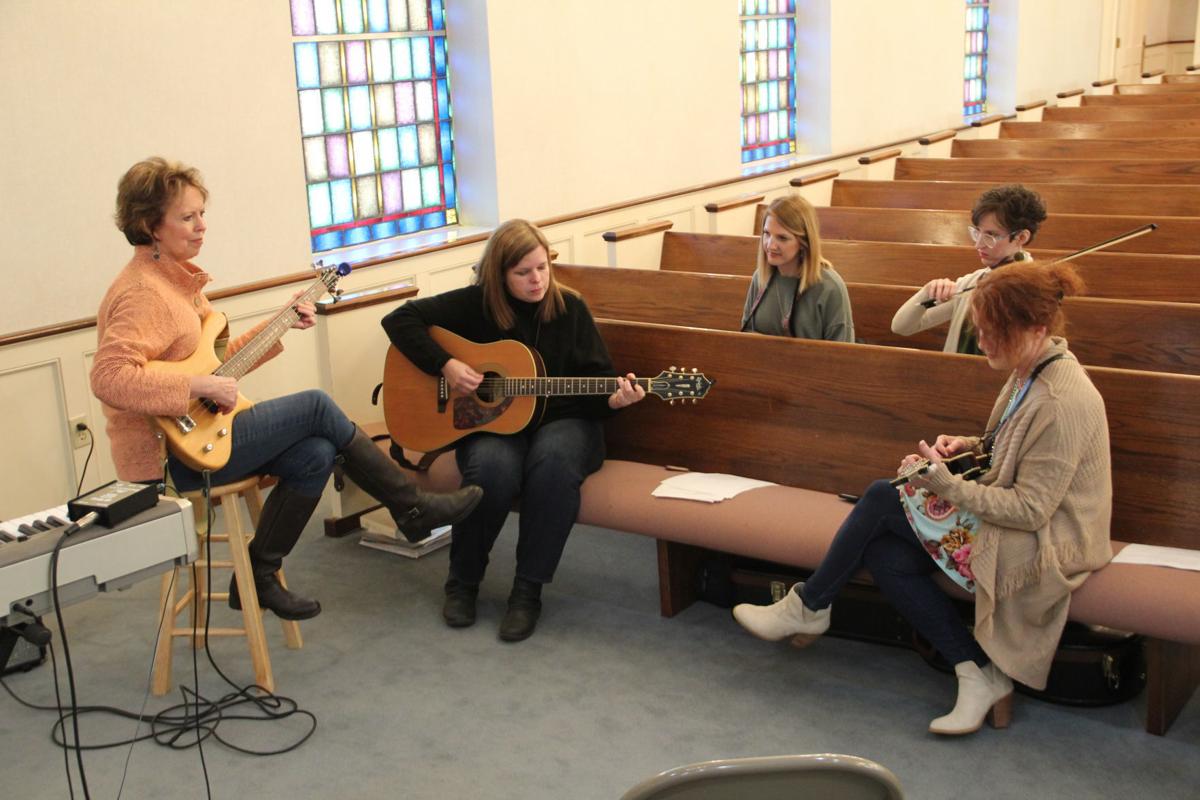 Members of The Grass Skirts practice inside the sanctuary at Trinity Baptist Church. The group, formed in 2014, have opened for bluegrass and gospel groups such as The Isaacs, The Steeles, Scott Mulvahill and Adam Crabb. They’ve written and produced two songs, ‘Willow Tree’ and ‘Mary and Martha.’ Both can be found on iTunes and Spotify. 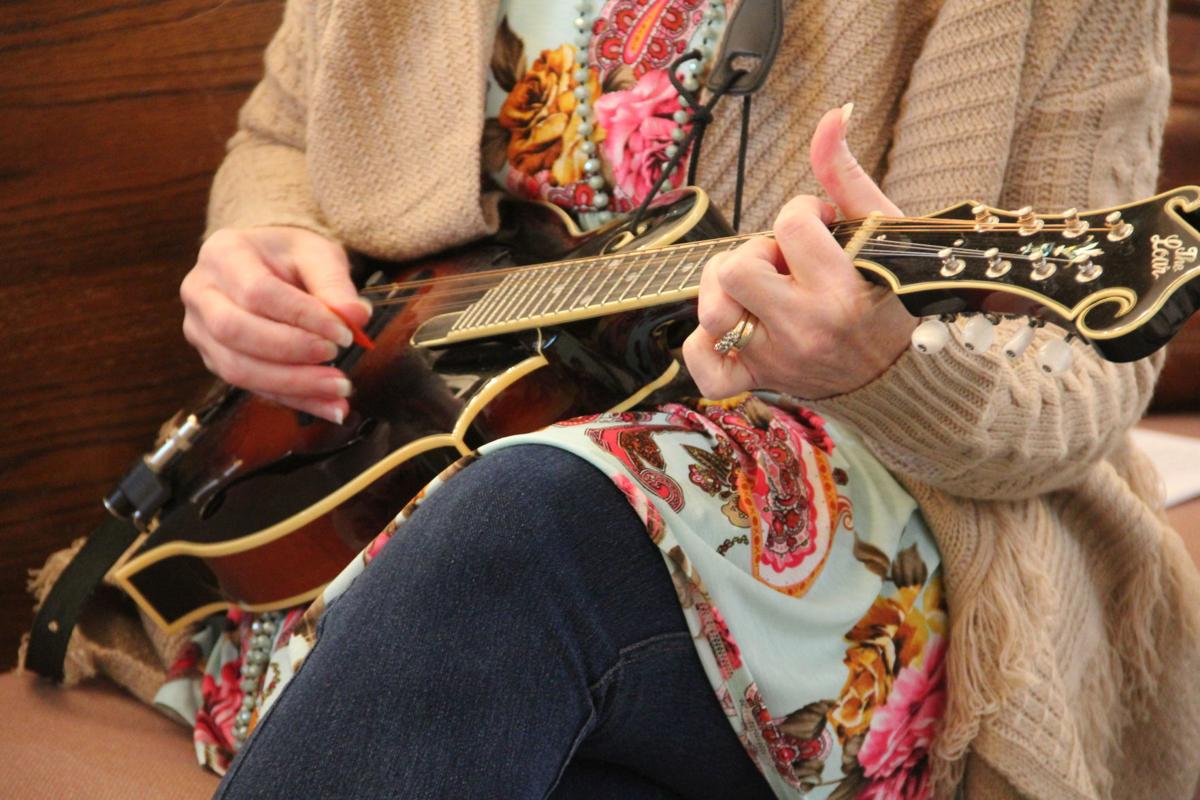 Although all five members of the group sing, each plays her own unique instrument. Together, they harmonize to give The Grass Skirts its folksy, traditional bluegrass sound.

Members of The Grass Skirts practice inside the sanctuary at Trinity Baptist Church. The group, formed in 2014, have opened for bluegrass and gospel groups such as The Isaacs, The Steeles, Scott Mulvahill and Adam Crabb. They’ve written and produced two songs, ‘Willow Tree’ and ‘Mary and Martha.’ Both can be found on iTunes and Spotify.

Although all five members of the group sing, each plays her own unique instrument. Together, they harmonize to give The Grass Skirts its folksy, traditional bluegrass sound.

It’s been said of the Appalachian/folksy sound of bluegrass music, “Everybody loves bluegrass, some just don’t know it yet.”

In 2014, the members of The Grass Skirts found the adage to be true.

“There was a bluegrass contest in New Albany, and there was a cash prize,” Grace Bridges, the fiddle player for the band, joked as she talked about the first time she brought the old-time sound to the attention of her friends.

Looking back at that pivotal moment, the band members laugh about it with the same graceful harmony with which they sing.

The all-female quintet first sang in a larger praise band at Trinity Baptist Church in Fulton when the gals decided to give Bridges’s bluegrass suggestion a try.

After all, there was that cash prize.

“And we thought, it would be more fun if it was all girls,” said Beth Douglas, who sings vocals and plays mandolin (among many other instruments).

According to her bandmates, “Beth can play anything.”

No matter the means or circumstances piled along the pathway that carried The Grass Skirts to their musical destiny, the musicians all agree on one thing: The stars aligned the first time they sang together.

“When Grace introduced it to us, the sound just meshed,” Amy Rhyne said. The quiet, reserved washboard player and vocalist added, “It felt like it was just meant for us to sing it.”

The group started their harmonious adventure doing well-known music. Their first song was the hymn “He Set Me Free.”

Although they lost that first competition, according to their guitarist and vocalist Kelly Harrison, what they found was much sweeter.

“We have a special bond in the group,” she noted unequivocally. “We are family.”

Harrison said people often ask if the members of the group are sisters. It’s a compliment that fares well with their bass player, Dean Turner, who happens to be Harrison’s mother.

“I love these girls, and I love playing music with them,” she said.

Turner played many years in another band, Class of 65, with her late husband, Pat. Motown and soul was the genre of music the couple favored. But now Dean, a retired nurse, is sold on rootsy joys of bluegrass music.

“I especially love their harmony,” she said. “It’s special.”

In May 2015, The Grass Skirts placed third in the Down from the Hills Bluegrass Festival. From there, their journey led them to open for bluegrass and gospel groups across the region, including The Isaacs, The Steeles, Scott Mulvahill and Adam Crabb.

“We’ve also placed in other competitions and played at many festivals, like Uncle Dave Mason Days in Murfreesboro, Tennessee,” Douglas said.

In Sept. 2017, the band released its first single, “Willow Tree.” Written by Beth Douglas, Kelly Harrison and her husband, Bryan, the song won WTVA’s Battle for the Bain contest in 2019. With their free recording session as winnings, the Skirts recorded their second single, “Mary and Martha,” penned by Beth’s husband, Tom.

What started as a notion to win a contest with an all-female bluegrass band quickly turned into something much broader and deeper for the five ladies. Each with families and careers, they soon found the music they played brought them closer as friends and drew them into a deeper faith.

Amy Rhyne’s career as Dyslexia Coordinator in the Tupelo Public School System is fulfilling, but she said it was when she heard their blended voices that she knew wanted to continue pursuing the sound.

“Bluegrass gospel speaks to my soul,” she said. “I think that’s something we all feel.”

Kelly Harrison agrees. Her day job as Production Manager at Kids Creations keeps her busy, but it’s her stint with The Grass Skirts that brings her great joy.

“I love singing, especially harmony. It’s one of my most favorite things in the world,” Harrison said. “But what I love about the band is singing songs that lift up Jesus Christ.”

Beth Douglas spends her days as an Ultrasound Technologist. She says the fellowship or sisterhood within the group is what she loves.

“We may cry one minute and share our thoughts the next,” she said. “Our songs give hope in a world that offers little hope. We are most proud that our music is about the Lord.”

Growing up, Grace Bridges was trained in classical violin. She teaches cello, viola and violin in her studio, Mrs. Grace’s Violin Studio, but she admits playing the fiddle in a bluegrass band is something she dearly loves. It’s the Appalachian style and old-time sounds that move her.

“Even though I grew up classically trained, it’s the older music that I really like,” she said.

The Grass Skirts have found harmony in more than just the songs they sing. It’s something they hope to bring to stages when they play. A heartfelt song, an old-time sound, a state of mind, all found in the music they play. They hope their audience hears it, too, even if they are listening to the bluegrass for the first time.

After all, everybody loves bluegrass. They just don’t know it yet.