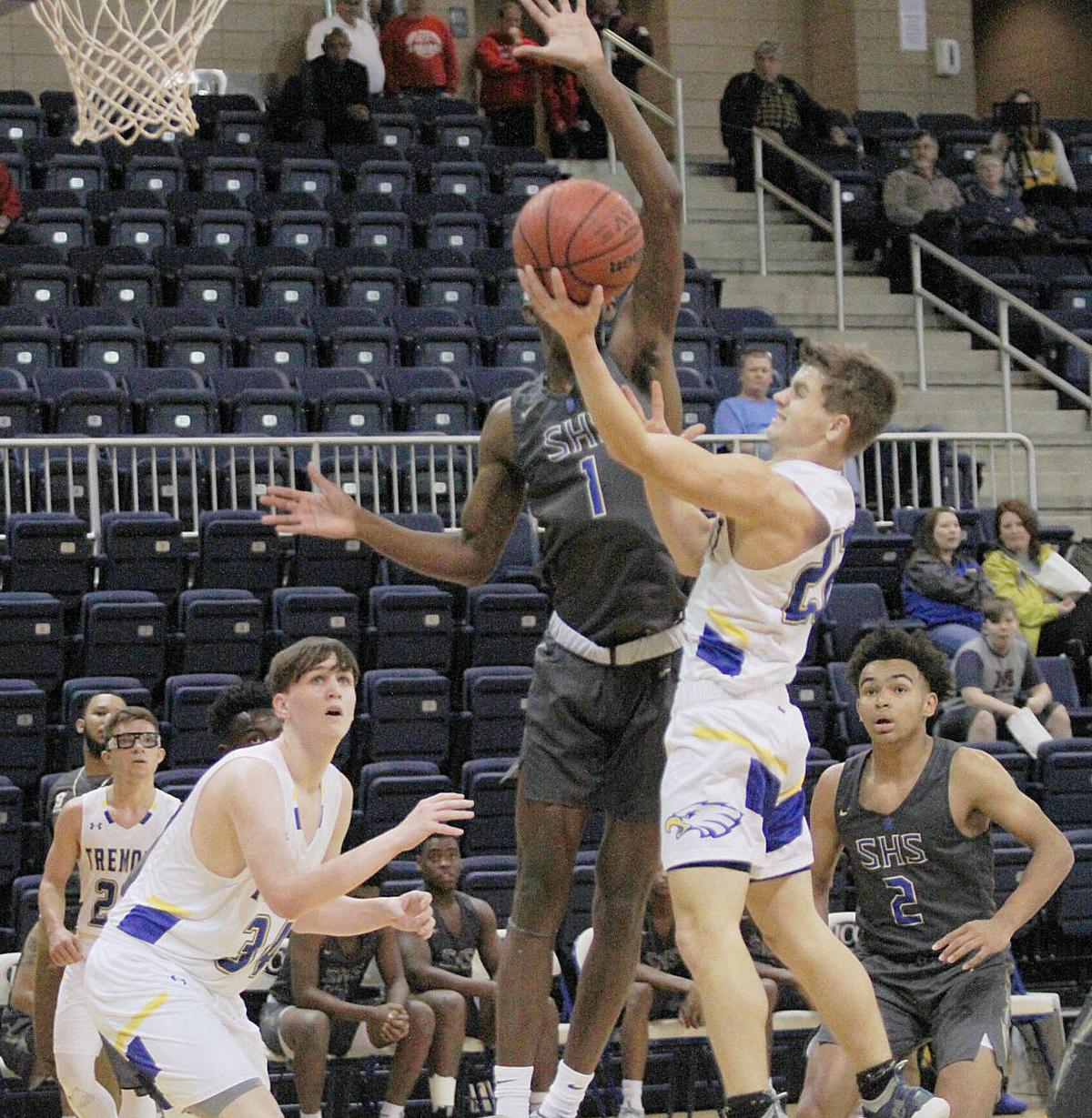 Tremont’s Jesse Sartin has his shot blocked in the first half of the Eagles loss at Rumble By the River. Points were hard to come by in the opening minutes for both teams. 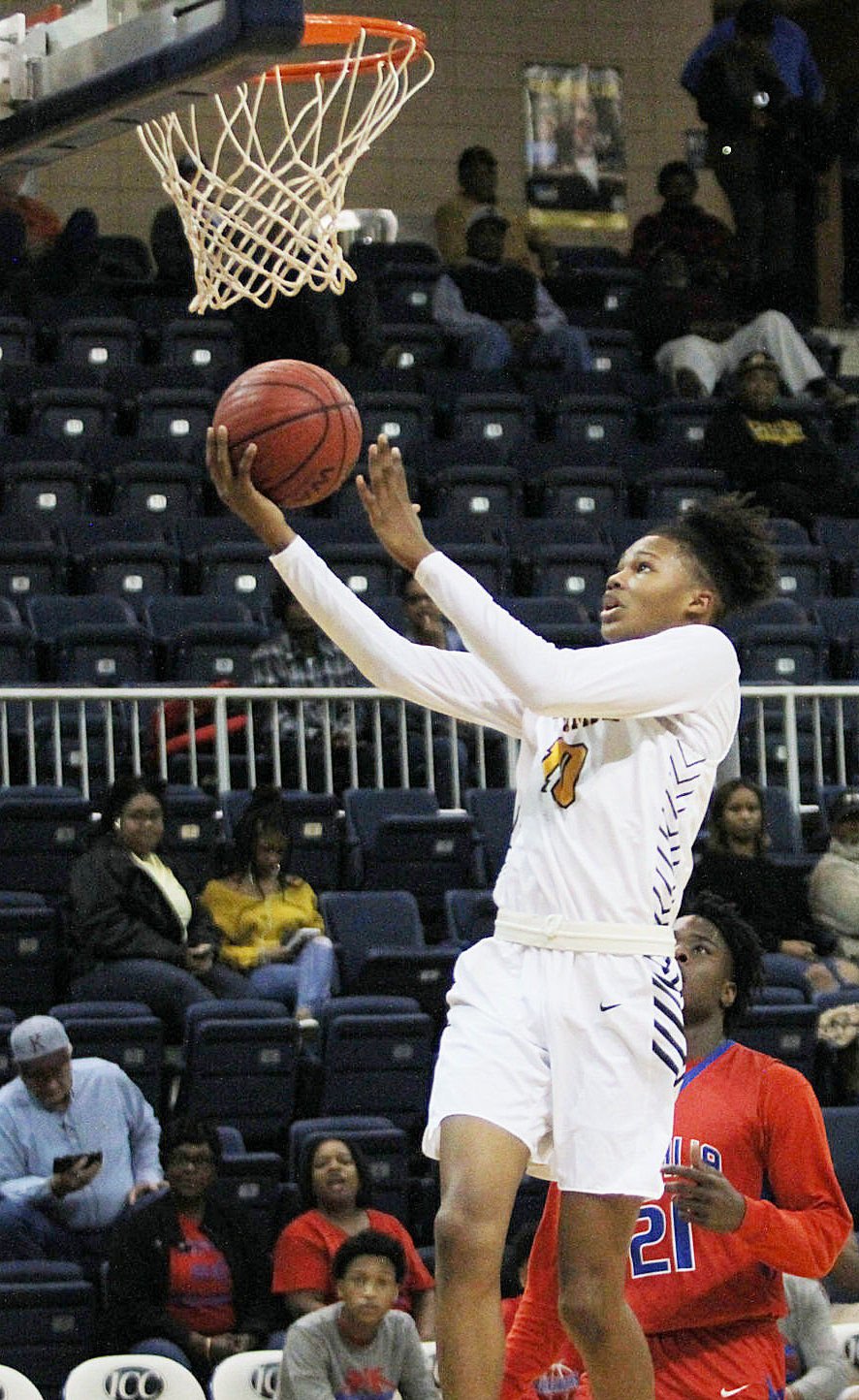 IAHS sophomore Arvesta Troupe scores after driving through traffic in the lane during the first half of the Indians’ game at Rumble By the River.

Tremont’s Jesse Sartin has his shot blocked in the first half of the Eagles loss at Rumble By the River. Points were hard to come by in the opening minutes for both teams.

IAHS sophomore Arvesta Troupe scores after driving through traffic in the lane during the first half of the Indians’ game at Rumble By the River.

Boys high school basketball teams from across North Mississippi and North Alabama descended on Fulton Saturday, Dec. 28, for Rumble by the River, a full day of games at Itawamba Community College’s Davis Events Center. Both Tremont Attendance Center and Itawamba Agricultural High School participated in the event, although neither saw much success.

Tremont played Senatobia High School in the day’s second game. Like they have often this season, the Eagles faced an opponent from a larger classification but could not pick up the win. The 45-42 loss was their third of the season.

Neither team scored until sophomore Tyler Whitaker made a pair of free throws midway through the first quarter. The Eagles held the Warriors without a field goal until the final three seconds of the period. Tremont held an 8-6 lead at the end of the first quarter.

The Eagles opened the second quarter with a pass from junior Devin Pounders to junior Jonas Grimmer, who scored on the play. Both teams continued to struggle to score from the field in the second quarter. Senatobia led Tremont 19-16 at the half.

Early in the third, juniors Konner Sartin and Bayden Burroughs hit 3-pointers on back-to-back offensive possessions to tie and give the Eagles the lead. They held a 30-25 advantage heading to the final eight minutes.

Senatobia called a timeout two minutes into the final quarter when Tremont had built a 37-28 lead. After the break, the Warriors erased the Eagles’ lead and tied it up at 38-38 with three minutes to play.

A pair of free throws gave Senatobia a 45-42 lead, and Tremont’s head coach, Brady Ramey, called a timeout to draw up a play. The 3-point shot rolled around the rim before falling off. The Eagles fouled and had one more chance at a long 3-pointer, but the shot came up just short.

Jesse Sartin led the Eagles with 13 points, and Chase Parker had 12 points.

IAHS played Byhalia later that day. They didn’t fare any better than their fellow Itawamba team.

The first quarter ended with IAHS trailing Byhalia 14-9. Only two fouls, total, were called in the period.

The second opened with some excitement for the local team. IAHS forced a turnover and senior Carter Wood hit a 3-pointer. About a minute later, he hit another to tie the game at 24-24. Byhalia quickly bounced back to regain some of the ground they lost. They led 29-27 at the break.

In the third quarter, IAHS only scored 5 points. They were down 41-32 heading to the fourth.

Unfortunately for Itawamba’s Indians, Byhalia found some steam in the final quarter. Their offense exploded in the fourth, and IAHS couldn’t keep up. By the time the final buzzer sounded, Byhalia had picked up a 63-47 win.