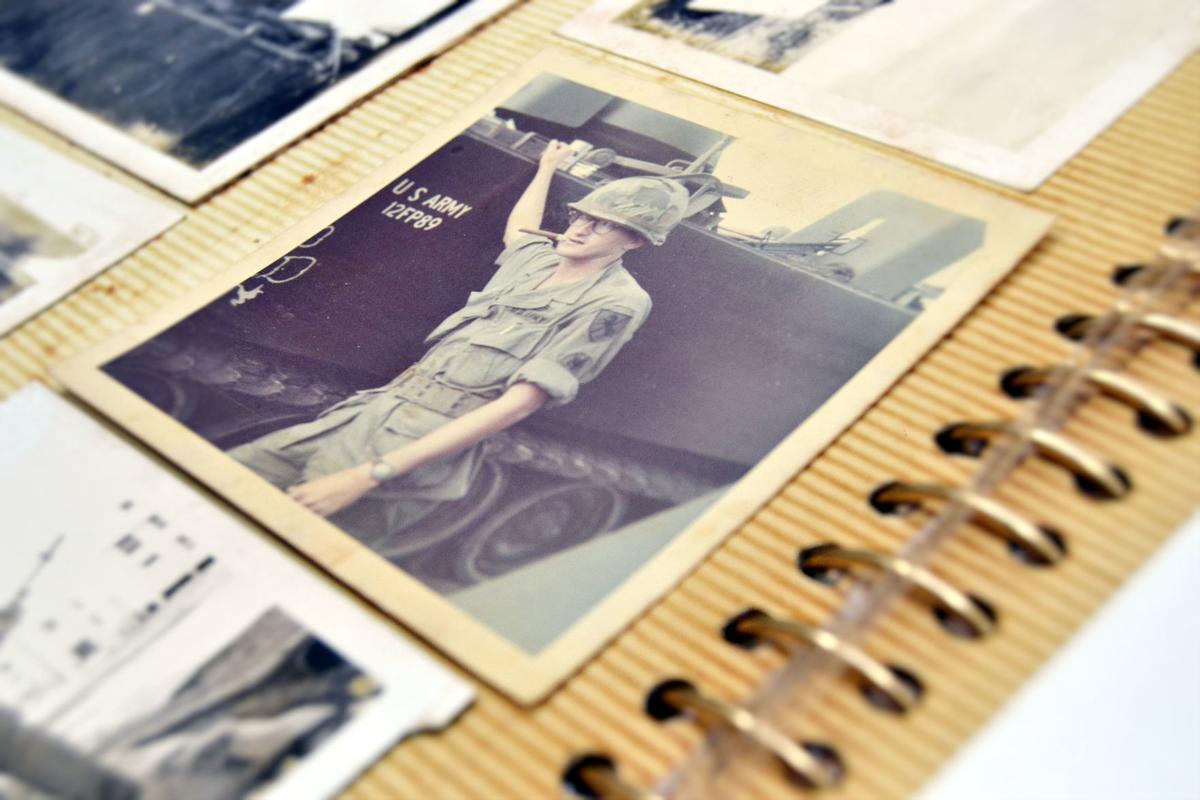 Sergeant Russell Clayton leans against a tank during his tour in Vietnam. Clayton was awarded the Army Commendation Medal for Heroism and the Bronze Star. 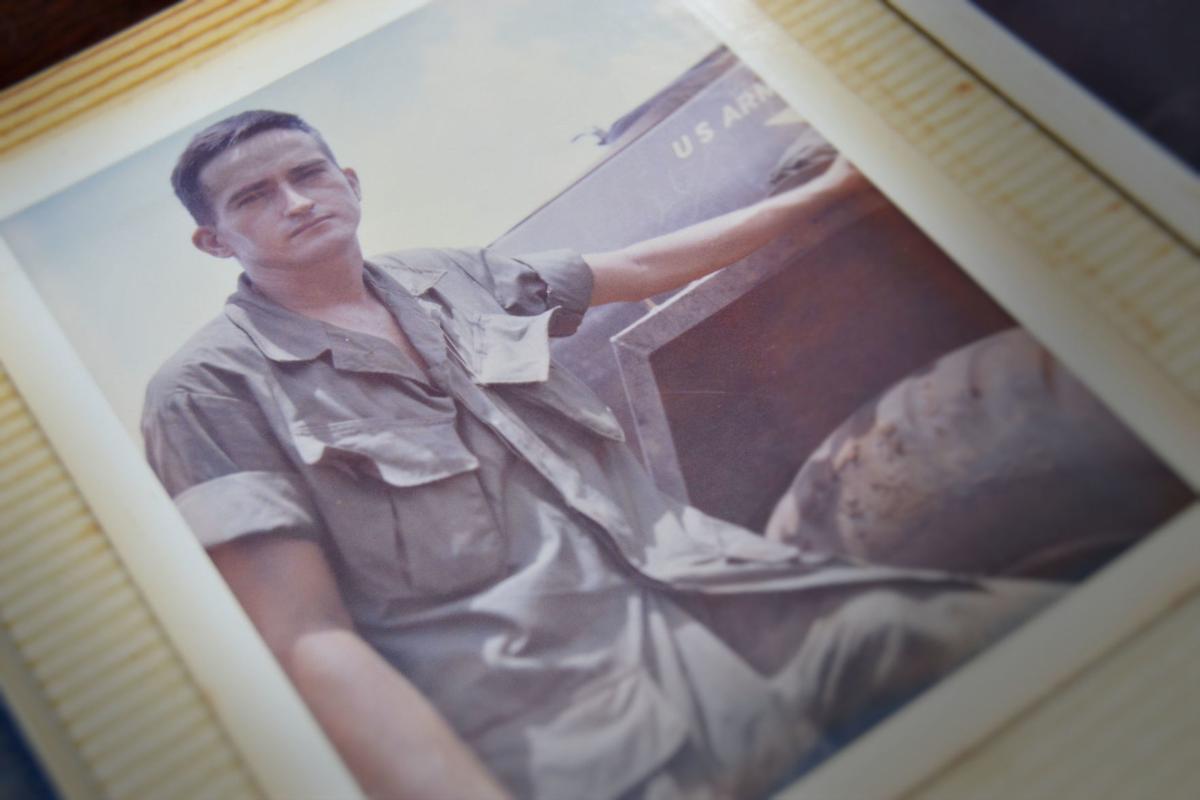 Clayton was drafted to the United States Army in November 1967. He returned home in late 1969. 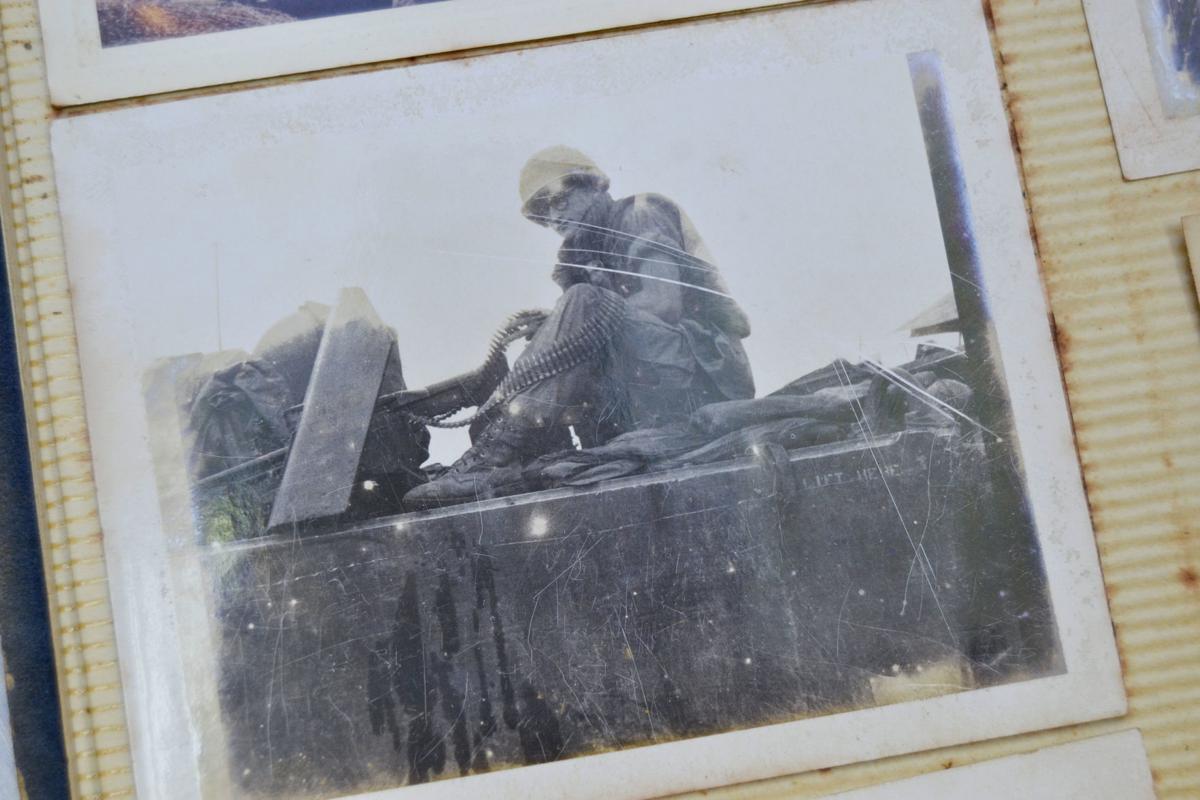 Specialist Clayton stood atop the driver’s hatch of the tank and layed down intense and deadly fire on his unit’s attackers. 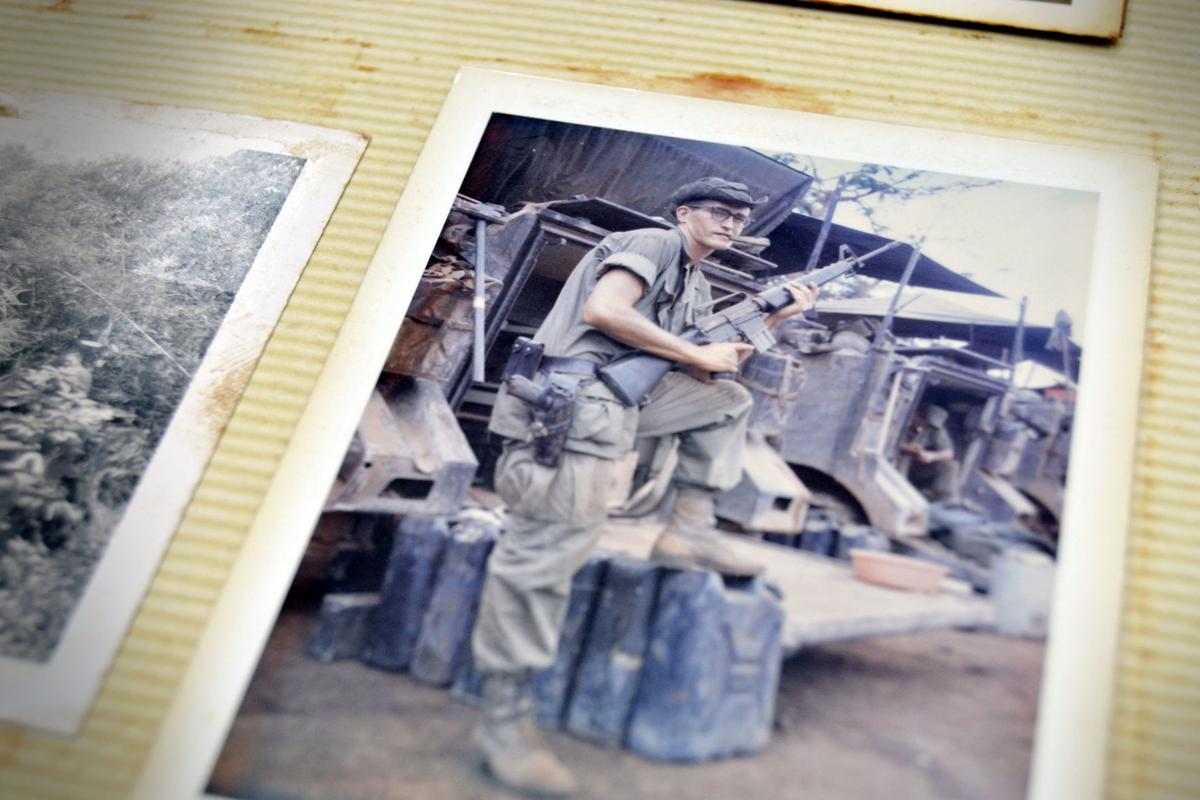 Veterans: Clayton 05 A young Clayton smiles as he poses for a picture holding his machine gun at his units base camp.

Sergeant Russell Clayton leans against a tank during his tour in Vietnam. Clayton was awarded the Army Commendation Medal for Heroism and the Bronze Star.

Clayton was drafted to the United States Army in November 1967. He returned home in late 1969.

Specialist Clayton stood atop the driver’s hatch of the tank and layed down intense and deadly fire on his unit’s attackers.

Veterans: Clayton 05 A young Clayton smiles as he poses for a picture holding his machine gun at his units base camp.

Thomas Clayton handed over the faded photo album, a book that wears each of its decades like a badge of honor.

The edges of its cover are ragged, the velvety-blue worn away to the cardboard underneath. At its center is a lenticular image of a ship sailing turbulent waters. Seagulls fly peacefully by as the vessel rolls to one side.

The pages crackle as the book is gently opened. Each page, yellowed with time, has been filled with photos, many more than a half-century old. In them, a slender young man in army fatigues smokes a cigar, or holds a machine gun, or smiles from the bed of a military truck as it wades deep into the impenetrable brush of a Vietnamese jungle.

“He deserves this … to be remembered,” Thomas Clayton said of his brother, Russell, and his service during the Vietnam War.

Clayton’s visibly moved when talking about the sacrifices his brother, and other young soldiers made. He doesn’t attempt to hide the sadness in his voice.

He said his brother “wasn’t the same” after he returned home from the war. The 21-year-old Dorsey resident who left to serve was jovial, happy. The person who returned outwardly seemed much the same. But those who knew him best could tell Russell Clayton had changed.

Clayton recalled his mother saying there were many times after Russell returned when he would awaken in the night, screaming.

The bloody battles he had been a part of had followed him home.

Russell Clayton was drafted by the United States Army in November, 1967. When he returned home to Dorsey in late 1969, he spoke very little of his time overseas. Not at all, in fact.

The photographs do the speaking for him.

In one picture, Clayton gives the camera the slightest of smiles. In another, he wears a handkerchief tied around his neck bearing the “Blackhorse” emblem, the combat service identification badge of the 11th Armored Cavalry Regiment. In yet another, he sits atop a tank wearing a military hard hat with ammunition draped across one leg. His demeanor appears focused and intense.

Other pictures of Clayton with his brothers-in-arms give no clue as to whether they were taken before or after the violent clash of November, 1968.

There is little to document the fierce fight. Like every other aspect of his military service, Clayton never mentioned it. There are other records, of course. On May 8, 1969, The Itawamba County Times published the United States Army’s official statement after Clayton was awarded two medals for heroism.

According to the article, Clayton was awarded the Army Commendation Medal for Heroism following his actions on Nov. 27, 1968. He was also awarded a Bronze Star Medal for his services in Vietnam.

The article goes on to describe the certificate of award that accompanied Clayton’s Army Commendation Medal. The certificate details the battle that earned Clayton the recognition.

On Nov. 27, 1968, while serving as a scout observer with Troop C, 1st Squadron, 11th Armored Calvary Regiment, Clayton and his brothers-in-arms came under fire from an enemy force while participating in a combined reconnaissance in force operation in the vicinity of Loe Ninh. According to the certificate, the enemy troops attacked the regiment from a fortified base camp using small arms, automatic weapons and anti-tank rockets.

“Specialist Clayton’s troops immediately formed into an assault formation and advanced toward the entrenched enemy,” the certificate reads. “While attacking the Communist emplacements, the .50 caliber machine gun on Specialist Clayton’s vehicle malfunctioned and jammed. With complete disregard for his personal safety, Specialist Clayton dismounted his M-60 machine gun from the side of his vehicle and stood atop the driver’s hatch, laying down on intense and deadly barrage of machine-gun fire upon one of the enemy bunkers. His accurate fire was fatal to the enemy elements therein.”

“Specialist Four Clayton’s courage, unwavering devotion to duty and complete disregard of personal safety were in keeping with the highest traditions of the military service and reflect great credit upon himself, his unit and the United States Army,” the certificate concludes.

While hundreds of thousands of Americans were preparing for the Thanksgiving holiday, Clayton was in the midst of an assault on himself and the men in his unit. His actions saved many.

But it carried a heavy price. One he paid until the day he died.

Russell Clayton was killed in a car accident on Sept. 2, 2017, just one day shy of his 71st birthday. He was buried with military honors, a tribute for the sacrifices he made in the name of his country.

Little remains of the decorated soldier’s days in Vietnam. Yellowed photos in a decaying book and an old newspaper article documenting his actions are all that’s left to tell his story.

“His time there affected his personal life,” Thomas Clayton said of his brother. Again, the sadness crept into his voice. “He mostly wanted to be alone.”

Much like the ship on the cover of his brother’s photo album, Russell Clayton could never stop battling the turbulent waters that formed on Nov. 27, 1968. Those waves pounded against him until the day he died. They will never truly recede as long as there are people left who remember both versions of him.