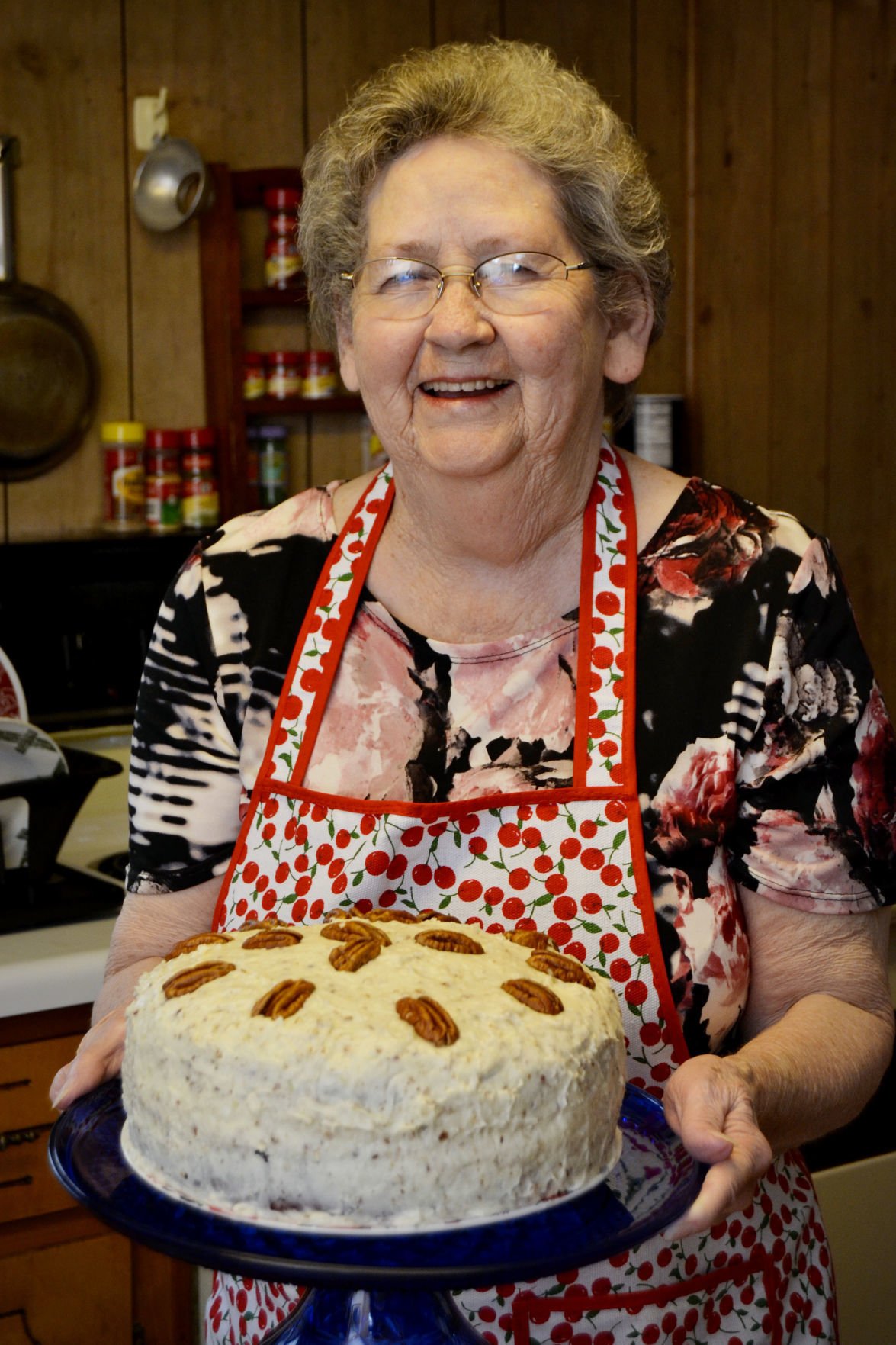 Ryan-Salem’s Jimmie Sue Robinson, or “Jim” as she prefers, has been cooking inside the same tiny kitchen since she was 10 years old. She still lives in her childhood home, which if filled with the memories of the countless meals eaten there.

Ryan-Salem’s Jimmie Sue Robinson, or “Jim” as she prefers, has been cooking inside the same tiny kitchen since she was 10 years old. She still lives in her childhood home, which if filled with the memories of the countless meals eaten there.

The sisters gathered around their aunt’s dining room table, laughing and talking as they took their seats. A feast had been laid out, enough food to feed three times as many people as were seated in the small dining room – chicken and dumplings, mashed potatoes and gravy, slaw, a pan of dressing, breaded chicken strips, creamed corn and rolls made from scratch. Back inside the kitchen, a couple of cakes – coconut and red velvet – awaited slicing.

It’s almost always like this when Jimmie Sue Robinson cooks, at least according to her nieces. Rare is the visit to Robinson’s house that doesn’t include a meal, and rarer still are those meals small.

“She will not let us leave without cooking a meal for us,” said Kim Warren, one of the trio of nieces visiting Robinson that day. Even if it’s only something as simple as a hamburger, Robinson will not let her nieces, or any of her family, go hungry.

Robinson prepares these bounties in the tiny, almost closet-like kitchen of her childhood home in the Ryan-Salem Community. The space is modest even by modest standards – maybe dozen feet by another dozen feet – with just two small counters on which to work. Pans dangle from hooks attached to the paneled walls, and the top of her stove is lined with a variety of spices and other basics. A scuffed wooden table in one corner provides some additional room to prep food. A pair of chairs and a short wooden bench allows for seating.

It’s in this tiny kitchen that Robinson learned to cook. It’s where her mama first taught her to make sawmill gravy, fried squirrel and dumplings, turnip greens and chocolate gravy. Her nieces used to play in this home, eat their meals at the table inside that simple kitchen. There used to be a sprawling apple tree where a shed now stands. Robinson remembers picking apples from that tree, slicing them and letting them dry on that kitchen table. The house is filled with memories of countless meals.

“That’s why we like to come here,” Warren said, seated with two of her three sisters – Rosa Taylor and Margie Thomas – inside her aunt and uncle’s living room. Photographs of the Robinsons’ family … kids and grandkids, mostly … filled nearly every inch of every wall. “This is home. When we come here, they treat us like their kids.”

“You are our kids, hon,” he said, affection in the low rumble of his voice.

It’s been that way since their mother, Jimmie Sue Robinson’s sister Billie Rue Wood, died 13 years ago. With her gone, Robinson stepped in as a surrogate mother to the sisters.

“Our mama used to cook for us every Sunday. That’s why we miss it,” Taylor said.

Robinson doesn’t cook for her nieces every Sunday. That honor is reserved for her two sons, Joel and Roy Lee, and their families. (“That’s what they depend on all week long,” she said.) Although the big meals may not come weekly, the sisters – including Patti Heering, who wasn’t around on this particular day – drop by for one of Robinson’s feasts once a month or so.

“They give me about 30 minutes warning,” Robinson said with a curt laugh.

Robinson said she doesn’t cook much, although her nieces clarified this probably meant she doesn’t cook three full meals each day. She cooks at least one, though, and often makes food for her church family. She rarely, if ever, uses written recipes. It all comes from taste, experience and memory.

To Robinson, cooking and family are natural companions. Gatherings, even small ones, mean scratch-made meals around well-worn tables. They mean conversation and nostalgia, a chance to reminisce and relish the flavors of a lifetime’s worth of favorite dishes and the memories that go with them.

“It brings the family together,” Robinson said of cooking and why she does so much of it. “If I don’t cook for them, they wouldn’t come see me.”

It was a joke, and probably mostly untrue. Still, having a slice of coconut cake and a cup of coffee at the ready couldn’t hurt.