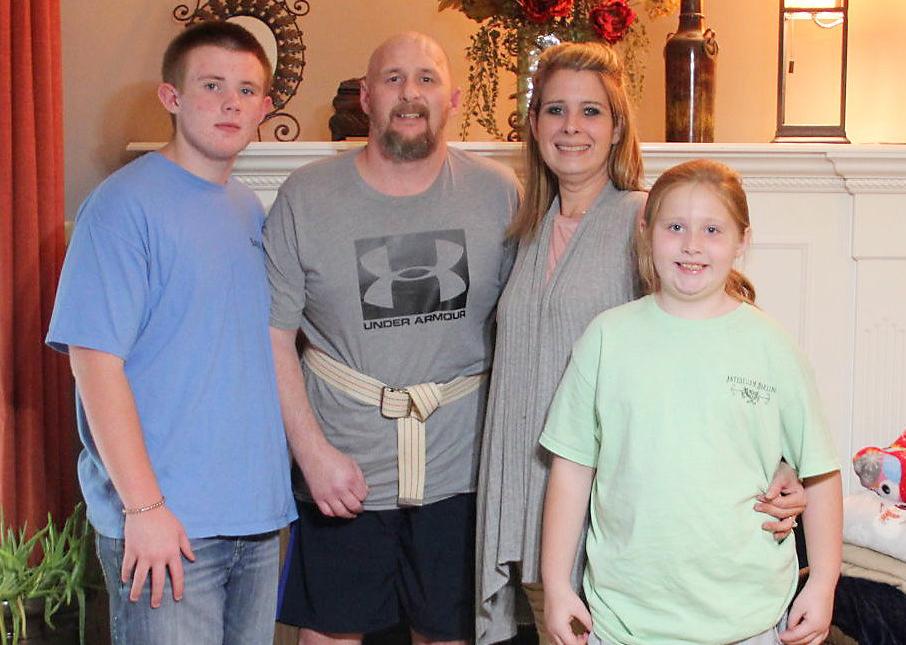 A massive stroke early this year nearly killed Houston Community’s Lee Graham, second from left. Recovery has been a slow and often frustrating process for the Graham family, which also includes, from left, Graham’s son, Briar; wife, Kim; and daughter, Leah. But the Grahams see every small win as a major victory, and Lee Graham’s insistence on voting in the Aug. 6 primary was definitely a major victory. 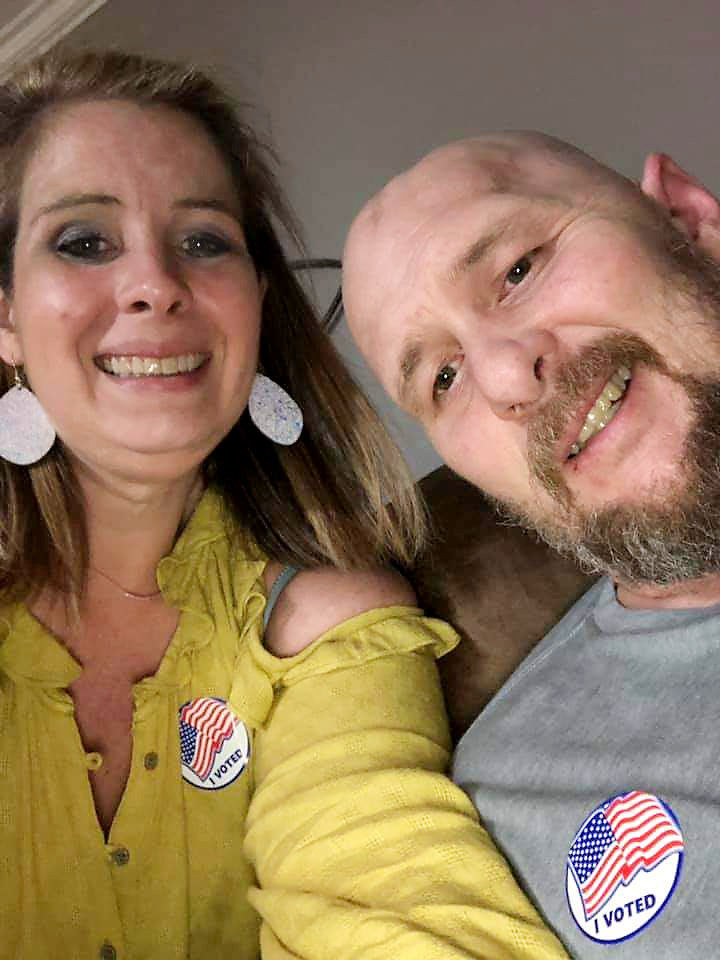 Lee Graham and his wife, Kim, take a selfie after voting in the Aug. 6 primary elections. Lee Graham was adamant about voting, despite being deep in the recovery process.

A massive stroke early this year nearly killed Houston Community’s Lee Graham, second from left. Recovery has been a slow and often frustrating process for the Graham family, which also includes, from left, Graham’s son, Briar; wife, Kim; and daughter, Leah. But the Grahams see every small win as a major victory, and Lee Graham’s insistence on voting in the Aug. 6 primary was definitely a major victory.

Lee Graham and his wife, Kim, take a selfie after voting in the Aug. 6 primary elections. Lee Graham was adamant about voting, despite being deep in the recovery process.

A small flag next to their garage greets back door guests at the home of Lee and Kim Graham. A message, printed in flowing lettering, reads, “Life is good.”

As it is for many long-haul truck drivers, it was common for Graham, 42, to give his wife a “Sunday goodbye kiss” before heading out on the road. On a cold January morning, the couple walked out on the porch of their home to carry out their farewell routine. For a brief moment, they discussed their future plans. Lee told Kim he wanted to take another shot at running for tax assessor in the upcoming election. He planned to head to the courthouse to qualify as soon as he returned home.

“He kissed me and said, ‘This is gonna be our year, Babe,’ and he headed out for Dallas, Texas,” Kim Graham said. Her husband’s enthusiasm and optimistic words still echo in her mind.

Within 48 hours, the Grahams’ lives would be drastically changed.

On Tuesday, January 8, Kim was about to head to Memphis to take Briar for his three-month checkup following a spinal fusion. He suffers from Scheuermann’s Disease and had undergone a the difficult surgery in late 2018.

“My phone rang and it was the dispatcher,” Kim said. “Lee had told him he didn’t feel right and I told him that Lee had problems with his sugar. He told me he was calling an ambulance and I needed to get to there as quickly as I could.”

She received a text from her husband shortly after that conversation that simply said, “I love,” and the words stopped.

“I knew when I got his text it was bad,” she said.

Kim made arrangements for her mother to take her young son to Memphis, and she headed to Dallas. As she made her way to the hospital, Kim received a phone call from the doctor. Her husband’s diagnosis was a massive stroke. His carotid artery was blocked and had blown out as the surgeon tried to clear it.

“After I made it to Dallas, they let me see him,” Kim said. “I just laid across his chest and begged God not to take him from me and the kids.”

The stroke was on the left side and frontal lobe of Graham’s brain. After the initial surgery, his brain began to swell and left surgeons no option but to perform a craniotomy, removing a large portion of his skull in order to save his life.

Lee remained on a ventilator for five days.

“The doctor told me he would never come off the vent, and he would need a feeding tube for the rest of his life,” Kim said. “We just kept praying.”

While Lee Graham was in intensive care, doctors began turning the vent down. To their surprise, Graham was breathing on his own. Their next step was to see if he could swallow. After determining he could, they began to sit him up.

“He was completely limp and could not hold his head up,” Kim Graham said. “But any way you look at it, it was still a miracle.”

Lee Graham spent two weeks at Baylor University Medical Center in Dallas and was then transferred to North Mississippi Medical Center (NMMC) for further treatment and therapy. However, the portion of his skull removed by doctors would remain in a freezer at Baylor until it was time to reattach it.

After eight weeks of hospitalization at NMMC, Graham was sent to Shepherd’s Clinic in Atlanta for specialized therapy and care.

Kim Graham stayed by her husband’s side throughout the ordeal and kept family and friends updated about his condition through social media. Lee Graham’s difficult recovery, and his wife’s role as caregiver, often left the couple exhausted. But the progress he was making gave them hope. Amid paralysis in his right arm, seizures, often unbearable pain and headaches, Lee Graham was improving daily. His determination was relentless. Then again, it always has been.

“He survived a widow-maker heart attack in 2011 and being struck by lightning five years ago, the man is killing me,” Kim laughed.

After surgery to reattach his skull followed by therapy, the Graham family was finally able to return home in late April.

“We were just so thankful,” she said. “If it had not been for family, friends, the community and the churches, we would have lost everything we had. We are just grateful.”

“Yeah,” Lee agreed. There were tears in his eyes.

Kim Graham was able to return to work five months after their ordeal began. A sitter takes Lee Graham to his speech therapy, occupational therapy and physical therapy three times a week. Although his steps are slow, he is making continual improvement.

Speech continues to vex him. With only a few words currently in his vocabulary, Lee Graham’s inability to communicate brings him great frustration.

Still, he’s often able to get his point across. The first word he spoke during his recovery was “damn.” He’s said it plenty of times since then.

“We don’t even consider it a cuss word in our house anymore,” Kim Graham said with a laugh. “He does get aggravated because communication is so difficult right now. The therapist told us it would take about two years to get him back.”

“Talk bad,” Lee Graham said – his way of explaining that he isn’t able to say what he needs to say.

According to Kim Graham, the scope of what her husband can and can’t do seems to lack both rhyme and reason. Simple tasks seem beyond him, while he handles more complex ones with ease.

“It’s funny,” Graham said. “He can stand there and show you exactly where a bolt goes to fix a go-cart, but he can’t fix his own supper plate.”

During their treacherous journey to find a new normal, Kim Graham said it never occurred to her that her husband could still read. She simply assumed he couldn’t. With his very limited vocabulary, there was no way he could tell her otherwise. No simple way, at least.

Ever resourceful, he found a way. When Kim Graham came home from work on election day wearing a sticker that said, “I VOTED,” her husband spoke up. In his own way, of course.

“I walked in, and he began pointing at the sticker,” she said. “I looked at him and said you can read that? And he said, ‘Yeah.’ He kept pointing at it and I asked him do you want to go vote? And he said ‘Yeah.’”

Exactly seven months after the couples’ lighthearted and promising Tuesday morning conversation about the election, Kim Graham drove her husband to the Houston Community Center to cast his ballot.

“He did everything on his own,” she said. “He has a vision cut, and I had tell him not miss the next column. But, outside of that, he did it.”

Graham had broken yet another personal barrier. He had the “I VOTED” sticker to prove it, too.

It’s a seemingly simple thing that means the world to the Grahams.

“Something like this changes you,” Kim Graham said. “Things I used to be afraid of don’t bother me anymore. Lee being able to vote was the best day ever.”

And the little flag with a big message was there to greet them as they pulled into their Houston home.

OUR OPINION: Graham's determination should inspire us all

According to statistics released by the Itawamba County circuit clerk’s office, roughly 40% …