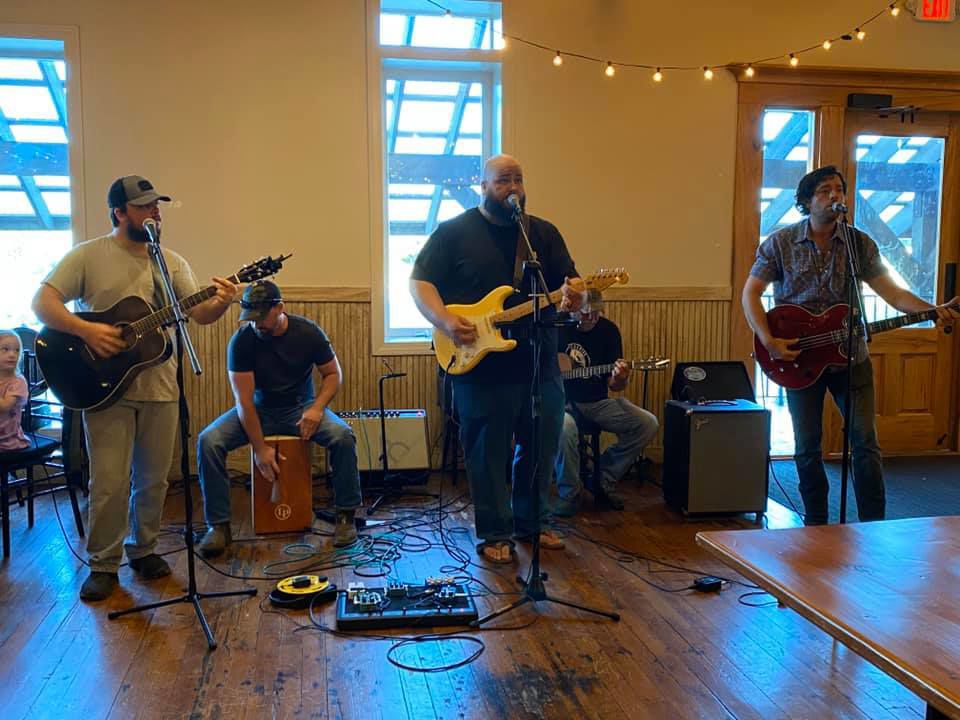 A Band of Jones performs during its single release party Saturday at Pizza Grocery in Corinth. Musicians and venues in Northeast Mississippi where live music is played are slowly coming back after a layoff due to COVID-19 restrictions. 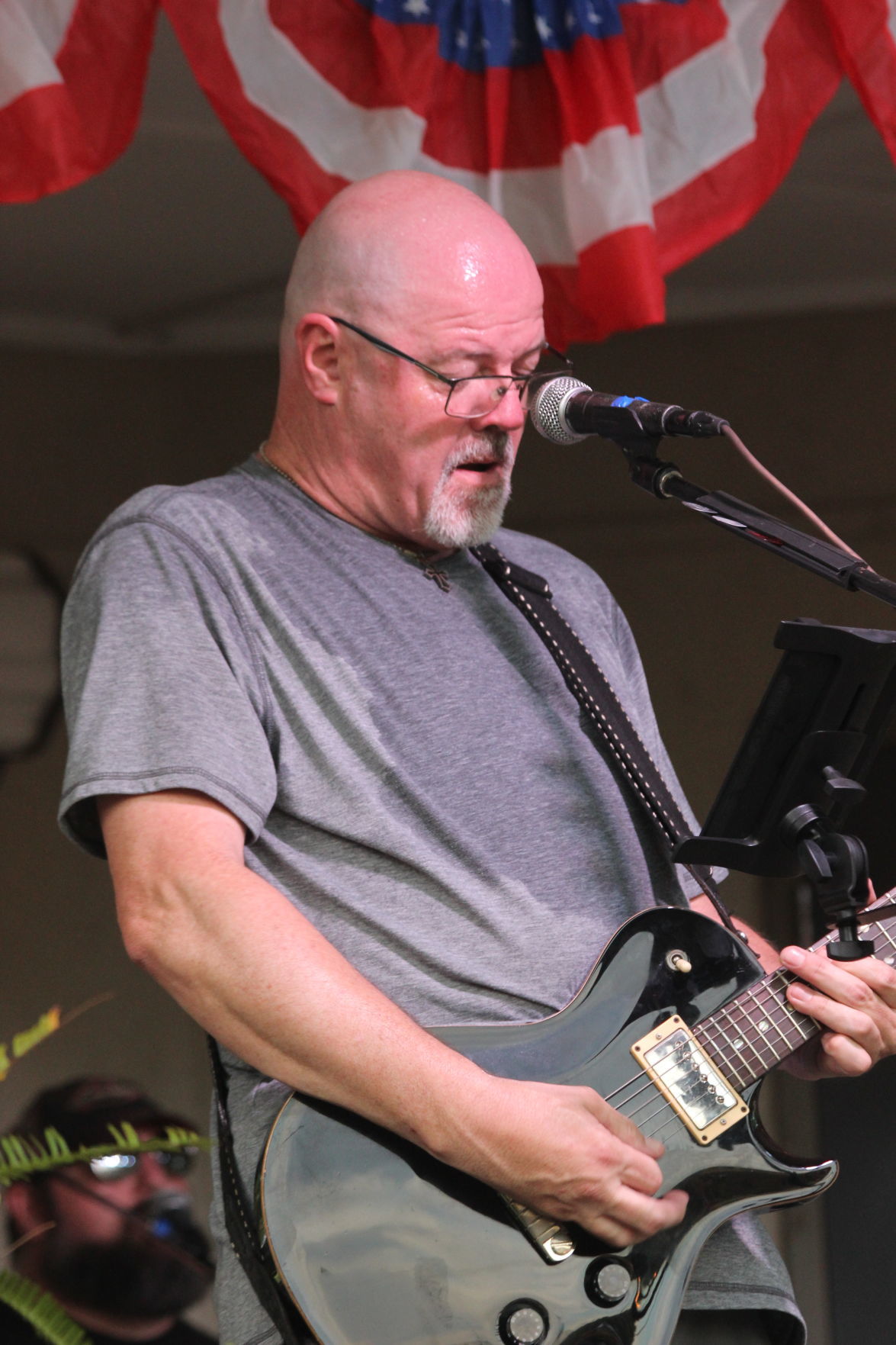 Eric Stogner, guitarist/vocalist for Full Tilt, works up a sweat while performing with his band during a 2018 Fourth of July performance in Guntown. Stogner is returning to live performances after a layoff due to the pandemic.

A Band of Jones performs during its single release party Saturday at Pizza Grocery in Corinth. Musicians and venues in Northeast Mississippi where live music is played are slowly coming back after a layoff due to COVID-19 restrictions.

Eric Stogner, guitarist/vocalist for Full Tilt, works up a sweat while performing with his band during a 2018 Fourth of July performance in Guntown. Stogner is returning to live performances after a layoff due to the pandemic.

The Tupelo rock trio, which hadn’t played a gig since Feb. 21, made its live comeback from a COVID-19 layoff with a rousing performance at Steele’s Dive. From the moment the band cranked up its opening song, Tom Petty and the Heartbreakers’ “Mary Jane’s Last Dance,” Stogner said everything felt all right again.

“Man, I tell you what, we missed that. And everybody there acted like they missed us, too,” said the guitarist/vocalist. “It was a fun night.”

With the easing of safety restrictions, live music is slowly coming back in Northeast Mississippi. Restaurants, bars and nightclubs are scheduling the musicians who have been silent during the pandemic except for live streaming performances by the musicians.

While the venues are eager to bring back live music, they’re doing so with some caution.

The layoff affected full-time musicians like Stogner, who also teaches music for his income.

“I went from four gigs a week and 28 students to zero gigs and only about 10 students, which I taught online with them like a video chat,” he said. “For the past 20 years, all I’ve done is played gigs and taught lessons. I admit it, it hurt my heart when we shut down and didn’t get to play music with my friends.”

As the easing of restrictions began to take effect, Stogner has been rebuilding his performing and teaching schedule. He and Tim Floyd, member of the band Proximity Rule, have played acoustic gigs together at Driskill Fish and Steak in Plantersville and SMITH in Corinth.

Full Tilt – comprised of Stogner, drummer Bob Steinmetz and bassist Jerry Chadwick – was able to land a gig at Steele’s Dive for its comeback. The band will perform at Steele’s again Friday night.

“We still had it,” Stogner said. “We had gotten together one time, maybe an hour and a half, a couple of weeks ago. Playing at Steele’s was a last-minute thing. ... A friend told me, ‘It’s good to see y’all again,’ and I said, ‘Yeah, after all this COVID stuff, everybody was shut up at home.’ We’re all friends, but it felt more like a family reunion here. You missed seeing all the folks you’re used to seeing and dealing with.”

As the restaurants, bars and nightclubs are allowed to resume live music, Steele’s Dive owner Jason Steele said social distancing between patrons is encouraged. Stogner said he saw the challenges of social distancing from his viewpoint on the stage known as “Tupelo’s Back Porch.”

“Everybody didn’t gang up on the stage like they have at times,” Stogner said. “We had a few people dancing. There was some social distancing and some folks weren’t.”

“We’re not encouraging dancing, but it’s kind of hard,” she said. “Everybody gets together and they’re ready to be out. We’re doing the best we can.

“The governor’s orders says to keep people 12 feet away from the musicians, and we have a stage that’s pretty big,” Comer added. “We don’t put tables close to the stage and we’ve been seating every other table.”

With guidelines in place, the venues are now seeking performers to schedule. For his restaurant, Steele said he has resumed filling open dates on his schedule.

“People like Eric who are professional musicians, we’re kind of their bread-and-butter,” he said. “We keep those guys booked out for months. We have a standing agreement with Eric, Matt Nolan, Tatum Shappley, the guys who play for a living – they get a couple of acoustic gigs a month, a couple of band gigs a month, and they get to book six months out if that’s what they want to do so they know they’ve got work. And if they get something better, then we reschedule. We just try to make it as easy on those guys as we can, as long as we’ve got somebody here playing.”

In Pontotoc, Comer is quickly rebuilding her entertainment schedule. Local duo Hannah+Karly are on the schedule for Friday.

“Everybody had been off so long that all the businesses started booking everybody,” Comer said. “I had a little trouble on short notice getting people in, but booking out ahead of time is not too bad.”

At the same time Full Tilt was rocking in Tupelo, the country group A Band of Jones was performing a single release party at Pizza Grocery in Corinth. A Band of Jones, which has members from Alcorn and Tippah counties, performed its latest single, “Good As Gold,” and other songs. “Good As Gold” was released Friday for streaming and downloads.

John Spears, the guitarist, vocalist and songwriter with A Band of Jones, said the group played for about 50 people. Brian and Kelly Harrison, husband-and-wife singers from Fulton, opened the show.

“I probably had twice that many message me saying they would love to come but were still a little skittish about the coronavirus situation, which I completely understood,” Spears said. “Everybody’s just trying to get back out there.”

“I wasn’t sure if we were even going to do one, but (Pizza Grocery) was gracious enough to allow us to crash their opening weekend of dine-in,” he said. “So, it turned out pretty good.”

A Band of Jones – featuring Spears, drummer Ryan Hill, guitarists Luke Braudway and Bradley Crawford, and bassist Charlie Dicus – is gearing up for shows it booked long before the pandemic hit. The next show is Saturday night at the Aberdeen VFW.

“We had that show booked since January,” Spears said. “We had to cancel between 20, 25 shows because of the coronavirus. But I got a lot of bookings last week. A lot of restaurants and venues are starting to feel more comfortable. They’re opening and they’re looking for people that are ready to play.”

Spears said he’s glad the music scene is coming back, especially for the full-time musicians.

“I have a day job. I have been able to take care of my family, thank God,” he said. “But for some of these people, the musicians who are doing it for a living, I know it had a big effect on them. So, I’m glad things are starting to get going again.”