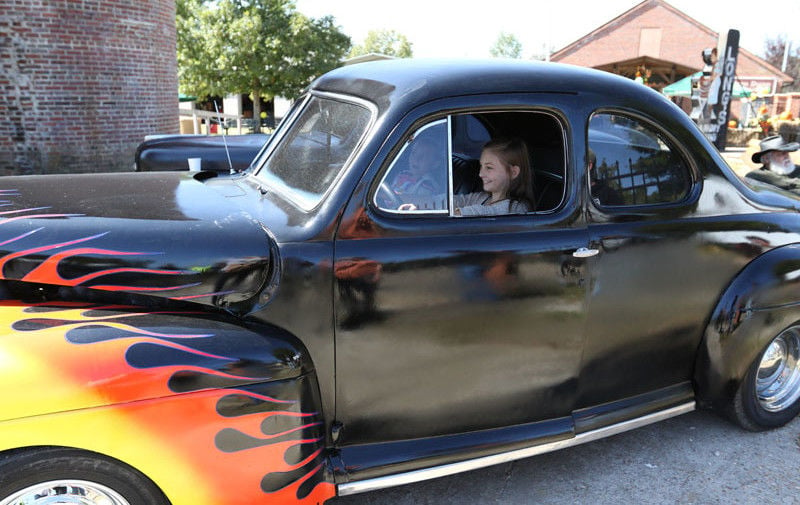 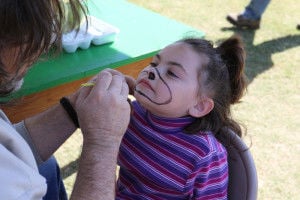 Buy at photos.djournal.comBrianna Morgan, 11, pretends to drive her sister Mary Katherine, 7, in Travis Kitchens‘ 1941 Ford Business Coupe at Saturday's Dogtrot Rockabilly Festival. Kitchens has had his hotrod for more than 41 years and painted the flames himself.

Buy at photos.djournal.comBrianna Morgan, 11, pretends to drive her sister Mary Katherine, 7, in Travis Kitchens‘ 1941 Ford Business Coupe at Saturday's Dogtrot Rockabilly Festival. Kitchens has had his hotrod for more than 41 years and painted the flames himself.

TUPELO – On the front porch of the dogtrot-style house at the Oren Dunn Museum, band members from Down South 78 sang tunes, reviving rock ‘n’ roll with a country twang – known as rockabilly – at the Dogtrot Rockabilly Fest on Saturday.

“Rockabilly was the predecessor to rock ’n’ roll,” said Rae Mathis, museum curator and festival organizer. “That’s where Elvis got his start. We are all about bringing back the past so people won’t forget.”

Previously the Fall Festival, Mathis wanted to switch up the marketing for the 3rd annual festival to emphasize all the Oren Dunn Museum has to offer.

“The dogtrot style of home was a main stay in this area,” she said. “It’s so important to not forget the past. Tupelo has the richest past.”

Mathis lined up a set of bands to keep the festival rocking with performances by the Ace Cannon Trio, Daniel Lee Perea, and Leo Mask & the County Mounties.

Along with the history of the rockabilly style of music, Mathis took historical preservation further by organizing the Rat Rod Cruise-In, a collection of cars mainly made from spare parts.

Travis Kitchens, owner of Pistol Bill Hot Rod Shop in Guntown, brought his black 1941 Ford Business Coup with red and orange flames emblazoned on the side.

He got the car, named Ole Hot Rod, when he was 18. Since then, he’s owned over 19 hot rods he routinely works on.

When he was a kid, he always wanted a model car he could put together himself. Now, he does it on a much larger scale, updating classic cars with modern modifications to make them road ready.

“I grew up in South California, and I’ve been fooling with hot rods my whole life,” he said. “I do all my own work, and it’s just good therapy. My son works on them with me, and I have grandsons that work with us, too.”

The Kitchens family revolves around hot rods, from the moment they are born to significant life events.

He said the cars are made to drive, but he still wants to preserve the history of the cars he and his friends grew up driving.

“It’s a tradition coming from the Great Depression,” he said. “It was economical to make, and it fills you up. If it wasn’t for red beans, I wouldn’t be here today.”

On the other side of the festival, Boyd Yarbrough, president of Friends of the Museum, checks on Bella, the cow participating in the cow patty bingo.

He said he started working with the museum because of his love of history and Tupelo’s past.

“I love to talk about how Tupelo grew from nothing to the community it is now,” he said. “I like to educate the public about our heritage and history. I like to get people out here to see what the museum has to offer for the community.”