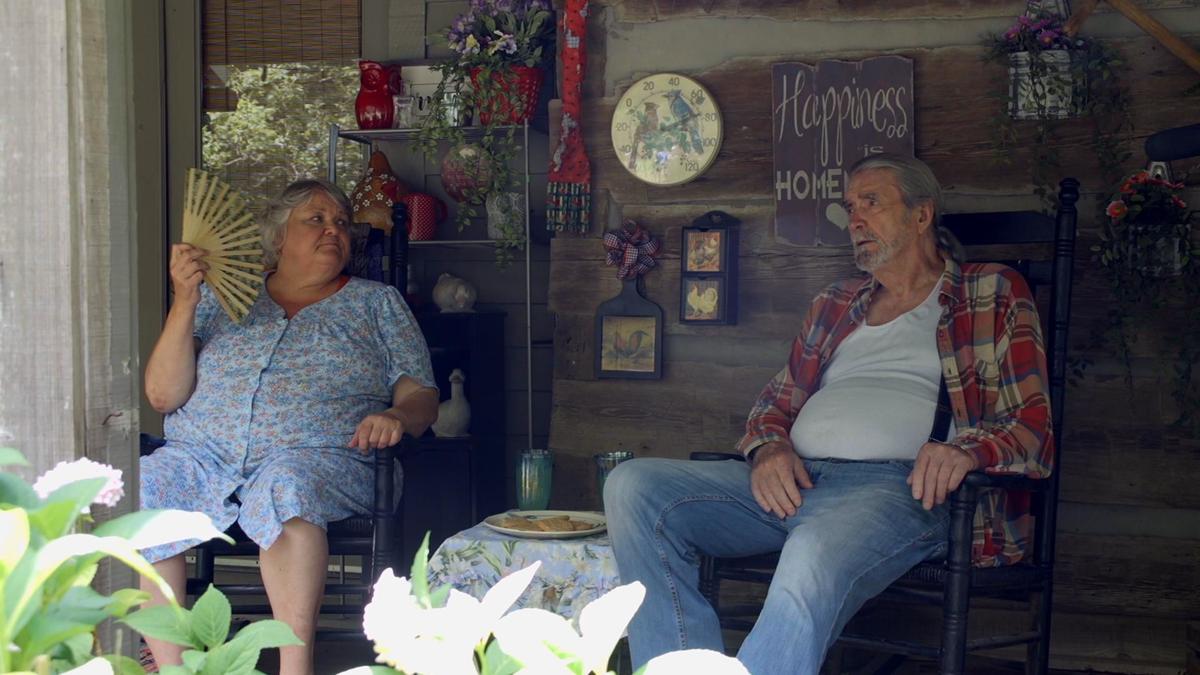 Susan and Johnny McPhail – as “Mabel” and “Norman” – sit on the front porch during the opening scene of the short film “The Golden Years.” The Oxford couple have appeared in numerous films and serve as ambassadors for the Oxford Film Festival. 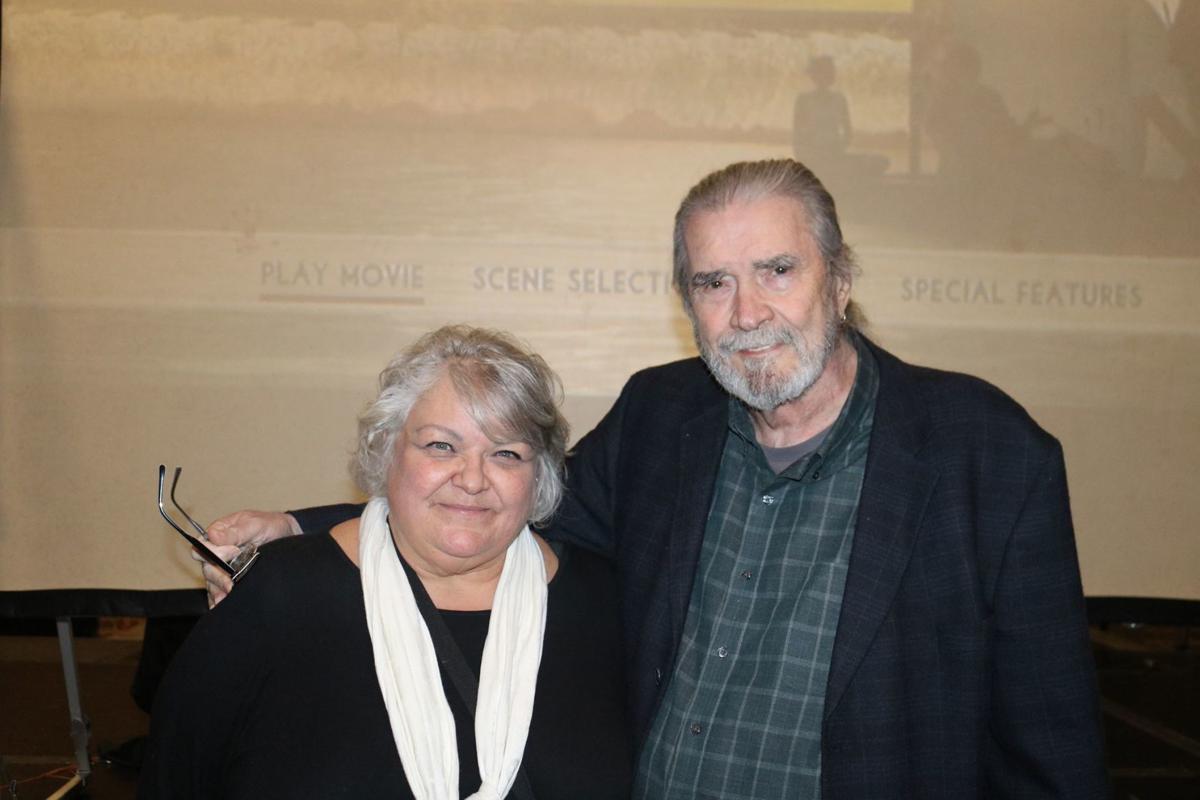 Actors Susan and Johnny McPhail have been real-life spouses for 38 years. “We met a bar in Memphis called The Desperado,” Susan recalled. “We started dating in June (1981) and got married in February.” 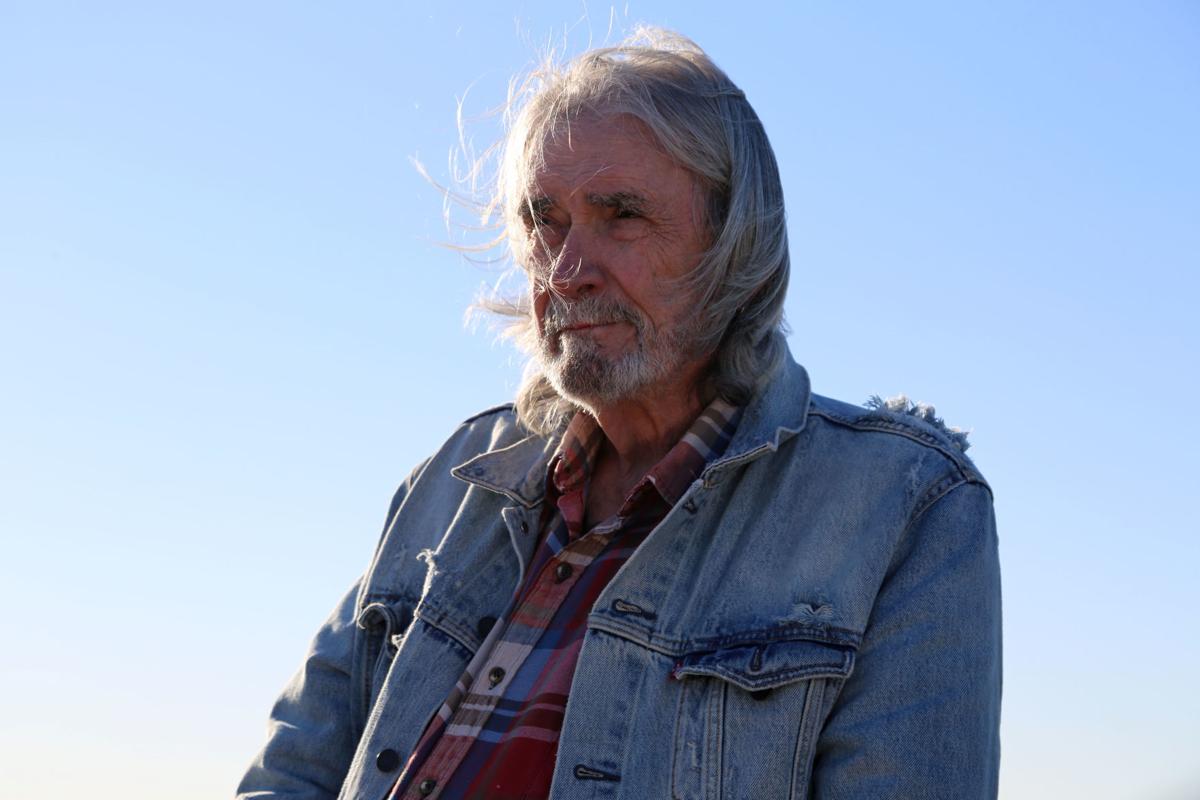 Johnny McPhail plays an elderly farmer in a scene from “The Highwayman.” Standing 6-foot-4, McPhail’s profile on the IMDb database website lists “towering height” as his trade mark. 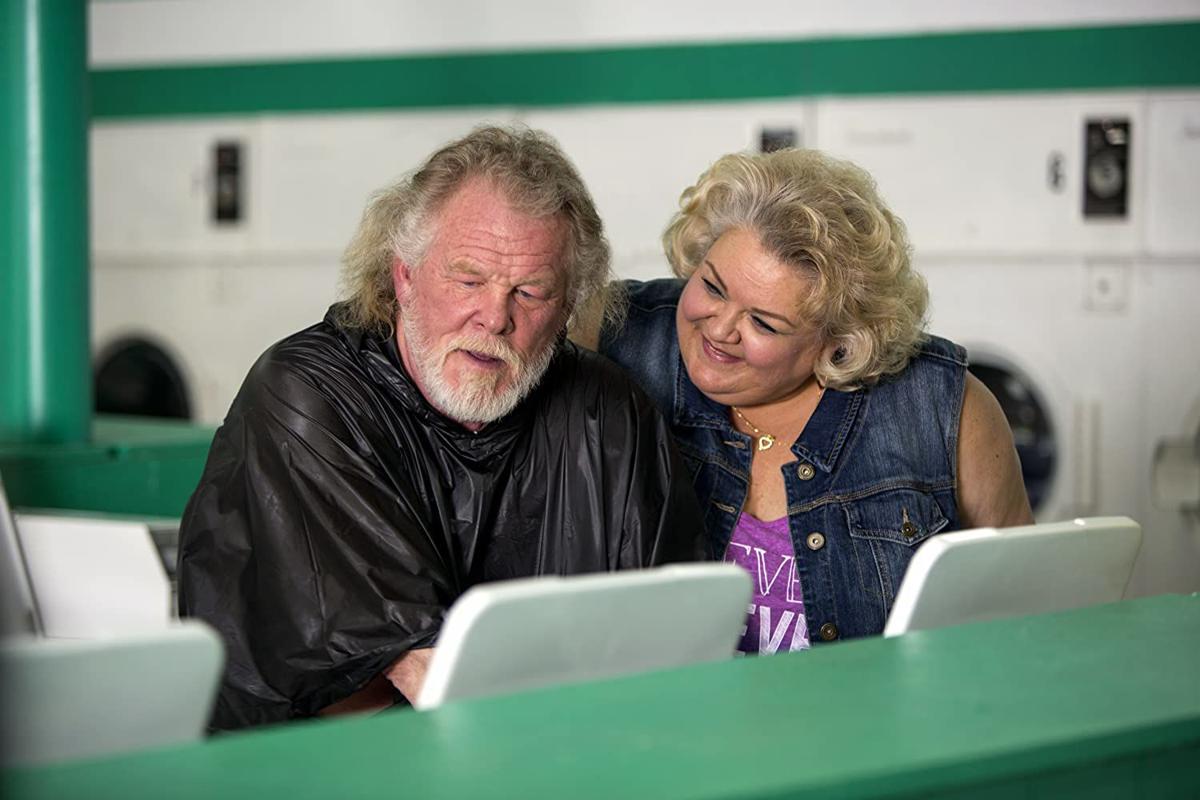 Susan McPhail shares a scene with Nick Nolte in a laundromat during the 2015 film “A Walk in the Woods.” 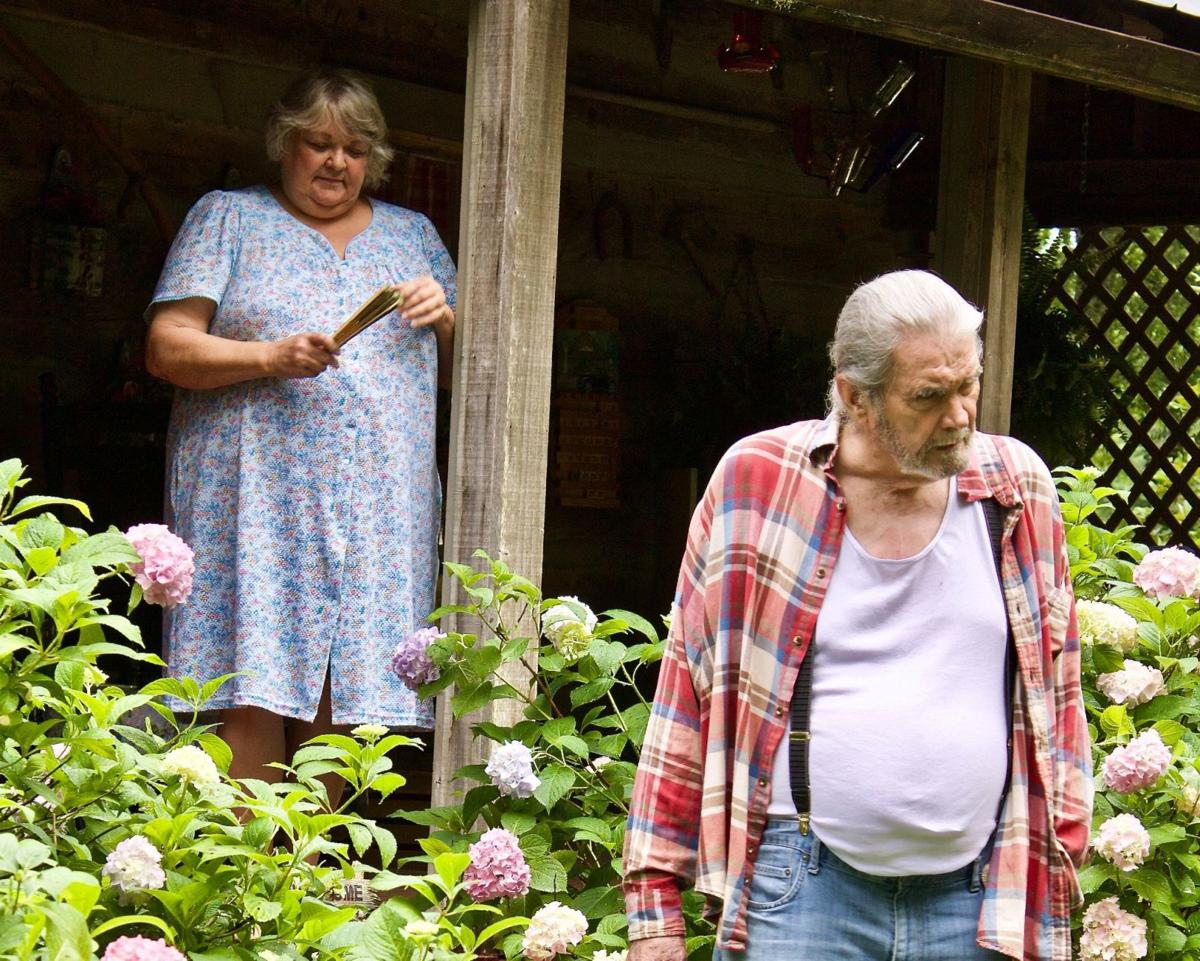 Mabel (Susan McPhail) watches Norman (Johnny McPhail) walk away from their home during a scene in “The Golden Years.” 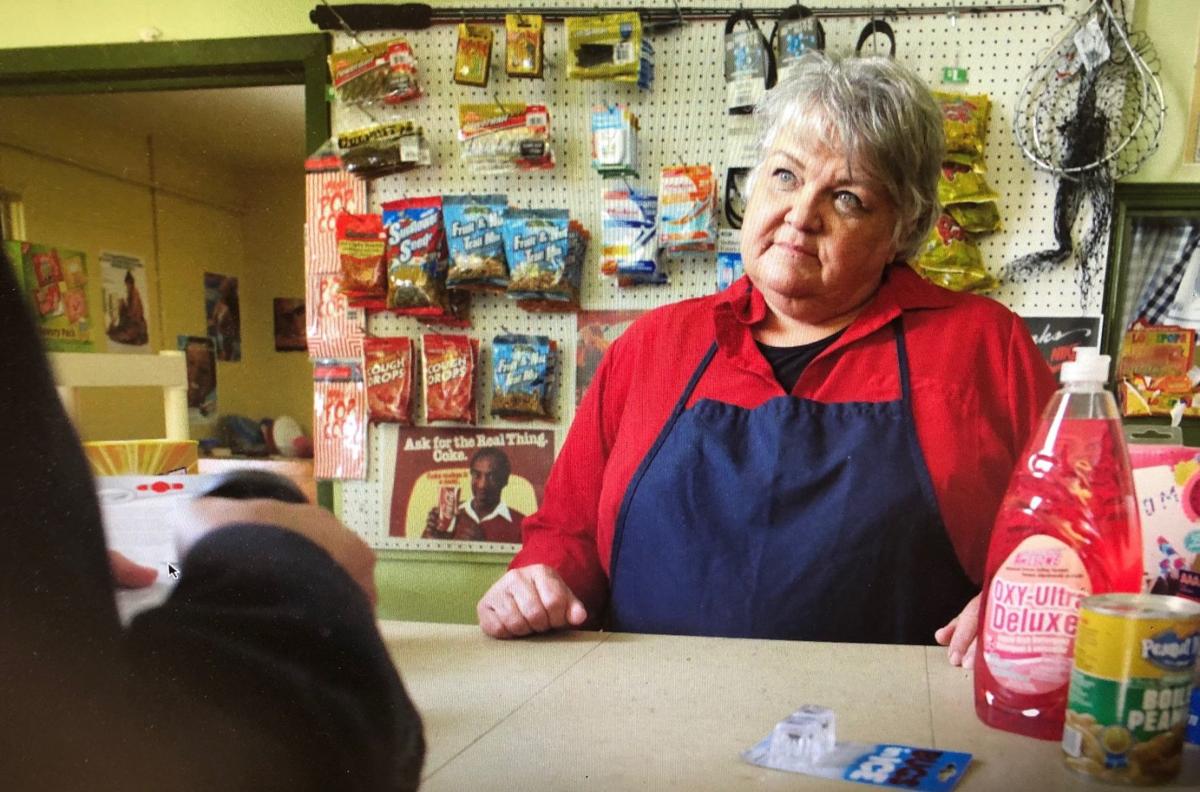 Susan McPhail’s character as a five-and-dime store owner has little patience for a salesman in “All That You Love Will Be Carried Away,” a short film that is part of the Oxford film fest’s McPhail Block.

Susan and Johnny McPhail – as “Mabel” and “Norman” – sit on the front porch during the opening scene of the short film “The Golden Years.” The Oxford couple have appeared in numerous films and serve as ambassadors for the Oxford Film Festival.

Actors Susan and Johnny McPhail have been real-life spouses for 38 years. “We met a bar in Memphis called The Desperado,” Susan recalled. “We started dating in June (1981) and got married in February.”

Johnny McPhail plays an elderly farmer in a scene from “The Highwayman.” Standing 6-foot-4, McPhail’s profile on the IMDb database website lists “towering height” as his trade mark.

Susan McPhail shares a scene with Nick Nolte in a laundromat during the 2015 film “A Walk in the Woods.”

Mabel (Susan McPhail) watches Norman (Johnny McPhail) walk away from their home during a scene in “The Golden Years.”

Susan McPhail’s character as a five-and-dime store owner has little patience for a salesman in “All That You Love Will Be Carried Away,” a short film that is part of the Oxford film fest’s McPhail Block.

OXFORD • On a warm Southern day, an elderly husband and wife are sitting on the front porch in rocking chairs when they begin reflecting on their years of marital bliss.

“It’s been a long time, Mabel,” says Norman, the husband.

The conversation stops long enough for Mabel to bite into a cookie and Norman to take a drink of lemonade. Mabel uses a hand fan to keep herself cool. The conversation then resumes.

“Always been able to talk to each other,” Norman says later, “especially about the weather.”

“Could tell each other about anything. No secrets,” Mabel says.

“The key to a good marriage,” he says.

Their chat stops again as Mabel eats her cookie and Norman sips his lemonade. Norman then decides it’s time to share with Mabel something he’s kept secret – or so he thought.

When real-life spouses Johnny and Susan McPhail read the above conversation and what followed it, they cracked up.

“I thought it was hilarious,” Susan said. “It’s kind of like the way we talk to each other anyway.”

The exchange takes place in the opening minute of a short film titled “The Golden Years” starring the McPhails. The Oxford couple, who have been married 38 years, are both actors with screen credits ranging from short presentations like “The Golden Years” to full-length major studio releases and TV appearances.

“I kind of reinvented myself when I turned 50,” said Johnny, 78. “I decided see what it was all about. I’d done a little bit of everything, so I got into the movies.”

The McPhails are also the ambassadors of the Oxford Film Festival. They have been involved with the event from the beginning, attending the initial planning meeting for the event and have served in various volunteer roles since its 2004 launch. This year, the McPhails are featured in the “McPhail Block” – a collection of four short films featuring the two in lead or supporting roles.

The Oxford film fest, which usually takes place over a week during the spring around the city and the University of Mississippi, was shut down this year because of the COVID-19 pandemic. Some of the films, including the “McPhail Block,” are being shown online as part of the revamped Oxford Virtual Film Festival through oxfordfilmfest.com.

“They’re always talking at the festival, and we love them,” said Melanie Addington, the festival’s executive director. “During the festival, they’re like our Walmart greeters. They make people feel welcome.”

The McPhails met in 1981 at a Memphis nightclub and married in February 1982. They were first exposed to film festivals when they and Oxford book publisher Neil White attended a festival in Starkville. Johnny and Susan were soon on their way to Colorado to attend one of the nation’s premier festivals for independent filmmakers, Sundance.

“I went to Sundance right off the bat,” said Johnny, a Calhoun County native who as a youth would go the “picture show” every Saturday night on the square in Bruce. “I met Quentin Tarantino there, and I kept meeting people and doing whatever I could.”

After attending their first festivals, Johnny and Susan learned the value of making connections with filmmakers at the events.

“We’ve met some really cool people going to film festivals,” said Susan, a Memphis native. “We’ve made life-long friends and we’ve gotten a lot of work from just going to the festivals.”

Beginning with his role as “Mop Guy” in the 2001 film “Big Bad Love,” Johnny has racked up almost 50 screen credits. Some of his supporting motion picture roles include “Old Farmer” in “The Highwaymen” (2019) that starred Kevin Costner and Woody Harrelson, “Old Man” in “Free State of Jones” (2016) starring Matthew McConaughey, and “Wes” in Holly Hunter’s 2016 film “Strange Weather.” He was “Robert Doumain” in two episodes of HBO’s “True Detective” in 2014.

Susan and Johnny first appeared together in the 2005 film “Glorious Mail,” and since then she has about 30 credits.

“Susan, she became a superstar overnight,” Johnny said, laughing. “It didn’t take her as long.”

Susan has been cast in roles such as “Beulah” in “A Walk in the Woods” (2016) starring Robert Redford, Nick Nolte and Emma Thompson, as “Diner Waitress” in “The Peanut Butter Falcon” (2019) with Dakota Johnson, Shia LeBeouf and Zack Gottsagen, and “Donna” in “Mississippi Grind” (2015) with Ben Mendelsohn and Ryan Reynolds.

Both Johnny and Susan said they have auditioned for movies without leaving Lafayette County.

“After all these years, we do most of our auditions from where we’re sitting, in our living room,” he said. “In fact, we get cast – especially Susan – quite a bit without meeting the director. That’s highly unusual. I got cast in ‘The Highwaymen’ and never met the director. I just auditioned here. We’ve got the cameras and lights and everything.”

Susan said she’s even auditioned for a role while on location in Hammond, Louisiana, for the movie “One of These Days,” which received rave reviews at the Berlin Film Festival. The movie she was auditioning for was “The Evening Hour,” which was scheduled to be one of the featured films this year at the Oxford festival.

“All we had was one of these mini-tripods. We do all of our auditions on our cell phones,” she said. “We stacked suitcases up on top of each other. We put the tripod on top of it and put the phone in the tripod. I sat on the edge of the bathtub with the shower curtain as my backdrop, and I auditioned. People get stressed over their auditions, how the lighting is and everything. Honey, I got a part sitting on the edge of a bathtub.”

While they’ve been able to find work in full-length films, the McPhails enjoy acting in short films like those in the Oxford festival’s “McPhail Block” with directors and actors they have come to know through festivals and other films.

The longest of the four, “All That You Love Will Be Carried Away,” is a 30-minute drama based on a Stephen King short story. Directed by Thad Lee, Johnny plays a traveler who rides along with a salesman (Rhes Low) whose love for bathroom graffiti could save his life in a Nebraska hotel. Susan has a brief part as the owner of the five-and-dime store.

“The Rougarou,” a 13-minute drama directed by Lorraine Caffery, casts Johnny and Susan as Pop and Nana – grandparents to Gerty (Victoria Dellamea), a girl whose father tells a cautionary tale to keep her out of trouble.

Then there’s “The Golden Years,” the 9-minute, 40-second comedy featuring only the McPhails. The film, directed by Corinth native Brian Whisenant, was chosen to be this year’s festival Community Film – a picture made using local people in all aspects of the filmmaking process. The film was shot in June 2019 at the home of White, who accompanied Johnny and Susan to their first film festival in Starkville.

The screenplay featuring the conversation between Mabel and Norman was written by Joe Starzyk, and it won the Best Short screenplay at the 2019 Oxford festival.

“He was a big part of making the film,” Johnny said of Starzyk. “He cranks out short stories like there’s no tomorrow. He wins a lot of film festivals and contests where he enters his scripts.”

Susan said she remembers joking after reading the script that she could play Mabel and Johnny could be Norman.

“Well, they decided to make it the Community Film and we were cast,” she said. “It was pretty much a given. That’s the closest to us doing a documentary because that’s pretty much us in real life.”

Even though Johnny thought the script was “corny,” he also said it was quite funny.

“I love to do comedy, and I told Susan, ‘Boy, this will be a stretch for us,’” he said. “Anyway, I love comedy and they made it work.”

Johnny and Susan both have films that are in post-production. Fans can follow the couple through their respective Facebook pages. They also look forward to seeing the Oxford Film Festival come back in person. Addington said the festival could be held in some form later this year, but if not then it’ll return in March 2021.

“I think Oxford, Mississippi, has one of the best,” said Johnny, speaking in his role as Oxford film fest ambassador along with Susan. “It’s like a little Sundance with a lot better parties. So, we’ve got to get everybody to come when we crank back up.”