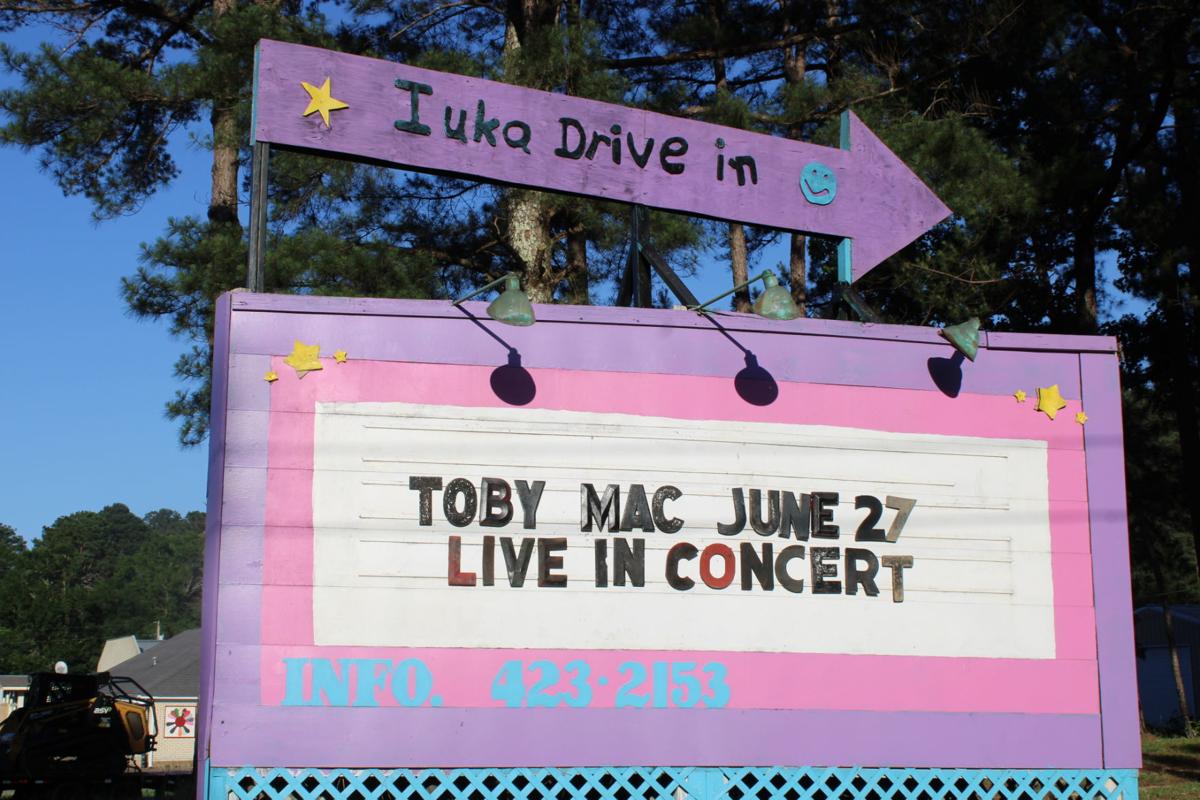 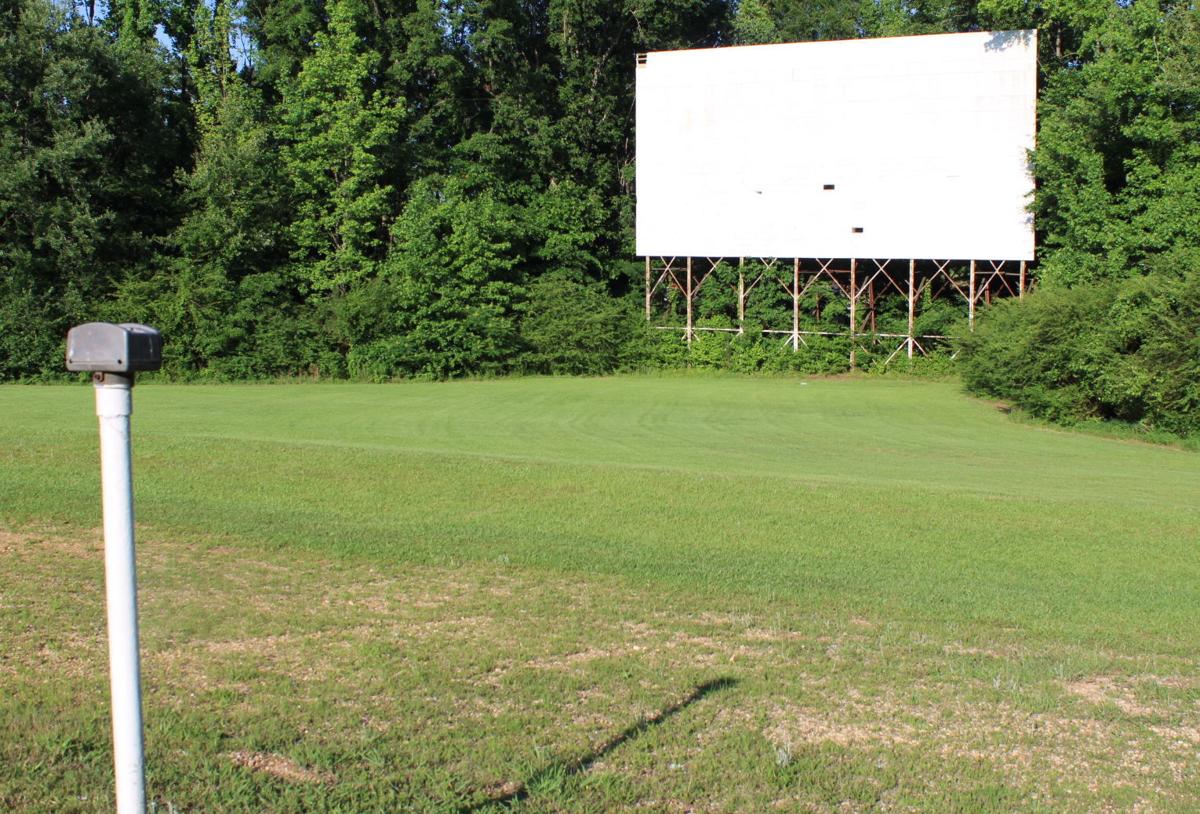 One of the old speaker posts at the Iuka Drive-In marks a prime spot to view the stage for the two concerts scheduled June 27 and July 25. The stage will be set up in the grassy area in front of the movie screen. 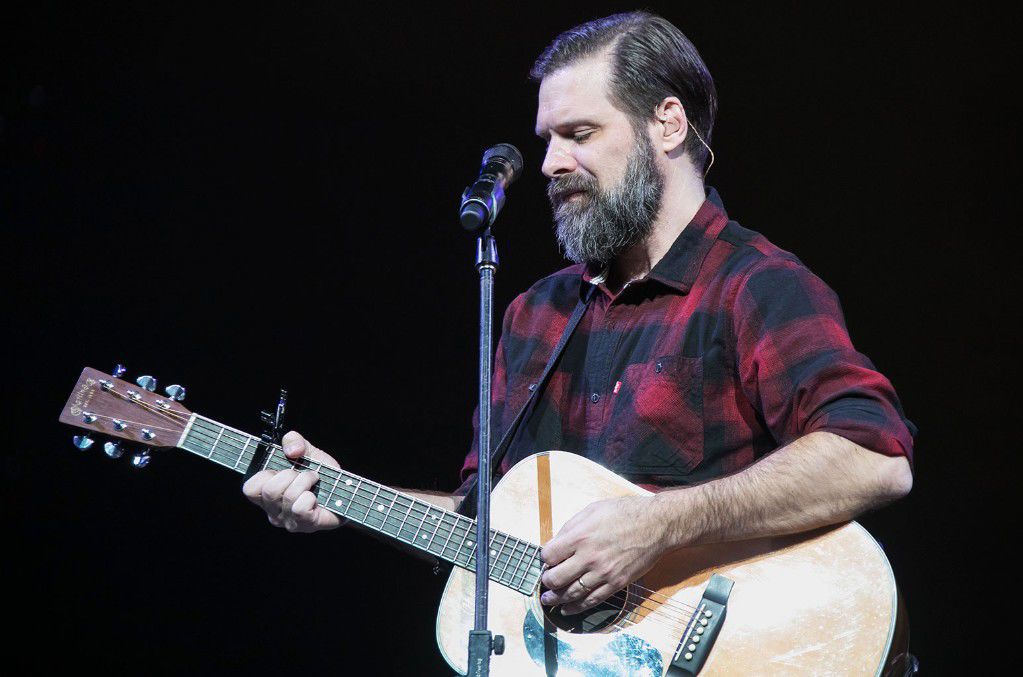 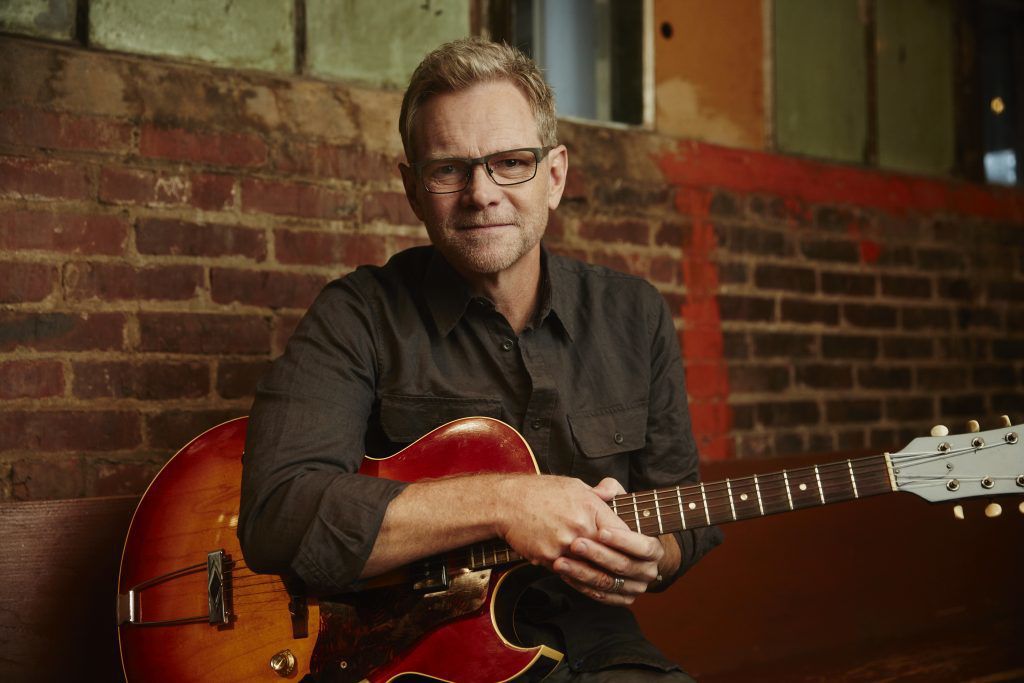 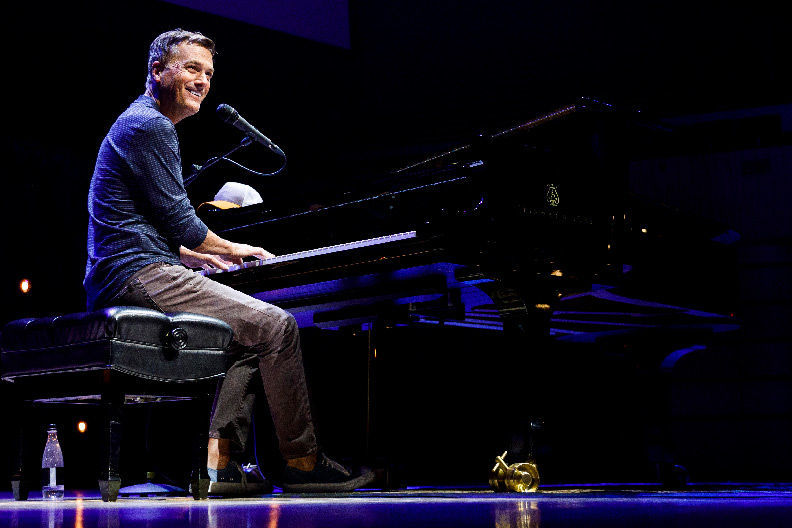 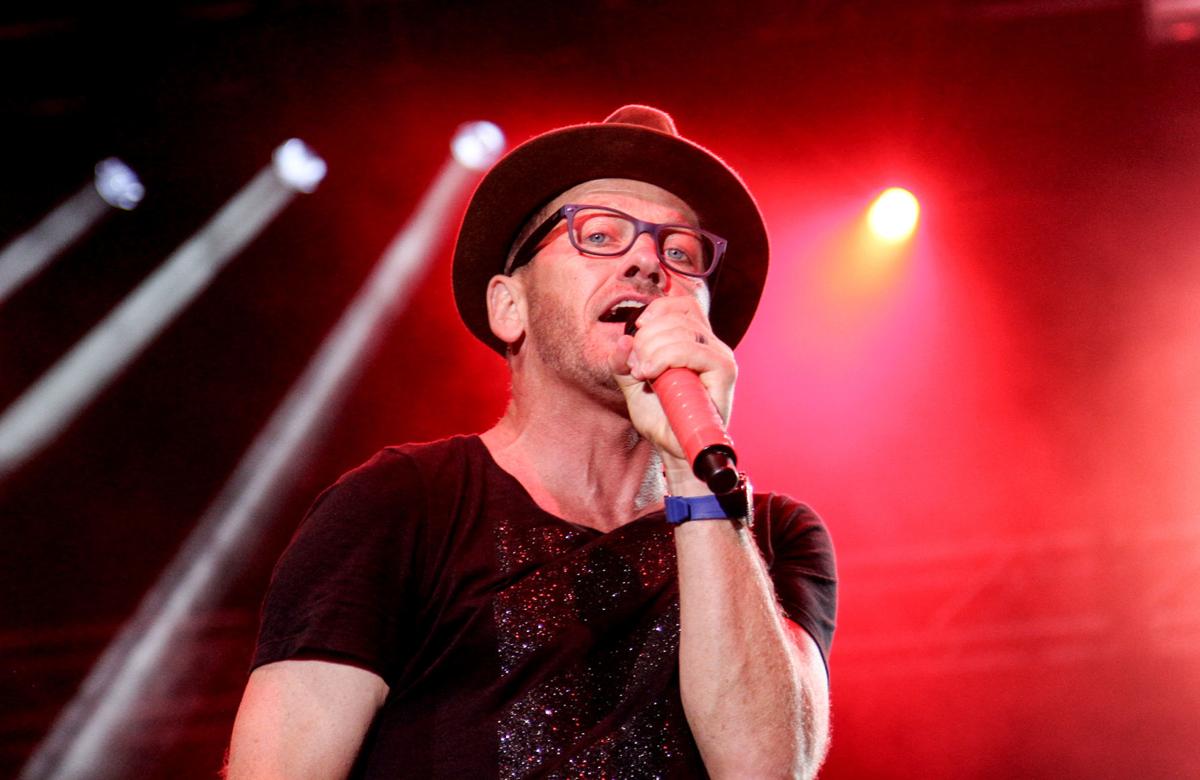 One of the old speaker posts at the Iuka Drive-In marks a prime spot to view the stage for the two concerts scheduled June 27 and July 25. The stage will be set up in the grassy area in front of the movie screen.

IUKA • Visitors to the Iuka Drive-In Theatre over the years have seen their share of stars projected on the movie screen.

The stars are soon returning to Iuka, but this time they’ll be on stage in front of the screen.

Just how much star power is coming to this city of about 3,000 residents?

Collectively, the four have sold 45 million albums either as solo artists or as members of groups. They’ve won 26 Grammy Awards and at least 150 Dove Awards.

With the pandemic bringing indoor entertainment to a halt, the artists are loading up and taking the music to the fans by playing at small-town drive-ins from Missouri to North Carolina. With Iuka on the list, residents in Tishomingo County are excited about the upcoming shows.

“It’s definitely huge,” said the Rev. Jason Roberts, administrative pastor of The Bridge at Burnsville, a church in Iuka’s neighboring town. “It’s going to be filled up. It’s one of those I-can’t-believe-this-is-happening things. It’s kind of surreal for them to be coming to a little bitty community like ours.”

TobyMac, the rock/hip hop artist who first achieved success with the group dc Talk and then as a solo performer and producer, will perform Saturday, June 27, in Iuka. Smith and Chapman, both established solo singers, will team up with Powell, former lead singer of the group Third Day, on Saturday, July 25, for a triple feature.

“I grew up listening to these guys,” said the Rev. Seth Kennedy, lead pastor of The Station Church in Iuka. “TobyMac is dc Talk for me. Then you have Steven Curtis Chapman and Michael W. Smith, who are like the anchor guys for the late ‘90s, and you add Mac Powell. It’s a blessing to have them.”

TobyMac and a third tour featuring the group Newboys United will play at the Blue Moon Drive-In in Guin, Alabama. Newboys United, fronted by TobyMac’s dc Talk bandmate Michael Tait, is set for Wedneday, June 24, with TobyMac to follow on Monday, July 6.

Both drive-ins are located about 60 miles from downtown Tupelo.

“We’re excited that we’ve developed a way for our fans to safely come together and enjoy live music again,” said Curtis Pinkerton, director of marketing for Awakening Events, in a news release. “In the climate of today we need more positivity in the world, and we take great pride in being able to offer some of that positivity safely.”

When Awakening Events contacted Iuka drive-in owners Earl and Melissa Jo Curtis about hosting the concerts, they jumped at the opportunity.

“We’re glad to do it,” Melissa Jo Curtis said. “They asked what we wanted for them to do this, and we said nothing – just come do it. We’re more than happy to do this for the community.”

Keith Urban last month hosted a private drive-in concert near Nashville for Vanderbilt University medical workers while Alan Jackson is playing two concerts this weekend in Cullman and Fairhope, Alabama. Garth Brooks announced Thursday he will perform a concert that will be broadcast June 27 – the same night TobyMac is in Iuka – to 300 drive-ins across the country, including the Blue Moon in Guin and the Malco Summer Drive-in in Memphis.

The Curtises, who live in Waverly, Tennessee, will also see both the TobyMac and Smith/Chapman/Powell tours play at another drive-in they own – the Pink Cadillac in Centerville, Tennessee.

Tickets, which are available through Eventbrite.com, are being sold on a per car basis (limit of six people per car). For Iuka, the tickets are $175 for preferred parking closest to the stage and screen or $100 for general admission. A $100 ticket split six ways would cost $16.67 per person.

“I like that,” said Curtis, adding that the Centerville tickets are sold out and the Iuka tickets are going fast. “When I first saw it, I thought it was per person and I was thinking that’s high. But by the carload, I think it’s pretty reasonable.”

The Guin tickets are the same, but it also offers a $60 ticket for parking facing Screen 2 at the opposite end from where the stage will be set up. The concert will be projected onto Screen 2.

Gates open at 6:30 p.m. for both Iuka and Guin, and the shows start at dusk. They are “rain-or-shine” events, meaning they will go on even if it rains. Ticketholders are encouraged to bring lawn chairs and blankets, purchase concessions from the drive-in stand and observe local guidelines involving safe distancing.

“With their production, they’re probably not making a lot of profit,” Curtis said of the performers and tour company. “But they’re doing this for the fans. They feel like the country needs this at this time, and it’s a good thing they’re wanting to do it.”

In a statement announcing his tour, TobyMac said he enjoys the family atmosphere at the drive-in.

“A few Saturday nights every summer my family and I head to a local drive-in movie theatre,” he said. “We always love it. When we started discussing live shows in this quarantine season and the idea of playing drive-ins came up, I said, ‘Let’s go.’ It feels like summer, safe for everybody, and we all get to enjoy live music again.”

Iuka’s drive-in, which opened in 1957, is the only remaining operating drive-in theater in Mississippi. However, it has shown no movies since last year due to its annual winter break and the coronavirus outbreak this spring. Curtis said motion picture distributors would not send any movies to Iuka until the state OK’d outdoor entertainment venues to reopen.

The drive-in, in the meantime, has been used by The Station Church and other churches for outdoor services. Kennedy is appreciative of the drive-in for allowing churches and the tours to gather there. Curtis said there’s a possibility of a third concert for Iuka that would take place in August.

Anyone who attends the Iuka concerts, Kennedy said, will see and hear more than just headlining stars and their music. There will be a message.

“Each of them have had different struggles in life,” he said. “That’s what, I think, separates the Christian music industry. It’s not just guys put on a pedestal. It’s guys who have walked through the challenges of life, but they’ve handled it on a platform for the world to see that is exemplary for everyone else to follow. They stayed true to their faith. That’s a testimony.”

Tickets: All tickets sold on Eventbrite.com on per car basis (limit of 6 people per car) and will be parked in order of arrival in the tier purchased. Tickets are $175 (preferred parking spot close to the stage and screen), $100 general admission.

Tickets: All tickets sold on Eventbrite.com per car basis (limit of 6 people per car) and will be parked in front of Screen 1 in order of arrival in the tier purchased. Tickets are $175 (preferred parking spot close to the stage and Screen 1), $100 general admission; $60 show projected on Screen 2.