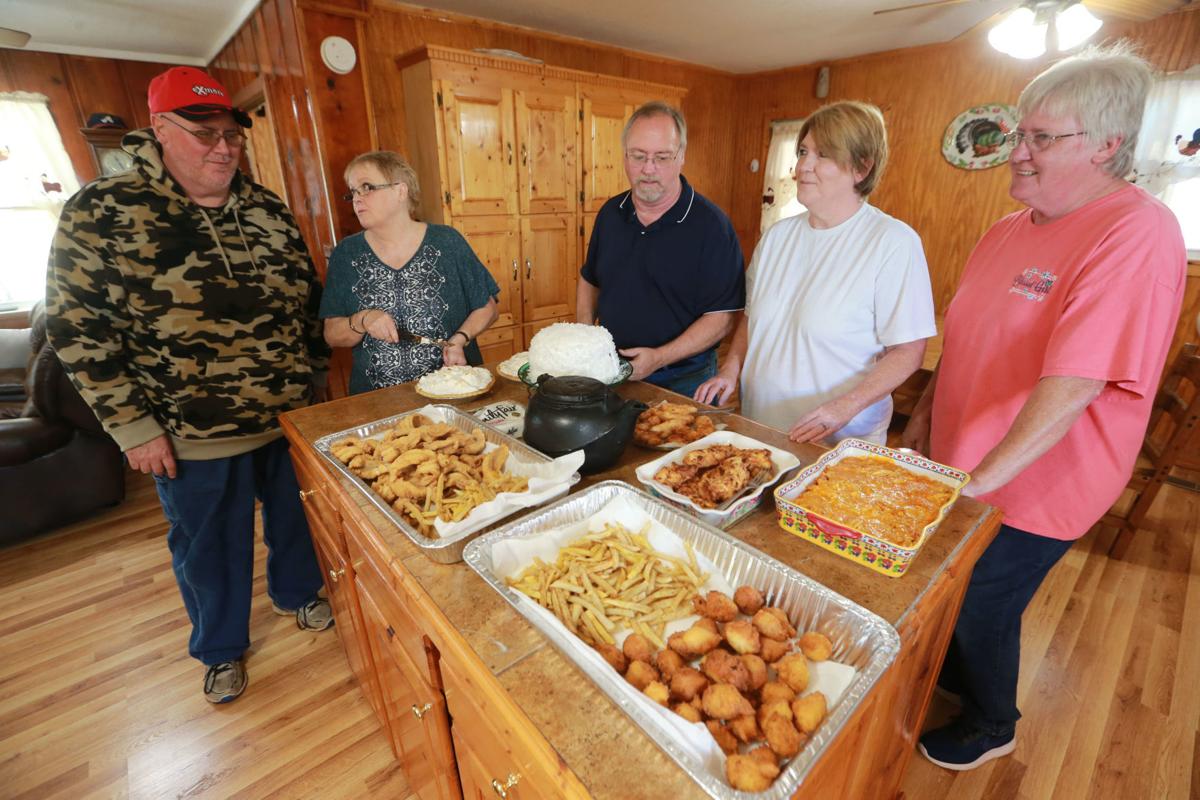 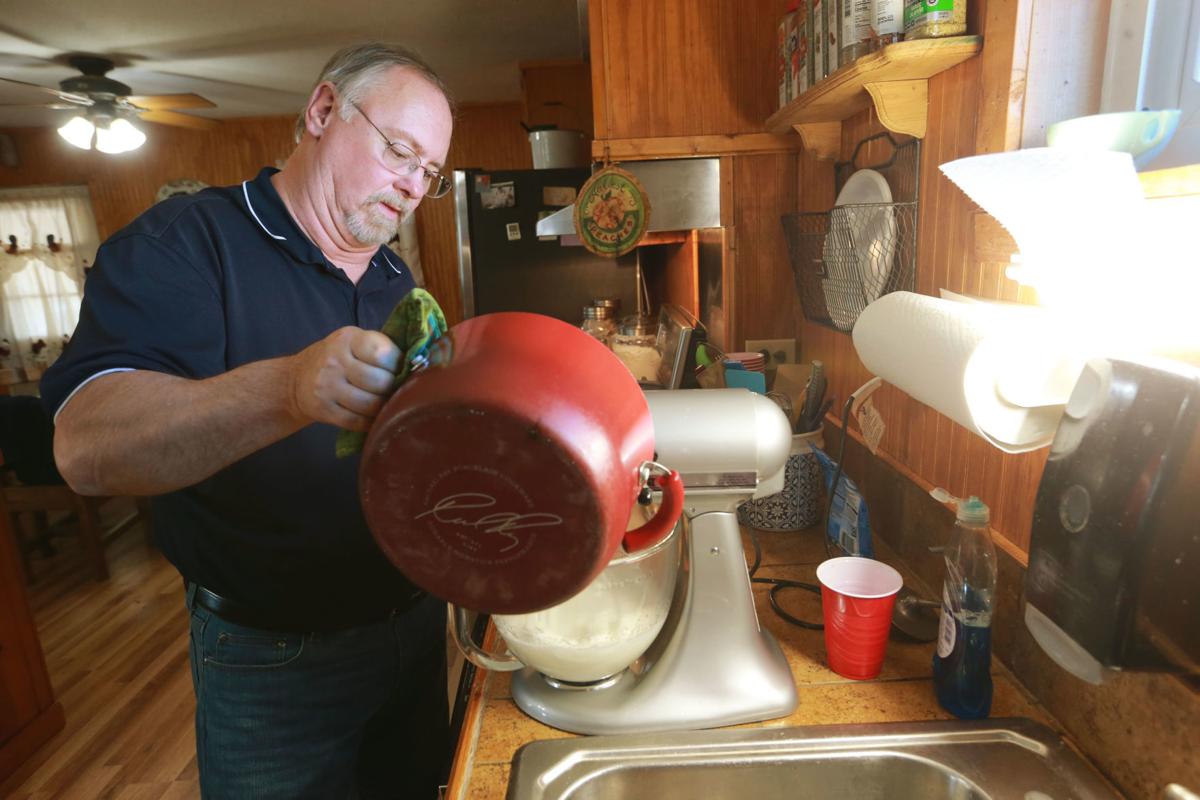 Jamie Dill makes a no-fail icing for his coconut cake. 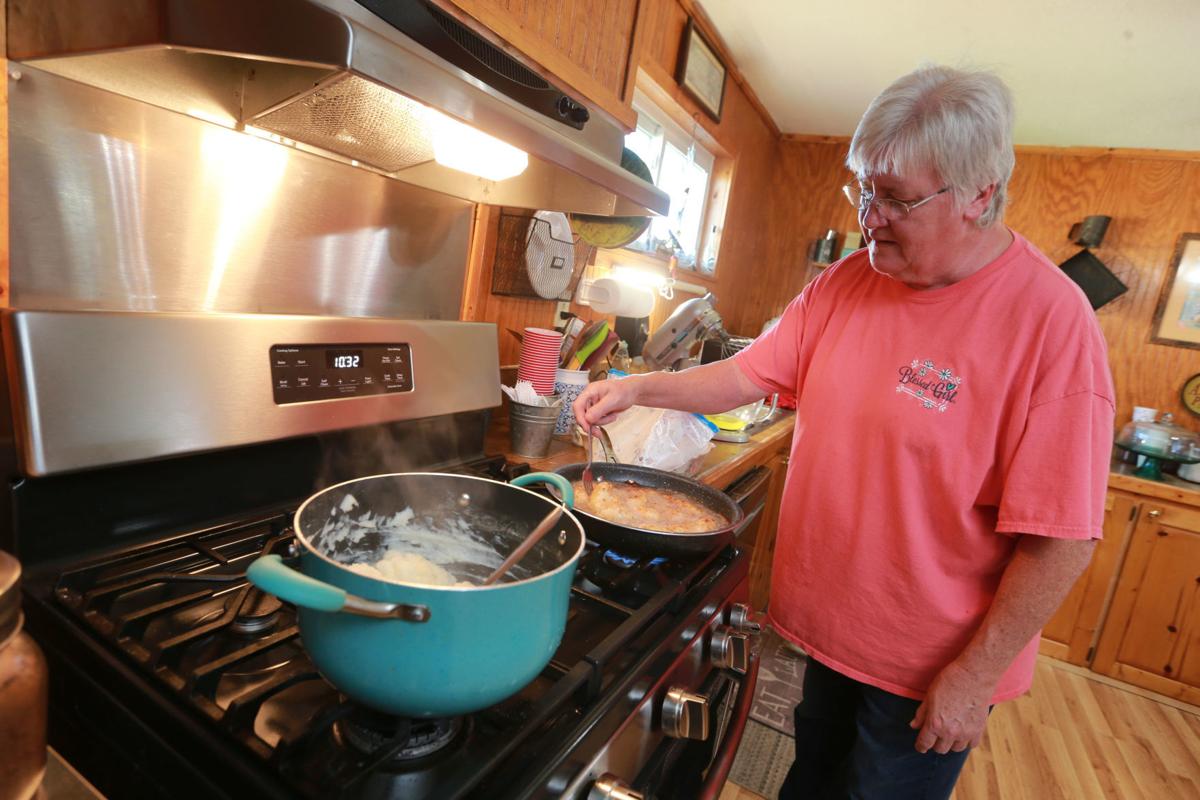 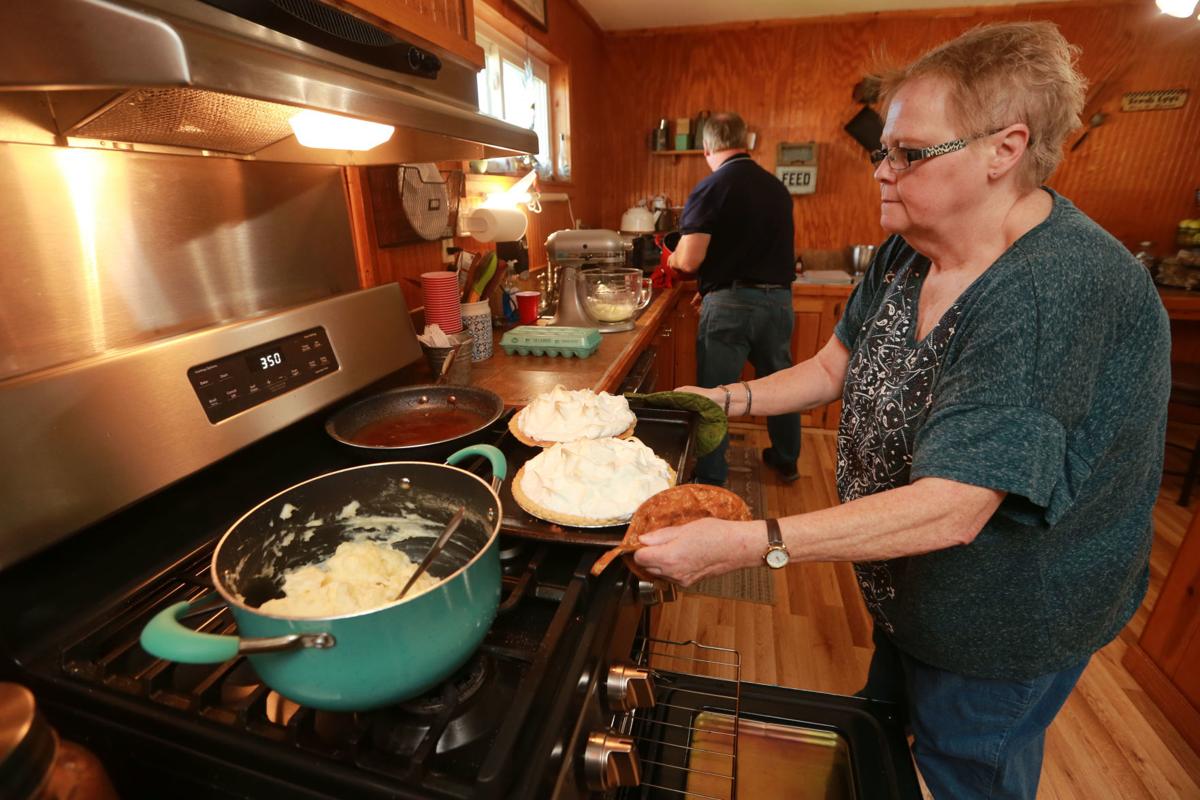 Debbie Howell gets ready to put her chocolate pies in the oven to brown the meringue. 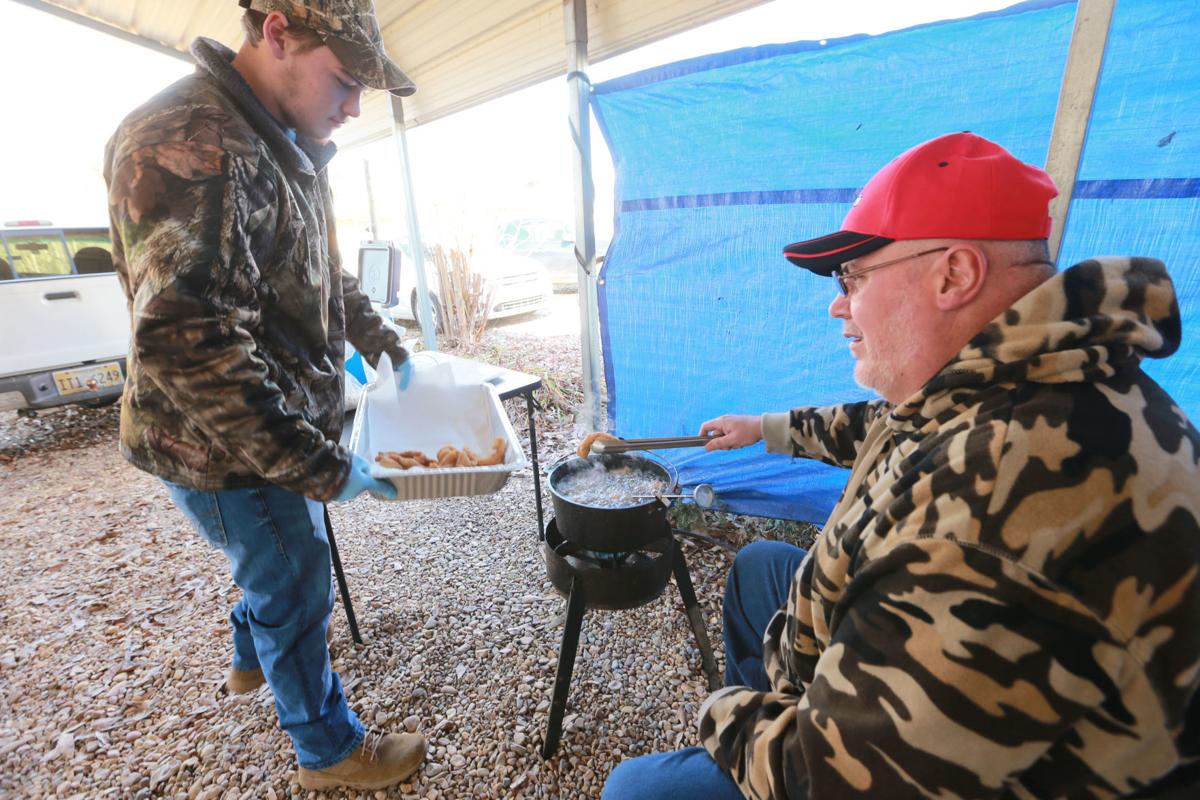 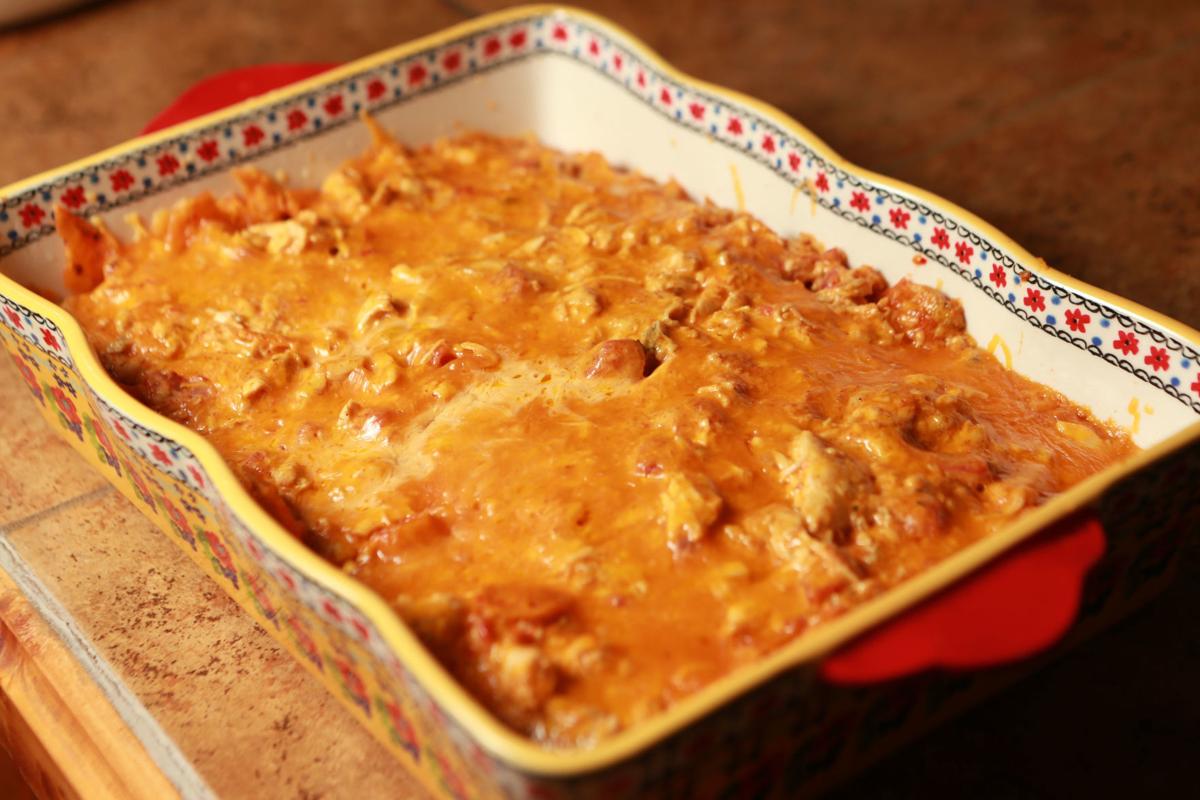 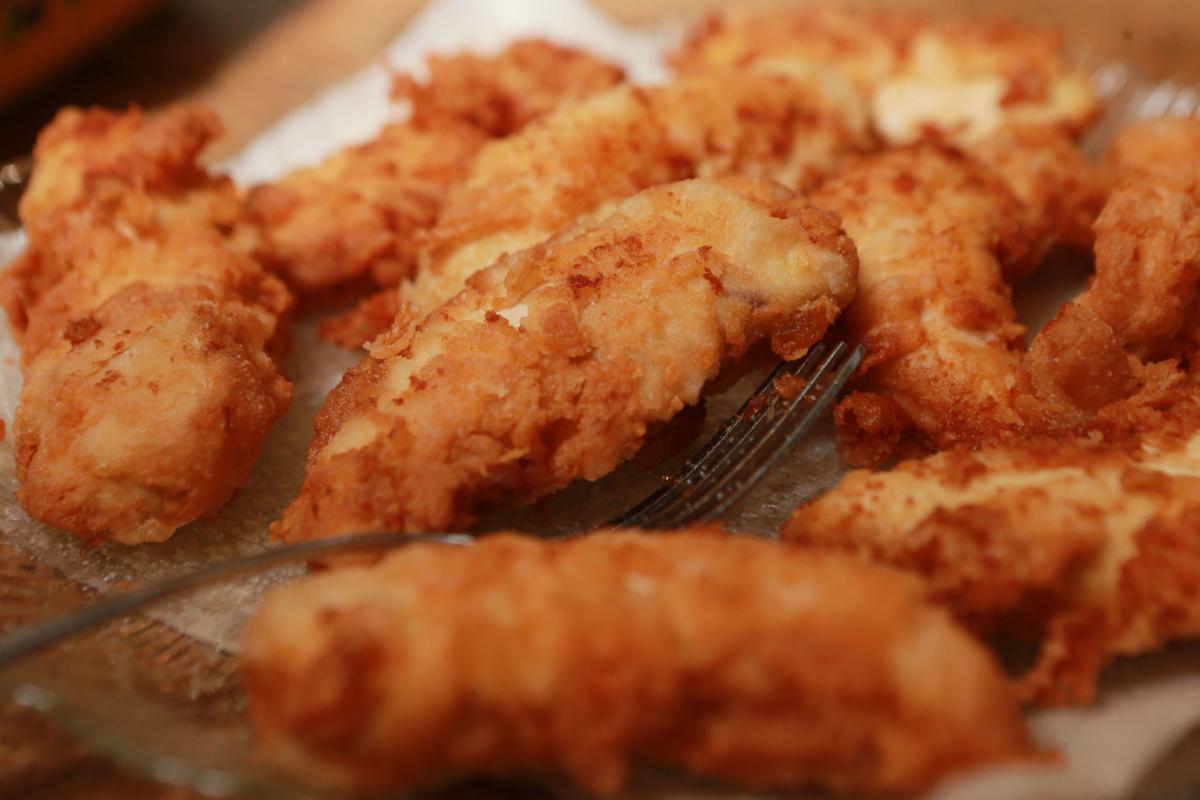 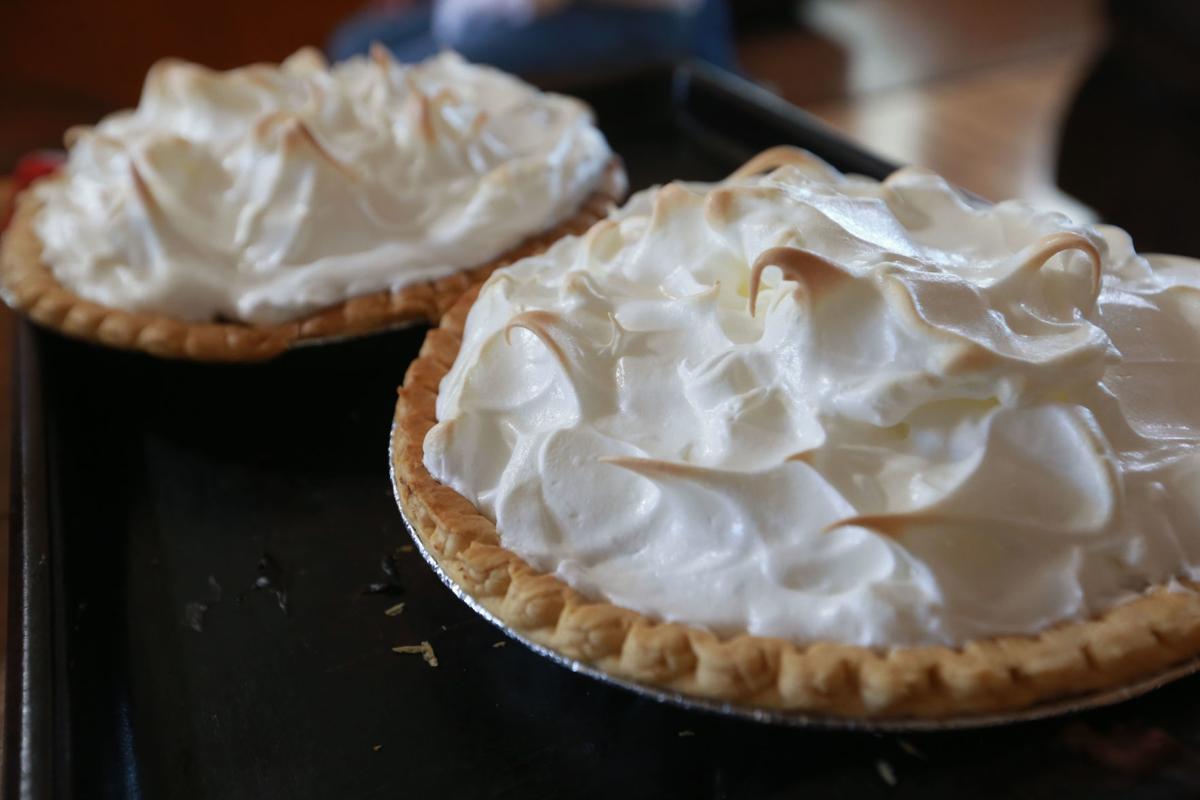 Jamie Dill makes a no-fail icing for his coconut cake.

Debbie Howell gets ready to put her chocolate pies in the oven to brown the meringue.

MANTACHIE • When the Dill family gets together to cook, the kitchen looks like an all-you-can-eat buffet.

An island in the center of the room is heaped with platters of fried chicken, steam pans filled with catfish, fries and hushpuppies, bowls of slaw, casseroles, pies and a three-layer cake.

“When the table gets full, you go find you someplace else to eat,” said Wanda Waters, one of six children born to the late James and Lavee Franks Dill.

“If nothing else, you can sit in the floor,” said Debbie Howell, the oldest.

One day last week, five Dill children gathered to share a meal. Wanda and Debbie and their brother, Tim, joined siblings Jamie and Donna at the family’s homeplace in Mantachie, where Jamie and Donna live.

The Dills’ sister, Sandra, who was born between Debbie and Donna, died in 2008. She was the family troublemaker.

Jamie recalled that one day after church, Sandra invited a bunch of kids home to eat.

“Mama didn’t know and she didn’t have anything made,” said Jamie, retired principal at Mantachie Elementary. “It was summertime so Mama sliced some tomatoes and made sandwiches. Not a one of those kids complained.”

The Dill kids, who all live in Itawamba County, grew up in simpler times. Their father worked at Pennsylvania Tire Co. and their mother was a homemaker. Their best memories involve all things related to food – farming, gardening, canning.

“To us, the best cook in the world was our mama,” Debbie said. “There were six of us kids – Daddy was the only one working. She made things to fill your body up – tomatoes and macaroni, potato casserole with toast.”

“We were poor and didn’t know it,” Jamie said. “But we never wanted for anything.”

When it comes to sharing meals, each sibling has a specialty. Tim’s in charge of fish and steaks. Debbie does sweets, desserts and baked beans. Wanda makes the fried turkey and the casseroles. Donna does the dressing, fried chicken and vegetables. And Jamie does everything except the grilling.

“I can’t cook a good steak,” Jamie said. “When I want a good steak, I buy the meat and take it to Tim to grill.”

The Dills’ maternal grandparents, the Franks, lived at Hatley and their grandfather always had his pole in the water.

“We always had fish on Sunday at their house,” Tim said. “Mama cooked fish in a skillet on the back of the stove, but Granddaddy cooked it outside on a cooker. That’s how I do it.”

Even though the kids helped with the farm chores – they all hoed cotton and picked vegetables – they still found time for extracurricular activities. All of them played basketball except for Debbie.

“I played basketball at Mantachie,” said Donna, who was 5 foot 11 in her heyday. “Then Dot Easterwood came and gave me a two-year scholarship to ICC. They called me Legs.”

The Dill siblings get together as often as they can to share a meal. Jamie retired in May and Tim, the youngest, still works at Tiffin Motorhomes in Red Bay, Alabama. Debbie, Donna and Wanda are all retired from factory work.

“We get together for holidays and anytime we feel like seeing everybody,” Debbie said. “When we get together, we have fun. Sometimes people don’t like us to have fun if we get a prank on them.”

“We used to have big fish fries,” Wanda said. “We cooked for everybody – friends, the community, people from work. It cost us a pretty penny, but it was so much fun.”

If there’s one thing the Dills learned from their mother, it was hospitality.

“Mama’s philosophy was if you’re hungry, I’m not going to turn you away,” Jamie said.

“That’s the one thing about family,” Debbie said. “If one is hungry, the other will give you food or share something. We don’t let each other go without.”

Bake pie crust at 350 degrees until done. Set aside to cool.

Combine flour, cocoa and sugar. Add egg yolks to dry ingredients along with milk. Cook until mixture is thick. Remove from heat and add butter and vanilla. Pour into cool pie crust.

In a mixing bowl, beat egg whites until soft foamy peaks form, adding the cream of tartar. Spoon meringue over the top of pie, spreading to edges to seal. Bake at 350 degrees for 7 to 10 minutes or until lightly browned.

*Note: You can substitute 1 cup strong brewed coffee for the milk.

For the coconut, combine shredded coconut, water and coconut flavoring in a covered bowl. Refrigerate overnight.

For the cake, blend cake mix, water, oil, egg whites and coconut flavoring in a large bowl at low speed until moistened, about 30 seconds. Beat at medium speed for 2 minutes. Divide batter among 3 greased and floured cake pans.

Bake layers in center of oven at 350 degrees for 22 to 25 minutes or until done. Cake is done when toothpick inserted in center comes out clean. Cool layers in pan on wire rack for 15 minutes. Remove cake from pans and cool completely before frosting.

For the frosting, beat egg whites with salt until soft peaks form when beaters are raised. Mix corn syrup, sugar and butter in a saucepan. Cook over low heat, stirring constantly until sugar is completely dissolved and mixture just reaches a full rolling boil. Beat mixture into egg whites a little at a time. Add coconut flavoring and continue beating until mixture holds stiff peaks.

Place tenders in a covered bowl with milk or hot sauce. Refrigerate overnight until ready to cook.

When ready to cook, place oil in a skillet and heat over high heat. While oil is getting hot, place flour in a ziptop bag and add tenders, shaking to coat. Cook tenders in hot oil in batches for 4 minutes, turning them constantly until golden brown. Remove from skillet when done and salt immediately.

Layer 2 cups of Doritos in the bottom of a greased 9x13-inch casserole. Spread half of the chicken mixture over all. Place the remaining Doritos on top and spread with remaining chicken mixture. Sprinkle remaining 1 cup cheese over all. Cover with foil and bake at 350 degrees for 45 minutes.

20 catfish fillets, cut in half

Heat vegetable oil to 290 to 295 degrees in a large cooking vessel. In a gallon ziptop bag, combine corn meal, flour, salt and pepper. Shake well to combine. Place 5 catfish fillets in the bag and shake to coat. Drop fish into the oil and cook until the fillets float, then cook 5 minutes longer. Remove fish from oil and place on paper towels to drain. Repeat with remaining catfish fillets.

In a large bowl, combine cornmeal, flour and salt. Whisk together the egg, milk and onion; add to dry ingredients just until combined. In a cast iron Dutch oven or electric skillet, heat oil to 365 degrees. Drop batter by tablespoonful into oil. Fry until golden brown, 2 to 2 1/2 minutes. Drain on paper towels. Serve warm.