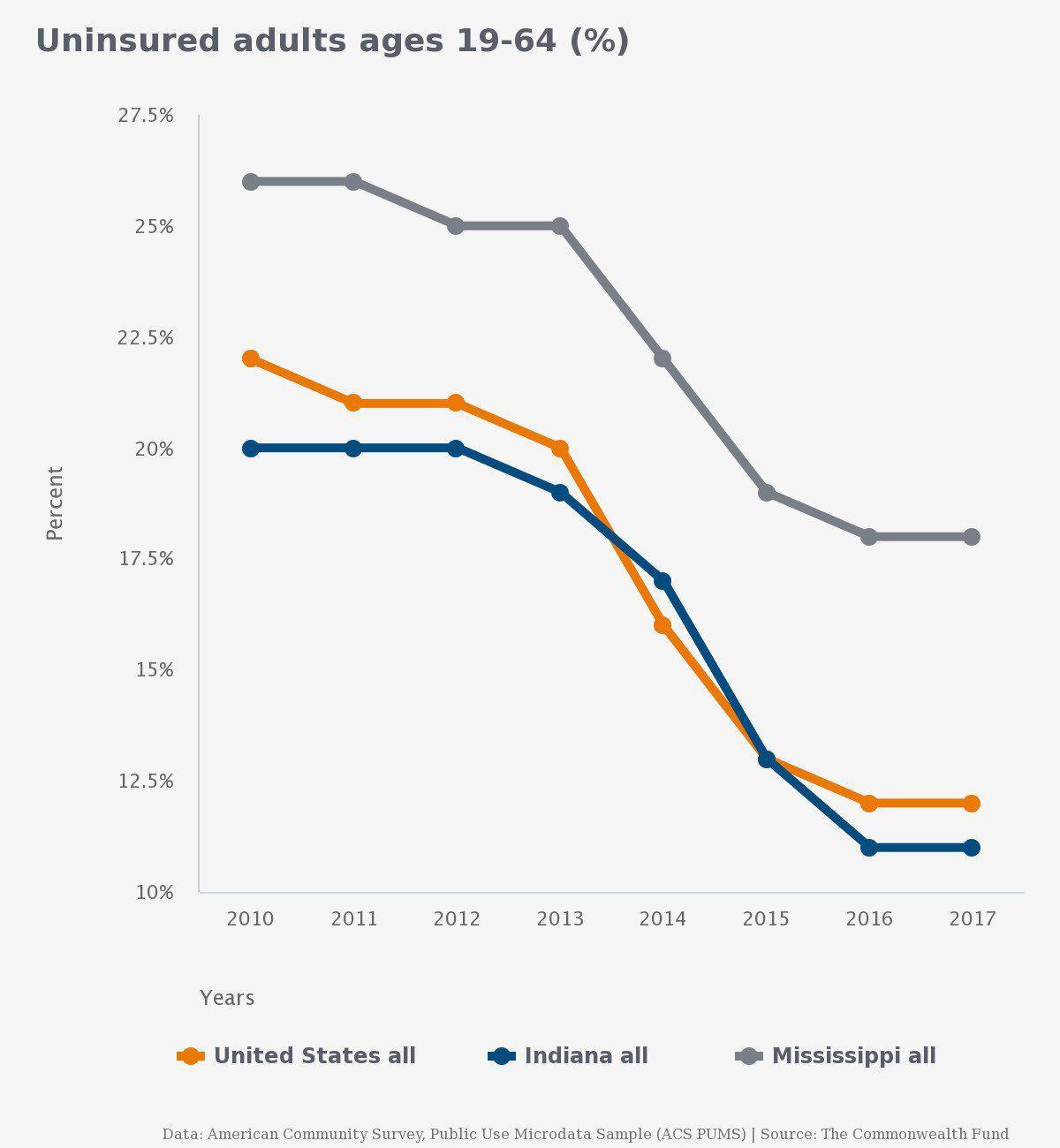 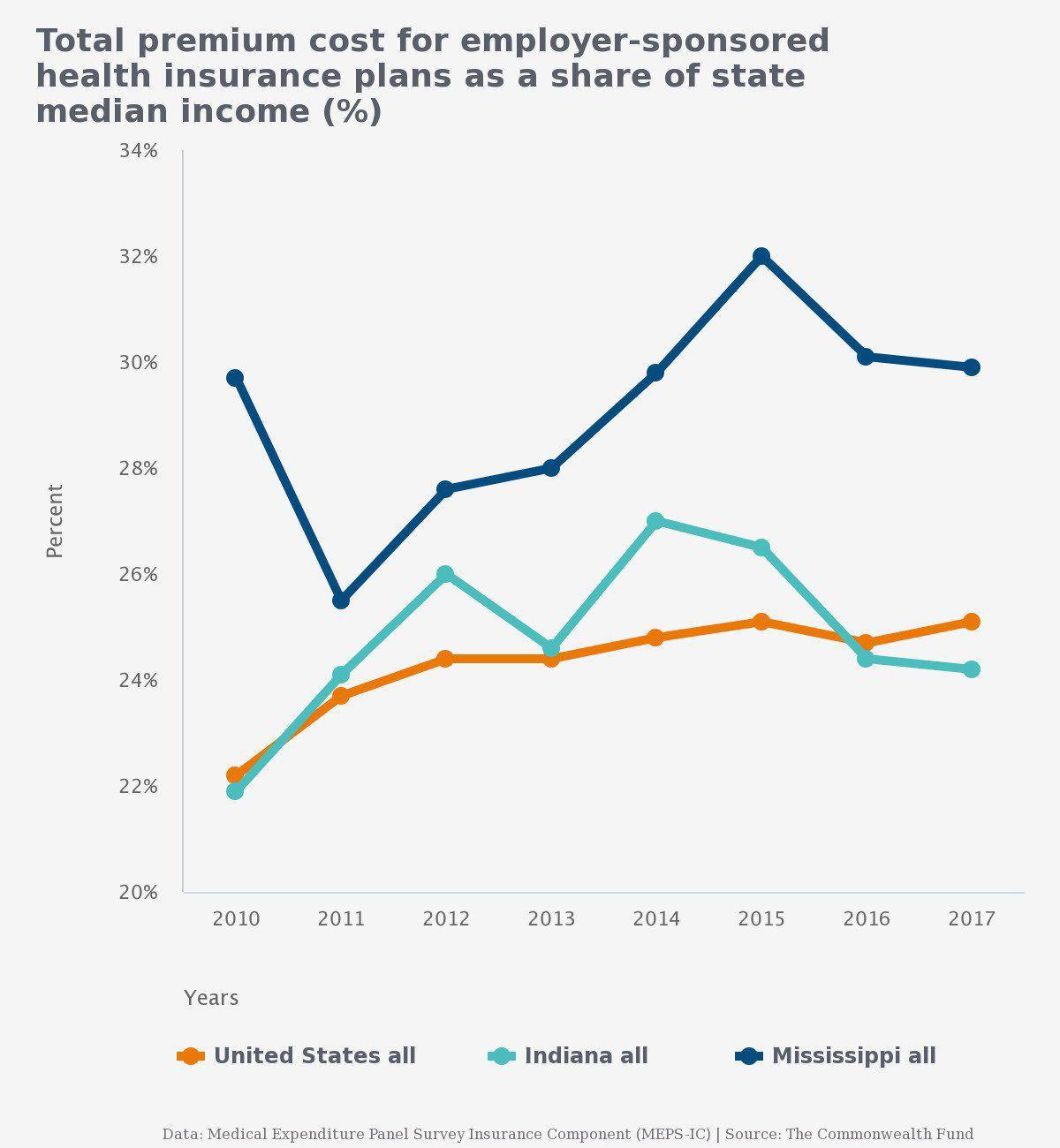 Indiana has seen a reduction in the cost of employer-based insurance as a share of household income since expanding health care coverage using private insurance instead of its Medicaid program.

Indiana has seen a reduction in the cost of employer-based insurance as a share of household income since expanding health care coverage using private insurance instead of its Medicaid program.

Mississippi Cares has been at the center of debate ahead of the Republican primary runoff for governor.

Using the blueprint created by Indiana’s expansion of health care coverage, the Mississippi Hospital Association has put together a proposal to cover the working poor without adding to the Medicaid rolls. It envisions a provider tax and premiums to cover the state’s contribution to draw down federal funds for expansion.

“Why would you not say yes to helping the working poor of Mississippi when it’s not costing the state money,” said Tim Moore, Mississippi Hospital Association chief executive officer. “Our (federal tax) money is already going to other states.”

In the final debate before the runoff, Lt. Gov. Tate Reeves said he remains opposed to any Obamacare expansion.

“I do not believe putting 300,000 more Mississippians on government health care is a good solution,” Reeves said during Wednesday’s debate.

“We have to do it,” Waller said. “We have 31 hospitals in danger of closing.”

Indiana has seen its uninsured rate drop to 11 percent, which is below the national average of 12 percent. In Mississippi, 18 percent of residents are uninsured.

The Mississippi Hospital Association developed the Mississippi Cares plan at the request of Gov. Phil Bryant based on Indiana’s model. It envisions a public-private partnership. Instead of moving more people into the Medicaid program, Mississippi True, the provider-sponsored health plan created by the hospital association and hospitals around the state, would serve as the health care insurer for the program.

Under the Affordable Care Act, the federal government pays for 90 percent of the costs for the expansion Medicaid population with the states responsible for the remaining 10 percent.

Under the Mississippi Cares proposal, participants would pay $20 a month in premiums and hospitals would pay a provider tax to cover Mississippi’s 10 percent match.

“Hospitals are willing to step up and invest,” Moore said. “That’s what makes this work.”

Mississippi Cares would be open to adults 19-64 earning up to 138 percent of the federal poverty level, which puts them below the income needed to assess subsidies and tax credits on the federal exchange. Children in these families typically qualify for CHIP or Medicaid and would remain under those programs, Moore said. Between 163,000 and 300,000 Mississippians could potentially take advantage of the program.

“It will be a significant contribution to rural hospital sustainability,” Spees said.

In addition to the monthly premiums, the Mississippi Cares proposal also includes a $100 copay for non-emergency use of the emergency department if there was a community health center, rural health or urgent care within 20 miles of the hospital.

The proposal does include work requirements for those not enrolled in job-training or educational programs with some exceptions.

The coverage would mirror Medicaid plan benefits for adults, with the exception of non-emergency transportation services. They would have unlimited physician visits and six prescriptions per month. Dental and vision would be included.

The program has been reviewed by actuaries, health insurance experts and economists, Moore said. Their analysis projects a $1.6 billion increase in Mississippi’s economy and 19,000 jobs.

For Mississippi Cares to become a reality, it would require approval from the Legislature and a 1115 waiver from the Centers for Medicare and Medicaid.

During the debate, Reeves expressed concern that a Mississippi Cares waiver would not receive federal approval, citing the recent rejection of Utah’s waiver request. However, Utah was seeking the more generous 90 percent match for its partial Medicaid expansion. Indiana’s waiver was renewed in 2018.

As Moore has presented the Mississippi Cares plan at civic groups across the state, the proposal has been well received.

“The No. 1 questions has been ‘Why have we not already done this?” Moore said.

Vice President Pence, when he was Governor of Indiana, enacted a conservative brand of Medicaid reform for his state. The Mississippi Hospital…