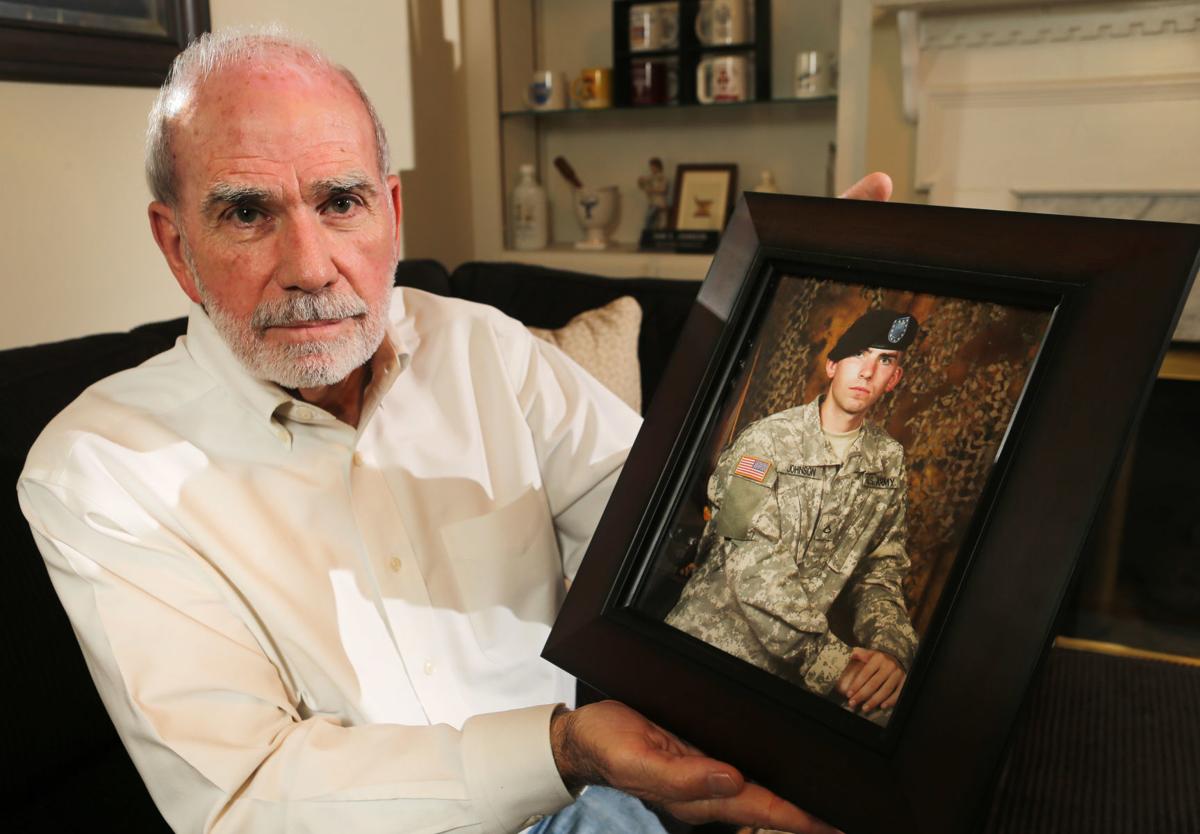 Dan Johnson holds a photo of his son, Sgt. Justin Johnson, who died of suicide in 2013. Dan Johnson is part of an American Legion Post 49 group that has begun a veteran suicide prevention initiative. 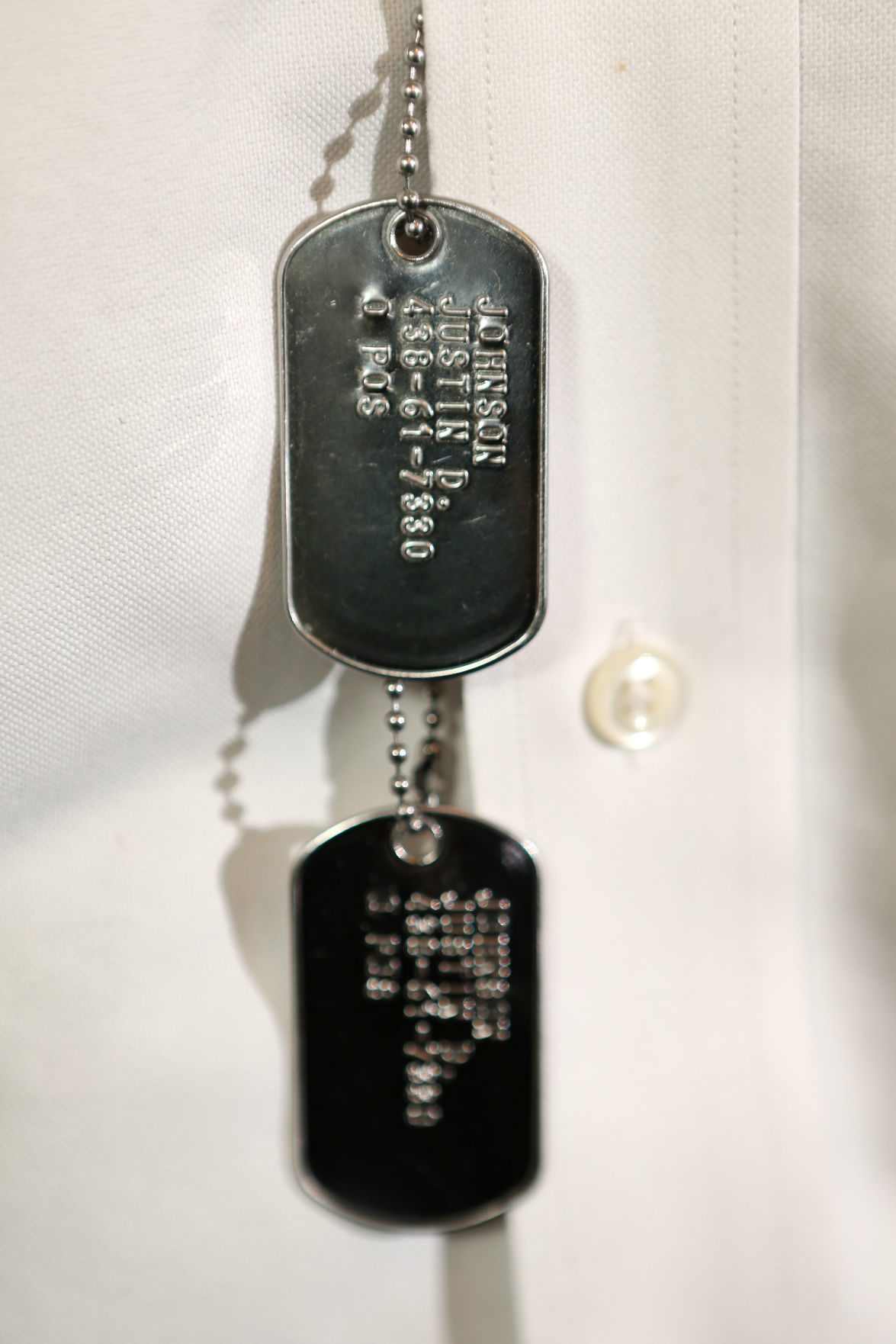 Dan Johnson started wearing his son’s dog tags when Justin Johnson was deployed with the National Guard to Iraq and Afghanistan. He has continued wearing them in his son’s memory. 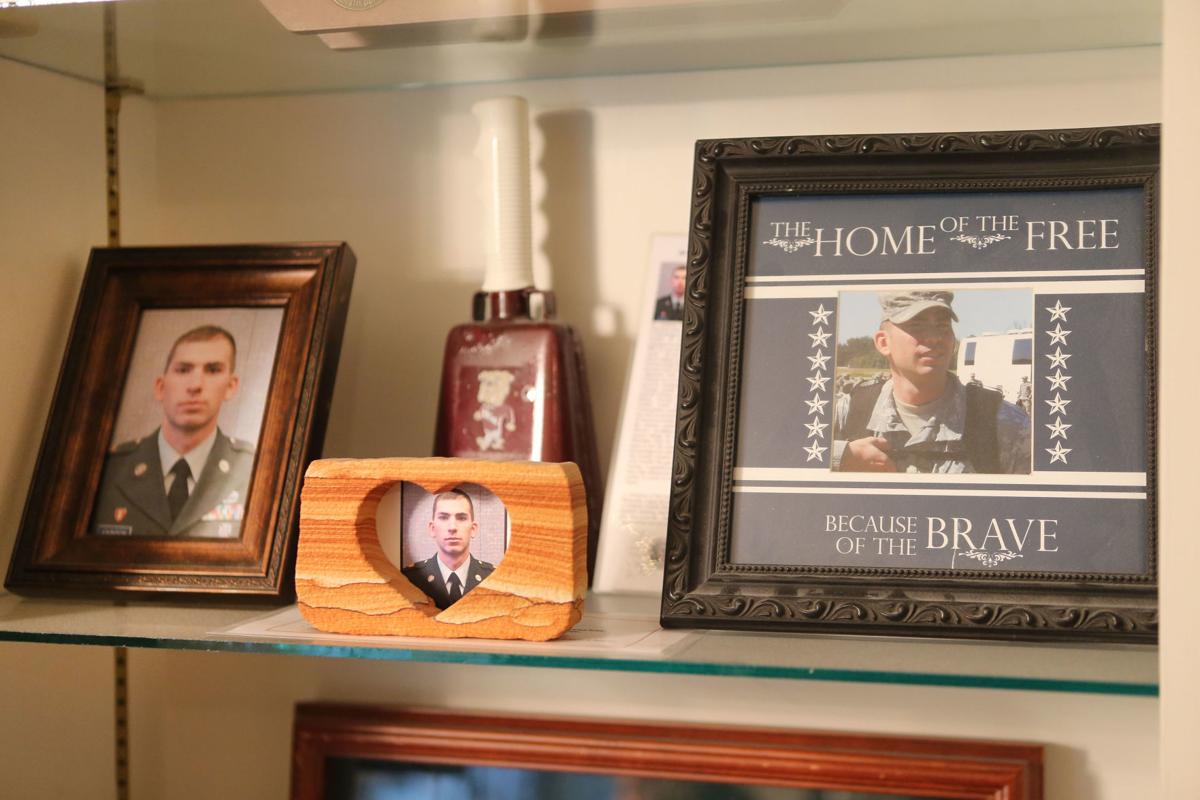 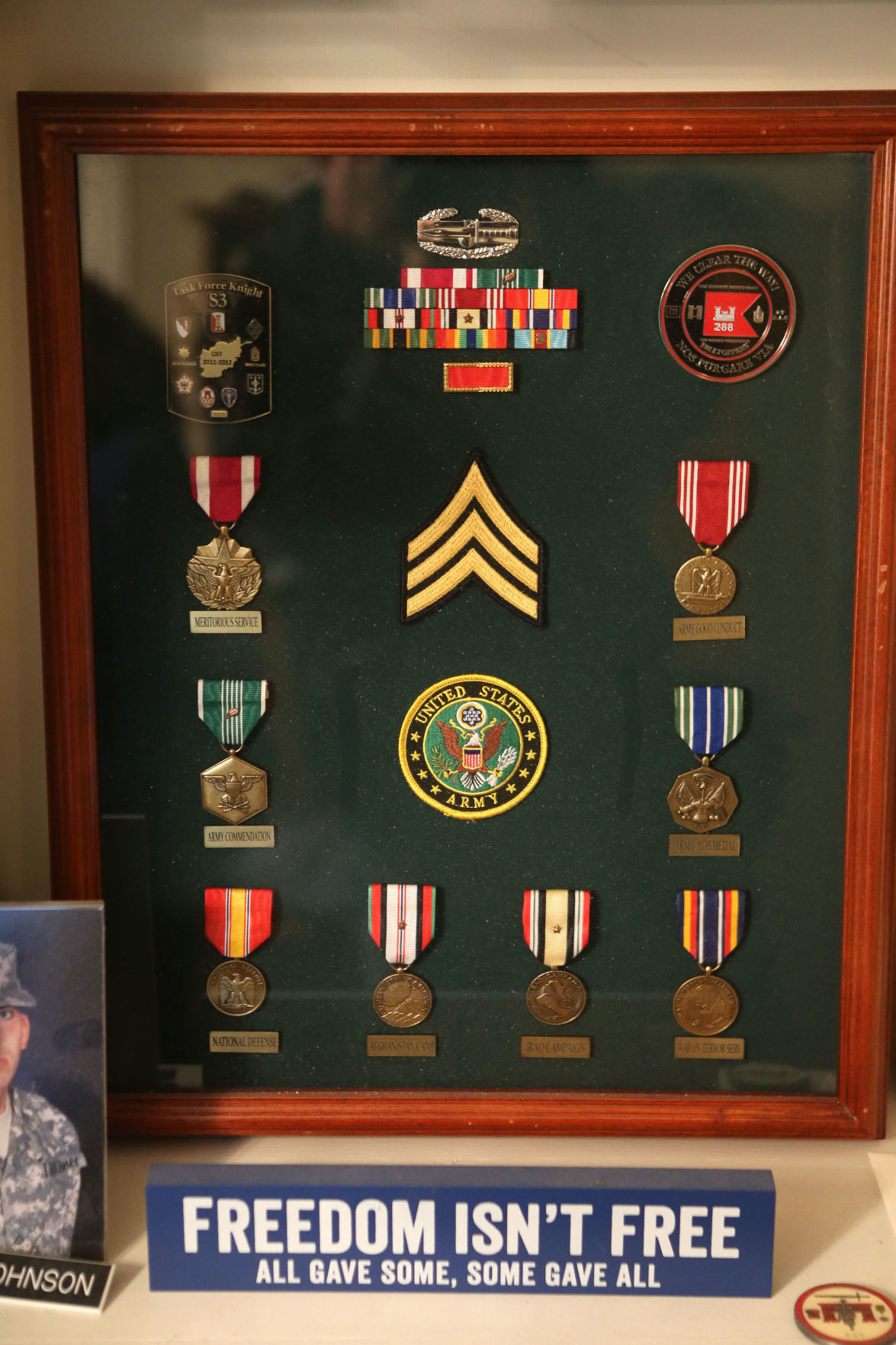 Dan Johnson holds a photo of his son, Sgt. Justin Johnson, who died of suicide in 2013. Dan Johnson is part of an American Legion Post 49 group that has begun a veteran suicide prevention initiative.

Dan Johnson started wearing his son’s dog tags when Justin Johnson was deployed with the National Guard to Iraq and Afghanistan. He has continued wearing them in his son’s memory.

“It’s like a bad dream,” said Dan Johnson, a member of the Tupelo post who lost his son, Sgt. Justin Johnson, to suicide in 2013. “I don’t want another family to have to go through what I’ve gone through.”

The post members have pulled together a working group aimed at giving veterans and their families better access to mental health resources.

“This is a national problem but it requires a local solution,” said post commander Mike Pettigrew.

“There’s a lot of people out there doing something, but it’s compartmentalized,” Pettigrew said during the meeting. “We need a knowledge base.”

The VA staff, including clinical psychologist Dr. Eileen Todd, were very encouraging during the meeting, stressing the importance of community partnerships.

“Two-thirds of the veterans who commit suicide are not in the VA system,” said Kimberly Shelton, VA Memphis suicide prevention coordinator.

There has been a spotlight on suicide deaths for veterans and those still serving.

Annually, more than 6,000 U.S. veterans, those who had been activated for federal military service but were not serving at the time of their death, have died from suicide between 2008 and 2017, according to the Veteran Suicide Prevention Annual Report released in September 2019. Veteran suicide deaths increased between 2016 and 2017, but fell below the high water mark set in 2014 when nearly 6,300 veterans died from suicide.

In 2017, the suicide rate for veterans was 1.5 times the rate for non-veteran adults after adjusting for age and sex. The suicide rates were highest among veterans ages 18-34, although veterans 55-74 had a higher number of deaths.

Growing up in Tupelo, Justin Johnson was surrounded by a legacy of military service. His grandfather Judson Johnson was a decorated World War II veteran who served as part of an Army Air Corps bomber crew. His father Dan Johnson was a medivac helicopter pilot in the U.S. Army, serving on active duty and in the Army reserves for more than 20 years and rising to the rank of lieutenant colonel.

While Justin Johnson was a student at Mississippi State University, he decided to join the National Guard. After training, he deployed to Iraq as a combat engineer with the 288th Sapper Company based in Houston. His unit was responsible for locating, identifying and destroying improvised explosive devices along the main supply routes.

“He loved what he did,” Dan Johnson said.

When Justin Johnson returned from Iraq, he went back to MSU to finish up his degree. It wasn’t a smooth transition.

“He had some less than normal behavior,” Johnson said. “Getting him help was difficult.”

When he graduated with a bachelor of science degree in education with the aspiration of becoming a physical therapist, members of his unit were preparing to be deployed to Afghanistan.

“He felt the need to go back with his battle buddies,” Dan Johnson said.

When Justin Johnson came back from Afghanistan in 2012, he worked as a personal trainer and picked up some additional classes with the intention of pursuing a career in nursing. After staying with his dad in Tupelo, Justin Johnson moved to Starkville in the summer of 2013 after completing prerequisites for nursing school.

Although Justin Johnson was never diagnosed with traumatic brain injury, he was in vehicles that were hit by IEDs. Dan Johnson suspects his son was having symptoms of post traumatic stress disorder, including nightmares and sleep walking.

In August 2013, Justin Johnson was at a crossroads, Dan Johnson said. He had applied to be a National Guard drill sergeant and he was still waiting to get into nursing school.

“He couldn’t find a job he liked,” Dan Johnson said.

His son’s frustration was clear, but the news that Justin Johnson took his life on Aug. 20, 2013, blindsided him.

Johnson has committed himself to speaking out about veteran suicide prevention and extending a lifeline to those in crisis.

“It’s not about me, but if I can keep one person from taking their life, I’ve done my job on this earth,” he said.

The American Legion members aren’t stopping with one meeting. The post’s chaplain hosts a mental health program on Fridays. A number of members are getting trained through the Life Core’s Assist mental health first aid program.

“We need a knowledge base per county,” Pettigrew said. “We want to help veterans and their families make the connections they need.”

Ideally, the post would like to develop a model that can be used by other American Legion posts and communities.