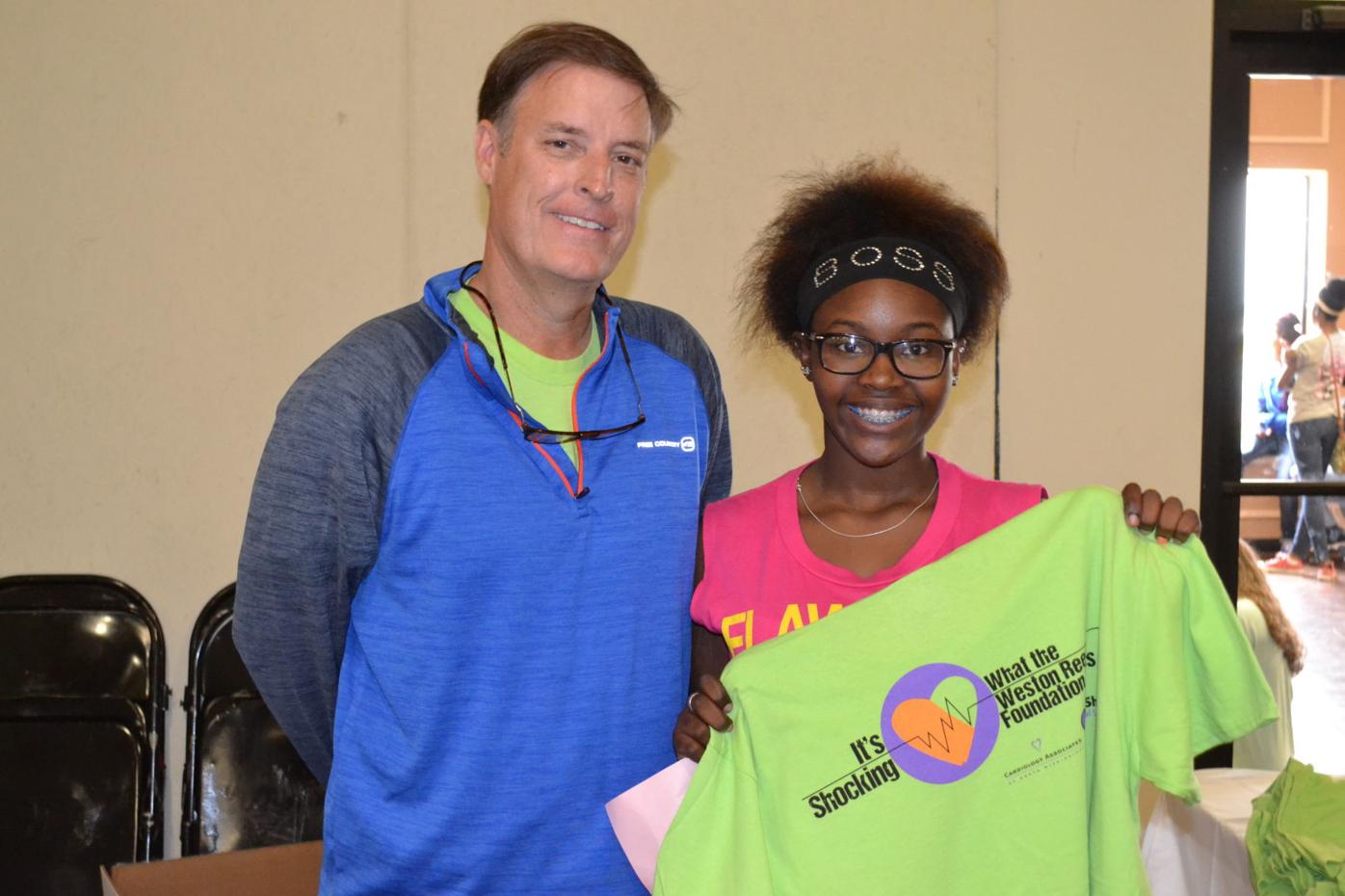 More than a hundred students like Tupelo cheerleader Kianna Vance took advantage of free physicals including an electrocardiogram to check their heart health at the 2016 Weston Reed Foundation event last August. Weston’s father, Lee Reed, said his family is grateful for the community effort honoring his son’s memory. 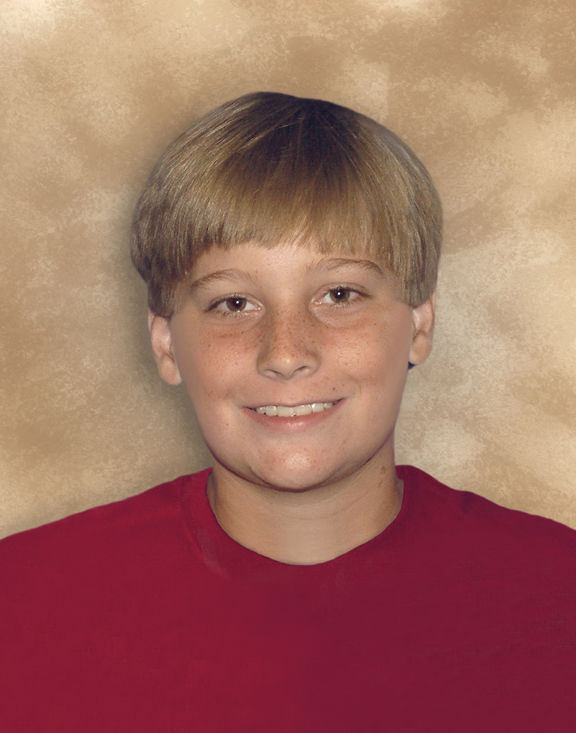 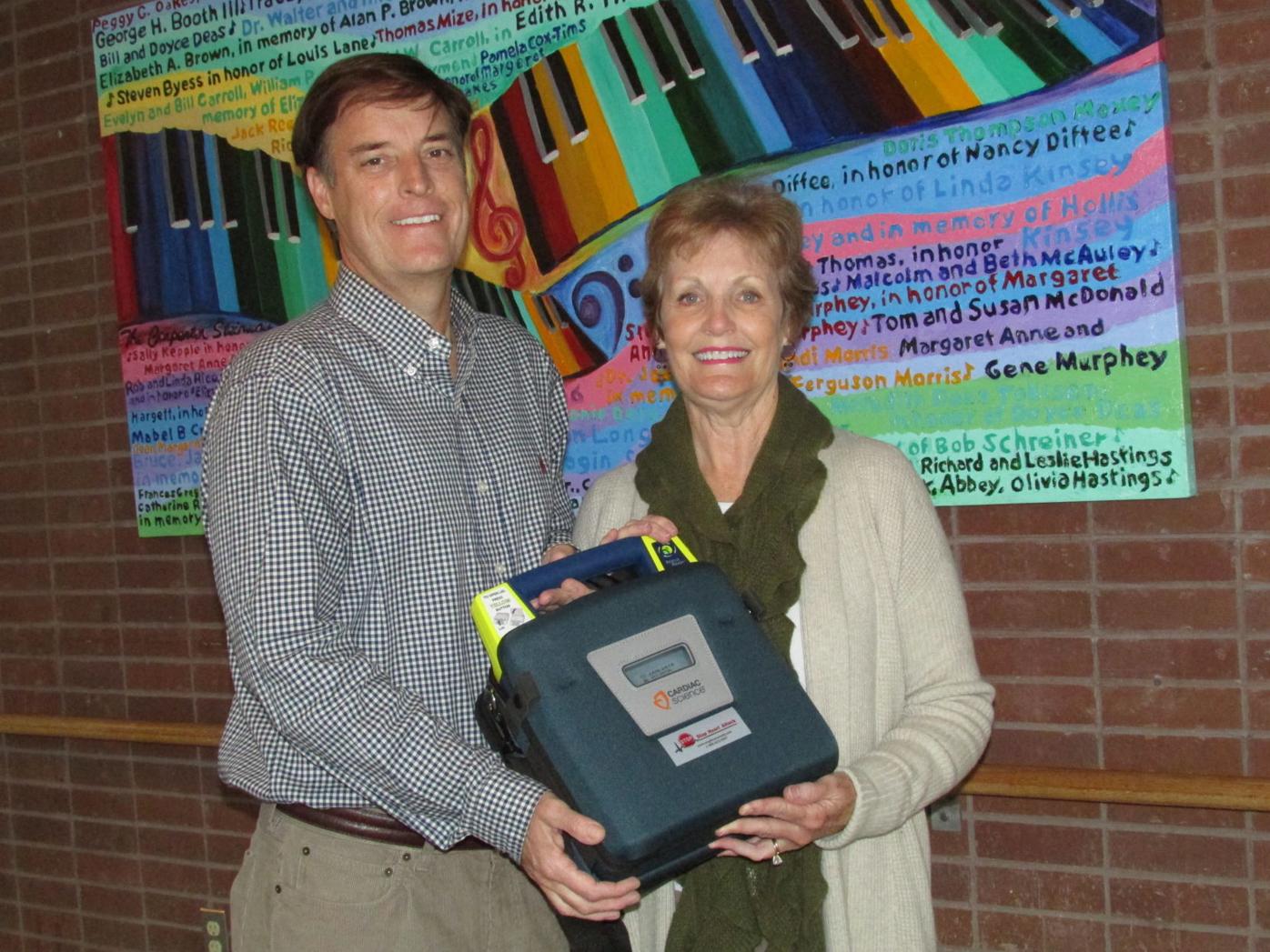 The Weston Reed Foundation, represented by Lee Reed, donated an automated defibrillator to the Tree of Life Free Clinic, represented by Polly Bailey, in 2013. The foundation has donated more than 100 defibrillators to schools, parks, community organizations and first responders in the past decade. 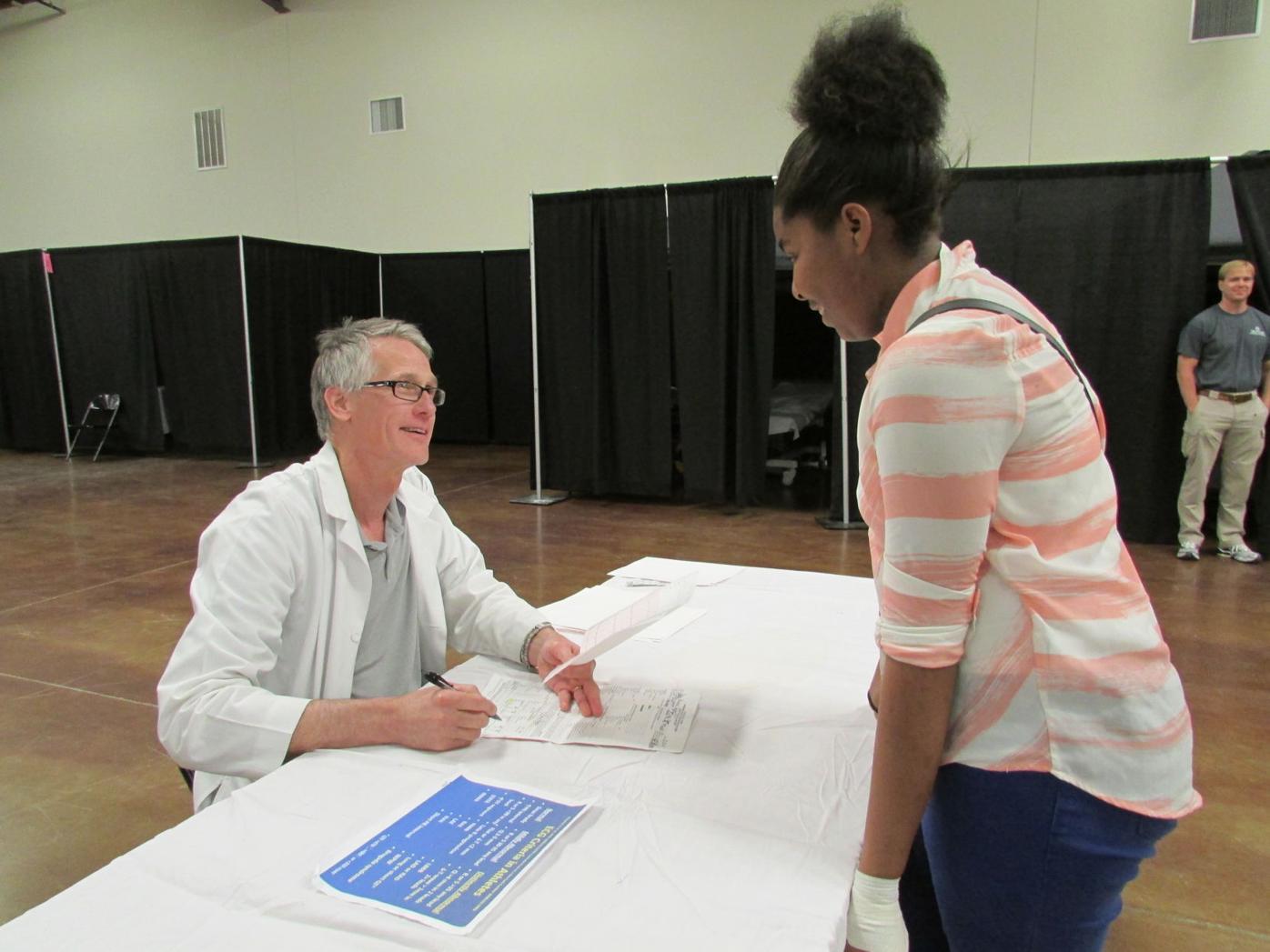 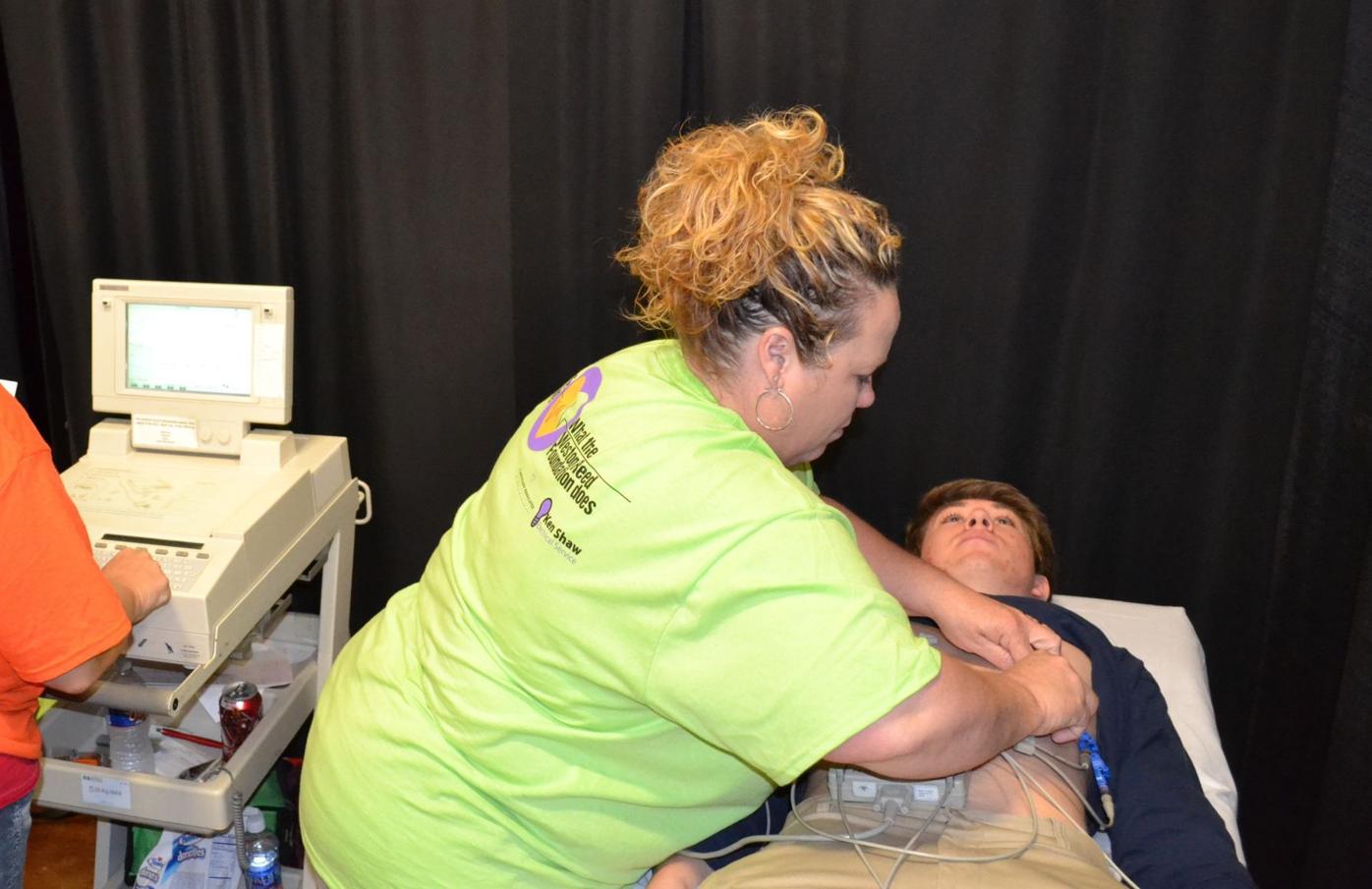 More than a hundred students like Tupelo cheerleader Kianna Vance took advantage of free physicals including an electrocardiogram to check their heart health at the 2016 Weston Reed Foundation event last August. Weston’s father, Lee Reed, said his family is grateful for the community effort honoring his son’s memory.

The Weston Reed Foundation, represented by Lee Reed, donated an automated defibrillator to the Tree of Life Free Clinic, represented by Polly Bailey, in 2013. The foundation has donated more than 100 defibrillators to schools, parks, community organizations and first responders in the past decade.

In the 10 years since his death, Weston Reed has touched thousands of lives in Northeast Mississippi.

The Weston Reed Foundation has screened more than 10,000 students and young athletes for heart conditions, placed dozens of automated defibrillators in schools, parks, community centers and with first responders, and trained hundreds on how to use them.

“In an emergency, people know what to do,” said Bev Crossen, who was part of a small group of volunteers who helped create the foundation. “I feel like we’re much better prepared than we were 10 years ago.”

Foundation volunteers will again gather in Weston’s name to offer free physicals for students that include heart health screening with an electrocardiogram (EKG) from 8 to 11:30 a.m. Saturday at the Children’s of Mississippi Tupelo clinic located in the Journal Office Park on South Green Street.

The work of the foundation has been very gratifying for the Reed family, especially knowing young athletes with otherwise silent heart conditions have been identified and treated. One of those young athletes was a friend of Weston’s who was present the day he died.

“They don’t have to go through what we went through,” said Lee Reed, Weston’s father.

Weston was just two weeks shy of his 12th birthday when he collapsed as a result of sudden cardiac arrest on a Tupelo soccer field on Aug. 16, 2007. There were physicians on the field, immediately administering CPR, but there was no automated defibrillator available.

“We can’t know if an AED would have saved Weston, but he didn’t have that chance,” Crossen said.

Crossen and her husband, Dr. Karl Crossen, who is a specialized cardiologist who focuses on the heart’s electrical system, were part of a group that organized the foundation and launched the first event three months after Weston’s death.

“There ought to be something we can do to better prepare the people in the community,” Crossen remembers saying to her husband.

The foundation also wanted to arm young athletes who didn’t realize they had an underlying heart condition, Crossen said. They worked with NMMC Sports Medicine program to offer free EKGs as part of the annual high school sports physicals in May and plan a separate Weston Reed Foundation event in August.

Even with the support of North Mississippi Medical Center and local cardiologists willing to volunteer their time and expertise to read the EKG results, it took some heavy lifting to clear legal and insurance hurdles.

“In the beginning, it was a process,” Crossen said.

The continuing effort it takes to offer the annual screenings and make automated defibrillators more widely available is a testament to both Weston and the region, Reed said.

“Weston was a loving, caring, encouraging child; Tupelo is a very loving, encouraging, caring town,” Reed said. “In a different city, they would tell you it’s not worth the expense for the risk.”

Sudden cardiac arrest occurs when the heart’s electrical signals are unexpectedly interrupted. The heart quivers instead of beating correctly. It affects between 326,000 and 395,000 Americans each year, according to the Sudden Cardiac Arrest Foundation.

The best chance of survival is immediate help from bystanders, who can call 911, start CPR and find an automated defibrillator.

In many cases, heart disorders in young people can fly under the radar because the symptoms can be subtle and feel normal. EKGs, which just look at the heart’s electrical system, can’t catch every heart condition, and there are athletes with suspicious EKGs who will have healthy hearts.

“There is a definite benefit,” said Tupelo pediatric cardiologist Dr. Frank Osei, who will be participating in this year’s Weston Reed Foundation event. “There are many things that can be picked up.”

To address concerns of athletes that a suspicious EKG could keep them from playing, the foundation worked with cardiologists to be able to offer limited echocardiograms during the physicals for those who need them, Crossen said. It allows them to clear those with healthy hearts at the event.

There’s been much debate over the benefits and costs of student athlete heart screening. The Mississippi High School Sports and Activity Association does not require them.

“It may seem like a small percentage, but when you’re the statistic, it’s as high as it can be,” Reed said.

Saturday’s event at the Children’s of Mississippi Tupelo clinic will offer students a comprehensive physical that meets the guidelines for sports participation, but it is not limited to athletes.

Students who take advantage of the free EKG will receive a Weston Reed Foundation T-shirt. Those who need further evaluation will receive a free echocardiogram at the event.

It’s a tremendous benefit to families for children to receive the comprehensive check without expense to their families, Wilkins said. It takes a small army of volunteers including cardiologists, family physicians, nurses, occupational therapists, physical therapists and athletic trainers, to offer the physicals.

“Knowing these kids have gone through a thorough evaluation is peace of mind,” Wilkins said.

Open to: Students 6th grade and up

What: Sports physicals including free EKG