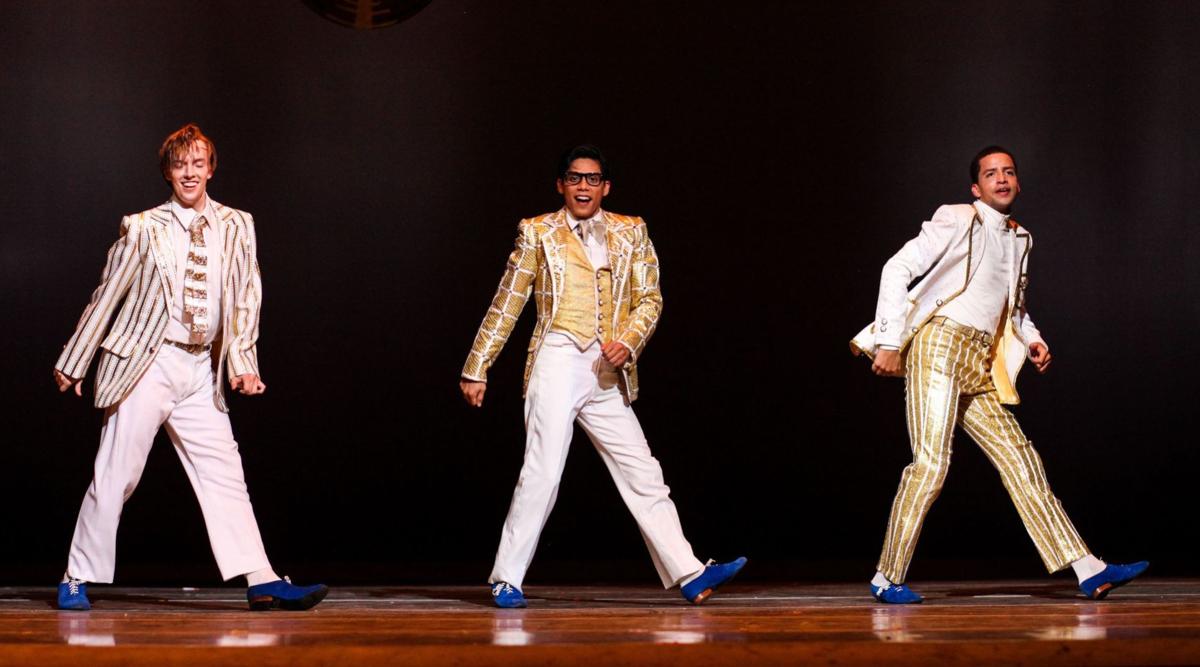 The Alabama Ballet production of “Blue Suede Shoes” follows the lives of three friends wearing blue suede shoes from the 1950s to the 1970s. 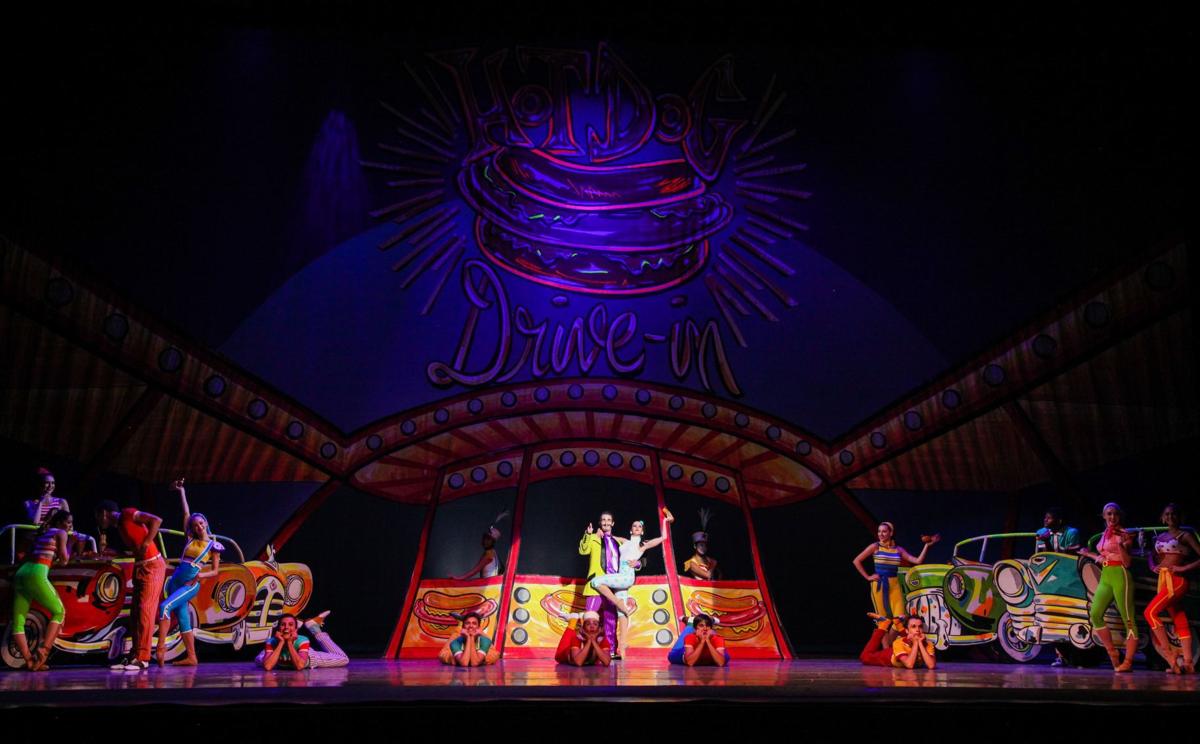 The drive-in theater is one of 16 sets used in “Blue Suede Shoes.” 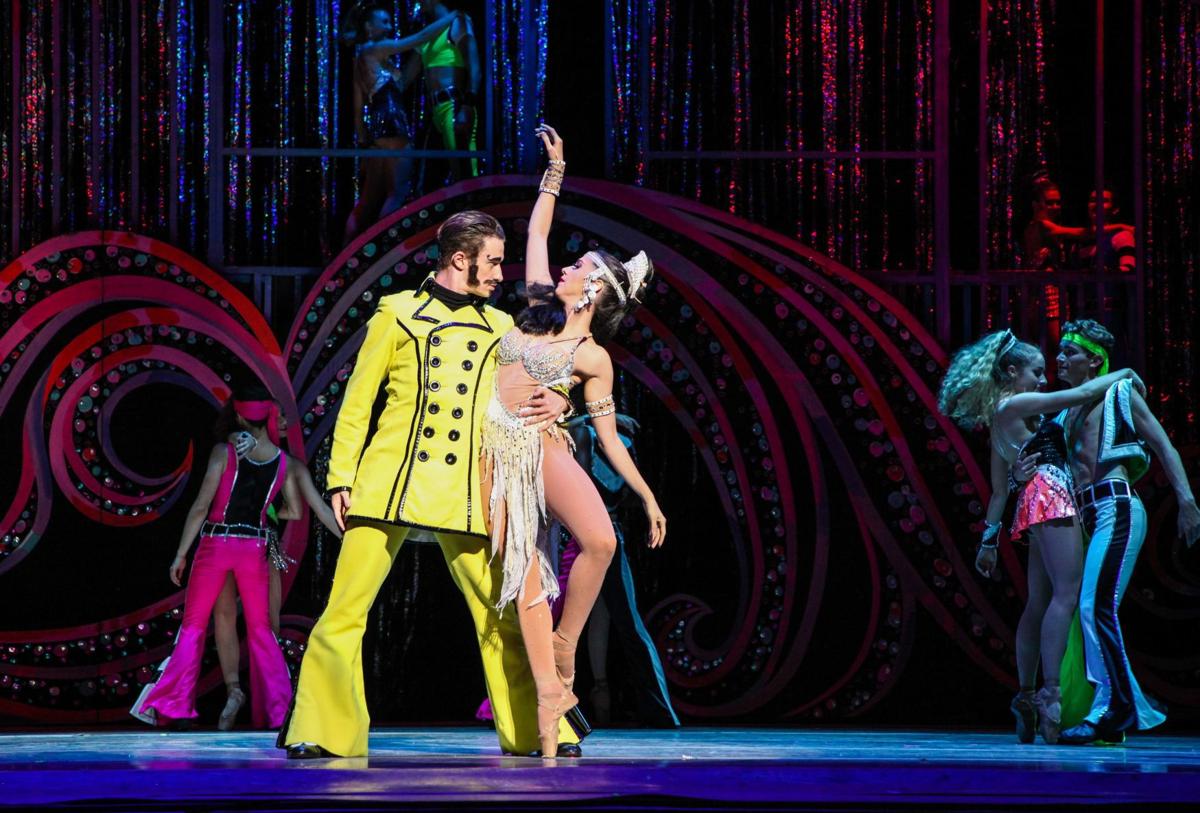 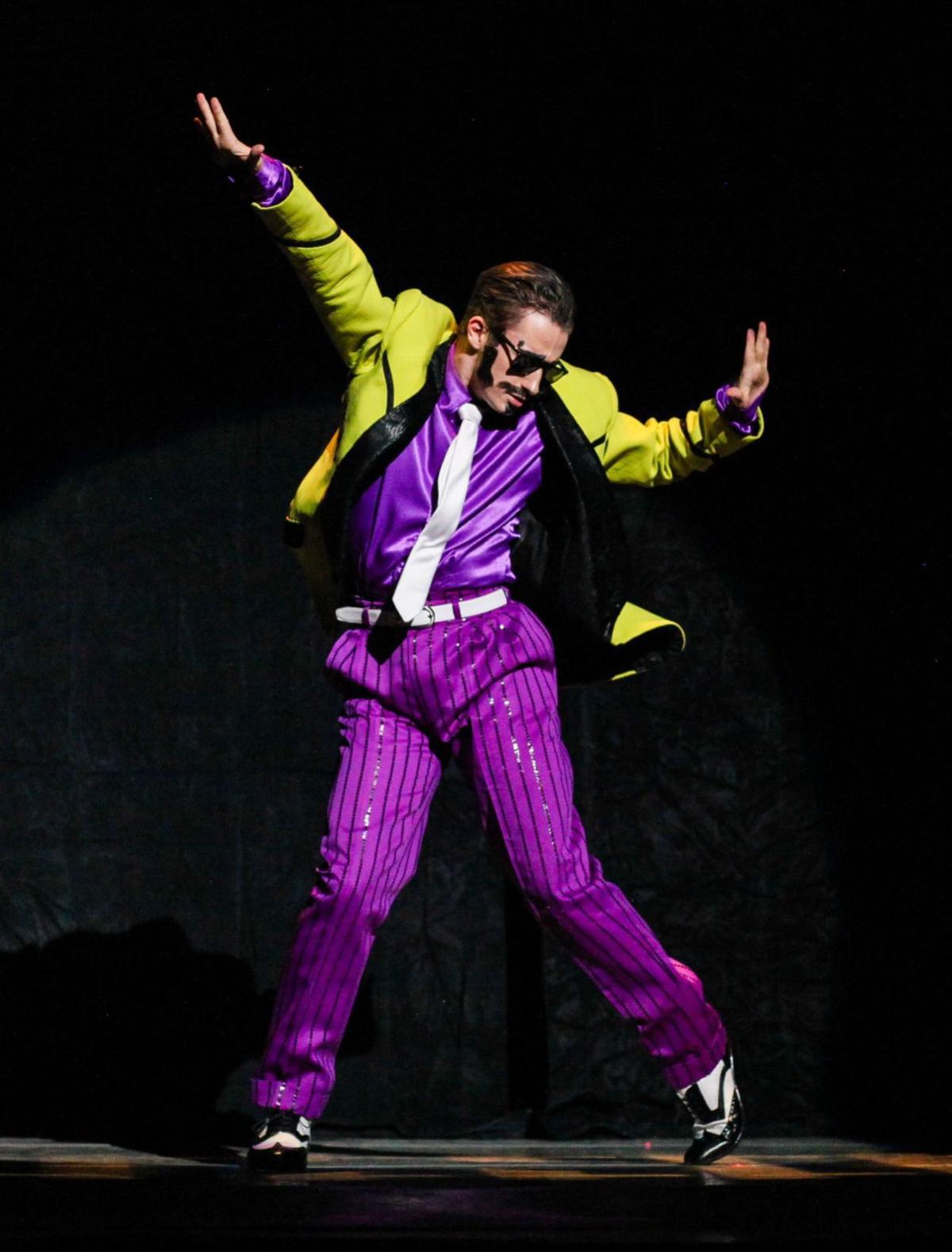 An Alabama Ballet dancer in a colorful costume - one of 280 designed by Bob Mackie, who's known for his elaborate dresses for Cher. 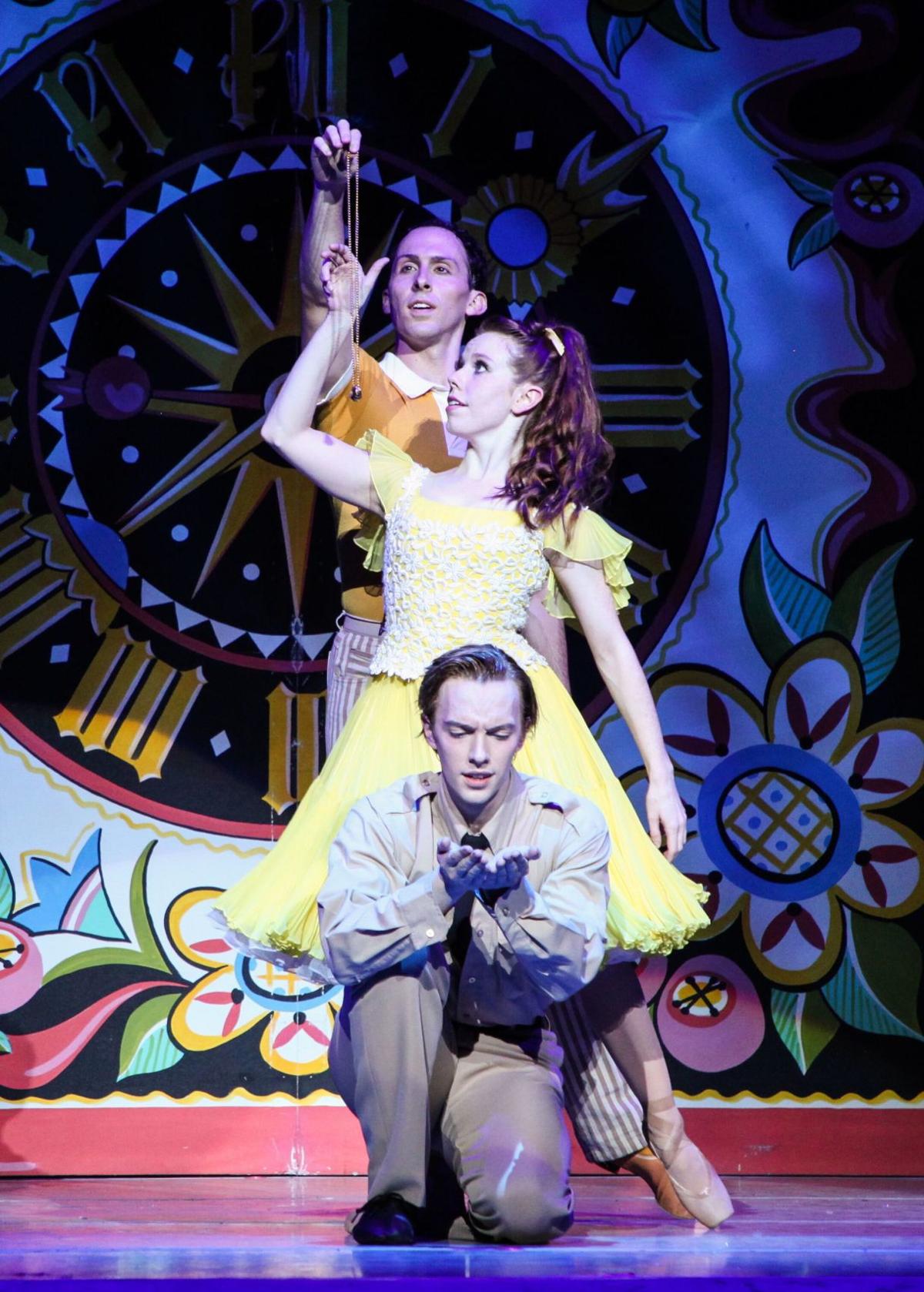 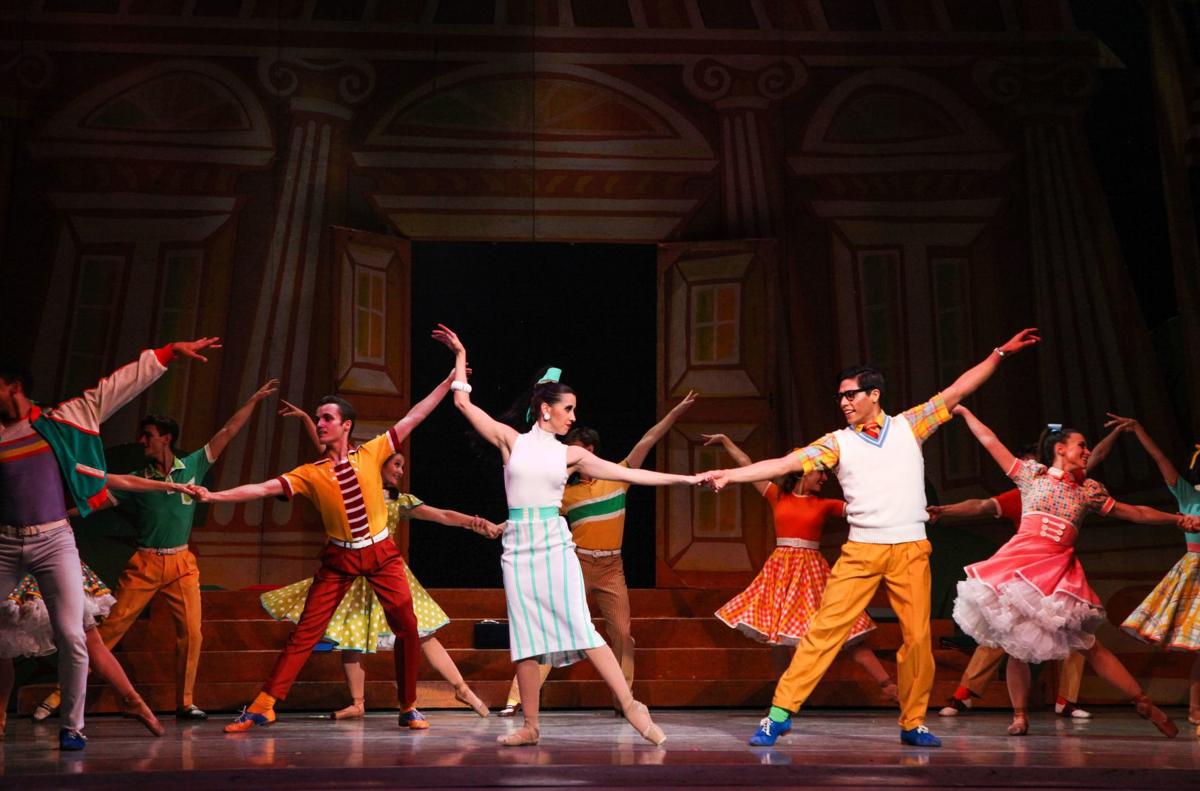 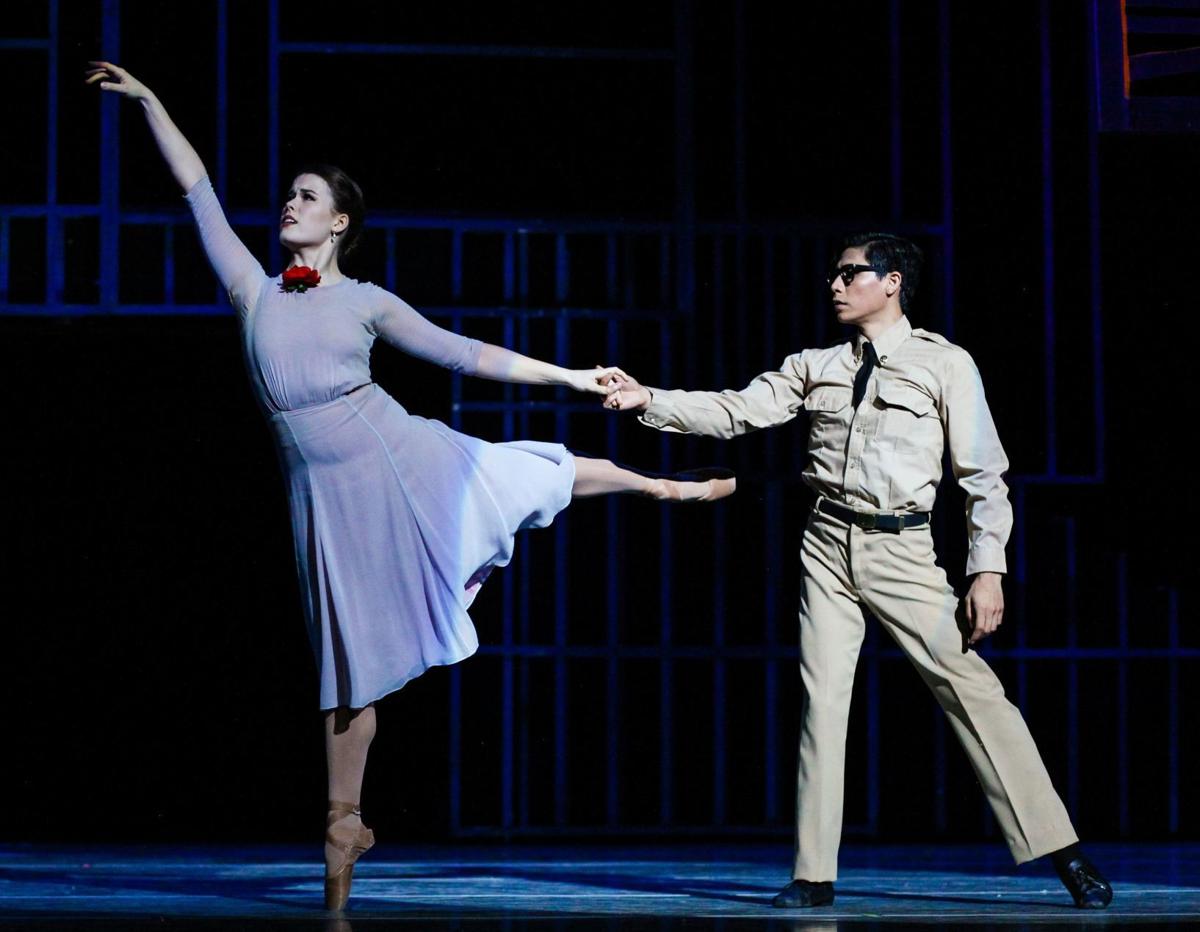 One of the “Blue Suede Shoes” friends, now in the Army, dances with a female partner.

The Alabama Ballet production of “Blue Suede Shoes” follows the lives of three friends wearing blue suede shoes from the 1950s to the 1970s.

The drive-in theater is one of 16 sets used in “Blue Suede Shoes.”

An Alabama Ballet dancer in a colorful costume - one of 280 designed by Bob Mackie, who's known for his elaborate dresses for Cher.

One of the “Blue Suede Shoes” friends, now in the Army, dances with a female partner.

Answering the call was Sharon Long, artistic director of the Tupelo Ballet. The reason Alvey reached out to Long was obvious.

“I thought, ‘Elvis, Tupelo.’ It really was a no-brainer,” Alvey said.

The end result of that conversation in late 2018 will happen Saturday afternoon when Alvey’s company performs the Elvis Presley-inspired ballet at the Tupelo High School Performing Arts Center.

The performance, which starts at 3 p.m., caps the celebration of Presley’s 85th birthday in his hometown.

“This is exciting for us,” said Long, whose Tupelo Ballet is presenting the performance along with the Tupelo Convention and Visitors Bureau and BancorpSouth. “It’s going to be great.”

“Blue Suede Shoes,” written and choreographed by Dennis Nahat, is not about Presley. Nor will you see an Elvis tribute artist performing in it.

Instead, the 90-minute production is a full-length ballet danced to 36 master recordings of Presley’s songs, combining classical dance with classic rock. Beloved Elvis tunes like “Love Me Tender,” “Hound Dog,” “Jailhouse Rock” and “Don’t Be Cruel” help tell the story.

“It’s quite a charming story,” Alvey said in a telephone interview from Birmingham. “It follows the ups and downs of the three high school friends, their trials and tribulations. It’s about their journey, but it’s carried along by the music of Elvis Presley.”

The production is a retrospect of the 1950s, ‘60s and ‘70s – from the start of rock ‘n’ roll to disco – as experienced through the lives of the friends who are first seen wearing their blue suede shoes in high school.

The show also features 16 sets and 280 costumes, all by Bob Mackie – the noted fashion designer known for his glamorous costumes for Cher.

Alvey said when she was negotiating with Nahat to secure “Blue Suede Shoes,” Long came to mind.

“We were talking with Dennis about getting the ballet, and it went so fast. Within a few weeks, we put a plan together and Sharon was my first call,” she said. “I discussed it with her, and she loved the idea. She jumped at the opportunity. ... I’m happy to connect with Sharon about this project and I’m glad it’s going to work out.”

Long got a preview of “Blue Suede Shoes” when the Alabama Ballet performed it in October in Birmingham.

“We had to go see it,” she said. “It’s nothing but Elvis music. And the costumes and the sets are thrilling.”

The Tupelo and Alabama ballet companies have had a good working relationship for years. The Tupelo Ballet has hosted two Alabama Ballet productions: “Swan Lake” in 2006 and “Romeo and Juliet” in 2014. Some of Long’s students have studied with the Alabama Ballet.

To have a professional dance company come to Tupelo requires grant funding and community support, Long said. In addition to the Tupelo CVB and BancorpSouth, the production is supported by the Elvis Presley Birthplace, South Arts and the National Endowment for the Arts.

“A lot of times it’s really expensive to present a full professional performance,” Long said. “We got a lot of funding for that through the city and outside the state of Mississippi through South Arts.”

Alvey, a native of England, said her oldest brother had a record collection that included Presley. “(Elvis) was quite an influence in our household,” she said.

As her company prepares for “Blue Suede Shoes,” Alvey said her dancers are now familiar with the King of Rock ‘n’ Roll and are excited to perform in his hometown.

“The rehearsal process was such a joy,” she said. “We could sing with some of the songs. A lot of the dancers were not so familiar, interestingly. But they’re all die-hard fans now.”

Reserved seating tickets are $20 per person and available through tupeloballet.com.