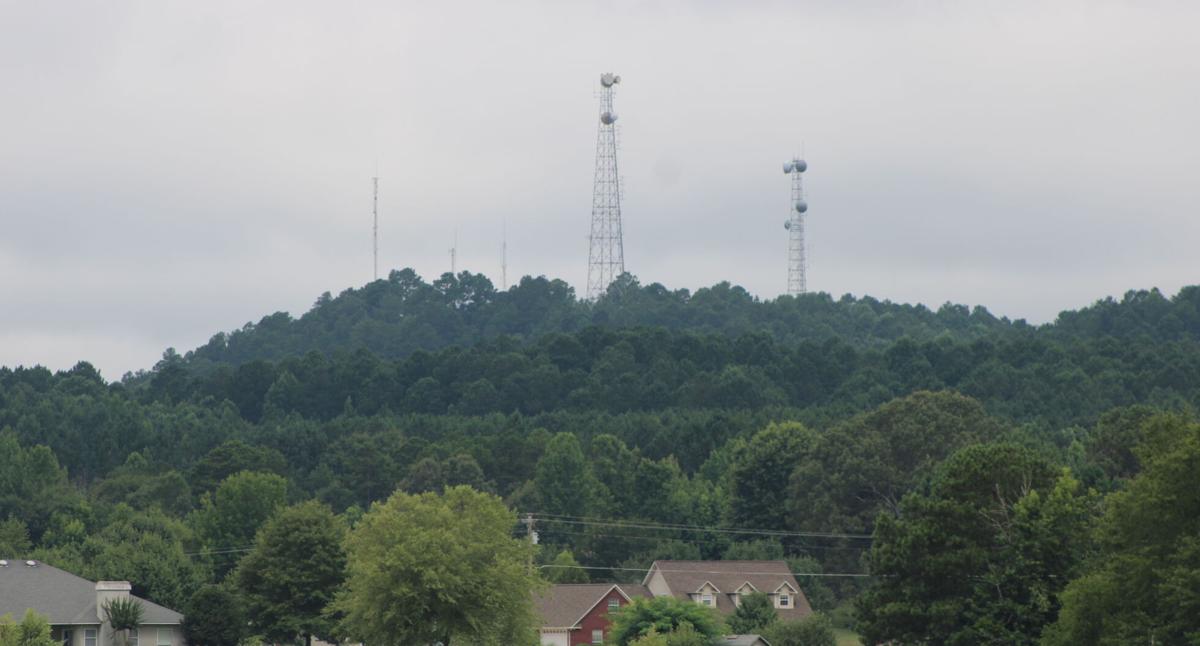 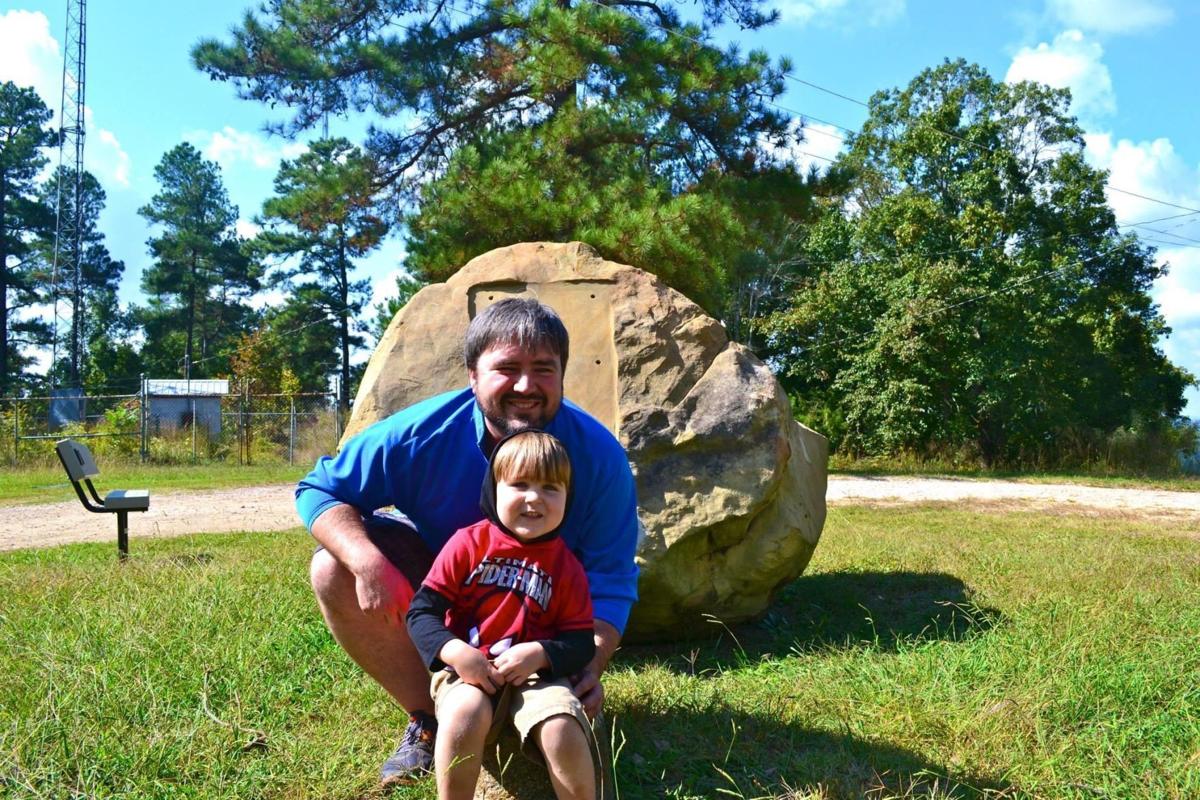 Justin Sutton and his son, Ben, pose for a photo on top of Woodall Mountain in 2013. Justin and Ben have been to the highest point in 26 states as part of the Highpointers Club. 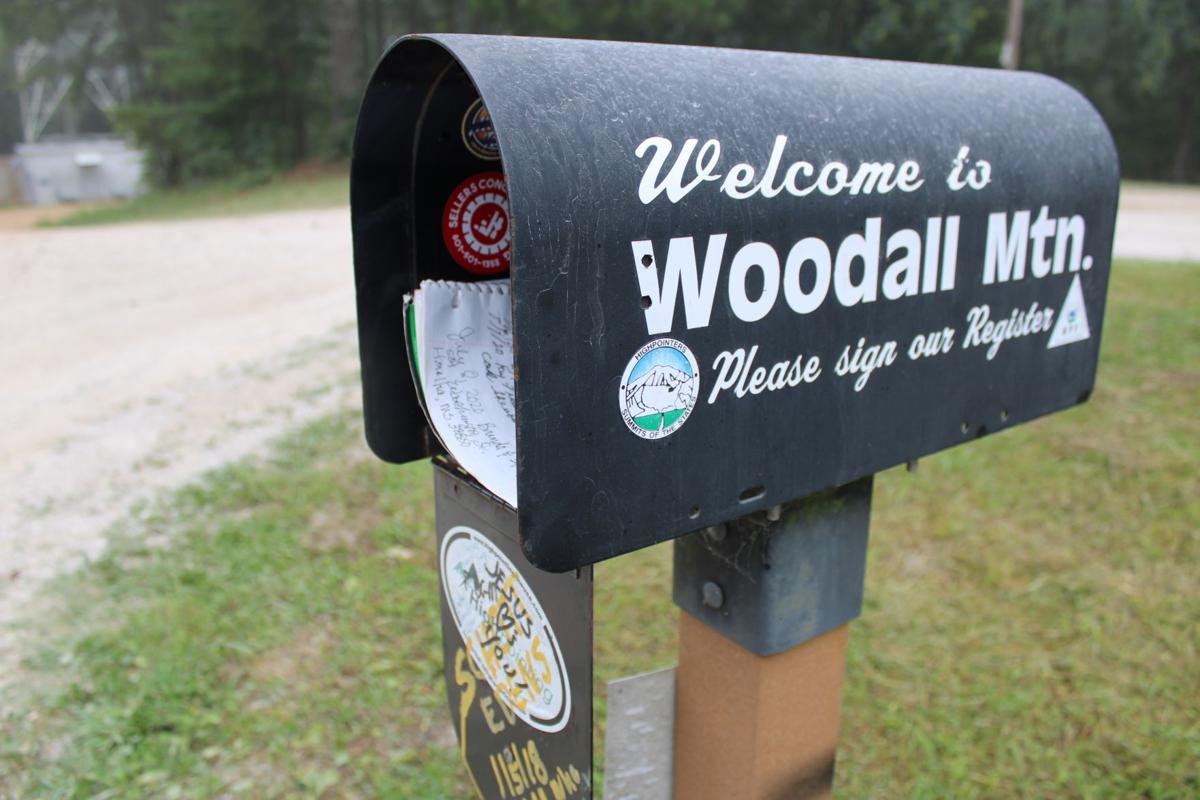 A notebook sits in the mailbox atop Woodall Mountain for visitors to sign in. 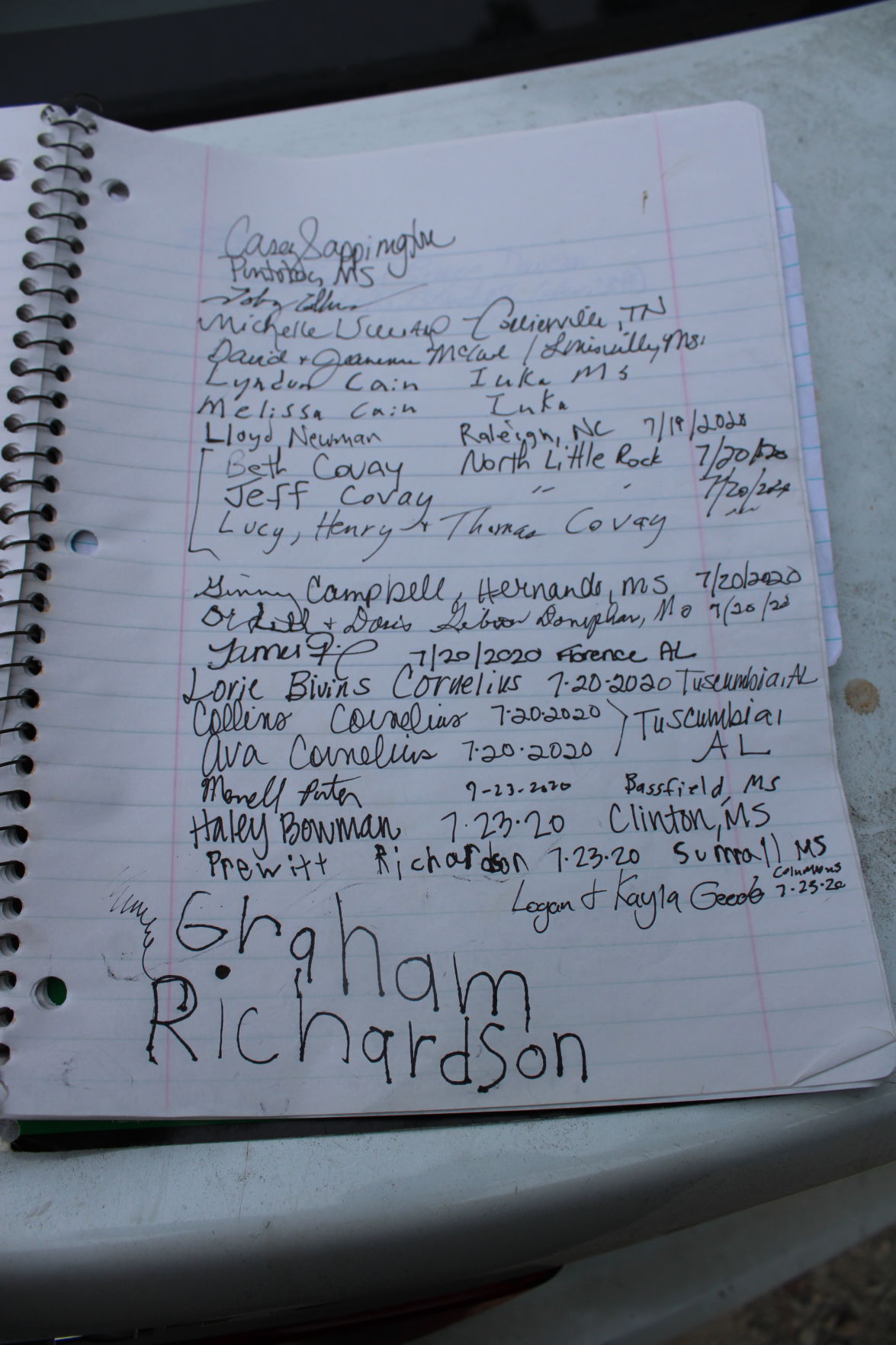 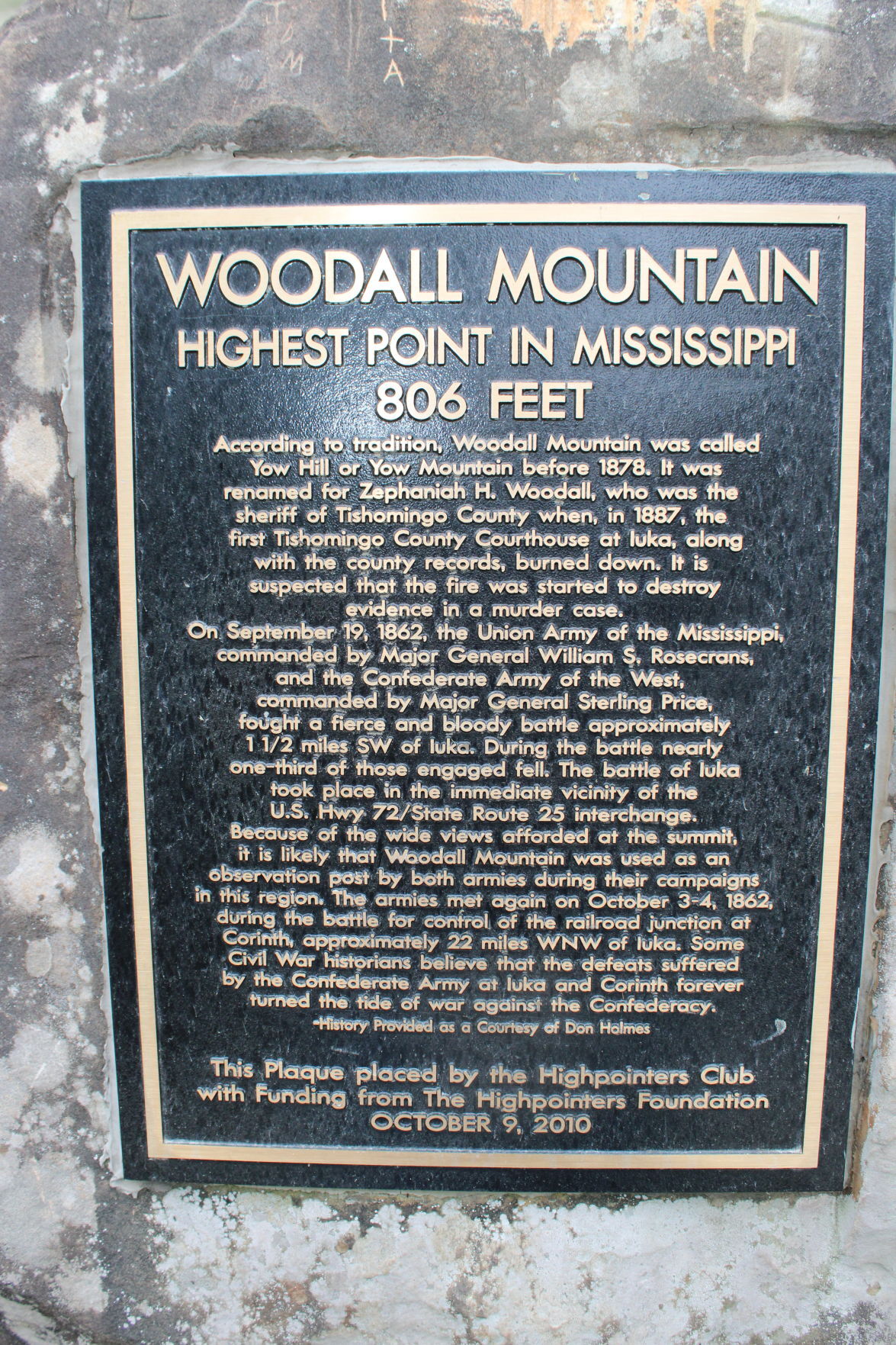 A plaque embedded in a boulder tells the history of Woodall Mountain. 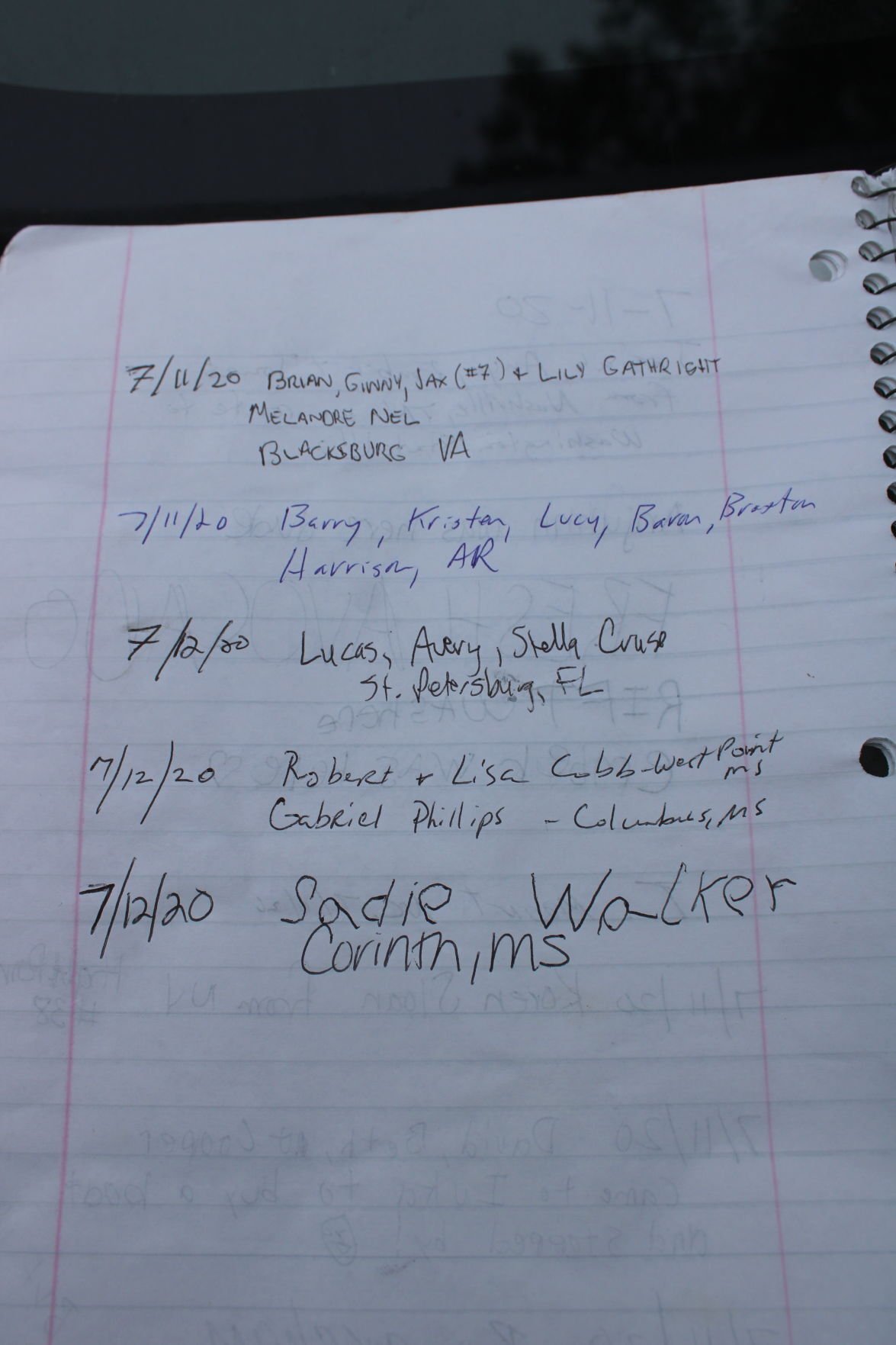 Woodall Mountain visitors write their names and hometowns in the notebook register book. 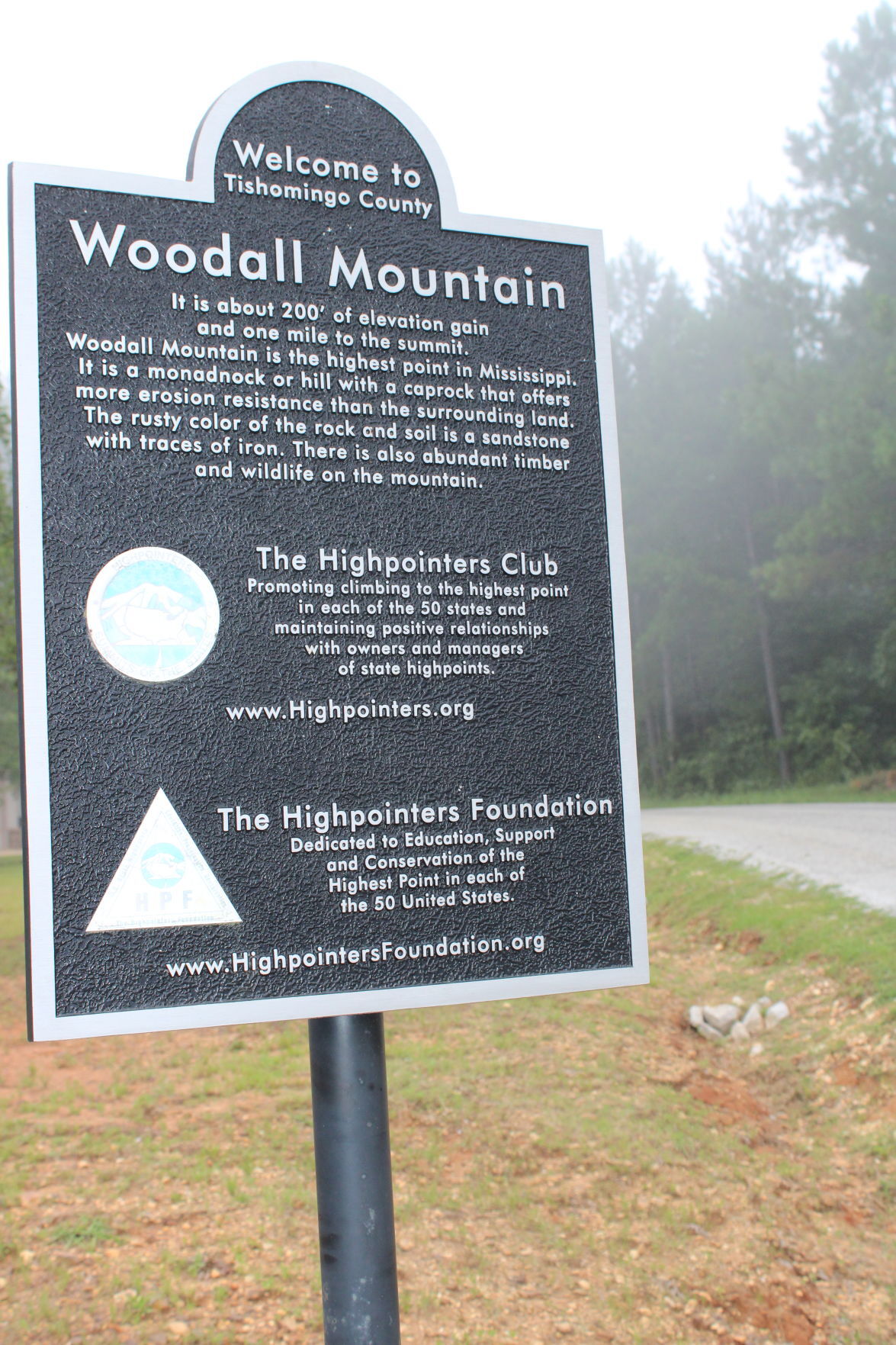 The Highpointers Club and Highpointer Foundation show support of Woodall Mountain by placing a marker at the base. The road behind the sign is County Road 185, which leads to Woodall's summit. 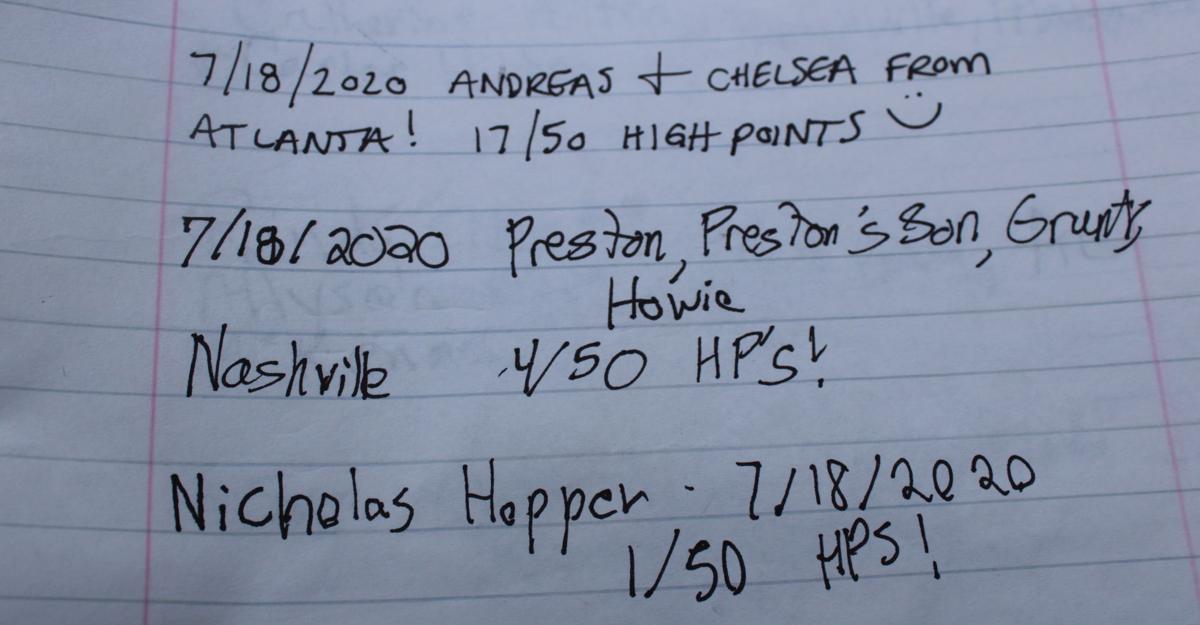 Highpointers Club members sign in the Woodall sign-in book their names and how many highest state points out of 50 they've visited. 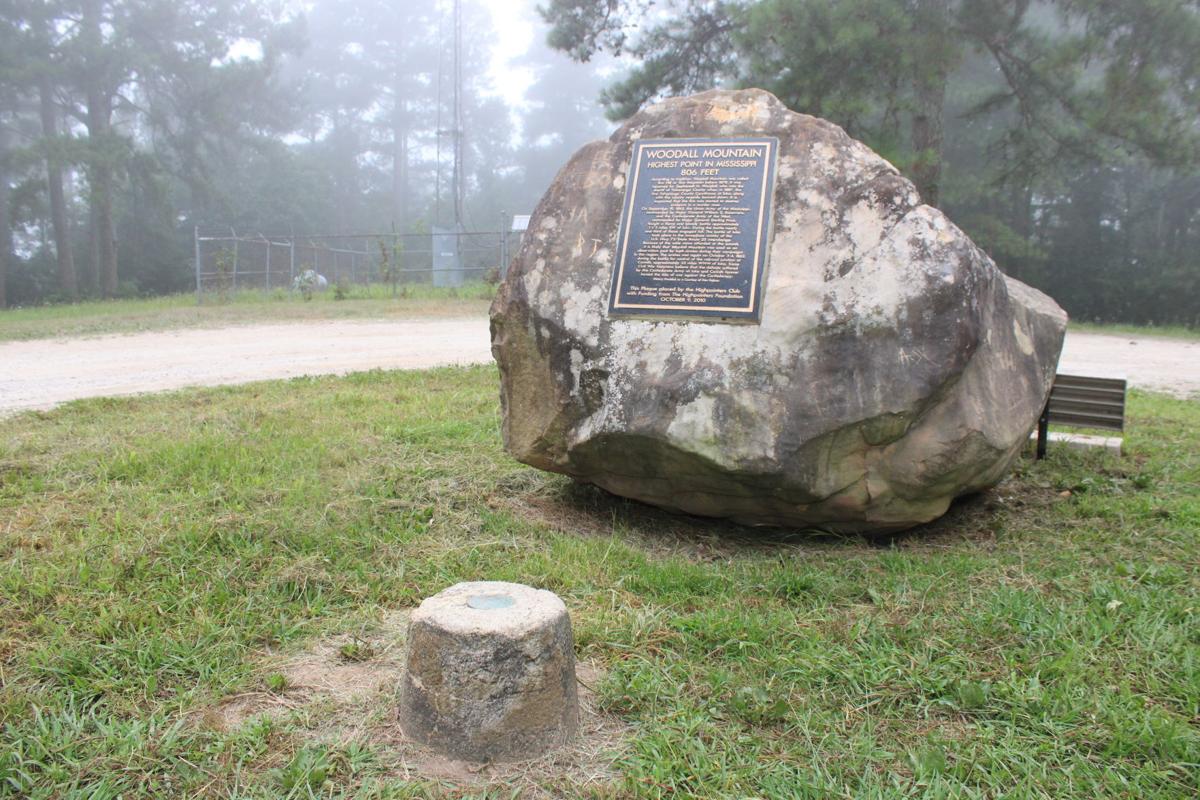 A boulder and a marker at the top of Woodall Mountain near Iuka as Mississippi’s highest geographic point (806 feet above sea level).

Justin Sutton and his son, Ben, pose for a photo on top of Woodall Mountain in 2013. Justin and Ben have been to the highest point in 26 states as part of the Highpointers Club.

A notebook sits in the mailbox atop Woodall Mountain for visitors to sign in.

A plaque embedded in a boulder tells the history of Woodall Mountain.

Woodall Mountain visitors write their names and hometowns in the notebook register book.

The Highpointers Club and Highpointer Foundation show support of Woodall Mountain by placing a marker at the base. The road behind the sign is County Road 185, which leads to Woodall's summit.

Highpointers Club members sign in the Woodall sign-in book their names and how many highest state points out of 50 they've visited.

A boulder and a marker at the top of Woodall Mountain near Iuka as Mississippi’s highest geographic point (806 feet above sea level).

IUKA • Justin Sutton had heard the stories in his youth that Duck Hill, located near Grenada, was the highest point in Mississippi.

Then, in his ninth-grade Mississippi studies class at Brandon High School, Sutton was introduced to Woodall Mountain. Rising 806 feet above sea level in Tishomingo County, Woodall stands over all other geographic locations throughout the state.

Sutton didn’t forget what he learned about Woodall, especially after joining a club whose members strive to reach the highest point in each state.

“I’ve always been a geography nerd, so it sounded like it would be really cool to visit every high point in the country,” said Sutton, the assistant principal at Ocean Springs High School.

Sutton made his first trek to Woodall in 2013. Other visitors – experienced mountain explorers, local residents and curious vacationers – have driven the mile-long gravel road that leads to the summit of Woodall.

“I thought it was neat to visit my home state’s high point,” he said. “It’s not towering or anything like that. I think a lot of people in Mississippi don’t know it’s there.”

Woodall, privately owned by the Brown and Jourdan families of Tishomingo County, is located southwest of Iuka. It’s a monadnock – a hill with a caprock that offers more erosion resistance than the surrounding land.

You don’t have to be a mountain climber to reach Woodall. It’s easily accessible by vehicle from Mississippi Highway 25. Turn at one of the two Woodall signs on the highway and follow other signs to County Road 185, which is the starting point of a narrow gravel road that winds its way to the top.

Woodall doesn’t have the snowcaps like Alaska’s Denali, the nation’s highpoint at 20,310 feet. You can recognize Woodall from a distance by the towers and antennas on leased land on the top transmitting radio, microwave and cell signals.

Compared to the other 49 states, Woodall ranks near the bottom of the height scale. It’s 47th in the nation, with Louisiana (535 feet), Delaware (447) and Florida (345 feet) ranking lower.

But what it lacks for size, Woodall makes up for in history. Once known as Yow Hill or Yow Mountain, it was renamed Woodall Mountain in honor of Tishomingo County Sheriff Zephaniah H. Woodall.

Woodall is known as America’s Bloodiest High Point because of the September 1862 Civil War battle in Iuka. Union troops controlled the mill and fired artillery pieces on Confederate troops below, resulting in a Union victory.

Edward Long Jr., an Iuka native who practices law in West Point, recalls camping on the mountain as a Boy Scout during the 1960s. Camping hasn’t been allowed on Woodall since the 1970s.

“Back in the day, there was a fire tower up there,” he said. “We’d camp there and cook out. We’d also ride our bicycles up there. One day, I was riding with a friend and we saw what we thought was a bear cub. I’m pretty confident it was a cub we saw.”

Long returned to Woodall on July 25 for the first time since December 1969, using his car instead of a bicycle to reach the top.

“It was a nostalgia-type thing for me to see it again,” he said. “I’d been wanting to ride up there for years. It’s changed from the last time I was up there.”

One of the additions Long noticed was a boulder sitting in the middle of the circle dirt drive at the top. A plaque detailing Woodall’s history is embedded in the boulder, which came from a quarry in Alabama.

Long also took time to sign a school notebook found in a mailbox. All visitors are greeted by the “Welcome to Woodall Mtn.” message on the mailbox and encouraged to sign their name and hometown.

A review of the notebook, noted as having been placed in the mailbox on July 5, shows people from 17 states – including Alaska, Connecticut and New York – signing in at Woodall. Mississippi residents from 27 different cities from Southaven to Pass Christian also checked in.

Some of the signatures in the sign-up book, especially those from out of state, are followed by markings such as “4/50 HPs” or “17/50 High Points.” Those indicate their members of the Highpointers Club, the group Sutton joined after getting hooked on hiking while visiting friends in North Carolina.

Robert “Bob-O” Brown, whose family is among the Woodall owners, said he’s seen Highpointers from across the country visit Tishomingo County.

“Since the Highpointers have gotten really big, the interest (in Woodall) has grown,” he said. “You won’t believe the people I see in those books coming from everywhere. The Highpointers will send somebody to pick up the book with all the peoples’ names in it and put another one in the mailbox.”

The Highpointers Club gives back to support each state’s top point through its Highpointers Foundation. For Woodall, it donated the boulder plaque, posted an information sign at the base of the mountain road leading to the Woodall peak and installed a park bench at the top.

The club each year hosts a convention at a high point, and in 2010 it came to Woodall. The following year, the Highpointers presented its Frank Ashley Award in 2011 to the Brown family. The Frank Ashley Award recognizes significant volunteer service to the club.

Sutton said Highpointers like himself are grateful to the Woodall ownership families for access to the mountain.

“Even though it’s privately owned, we appreciate them allowing people to visit it,” he said. “A lot of the highpoints we visit are very accessible to people. You can make some of them on hikes, or like Woodall Mountain, you can drive right up to the top.”

Going to the state’s highest point for the first time can be a fascinating experience. Brenda Villarreal of Houlka had never heard of Woodall until she and her husband, Soapy, made a spur-of-the-moment decision to visit July 8.

“We were at Tishomingo State Park. Neither one of us had been to Iuka, so we went to Iuka and messed around there a little while, and then we saw the sign,” she said. “I had seen it on the map, so I said, ‘Let’s go to Woodall Mountain.’”

Villarreal described her first time at Woodall as “amazing.”

“I had no idea we had anything like that,” she said. “I lived in Mississippi my whole life, but never knew anything about it. We didn’t think anything about it being that high until you get up there. It’s pretty high, but it’s awesome.”

Sutton made his first trip to Woodall a family venture. During a football weekend at Mississippi State University, Sutton and his son, Ben, took a side trip to Tishomingo County.

“I thought since we’re this close, I might as well take him to Woodall Mountain,” he said. “I went to Mississippi State and lived in different places in the state, but I never thought about going up Woodall Mountain. It never registered to me to do that. When I got in the Highpointers Club, I said, ‘Let’s go.’”

The Woodall visit was Justin’s sixth highpoint and Ben’s third. They both now have 26 highpoints.

Being a Highpointer has taken Sutton to regions of the country he’d probably would not have visited otherwise. He noted that most of the highest elevations in the states aren’t in tourist areas.

“They’re in random areas you may not go to,” he said. “Some are great. I think you have to have a sense of adventure in you to want to travel around.”

Sutton said he’s has been to some scenic high points during his journey, but they’re not as unique as Woodall Mountain.

“I think they all have their own story, but I think the most exciting part about Woodall Mountain is that I can say, ‘I’ve been to the top of my state now,’” he said.