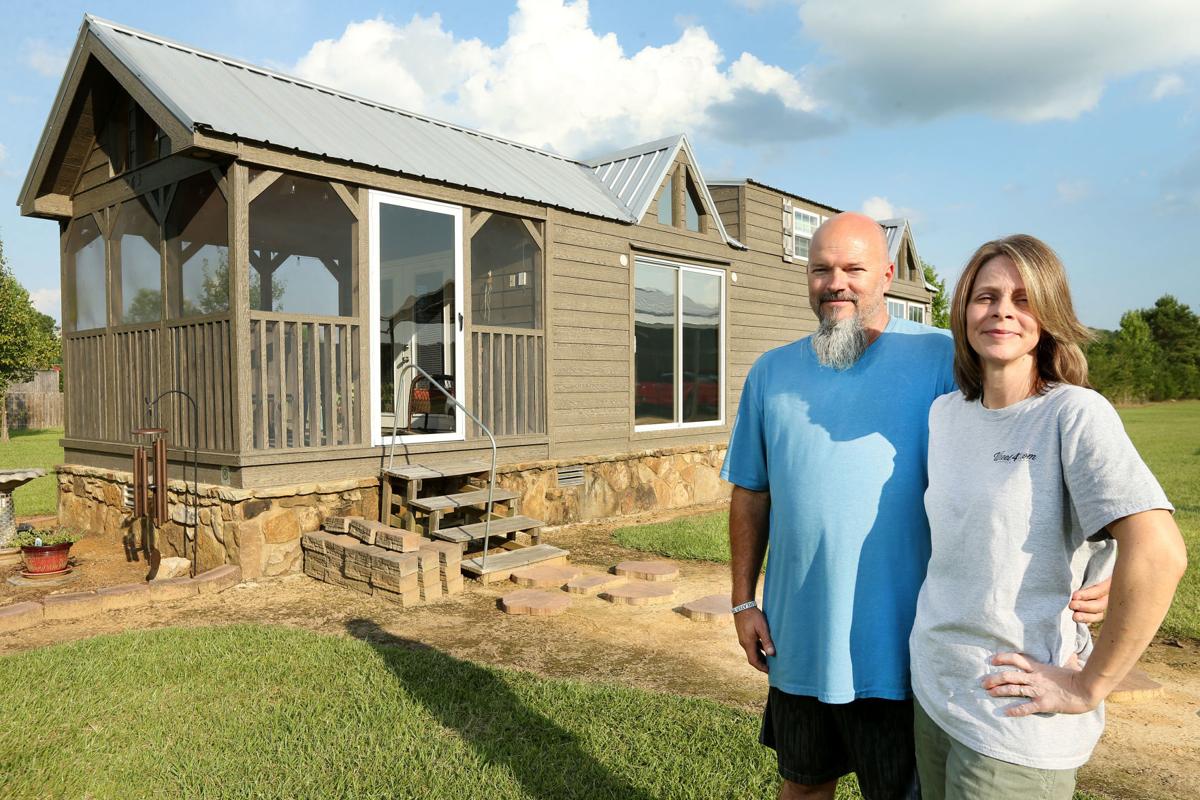 Jeff and Tammi Edwards of Mooreville moved into their tiny house in the summer of 2016. The 399-square foot home, not counting the loft or screened porch, sits on 2 acres. 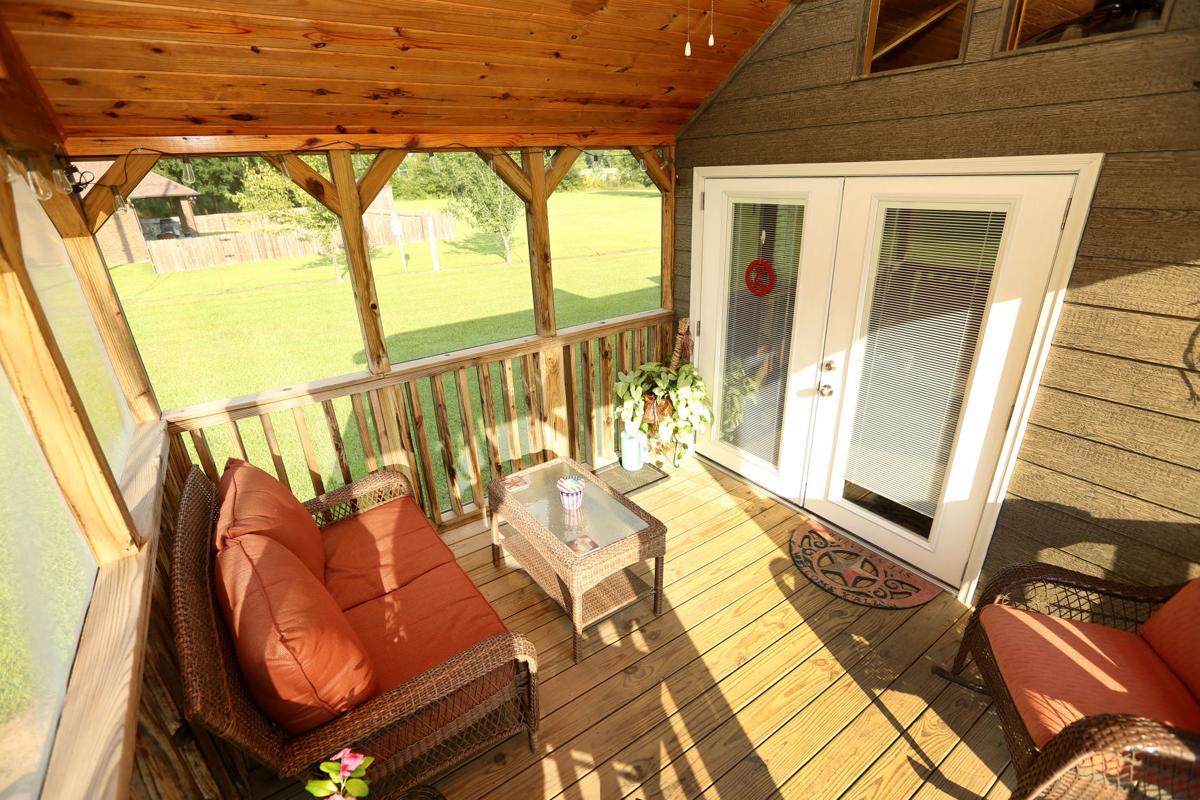 A screened porch strung with Edison lights is the perfect cozy spot at night. 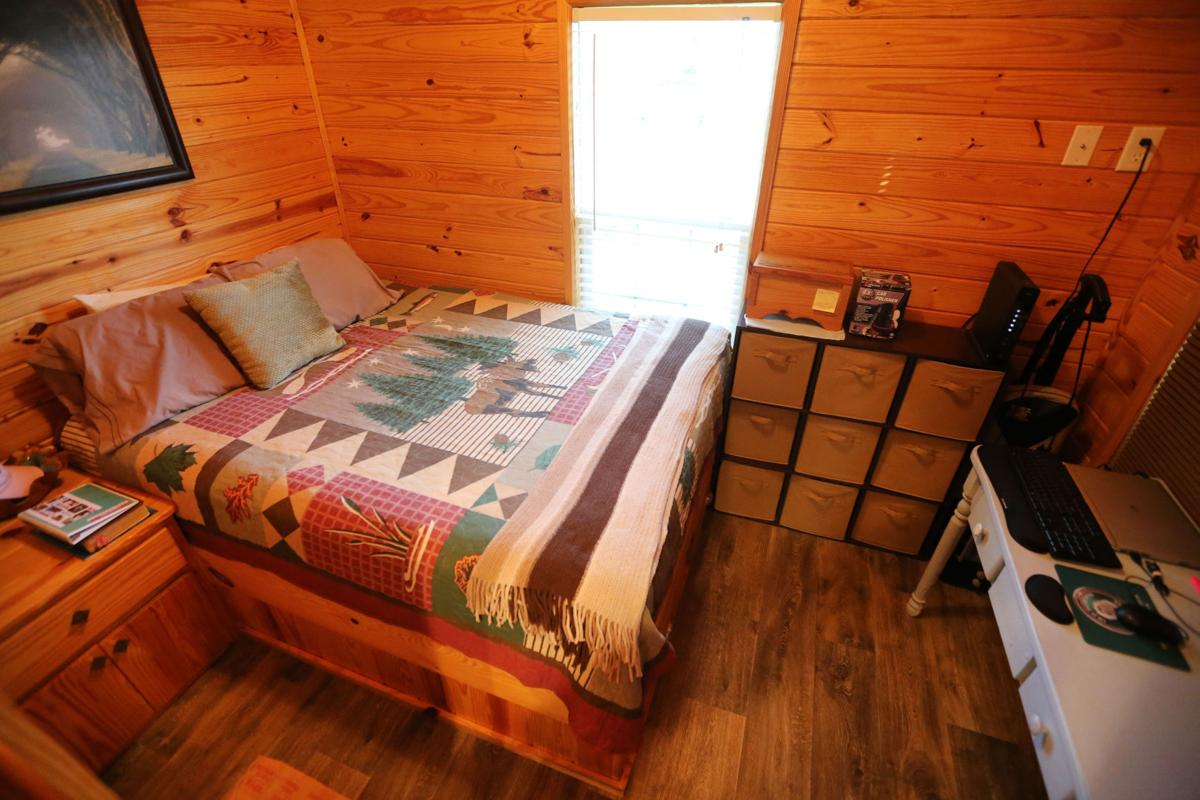 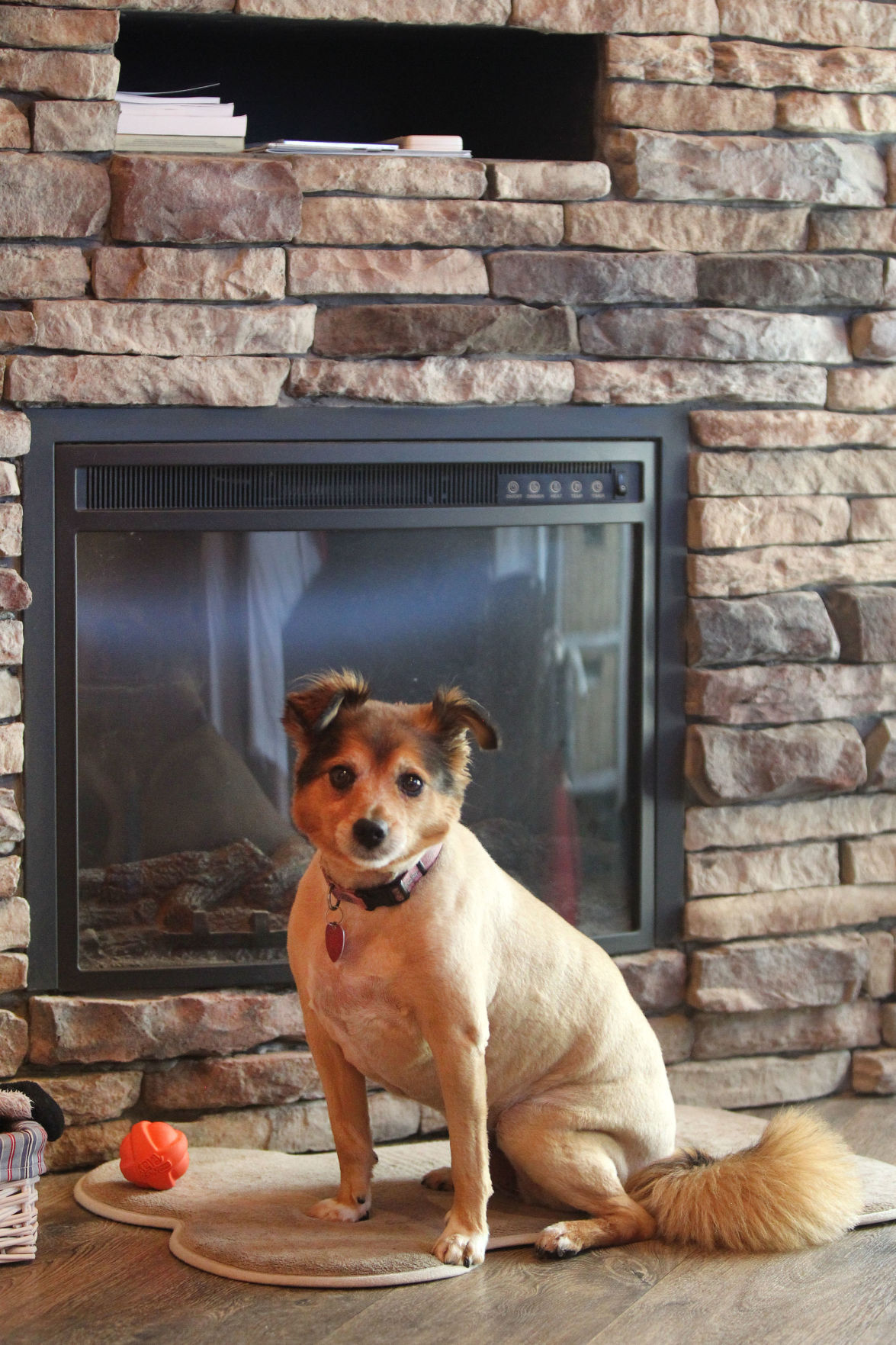 The Edwards’ “baby” is Dharma, a 10-year-old Sheltie mix. 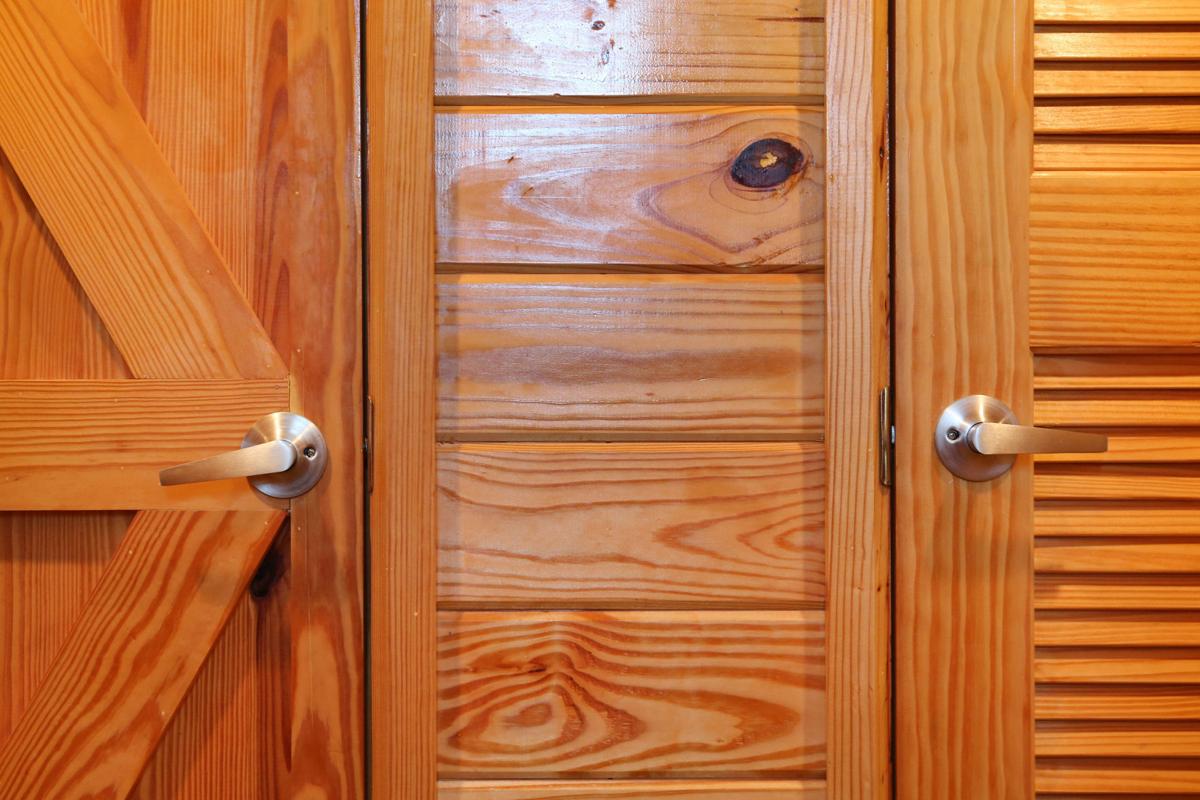 A clothes closet, left, and a laundry closet. 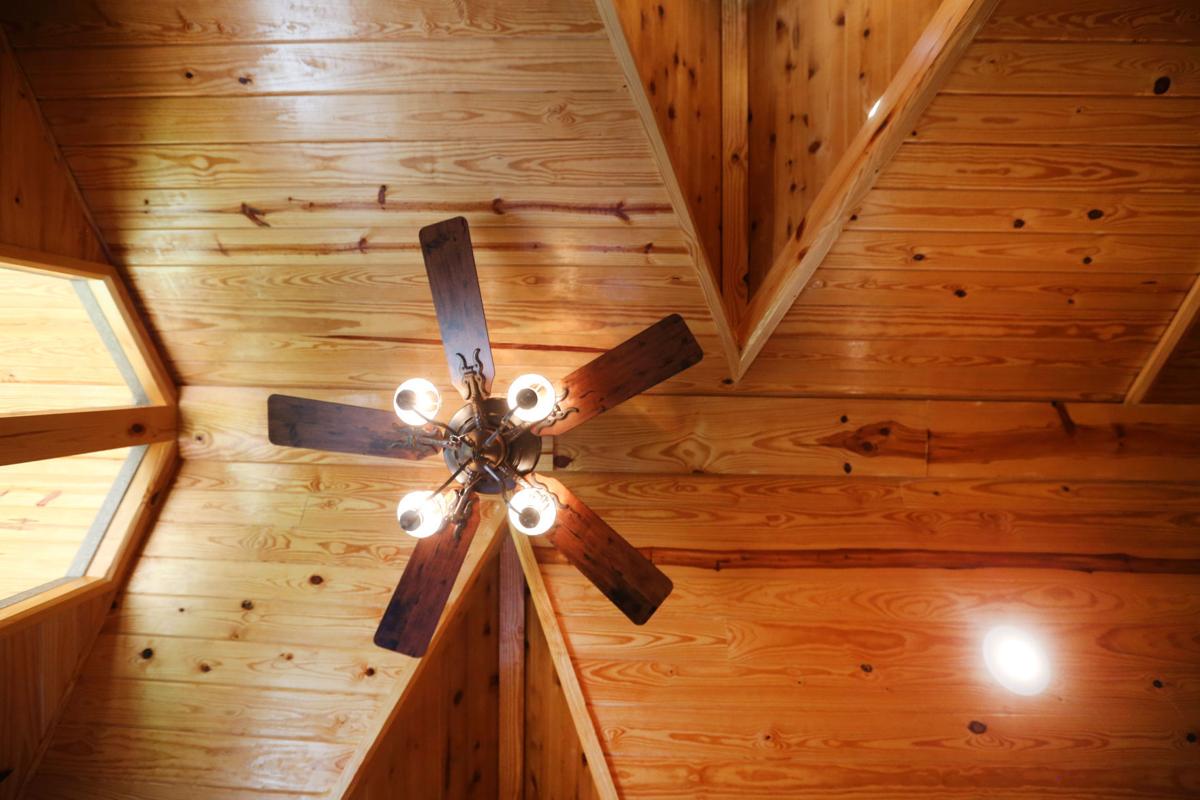 The ceiling in the living area. 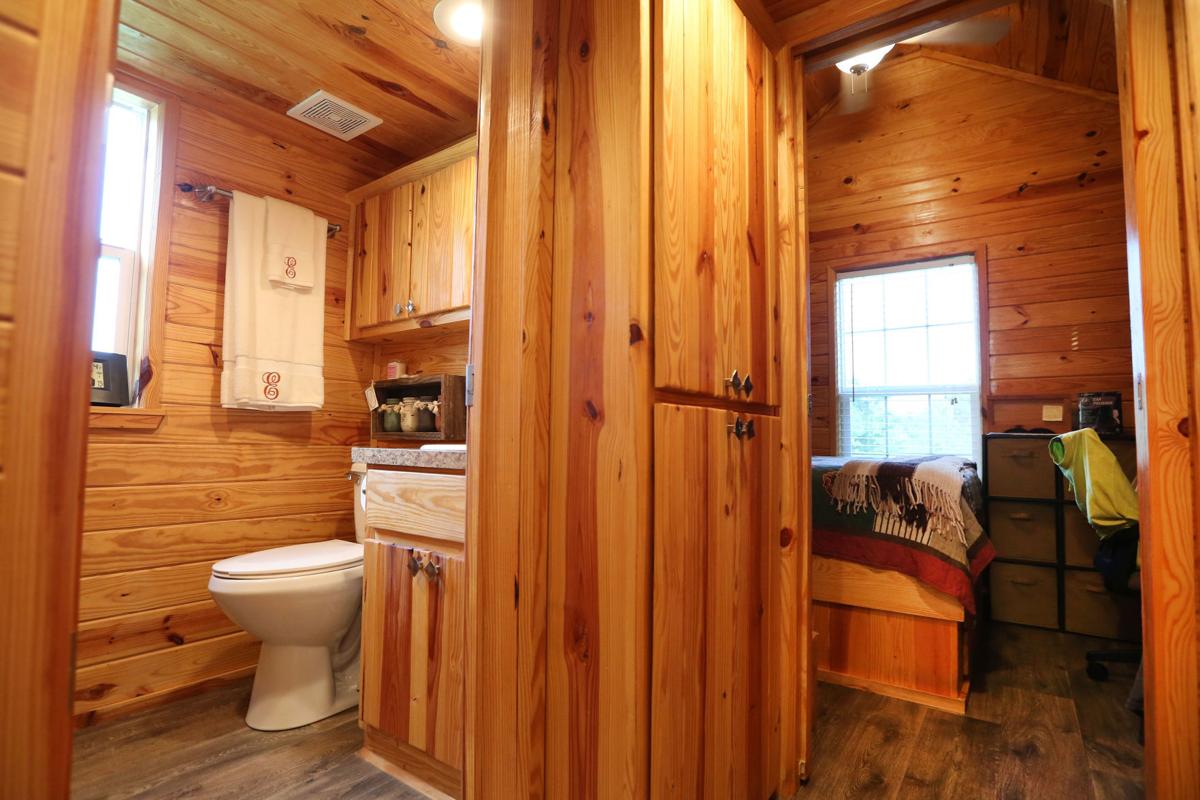 The home’s bathroom has a full-size tub/shower; a guest room holds a queen-size bed. 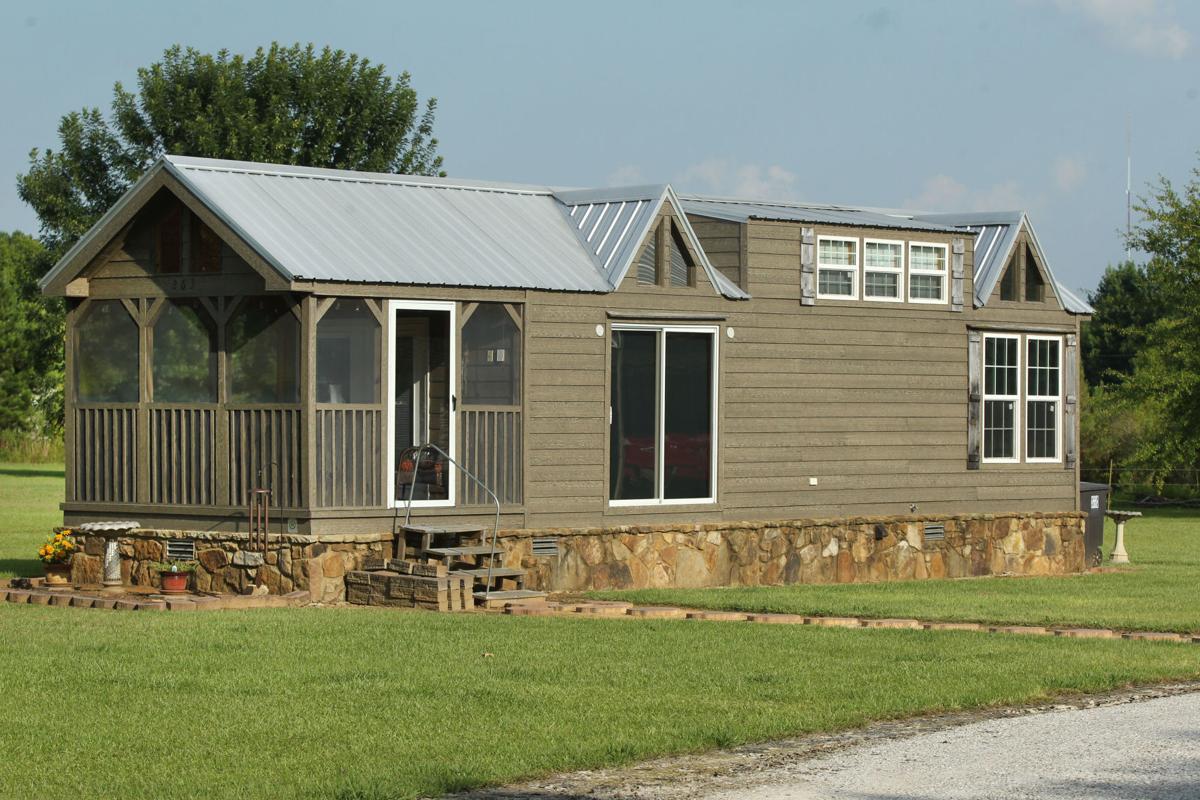 The tiny house, which sits on two acres in Mooreville, has a stone foundation trim.

Jeff and Tammi Edwards of Mooreville moved into their tiny house in the summer of 2016. The 399-square foot home, not counting the loft or screened porch, sits on 2 acres.

A screened porch strung with Edison lights is the perfect cozy spot at night.

The Edwards’ “baby” is Dharma, a 10-year-old Sheltie mix.

A clothes closet, left, and a laundry closet.

The ceiling in the living area.

The home’s bathroom has a full-size tub/shower; a guest room holds a queen-size bed.

The tiny house, which sits on two acres in Mooreville, has a stone foundation trim.

MOOREVILLE • Five years ago, Jeff and Tammi Edwards were living in a 2,000-square-foot home in Mooreville’s Crossridge Circle subdivision. It didn’t take them long to figure out they had way too much house for two people and a dog.

When the subject of downsizing came up, they agreed they should look into finding a tiny home.

“I decided I didn’t need that big house to be happy,” Tammi said. “And we’d been watching TV shows like ‘Tiny House Living’ and ‘Tiny House Nation.’”

In early 2016, the Edwardses hired a company called Rustic River out of Hamilton, Alabama, to build their wee abode (the company is no longer in business).

“We had them add a screened-in porch so we could sit outside at night and not get eaten up,” Jeff said. “One of the things that really sold us on it was when we went to the factory while it was being built and we saw they had put screens under the porch floorboards so no bugs could get in through the cracks.”

Jeff said it’s his understanding that in order to be considered a tiny home, a structure has to be less than 400 square feet. Their home is 399 square feet; if you add the loft and the porch, it comes in at 550. The house sits on two acres of land.

“We were told we were the first ones here to have a tiny house that’s actually lived in,” Jeff said.

The downstairs features a living area with a dual central heat/air wall unit, and an electric log fireplace surrounded by stone. The kitchen has a full-size sink, stove, microwave and refrigerator.

“There’s no dishwasher, but Jeff will tell you he married the dishwasher,” Tammi said.

A hallway has a bathroom with a full-size tub/shower and a pantry on one side, and a clothes closet and laundry closet on the other.

The downstairs guest bedroom with its pocket door has a queen-size bed and a home office. The master bedroom with a king-size bed is in the upstairs loft.

The floors downstairs are luxury vinyl tile and the stairs and loft are carpeted. All the wood in the home is tongue-and-groove pine.

“When the company moved the house here, they told us it weighed between 23,000 and 24,000 pounds,” Jeff said. “And now we’ve added stonework around the bottom of it, so it’s no longer mobile. It’s here to stay. We bought it to live in, not to travel in. Some people do travel in them.”

There are just a handful of things the couple misses about having a larger home – being able to stand up when they get out of bed, not having a second bathroom, the lack of a dining table.

One thing they don’t miss is a big mortgage payment every month.

“When the pandemic hit and people were losing their jobs, we didn’t have to worry about that ginormous mortgage,” Tammi said.

“And now that we don’t have that big mortgage, we can pretty much buy whatever we want to,” Jeff said. “But really, it doesn’t take much to satisfy us. We’re simple people.”

That simple lifestyle was part of the allure of tiny-house living. When they got ready to downsize, the couple filled three pickup beds with home furnishings and donated it all to Broken Lives Ministry, a faith-based addiction program for men now located in Nettleton.

“We had towels, cookware, clothes with the tags still on them, vacuum cleaners, furniture, lamps, pillows, bedding,” Tammi said. “It was very freeing to give stuff away.”

“We learned how much we could live without,” Jeff said. “It was almost like an addiction. The more we gave away, the lighter my load got, the better I felt.”

In the tiny house, everything has a place because space is at a premium.

“I always joke that when we first moved in, we were sitting on the love seat and I was moving around and Tammi said, ‘What are you looking for?’” Jeff said. “And I said, ‘My other sock, but the good news is it can’t be too far away.’”